There’s a lot of new venues popping up that claim to do everything in one space.

But this one’s on the level.

In fact, it’s on 7 levels, having sprung up in the underused car park underneath Frank’s Café and Campari Bar in Peckham. Appropriately, it’s called Peckham Levels, and it’s a multi-faceted cultural, community and events space (with food and drink spots to boot), settling in for the next six years.

Here’s what’s going down (and up)… 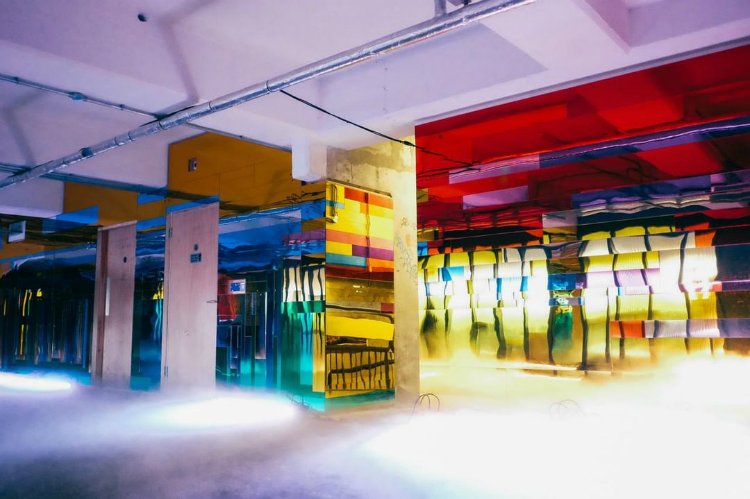 The top two levels of the multi-storey are the most public-facing part of the building, with three street food traders – contemporary Kurdish from Nandine; regional Chinese street food from Hao Hao Chi; and chicken purveyors Other Side Fried – a craft taproom, Lady Godiva, put together by the team behind Made of Dough; aaand the Near & Far cocktail bar (from the Old St. Magic Roundabout people). There’s also a hair salon, a yoga and wellness centre, and spaces for public exhibitions and live music nights – most of which come courtesy of the artists on…

The middle of the building is home to artists, makers and creatives (with at least three quarters being Peckham locals), thanks to top-notch craft, art and music studios, dark rooms, co-op working spaces and affordable studio and rehearsal space as part of a local access initiative. You can even drop in to the open access ceramics, photography and screen printing facilities. Head below that, and you’ll find…

The lowest level of the carpark opens onto the surrounding alleyways, and it’s here that you’ll find a marketplace, selling everything from fresh fruit and veg, to craft stalls run by the resident makers, all supporting local merchants.

…As well as the building itself.

NOTE: Peckham Levels is open daily from 10am-11pm (1am Thurs-Sat). You can find out more on their website HERE.