The Best Bars In King’s Cross

WE WRITE ALL OUR JOKES IN CAPITALS.

THIS ONE WAS WRITTEN IN PARIS.

And on returning from our writing sojourn across the channel, we took the opportunity to size up the bars, restaurants and shops that have suddenly sprung up around King’s Cross.

With the recent unveiling of the swooping new development Coal Drops Yard, next to the fountain-filled Granary Square, King’s Cross – once merely a travel hub for students, businessmen, and children pushing trolleys with owls headfirst into platform pillars – has become a food and drink destination in its own right. Restaurants in the area now include renowned tapas bar Barrafina (whose central London sister boasts a Michelin-star); Assaf Granit and Tom Dixon’s critically acclaimed Coal Office; Casa Pastor and Plaza Pastor; as well as many more.

All of which you should definitely visit…after an aperitif at one of the below bars. 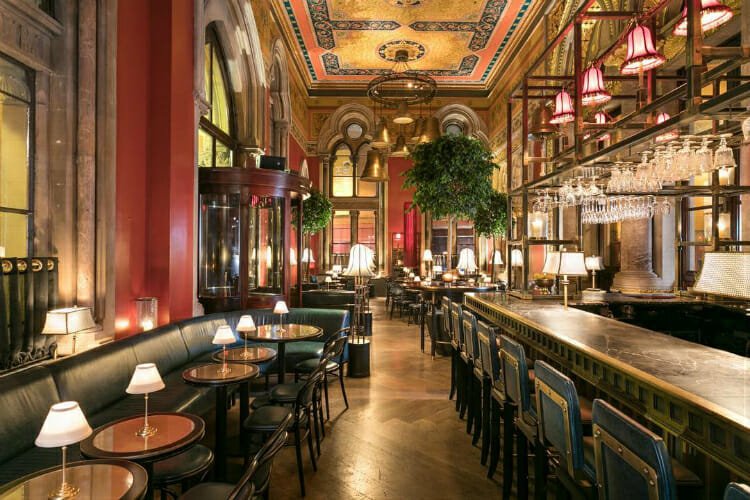 Housed in a jaw-droppingly beautiful 19th century room in the grand, gothic revival hotel by King’s Cross station, George’s Bar is the liquid counterpart to the neighbouring restaurant, also overseen by Michelin star-winning chef Marcus Wareing. Beneath a glittering mosaic ceiling and giant church bell chandeliers, you can score botanical-leaning cocktails like The Herbalist – with thyme-infused gin, green Chartreuse, elderflower and absinthe – while snacking on charcuterie, crispy whitebait and parmesan arancini. 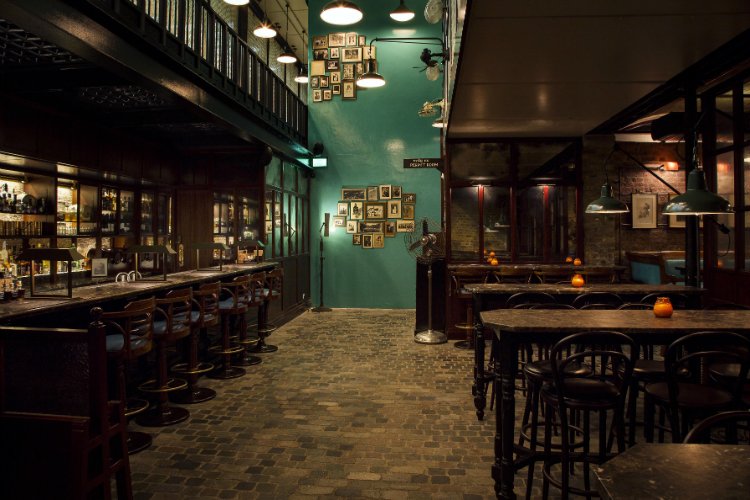 Head down to the basement of Dishoom King’s Cross and you’ll find The Permit Room, a dimly-lit subterranean bar made up of cobbled floors, dark bentwood stools and marble tables, and enough vintage lighting, photographs and hand-painted signage to take you back to the 40s. It gives a nod to the introduction of Bombay’s Prohibition Act in 1949, when alcohol was banned except for those carrying a medical permit. Here, however, you can freely sip on their selection of Pens & Paanch; Slings, Coolers & Fizzes; and Sours & Fancies with fervour. It’s table service too, which means no cramming and queuing at the bar. Instead, your drinks will be delivered to your table, alongside a selection of Bombay-inspired snacks, should you permit. 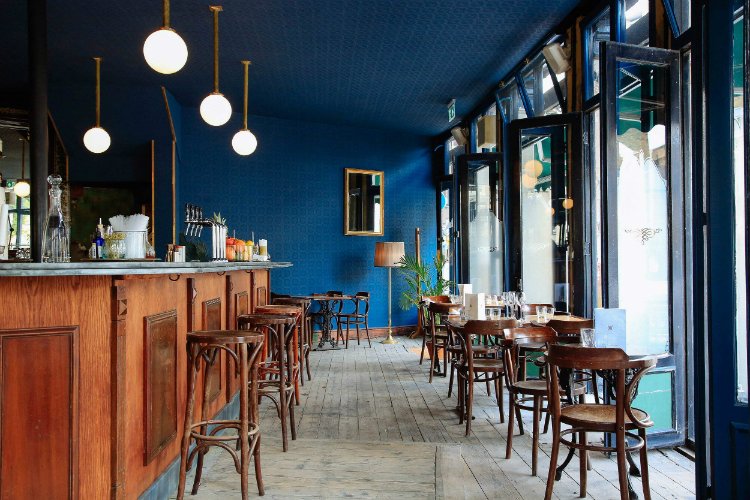 Racketeers may be fraudulent businessmen, but you won’t be cheated out of anything at this shabby chic cocktail bar and bottle-shop, with a basement dancefloor and a secret walled garden out back. For the most part they serve cocktail classics with a twist, although there’s also a small menu of wines and a few beers on tap, all of which you can sip with a side of charcuterie and/or cheese. Bottle-shop wise they sell wine – mostly from small producers – and craft beer, which they’ll happily wrap up for you to smash back at home. 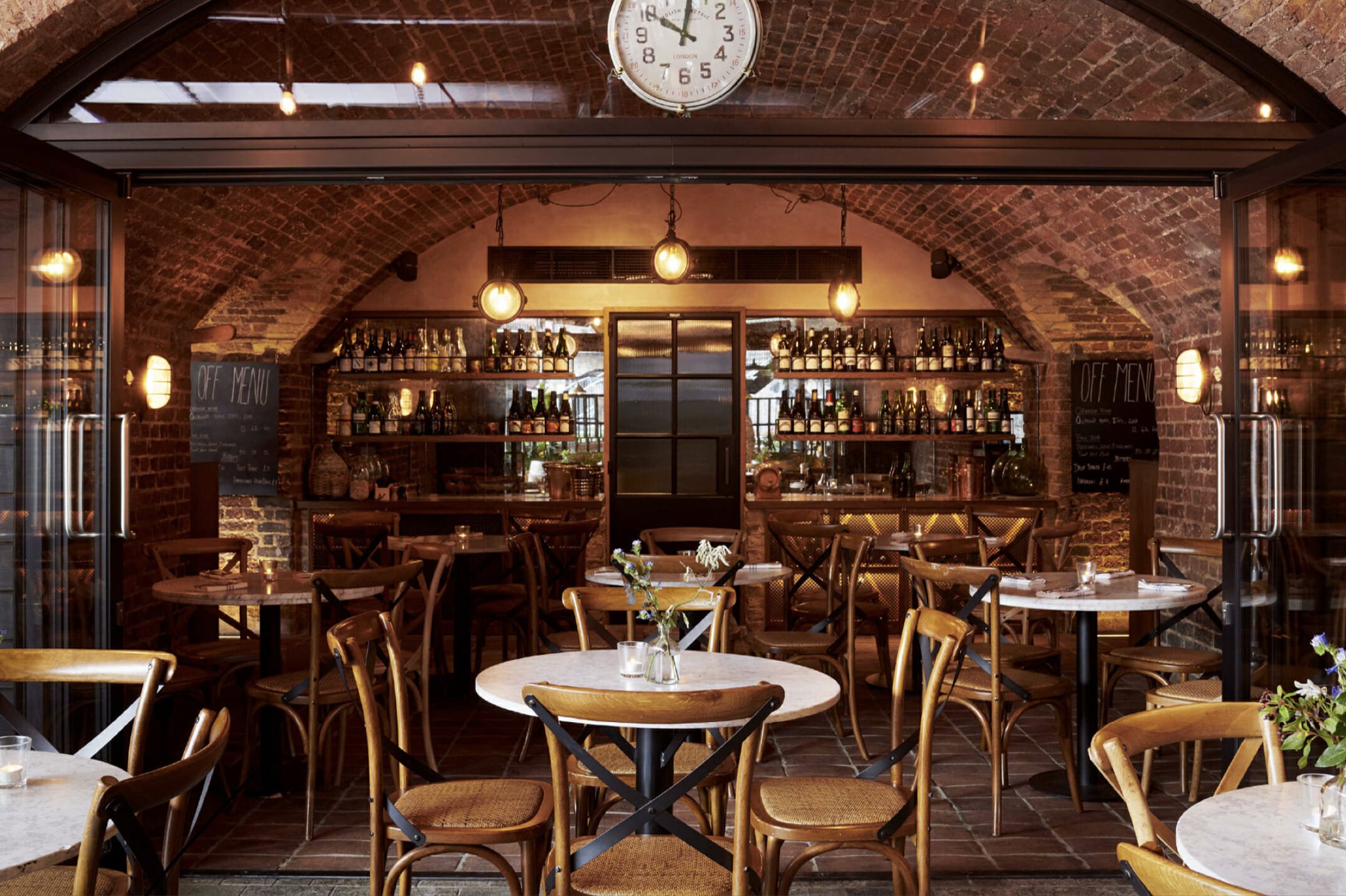 It’s the Hart brothers’ answer to the mic drop; not their first, or second, but their fourth venue in King’s Cross’ brand new development Coal Drops Yard. And, whilst the other two (Barrafina, Parrillan and Casa Pastor) are spin-offs of already existing (and undeniably amazing) restaurants, this one’s a first: an intimate wine bar set up in one of the development’s railway arches, focusing on delicious wines at all price points, with some British bar fare on the side. 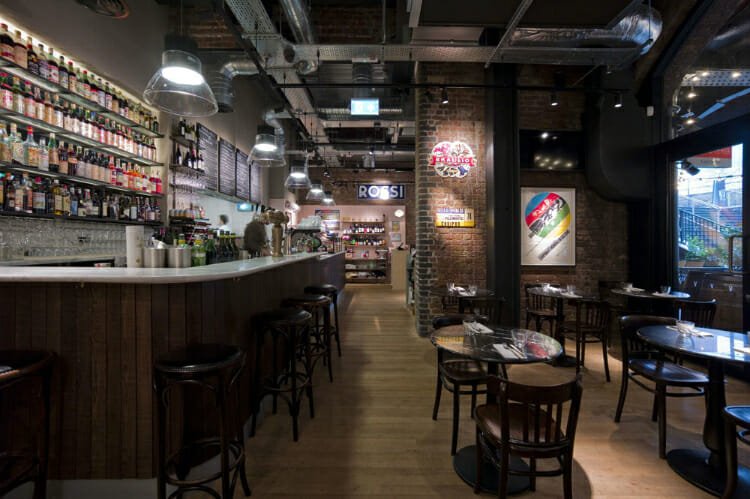 Vermouth and cycling. Apparently, they’re two themes that work well in tandem. This bar in Coal Drops Yard is a cosy, brick-walled space with a terrace for the warmer months and vintage posters of aperitif spirits and cycling competitions plastered across the walls. The drinks here are suitably focussed on vermouths (both on tap and by the glass), americanos, amaros and bitters, as well as cocktails combining them – but there’s a solid wine and beer list, too. Pop by for a couple of dishes in the evening – since chef Anthony Demetre co-owns the place, it’s a stellar line-up. READ MORE. 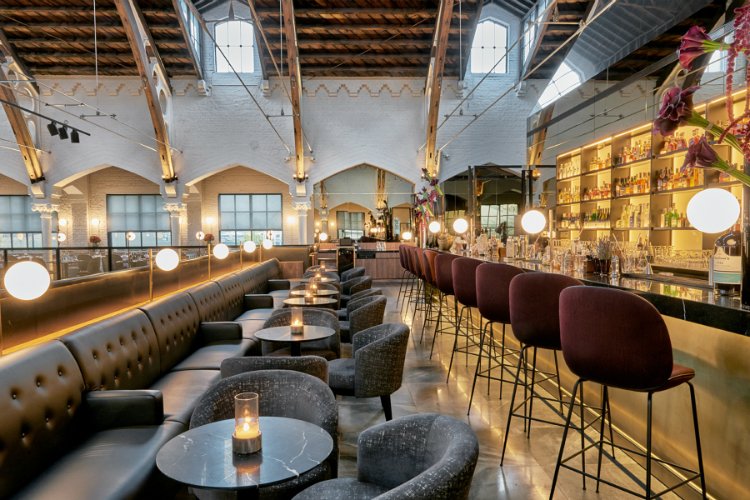 This lofty bar and restaurant opened in London’s first purpose-built gymnasium hall back in 2015. And it worked out. Perched up on the mezzanine, the gold-hued Meister Bar serves up some of the most unusual cocktails in the area. Currently, the menu’s inspired by iconic works of art, so sip on liquid versions of Magritte’s Ceci n’est pas une pipe with mint chocolate-washed Laphroaig whisky, Portuguese liquor and pine; or the Gyotaku, an homage to Japanese fish prints with smoked salmon-infused aquavit, tarragon tonic, sherry and peat spray. 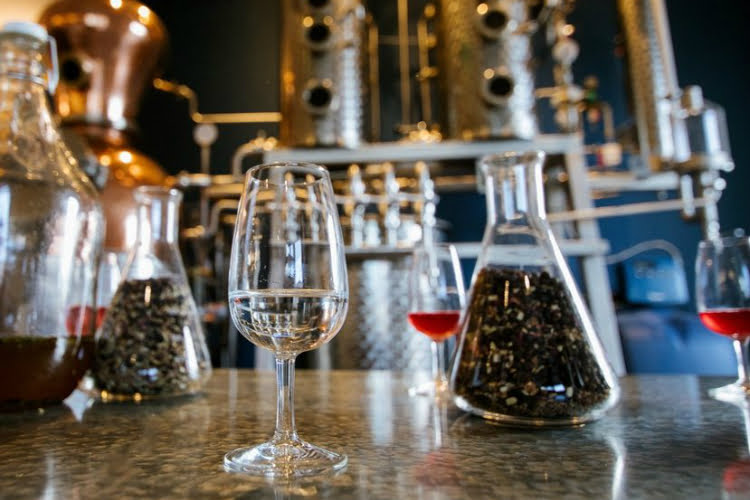 A canalside gin distillery set in an unusual, semi-circular building behind the cast iron pillars of a former gas works. It’s a new venture from the English wine growers Chapel Down, who are now infusing the skins of their grapes into craft gins and vodka. Naturally you can prop yourself up at the bar and order a couple of cocktails and G&Ts – or book in for one of their al fresco tastings and masterclasses. 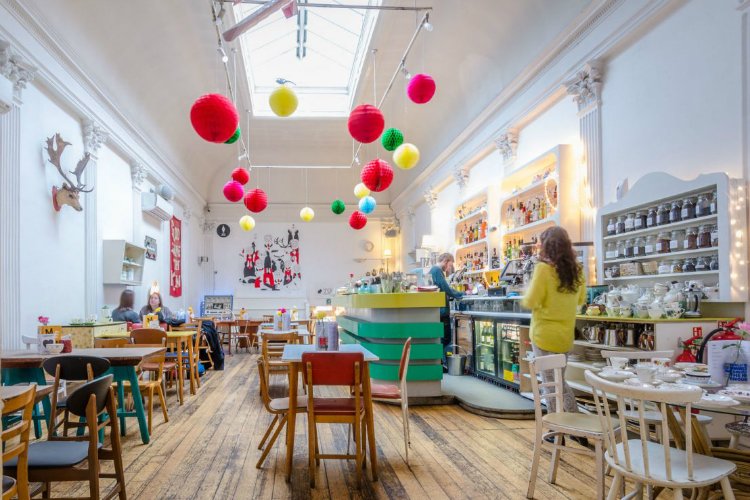 If you’ve ever fancied having a go at crafting Lionel Richie’s face out of a rich tea biscuit, this bar is for you. As well as a drinks list offering everything from cocktails and sharing cocktails, to shooters, beer and wine, they’ve got a week long schedule of activities – most of which are free – including a ‘Papier Mache Monster Mache’ and shaping superstars out of clay. They’ve also got a pretty sweet happy hour Monday-Friday, 4-7pm which sees £2.50 beers and cocktail jug specials, meaning if you drink wisely you’ll leave feeling pretty richie too. 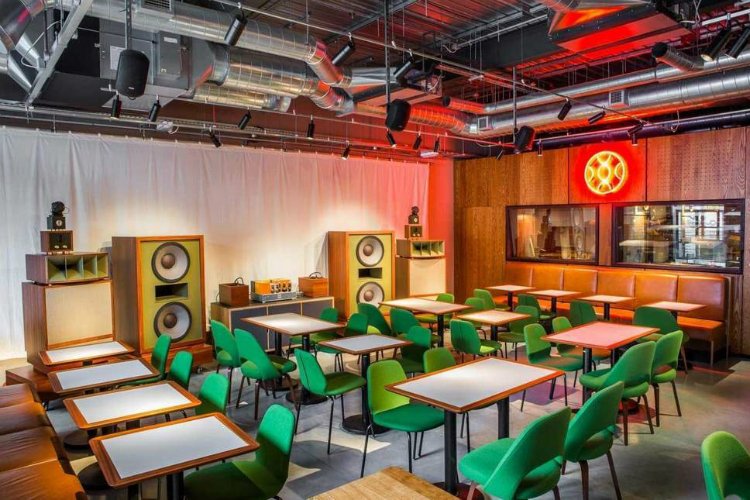 You wouldn’t be blamed for imagining a bar called Spiritland to be a little sheet…You would however be wrong. Not only is it an undeniably handsome space – a retro-inspired mix of caramels and lime greens – it’s also home to a world-class, multi-million pound sound system, from you which can enjoy an all-week music-focused programme of talks, gigs, albums launches, and sets by world-renowned DJs (as well as the day to day playlist of handpicked instrumental).  Somehow they still have time to focus on the food and drink, with an excellent all-day food offering spanning breakfast, weekend brunch, lunch and dinner, as well as a drinks menu full of softs, cocktails, sake, beer, wine, and….spirits. 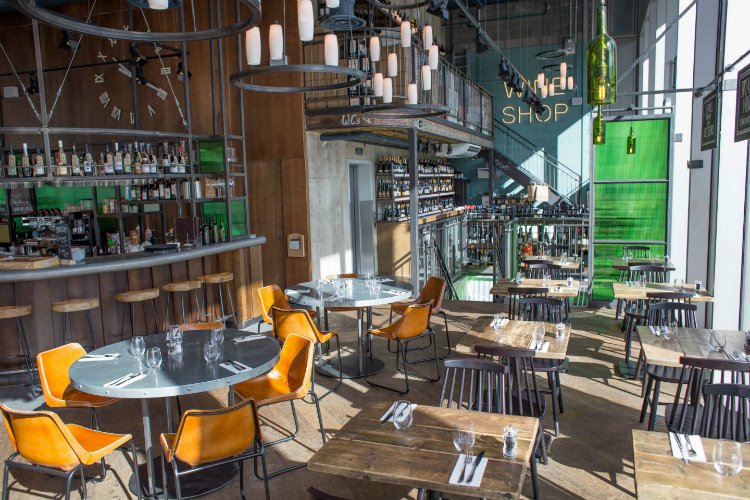 As the name suggests, these guys have got all the tekkers necessary to pick a great bottle of wine, constantly keeping their 200-strong wine-list fresh with the best grapes. You can order by the bottle, or there are plenty available by the glass, both of which you can enjoy alongside a few dishes from their daily-changing menu, mostly focused on British fare. 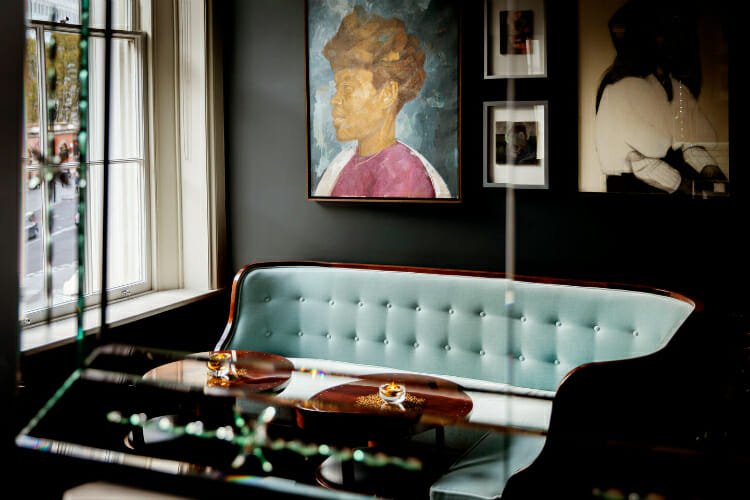 As a hotel bar in King’s Cross, the caveat here is that you might find yourself with a couple of businessmen for company.

But sometimes, it’s a good idea to follow suit.

Especially when they lead you into a very dimly lit, coal-black martini lounge where you can personalise your order not just with the gin or vodka of your choice, but your vermouth, too. There are five more playful variations on the martini if you’re not too partial to the original, as well as classic cocktails (the good kind: martinez, gimlets and gibsons).

Liked this? We’ve written a guide to the Best Bars In Shoreditch too.

The Best Afternoon Tea In London, For Every Budget Yes we’ve ventured into London’s most distinguished hotels, grand cafés and secluded courtyards to find the city’s finest Afternoon Tea.

The Ultimate London Brunch Guide Ever since our planet’s greatest scientists first discovered a meal between breakfast and lunch, no weekend morning has been complete without it. So we’ve updated our guide to the best in London….

Fun Restaurants in London For the times when you require singing waiters, absinthe fountains and acrobats.