Opening an ice rink is a slippery slope.

Soon enough, you find people carelessly frolicking the night away in thick winter coats, scarves, gloves, beanies and ear muffs, before retiring for a glass of mulled wine. Which, on reflection, isn’t that bad. So here are the best spots for ice skating in London…
– 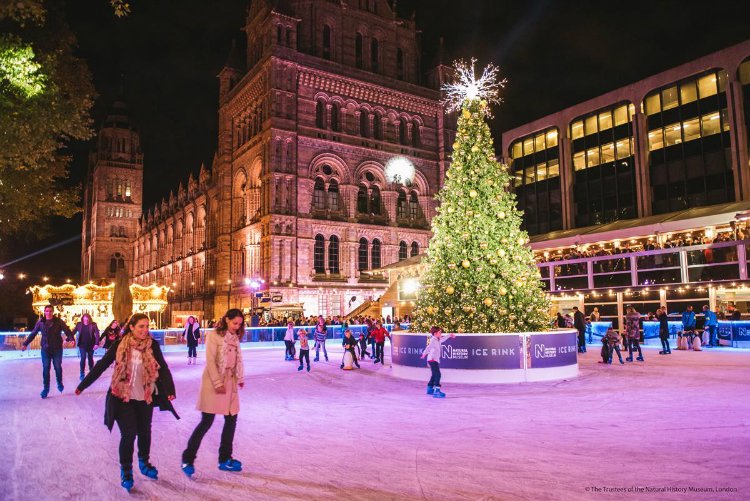 The NHM rink has reopened for its 14th year. Its magnificent museum backdrop will, as usual, be accompanied by a rinkside cafe and bar to fulfil all your hot beverage needs. It will also, unlike usual, have a 30ft Christmas tree slap bang in the middle of it… 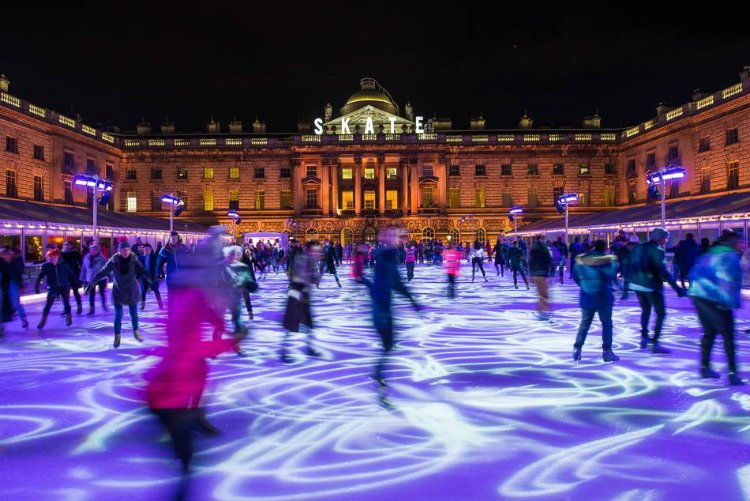 It’s the ultimate ice rink, with beautiful surroundings, DJ nights and a pop-up Fortnum & Mason with tea caddies, hampers and stocking fillers. Pop into the F&M Lodge, and you’ll also find cocktails, fondue for two and welsh rarebit. And this year, they’re repeating Skate Lates for ice-capades that go on into the wee hours – including a 24-hour skate on 7th December. 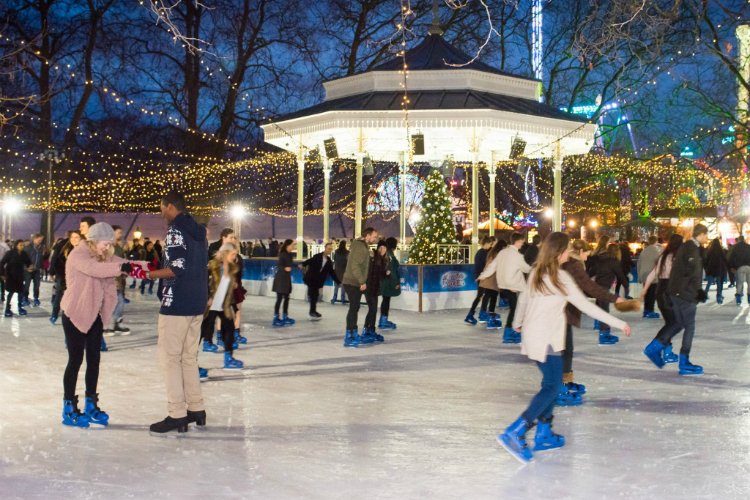 The largest rink for outdoor ice skating in London, built around a Victorian bandstand centrepiece which will host live music to speed you on your way. The ice is illuminated by more than 100,000 lights – but then, frankly, anything less would be an embarrassment to London’s most twinkly festive pop-up. 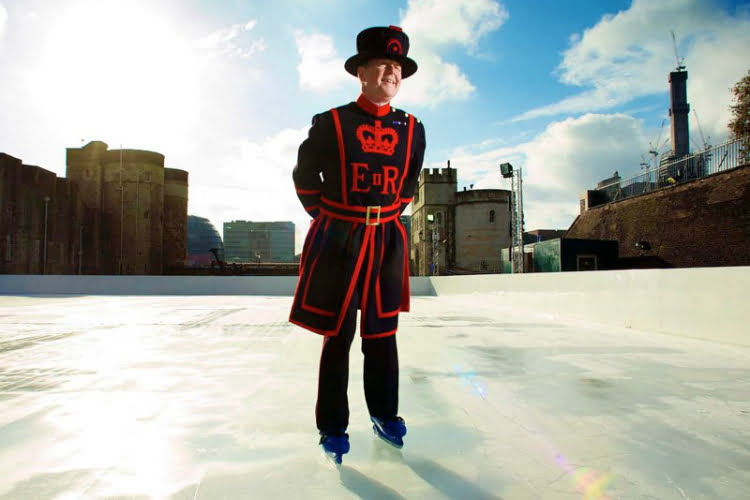 The Tower of London ice rink’s impressively nestled within the moat, so you can skate as the Tudor royals might have done, only without the unnerving risk of breaking through the ice. 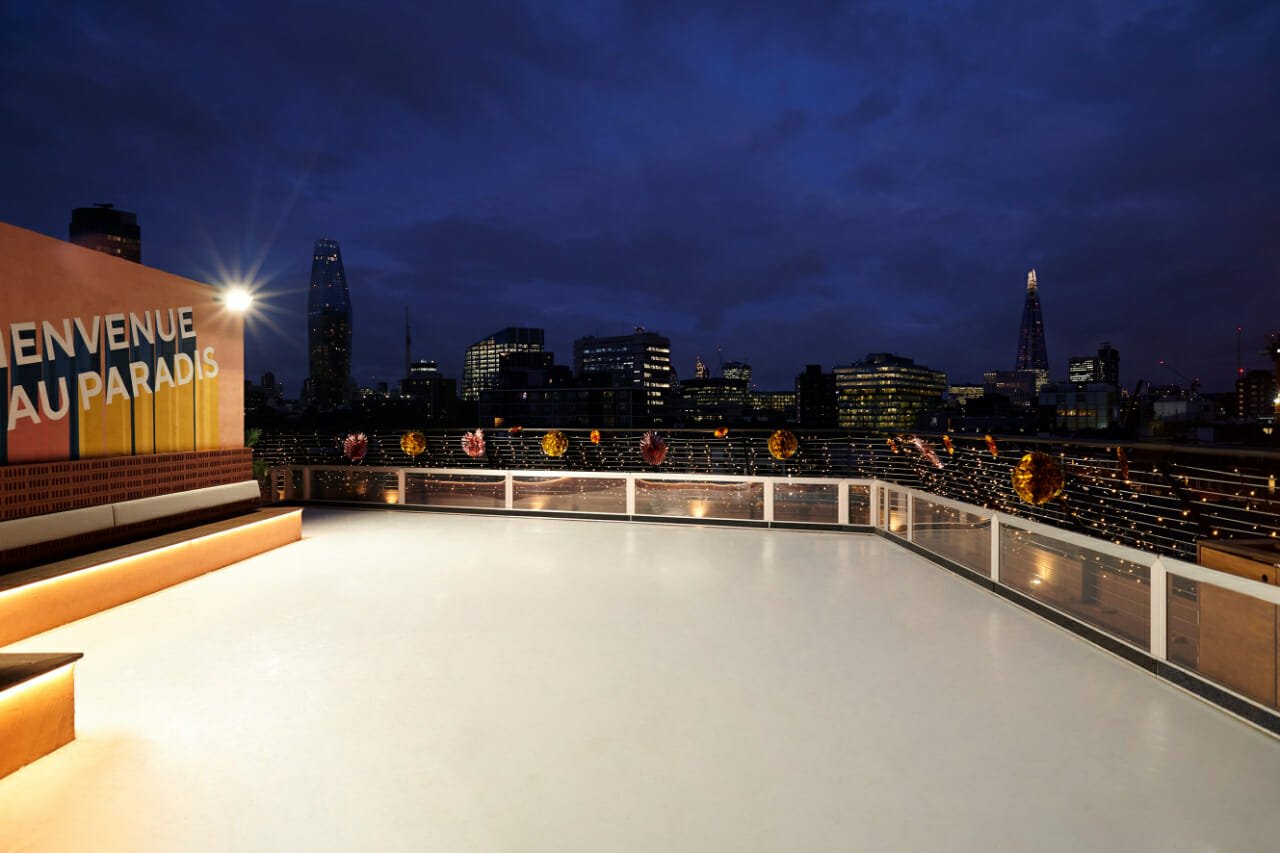 Bar Elba is named after a Mediterranean island with white sand beaches and scorchingly hot summers. It’s not the first place that comes to mind when you think about ice skating. But nevertheless, Bar Elba now has an ice skating rink & a pair of curling lanes on top of it… READ MORE 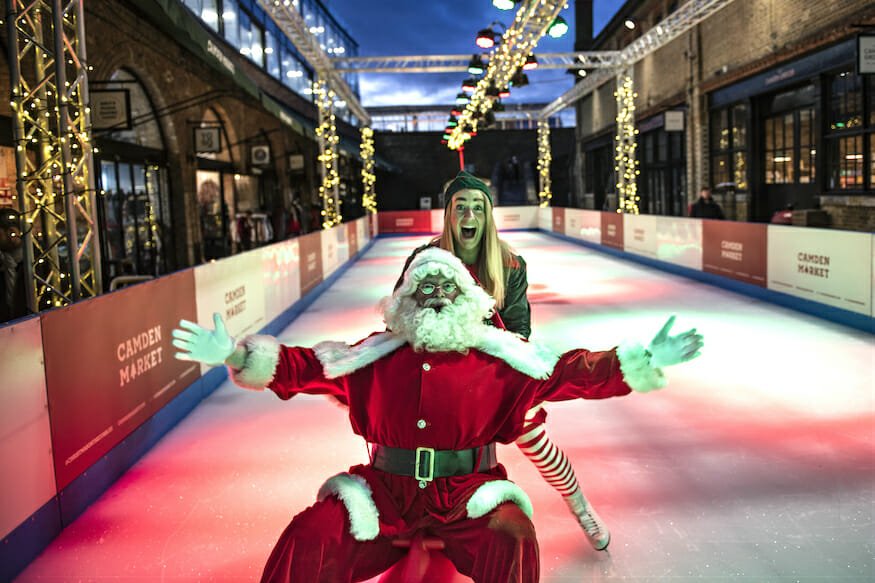 Camden’s cobbles can get pretty slippy in winter anyway… so now they’re going the whole hog and installing the city’s longest ice rink (at 25m) amidst the atmospheric old buildings of North Yard. It’ll likely be quite narrow, so factor that in – but it’s also set right next to the bustling canalside street food market, which makes for a very nice après-ski spot. 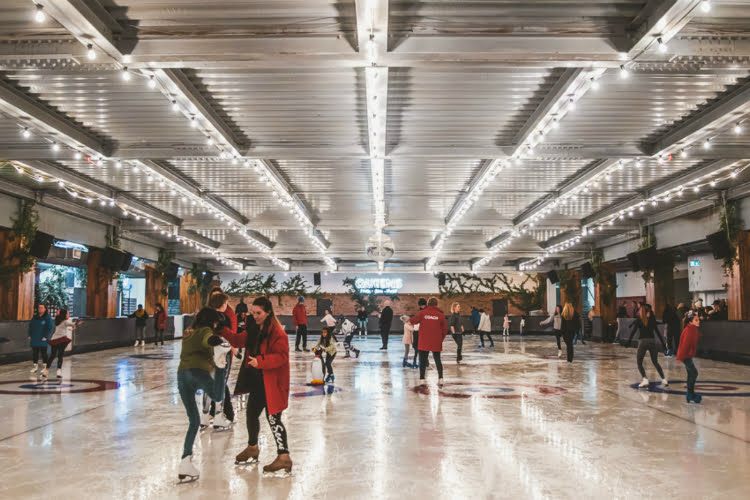 Arguably the venue’s biggest draw, it’s one of just a few places for ice skating in London that’s open year round. It’s a huge space – almost the size of two football pitches – overlooked by a bright, festoon-lit ceiling, and a buzzy rink-side bar/restaurant running its whole length. Here you can get your skates on for an hour or two, or follow the professionals with classes in skating, hockey and er, curling. 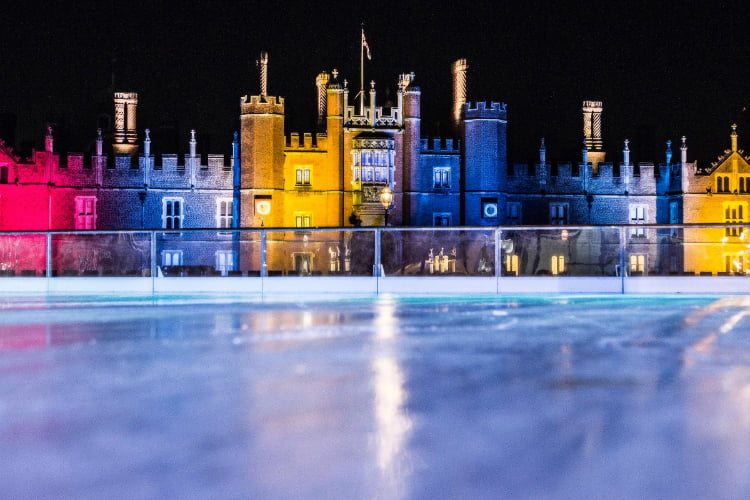 If Henry VIII hadn’t been so mercilessly riddled with gout, no doubt he would’ve enjoyed a spin on the ice rink now perched outside his majestic abode. The mandatory mulled wine and mince pies can be found at the nearby cafe, alongside other delights of the palace grounds, including a cracking maze. 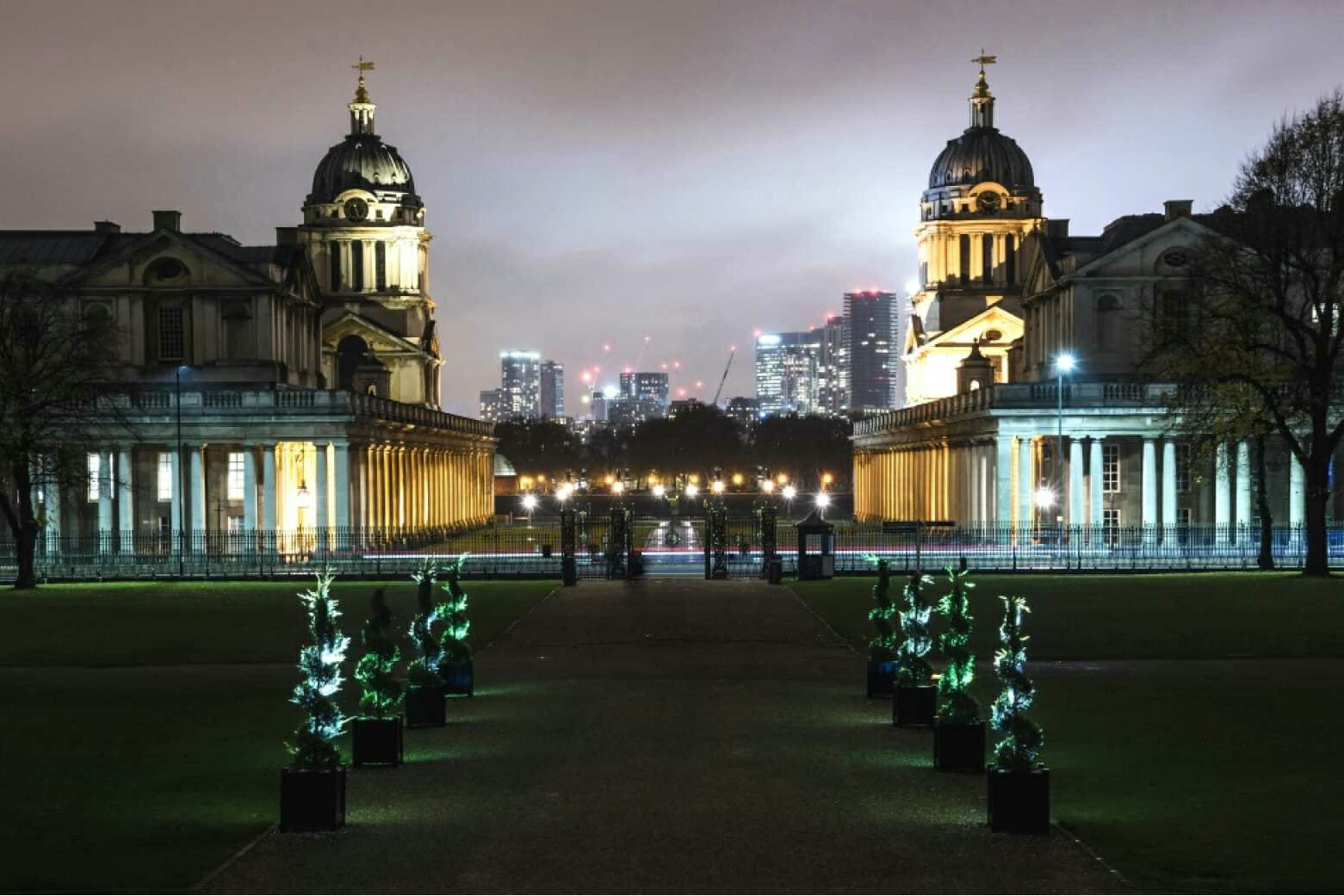 Just to be clear, ‘the Queen’s House’ doesn’t actually mean Buckingham Palace. It’s a grand, former royal mansion in Greenwich – and this year, it’s getting an ice rink for the first time. Somehow, it’s the only open-air rink in South London, and it’s set amidst UNESCO World Heritage buildings and stunning views of the city. 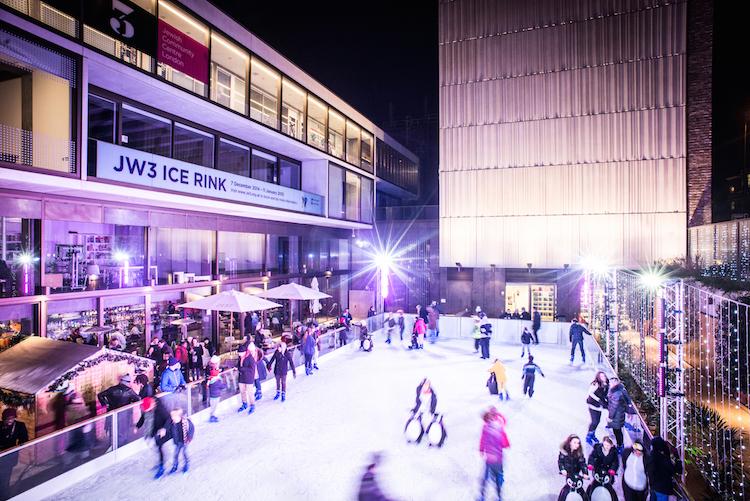 JW3’s piazza is transformed every year to become home to their ice rink, which is surrounded with warming seasonal food, mulled wine and hot choco. It’s also open on Christmas Day and New Year’s Day. 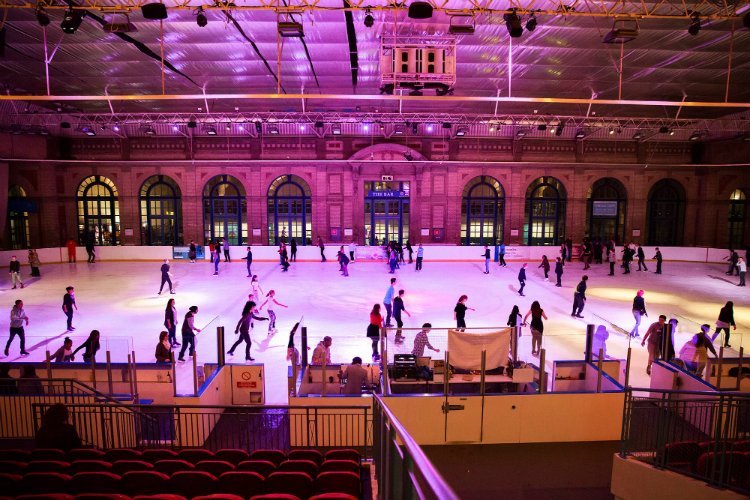 One of the other few London ice rinks open all year round (it’s where the Dancing On Ice stars train), Ally Pally steps it up a notch around the festive season, and this year it’s hosting ice discos every Saturday. 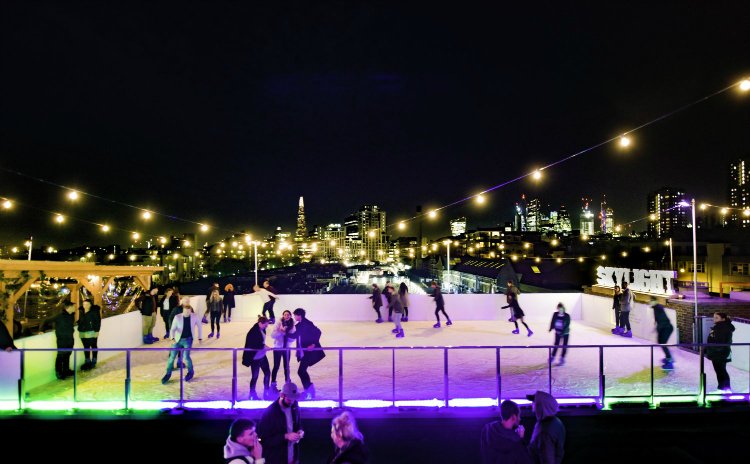 …because they’ve added a real rooftop ice rink to their covetable spot atop a Wapping carpark (with unobstructed views of London’s finest stretches of skyline). And they’re throwing in cocktails, street food, igloos, slap shot hockey, and DJs just to top it all off.