Winter Light Trails You Can Still Book For This Year

Looking for the best winter lights in London this season, all of which are available to book right now, and many of which involve a spectrums-worth of LEDs, lasers, strobes, floodlights, holograms, interactive displays, and other such modern wizardry?

Allow us to illuminate you.

Here are all the best winter light trails for 2022, from enchanted woodlands to festive lantern shows: 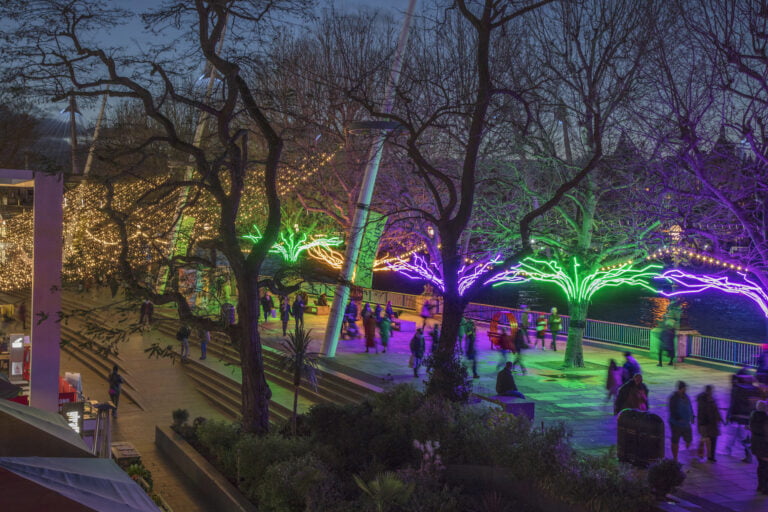 The Southbank Centre’s annual lights trail may not be as much of a showstopper as some of the others on this list. But it is a) free, and b) conveniently close to its riverside Christmas market – meaning that you can take in a kaleidoscopic orb, a boulevard of neon trees and a pair of glowing, rotating rings filled with gas to give the illusion of a giant orb… with a glass of mulled wine in hand. 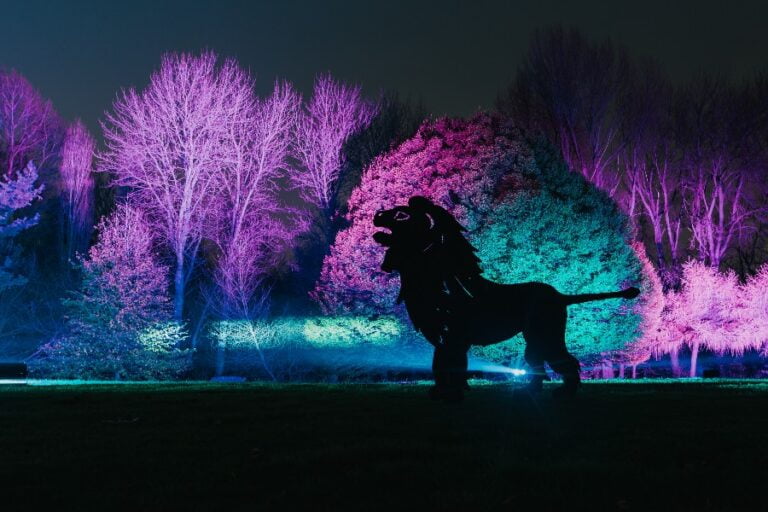 A regular on the winter lights scene for nearly two decades now, Syon’s ancient arboretum and sixteenth century manor house will play host to all manner of lights, lasers, and strobes. All told you’ll see over 400 species of tree decked out in stunning washes of colour, and the highly knowledgeable staff there will be able to tell you all about them…

Christmas at Kew | SOLD OUT 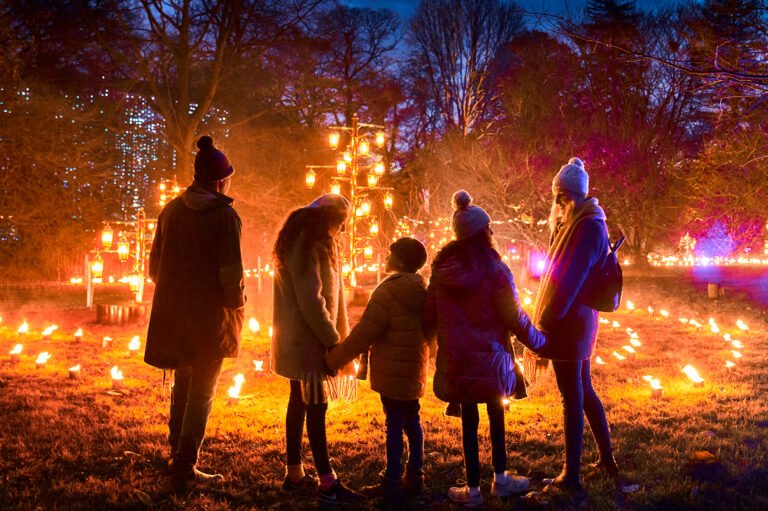 Not happy with merely being the record holder for having the largest collection of living plants in a single botanic garden (it’s official, just ask Guinness), Kew apparently also want the prize for non-living showstoppers, too. Which is why they’ve once again transformed an entire 2.6km stretch of the grounds into an almost unfeasibly magical, after-hours, mulled-wine toting festive woodland light trail. Expect twinkling light tunnels, pillars of light thrown into the sky, and glittering LED-studded installations that sit on a reflective water pool… 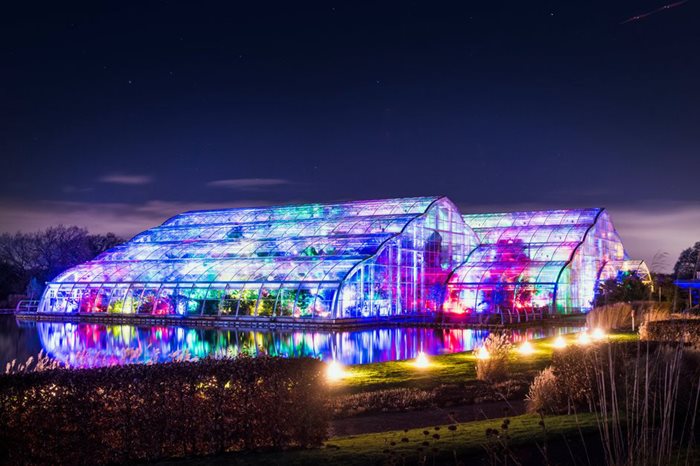 It’s the battle of the South-West London botanic gardens – and Wisley’s matching Kew’s offering this year with fire gardens, fountain displays, colourful lights bathing their trees and shrubs, and a display that makes their conservatory look like a horticultural nightclub. And when your retinas have been sufficiently dazzled, you can stop off at the Christmas market for roasted chestnuts, toasted marshmallows and mulled wine served from festive chalets. 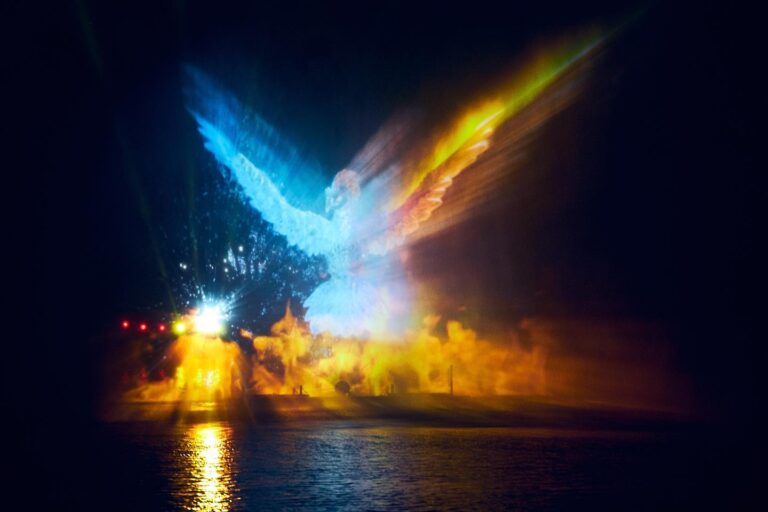 If you’re after a little light entertainment, you’ve come to the wrong place. Because Lightopia has a lot. Like, enough to fill Crystal Palace Park with hundreds of magical lanterns, gigantic installations, and interactive light shows. It’ll hit town for 7 weeks from mid-November, running through Christmas and into the new year. All in all, for the light show part you can expect a 2km path, along which you’ll find a solar-system’s worth of light including a ‘fire breathing dragon’ and a 40 meter wide projection show… Windsor has a Great Park. And this year they’ll be filling it with light for the second year running, with illuminated fairies prancing through the woodland, cathedral tunnels of light, spectacular fountain displays and floating water lilies. Plus, there’ll be a pitstop with mulled wine, hot chocolate, festive food and firepits for toasting marshmallows. 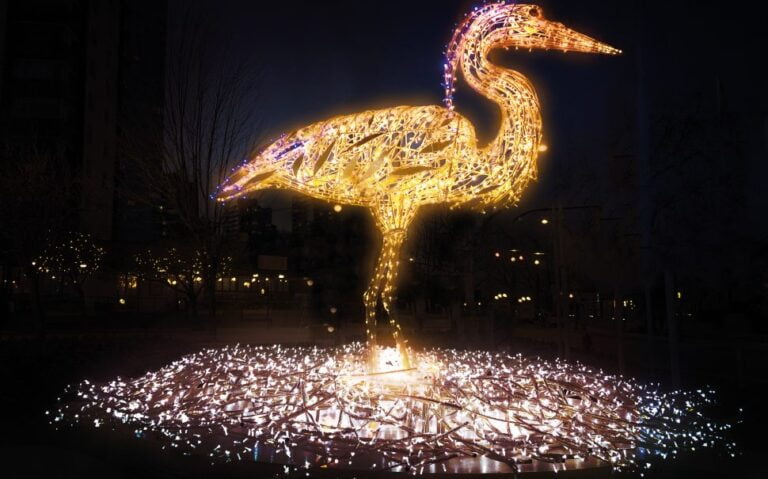 The Illuminature light trail is set in the verdantly wild grounds of the London Wetlands Centre just south of the river in Barnes. A lush, lagoon-strewn 100 acre pocket of rare wildfowl, otters, owls, and more, it’s already pretty amazing during the day – and as the sun dips below the horizon this festive season, it’ll be lined with large-scale, light sculpture recreations of those birds & animals (albeit ones which change colour, talk, and sparkle with animations). Expect light tunnels, ‘watery projections’, interactive light-up lily-pads, and more. 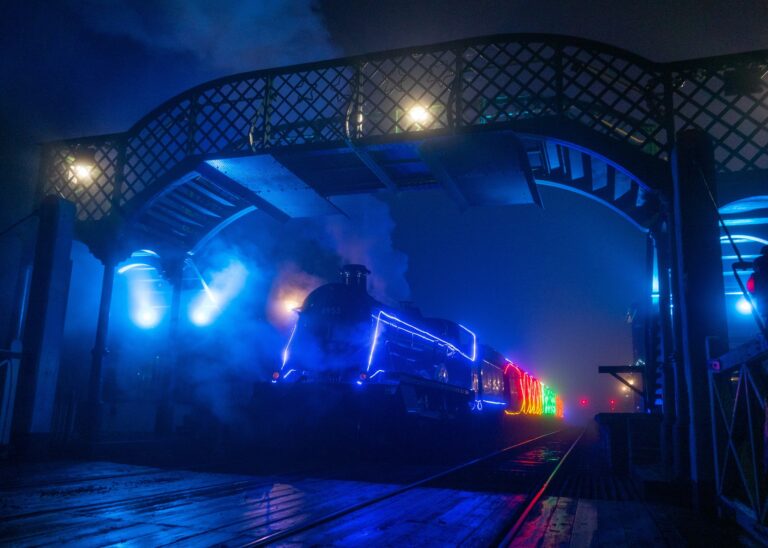 This is miles apart from your typical London light show. Partly because it will literally take you through a fair few miles of countryside on a festive, light-bedecked steam train, but also because it steps things up on that journey with a Christmassy soundtrack, line-side light displays set in magical forests, and a mystical Scandinavian gnome.

The Ever After Garden | Walk-in 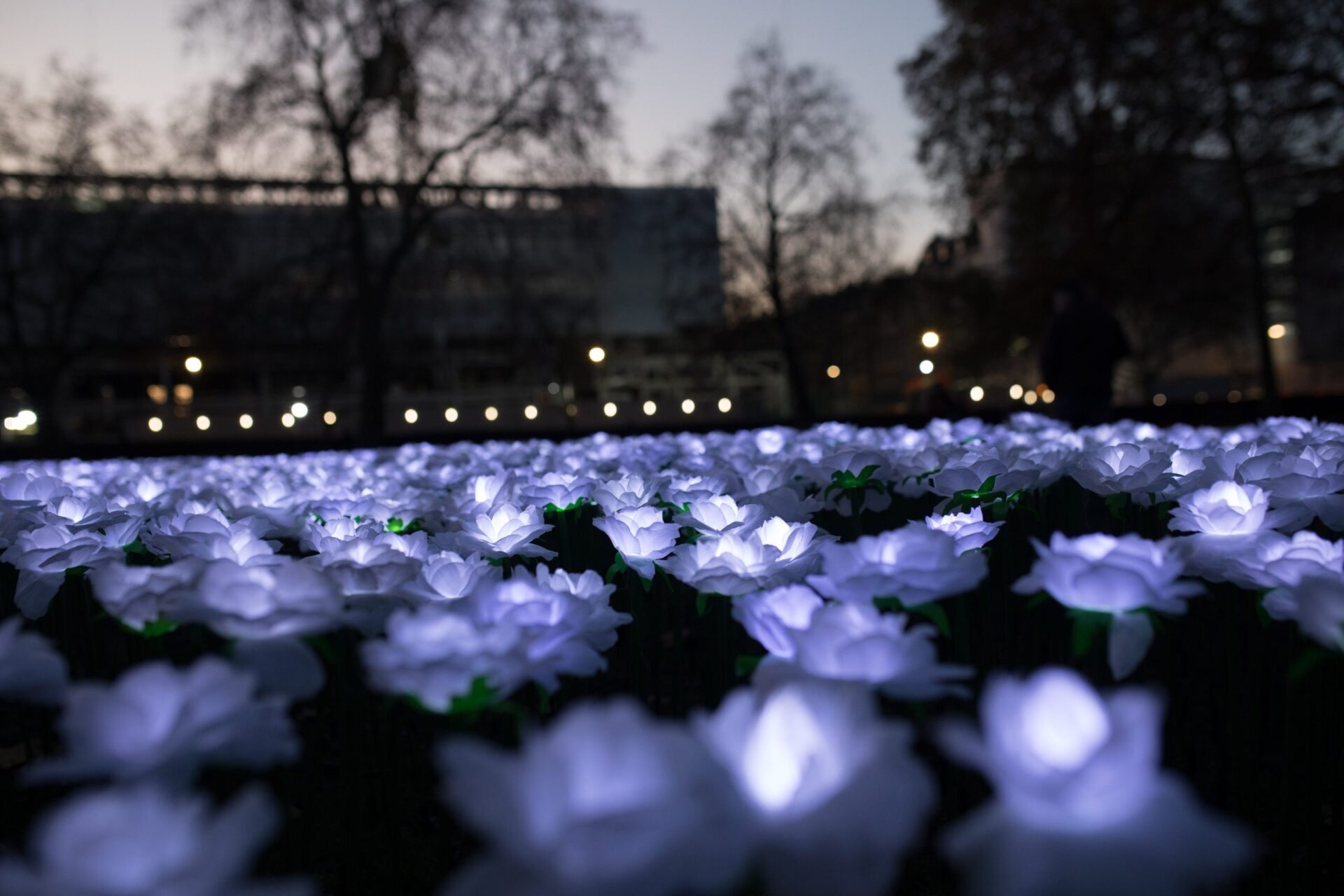 With a somewhat more solemn tone than other winter light trails, The Ever After Garden is a charity initiative by designer Anya Hindmarch and writer Camilla Morton. It’s a sprawling display of over 25,000 illuminated white silk roses, representing loved ones who have passed away, making for a beautifully moving installation. It’s even possible to dedicate one of the roses in someone’s honour for a £10 donation, which will go towards supporting The Royal Marsden Cancer Charity. 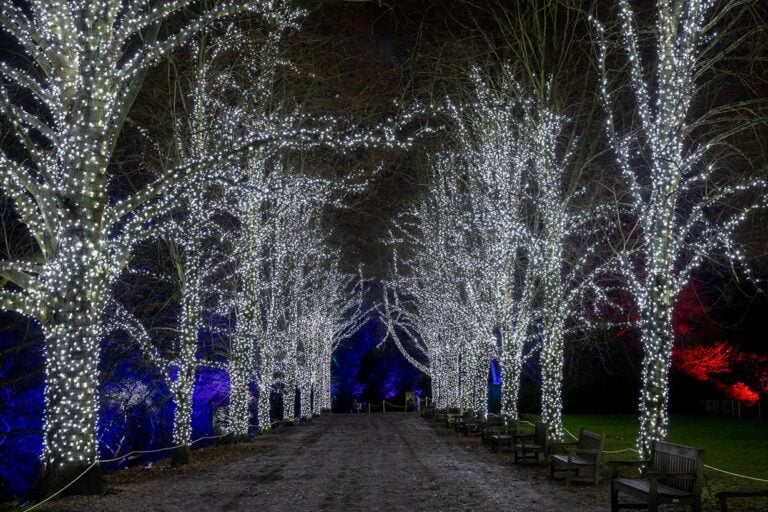 Planted in the middle of Hampstead Heath, Kenwood House has some seriously impressive grounds with views all the way down to Central London. But it wasn’t until last year that some bright spark realised they’d make the perfect setting for a magical 1.5km light trail starring millions of twinkling lights. And they’re hardly easing into it all gradually: you’ll walk past illuminated animal sculptures, dazzling projections onto the house itself, fire gardens, light tunnels, and something called a ‘laser garden’ which is probably the closest thing you’ll ever experience to being in a Jamiroquai video. 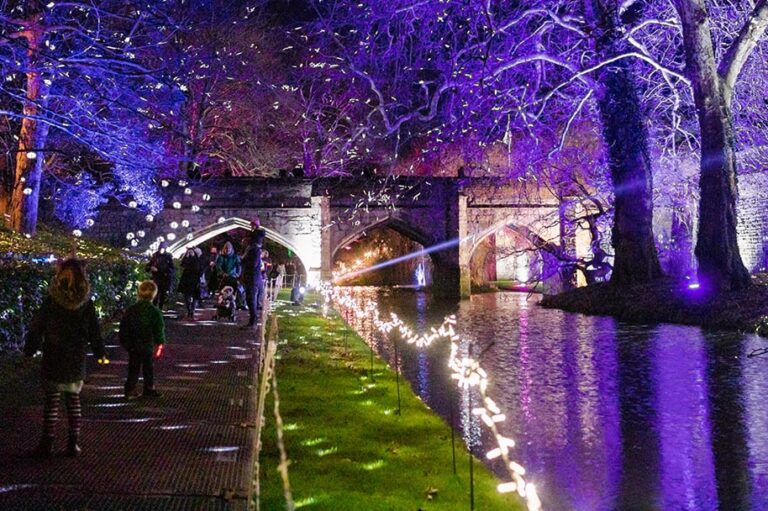 Running for just a smattering of dates throughout the winter, Enchanted Eltham is a hot ticket. The light trail you’ll walk around will take roughly 1.5-2 hours, and traditionally involves features like holographic talking birds in ornate cages, torchlit gardens, illuminated projections over the palace walls, and an actual maze of lights. And the kicker? There’s a fairground at the end, with rides, marshmallow toasting, and mulled wine. 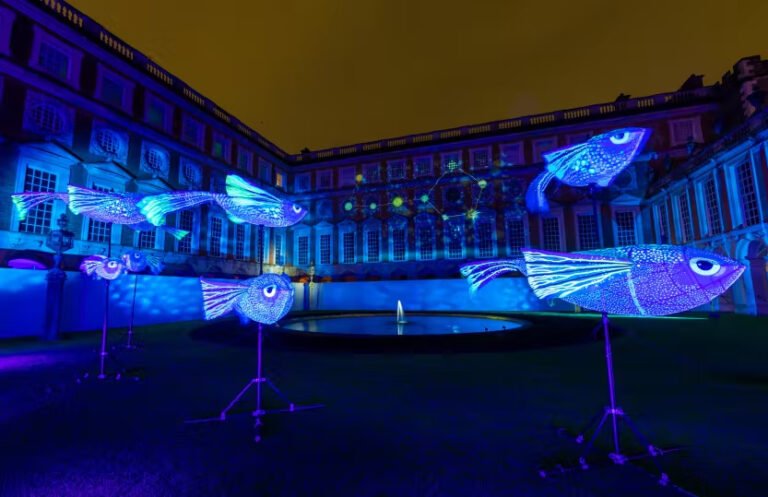 Back in the 1500s, Henry VIII had 90 Royal Beast sculptures made for his Privy Garden at Hampton Court Palace. Now, a couple of centuries later, they’re putting on a light show inspired by those same animals, which would have absolutely blown the man’s gout-addled mind. The light trail will be twice as long as last year’s, with glittering unicorns, polka dot panthers and even a KERB street food market winding around the palace grounds. And it just so happens that Hampton Court’s also home to one of London’s best ice rinks, too… As a kind of post-Christmas pick-me-up, Canary Wharf’s free outdoor lights trail returns in January 2023 for a seventh year. There’ll be over 20 illuminated and interactive artworks to marvel at, featuring previous big-hitters, new commissions, and pieces never before shown in the UK – including a pair of giant mammoths.