The Best Lakes in London

Lakes are always good for a bit of self reflection.

You just have to look at them…

When London and its constant hecticness all gets a bit too much (it happens), there’s nothing quite like being around a large body of water to help declutter the mind. And while it’s true, our fair city does love the colour grey, it doesn’t mind a bit of blue either.

Whether you’re thinking of visiting a lake for wild swimming, some boating, or just a simple scenic walk with your dog, you’ll find that you can reach all the best lakes in London by public transport without too much hassle – and even a few a little more out of the way (but very much worth the extra travel) if you’ve got a car.

So, dive in… unless you’re reading this in the middle of winter.
– 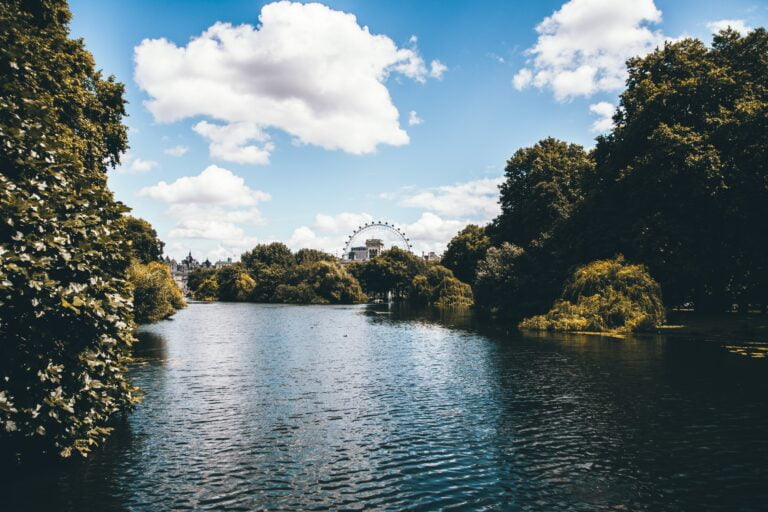 As the lack of human life should indicate, the water in the lake at St James Park isn’t meant for swimming. The paths around the lake, however, are a godsend for getting a bit of nature in you in the midst of all the royal and parliamentary buildings. If you’re lucky, you may even catch a politician getting some fresh air on their lunch break. Most people do two things: snap a pic of Buckingham Palace from the Blue Bridge, and check in on the lake’s long-standing tenants – a colony of pelicans, who somewhat ironically rule over Duck Island, first arriving here 400 years ago as a present to King Charles II. To be clear, the ones you see today are a new group (the average lifespan is 15-20 years…). 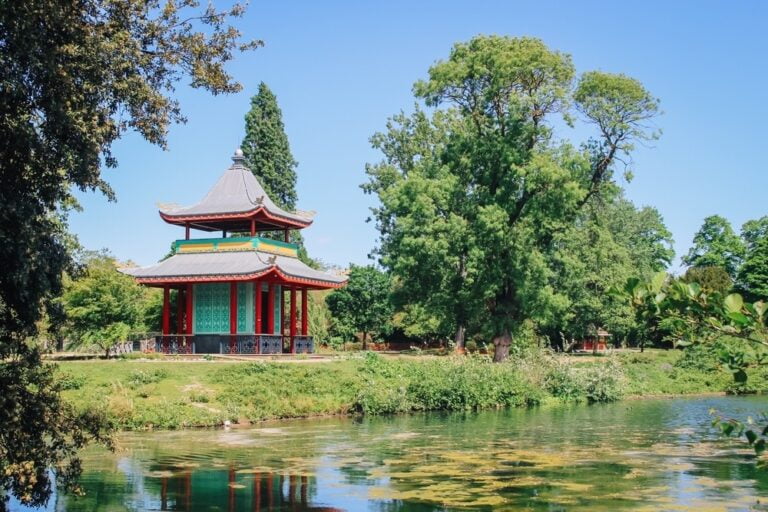 Tree-lined pathways, water lilies, a tranquil footbridge and then an enormous pagoda as the cherry on the top. You’d think we’re talking about The West Lake in Hangzhou, China, but instead, it’s the lake in Victoria Park. Marco Polo described the one in Hangzhou as ‘heaven on earth’ and there’s no doubt he’d have similar things to say if he came here, as it’s one of the prettiest lakes in London. Besides being easy on the eye, it’s also a pleasure to row around, and there’s 40-ish boats available for summertime use.

Details: Victoria Park, Grove Road, E3 5TB | The park is open from 7am-dusk, boating in the summer from 11am-5pm | Find out more here
– 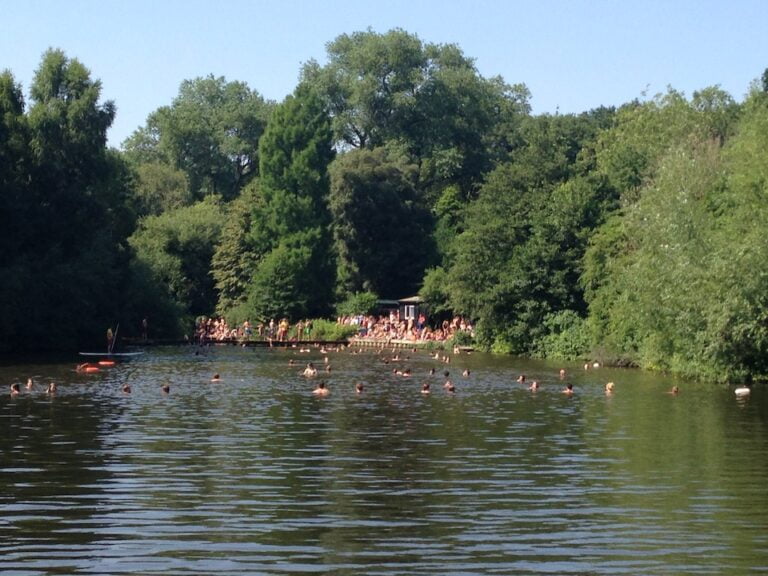 When it comes to beating the heat by plunging yourself, gracefully or ungracefully, into a big basin of freshwater, Hampstead Heath has one of the best lakes in London for it. It’s technically a cluster of 25 ponds, three of which are open for swimming, but with no chlorine, waterbirds for company and possibly a few other creatures living under there that you’d rather not know about, we’ll let that slide. The dipping fee is £4.25 but after that all you need is a good book, a towel and preferably some togs. You can also swim as nature intended during winter if you’re crazy enough, as the Heath is open all-year-round.

All that water making you thirsty? Grab an ale at The Spaniards Inn nearby, one of the oldest pubs in London. 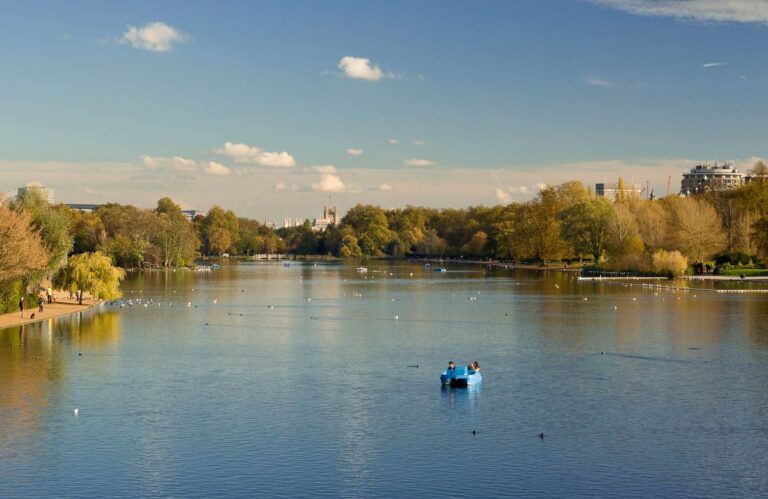 This snakey lake holding court in the middle of Hyde Park is a melting pot for aquatic activity. It’s famous for turning pedal boating into one of London’s most popular forms of summer entertainment and it’s also got the city’s oldest lido in its locker where strong swimmers patiently co-exist with gaggles of geese. If you’d rather avoid getting wet altogether (and tbh, any exercise altogether), you can hop aboard the UK’s first Solarshuttle where the sun does the leg work for you – and then hop off again to appreciate the beauty of both modern art at the Serpentine Galleries and smashed avo & poached eggs at the Lido Café. There’s so much to do around the lake you could probably make a day of it… 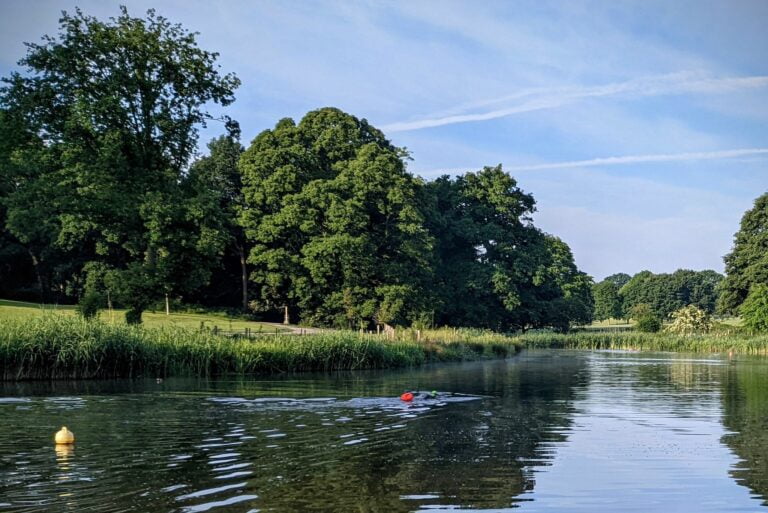 Beckenham Place Park has one of the newer lakes in London – it was unveiled in 2019, in the height of summer, as a 285m-long wild swimming lake. It was a bit of tease when it did first open, closing again after just five days as it got wayyy too crowded – a lapse of judgement from the Lewisham Council, who underestimated how excited Londoners get over the chance for an outdoor splash. Today, all that opening week kerfuffle is in the past and the lake flows smoothly with ducks, fish and a more sensible approach to managing visitor numbers: you need to book. You also have to be over the age of eight if you want to swim (sorry kids). 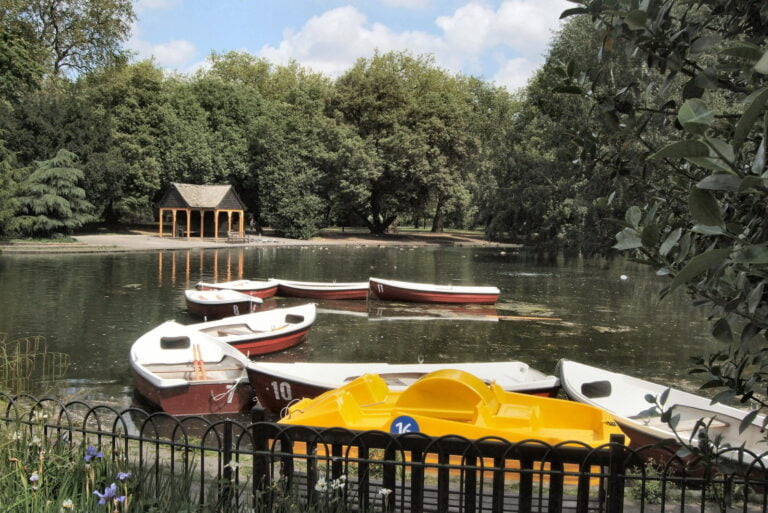 As all good lakes in London should, Battersea Park’s body of water provides a peaceful spot to escape the big city crowds, especially if you’ve pedalled out into the middle of the lake on one of the hire boats. In addition to the lake, the park itself has way more up its sleeve with a Buddhist peace pagoda, a contemporary art gallery housed in a beautiful grade II listed 1861 building that once supplied the water to the lake, sports facilities for days (tennis courts, a running track, artificial football pitches and mini golf, if you count that as sport) and a children’s zoo. Adults are welcome there too… 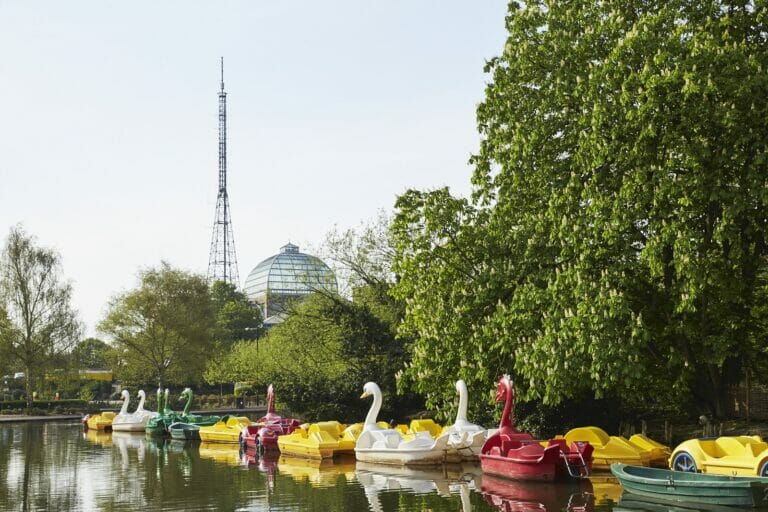 Ally Pally has loads going for it: the panoramic viewpoint, the darts, the fireworks, the gigs. But how about that lovely lake, huh? It’s not’s the biggest lake in London, but you can go for a 30 minute joy ride around it on either a Volkswagen Beetle, a dragon, a swan or a flamingo (these being pedal boats, of course). Admire the scenery with an ice cream from the lakeside cafe, or if you’re more into green spaces than blue spaces, there’s Alexandra Park in the grounds as well. 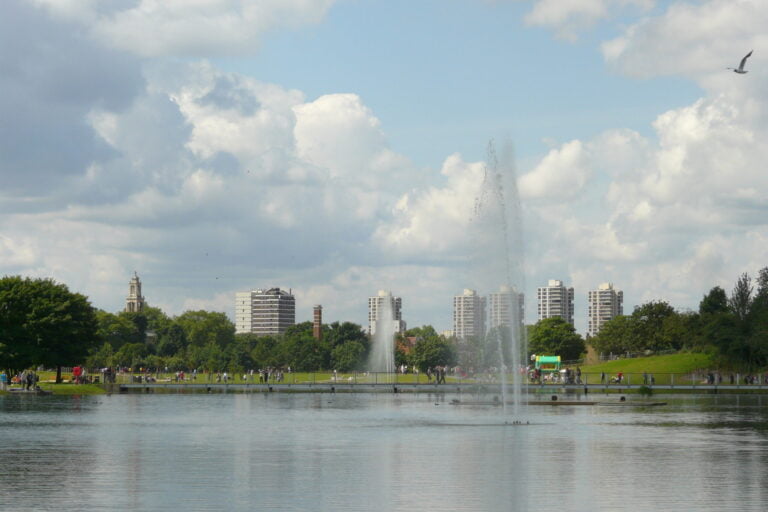 One of the big hooks to the lake in this South London park – besides the clear view of the London skyline – is that you can fish. Look out for the designated angling areas where you can reel in the likes of bream, roach, rudd, perch and carp (provided you have a rod licence, that is). In summer, the lake is popping with punters getting their grill on as there’s also special spaces reserved for barbecuing. You can’t turn your fresh catch into dinner though, as fish must be let go and returned to their underwater homes – so stick to the sausages… 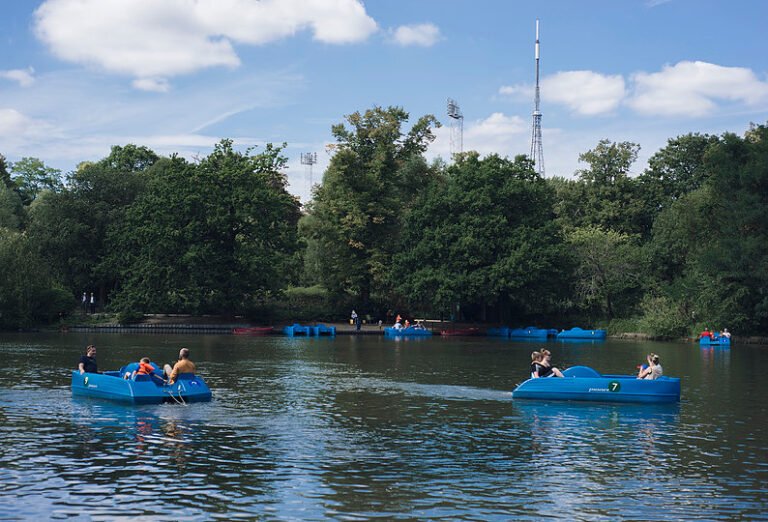 Cruise around this lake in the corner of Crystal Palace Park and something may jump out at you from the trees – a gang of dinos that have inhabited the park since 1852.  Don’t mind them though, they’re harmless and the oldest dinosaur statues in the world at 170 years old (prehistoric, right?). Their value has seen them become grade 1 listed, putting them on the same standing as Buckingham Palace. Off the water, the rest of the grounds are a bit of a Lost World too. Particularly if you’ve ventured into the park’s 160ft maze. 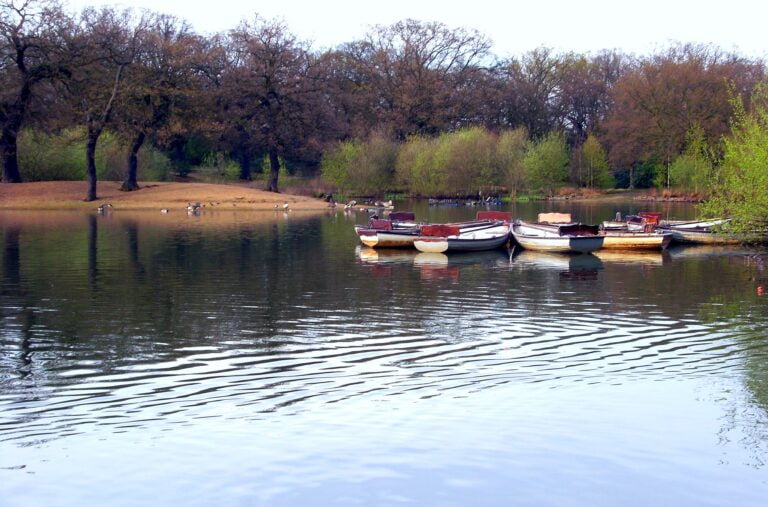 The lake at Hollow Ponds has all the tools you need to reenact that scene from The Notebook: the surrounding woodlands of Epping Forest (at its beautiful best in autumn), vintage paddle boats, swans and unreliable weather. It’s an hour or so from central on the tube, but in truth when you’re on the water casually rowing as if time doesn’t exist, it feels even further afar than that. The only honks you’ll hear are from the swans.

Further afield, but still worth the venture…
– 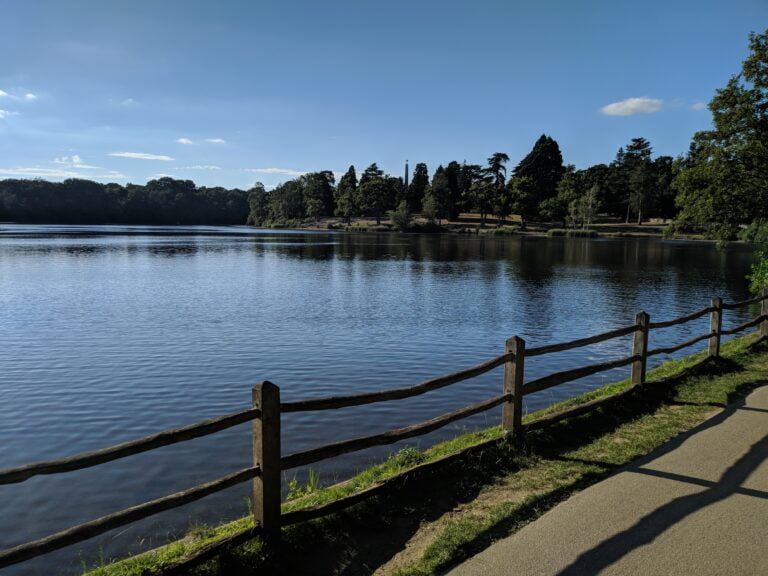 At the south-east edge of Windsor Great Park, Virginia Water has the double whammy of being a majestic tree-lined lake and a Harry Potter filming location: you’ll spy it in the wholesome scene in The Prisoner of Azkaban when Harry first gets to fly on Buckbeak, and then in the not-so-wholesome scene where he almost gets his soul sucked out of him by a dementor. In terms of walking/dog walking/cycling, it shines all-year-round (it’s a peach during summer and golden during autumn) and the lakeside walk itself – 4.5 miles long – is full of intriguing landmarks including a waterfall and a 100-foot totem pole (a gift to Queen Elizabeth II in 1958 from Canada to mark 100 years of British Columbia, in case you were wondering…). 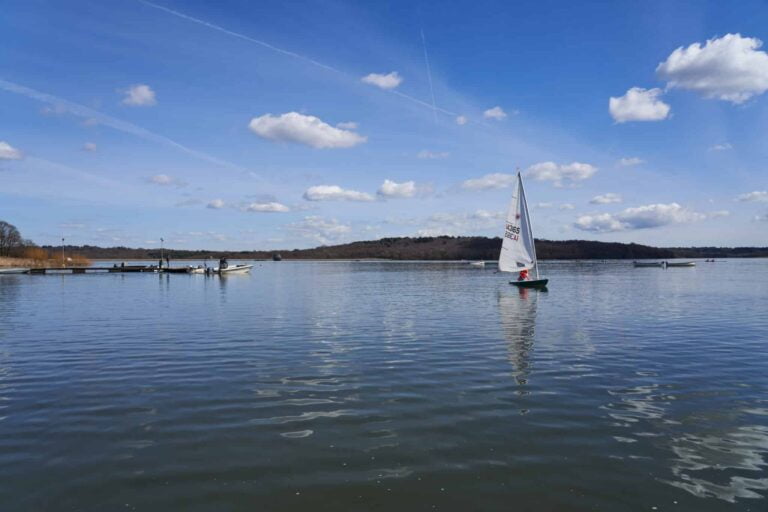 To reach Bewl Water, you’ll have to undertake a two hour drive down to the boundary between Kent and East Sussex. If the thought of that leaves you feeling restless, fret not, because a trip here usually involves plenty of movement. The lake is the largest in the South East, and the walking route is 12-and-a-half-miles long. It’s ideal for the adventurous lake visitor and you can give pretty much any kind of water-sport a go: from sailing and windsurfing to kayaking and rowing. It’s also got an ‘aqua park’ (a floating obstacle course) which is essentially like a playground on the water. Perhaps avoid that one if you don’t fancy getting wet…

Love the great outdoors? Then you’ll probably be interested in London’s best parks too…