The Best Pubs in Angel | Canalside Boozers & Pubs For Dancing

Angel was named not after celestial creatures or its pious inhabitants, but rather the Angel Inn, which stood in the area during the 17th Century. Hundreds of years later, Angel is no stranger to pubs and taverns. But with so much choice comes great danger: how can the average punter stick to the path of righteous alehouses when the devil is there to tempt them at every turn? Well, consider this handy guide our divine intervention, to keep you on the straight and narrow, only calling at the cream of the crop of Angel pubs.
– 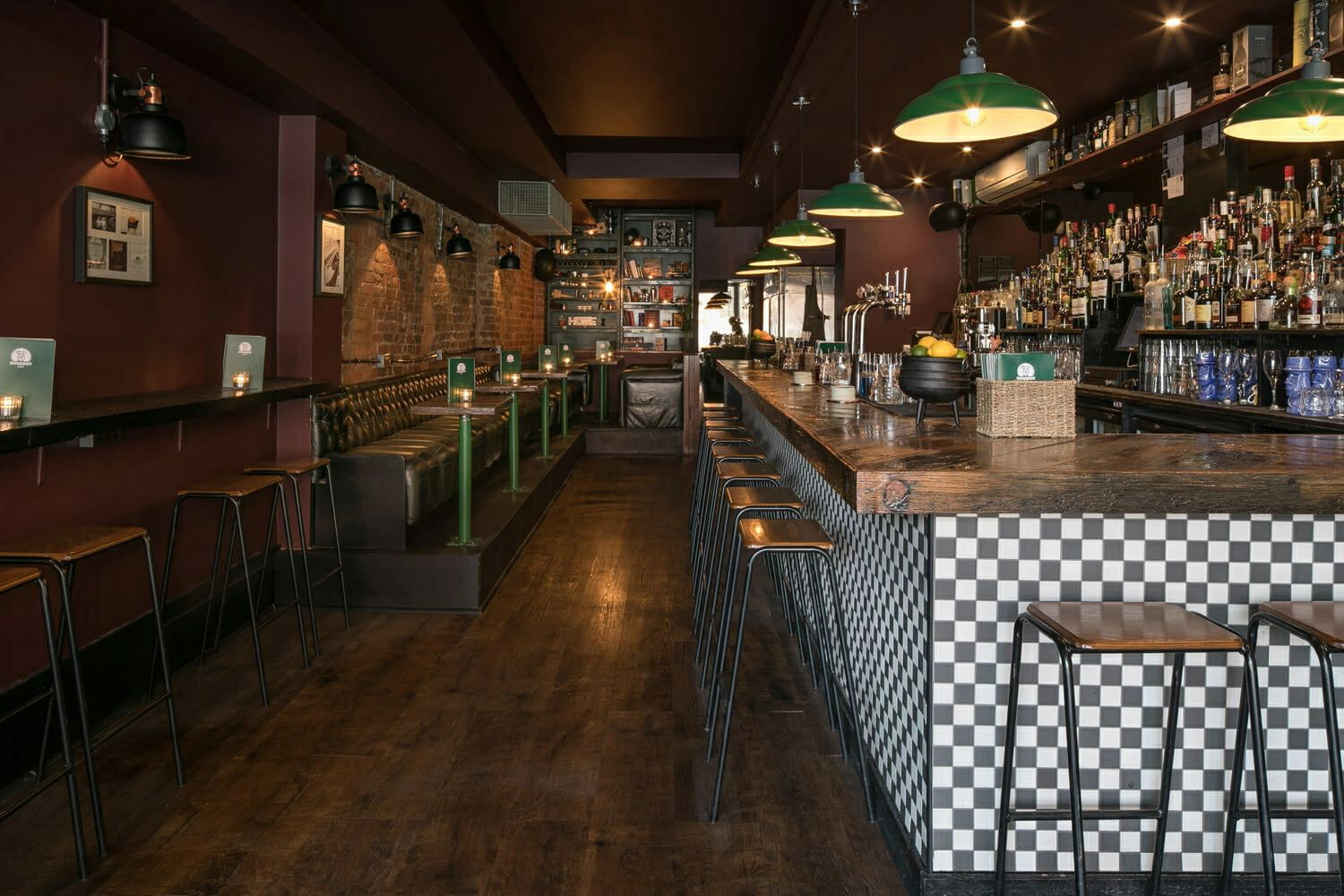 Homeboy Bar describes itself as modern Irish hospitality, and the smart speakeasy interior, green colour palate, and studded leather banquettes certainly provide the right setting. Cocktails are the main focus, and all come with a pleasing Irish brogue. There’s the Wogan (a whiskey, lime, and apricot concoction), The Teaandabiccie (where clarified milk and Barry’s Irish Tea makes friends with Benedictine), and a whole host of classic cocktails with an emerald spin. The food is similarly themed, serving up Irish stew alongside sharing plates and a commendable list of potato based dishes. There were once civil laws in Ireland that stated if a traveller was in need, an Irish citizen must welcome them into their home for food, drink, entertainment, and a bed. There’s no bed here, but with the owners having previously worked at Callooh Callay, London Cocktail Club, The Dorchester, and the Waldorf Astoria NYC, you’ll be glad they’re welcoming you into their home for everything else.

The Joker of Penton Street 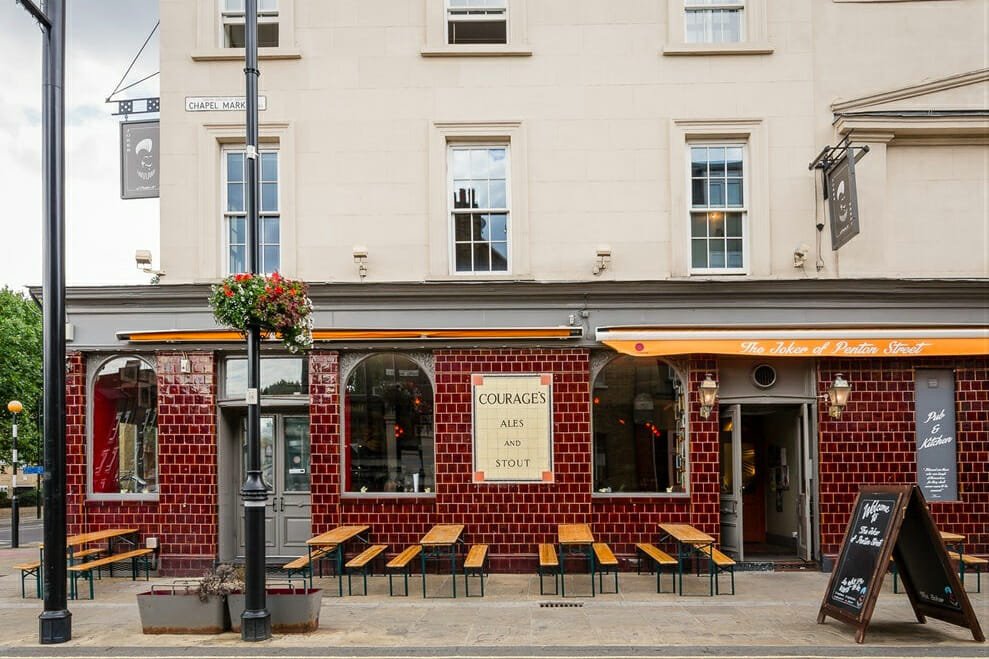 Based on Grimaldi the clown, this delightful late night pub and kitchen has a playful interior and promises an entertaining night. They’ve a 16-keg tap wall with pales and porters to whet your whistle alongside cocktails and spirits. The food menu involves pub classics, with a slight lean towards America and comes with 50% off on Mondays (the price, not the quantity). They also host live blues on a Wednesday, with dance classes available beforehand for those looking to learn some fancy footwork. On Thursdays it’s 2-4-1 Tanqueray and over the weekend they bring DJs along to keep the place pumping till 3am. They also offer talks and seminars on occasion, which cover subjects as broad as ‘The Law of Attraction’ to ‘The Psychology of Batman Villains’, and the chance to get creative with pottery classes and silversmithing. For jokers, they’re very serious about providing a good night out. 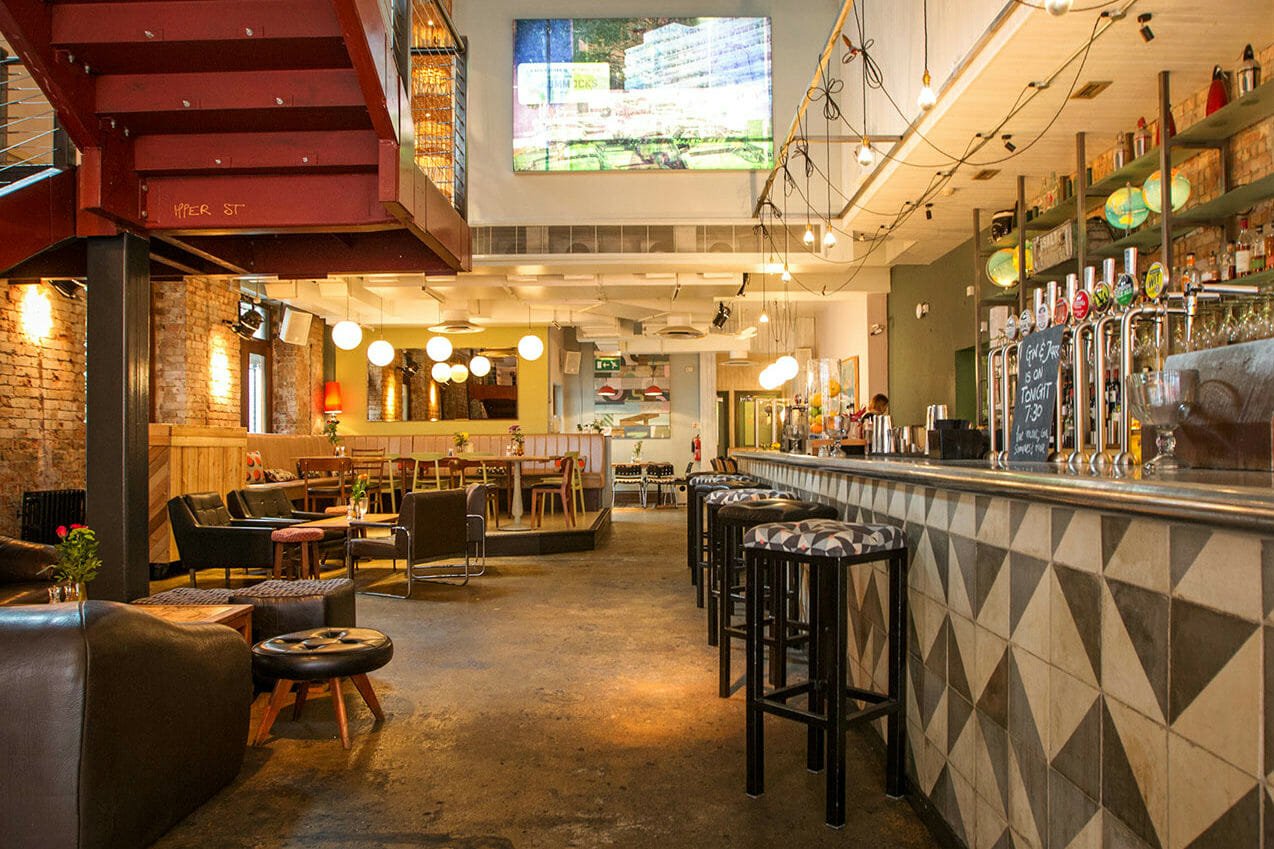 The retractable windows facing onto Upper Street, the exposed brickwork, and the woodwork prints on the walls all combine for the elegant industrial vibe of John Salt. With street seating out front, and a secluded rear garden out back, the pub is the perfect spot for, well, a spot of brunch. As the day lengthens the drinks get shorter and the bar becomes a cocktail lounge serving up all the classics alongside their own house creations. Between 5pm and 7pm, during the week, you’ll get to try two of them for the price of one and for food there’s burgers, sharers, and small plates, with bottomless brunch on a Saturday and Sunday. READ MORE 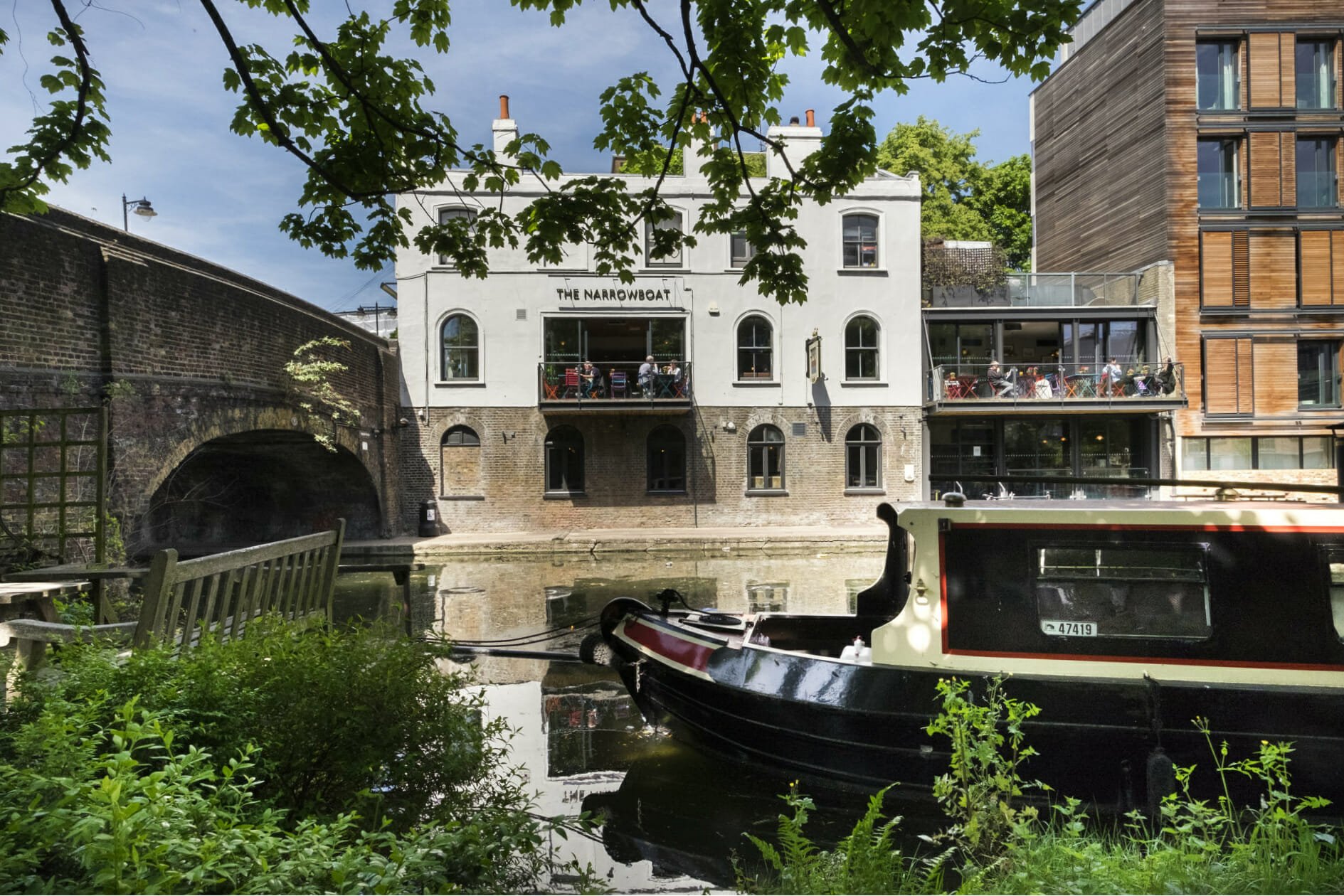 Directly overlooking Regent’s Canal, The Narrowboat provides an unrivalled view of the waterfront. It has a bright and airy interior with plenty of natural light flooding in through the terrace widows that sit above the water. The result is a much more industrial and modern vibe than you get from most Young’s pubs, and as a result it’s the perfect place to wile away an afternoon. The drinks have all the bases covered and the food is a strong offering of modern pub grub. They play sport when its on, do a roasts on a Sunday, and are open most of the day. 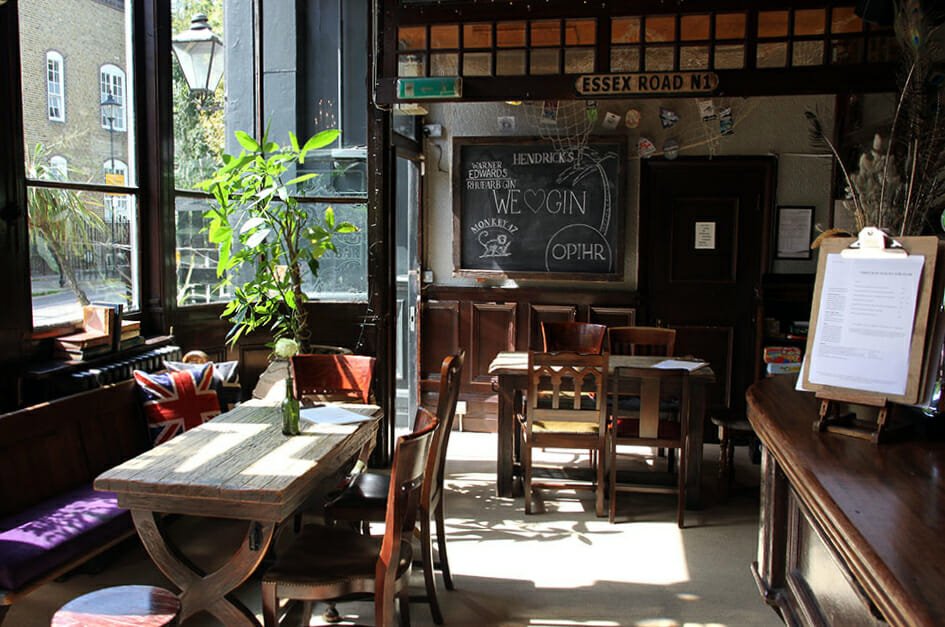 Inspired by the gin palaces that once adorned the canal-side, The Island Queen feels like a 19th century engraving come to life. Its shabby-chic interior, original wood and glass screens, eclectic wall ornaments, palm trees, and ferns make it an oasis tucked away on Angel’s backstreets. It’s the only pub in Britain to be called ‘Island Queen,’ which comes from a 19th Century American steamboat of the same name. The fare is thoroughly British though, so expect plenty of gin behind the bar, and a wide range of craft beer and ale (both on tap and in bottles/cans). The food menu is made up of all the classics, includes a separate section for kids, and – like any pub worth its salt – roasts on a Sunday. 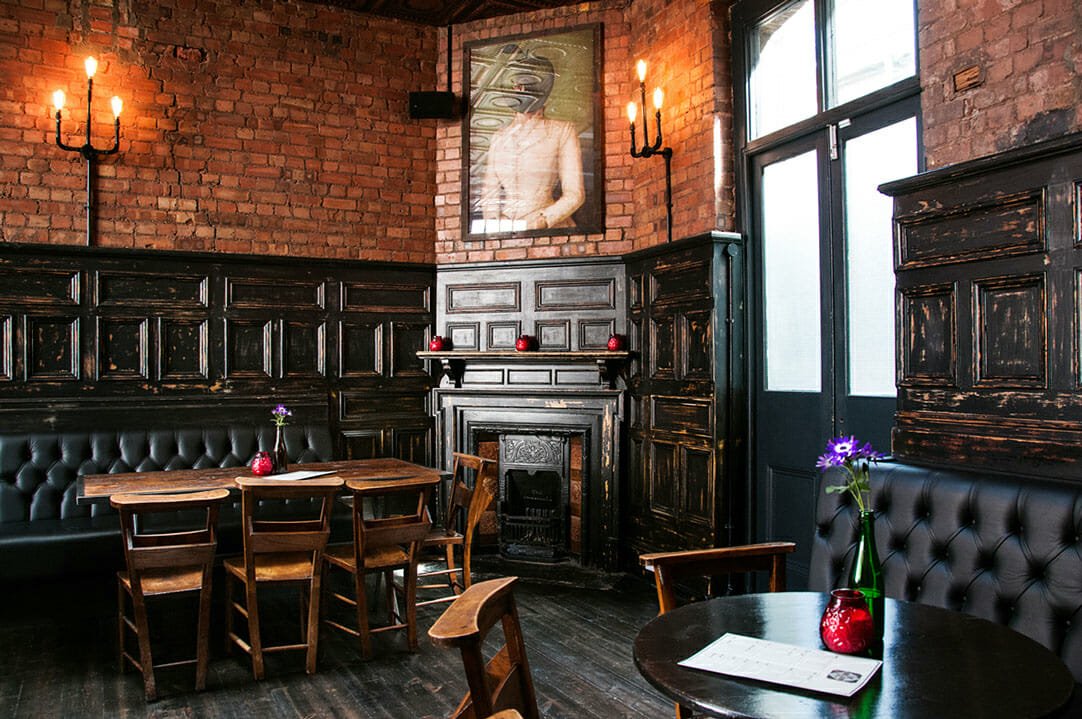 Exposed brickwork, very high ceilings, wooden furnishings, and rows of black leather banquette seating make The Three Johns an atmospheric drinking den. The high windows flood the main bar with daylight and a long bar means fighting for a spot is never an issue. With 14 beers on tap there’s plenty of options from across the globe and alcohol spectrum, with some of the porters getting over the 10% ABV mark. Behind the bar in bottles and cans there’s a formidable array of different pale ales, sours, blondes, stouts, and lagers which means everyone is likely to be catered for. 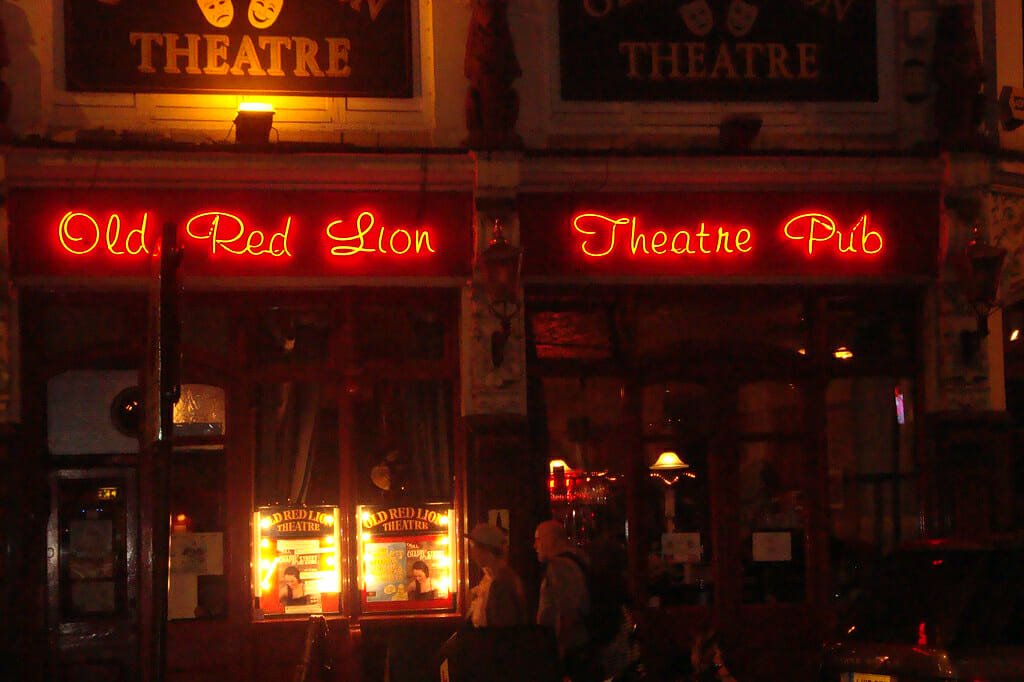 As well as good boozers, Angel has a lively fringe theatre scene. Tucked away in the backrooms and old storage spaces of pubs up and down Upper Street are comedy troupes, experimental theatre collectives, and Shakespeare enthusiasts putting on both excellent and terrible performances of live theatre. One of the more reliable venues is The Old Red Lion. Its focus is on new and upcoming writing, which has seen global talents like Joe Penhall and Kathy Burke showcasing their early work, as well as rising stars netting themselves OffWestEnd awards. The pub itself is also pretty solid with a Pieminister inside serving up grub; football shown whenever possible; regular quizzes; and live music on occasion. There’s also plenty of beer on tap.

The Pig and Butcher 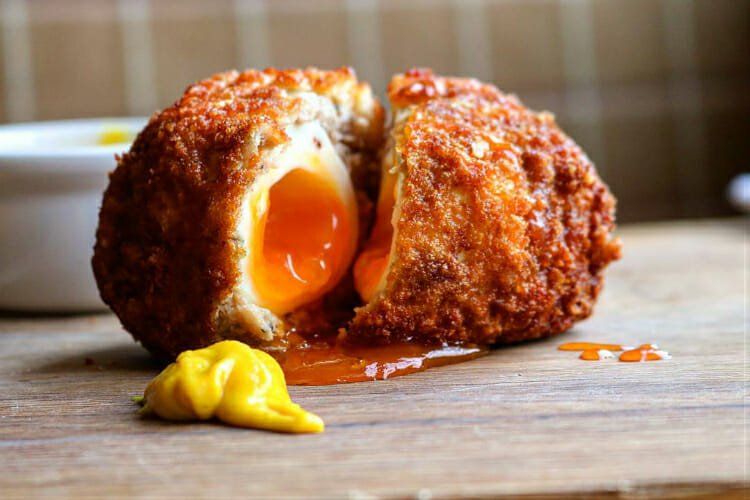 A rustically decorated farm-to-table gastropub set over two floors, serving the best scotch eggs on the planet. The chefs behind it have direct relationships with the suppliers (all British), so everything arrives at your table as fresh as it can be. They butcher their cuts in-house, in the basement butchery, before sending them up to the tables – the sharing steaks (served with bone marrow and triple-cooked chips) being the pièce de résistance. That small, independent producer ethos extends to the drinks menu, too – so expect plenty of bottled craft beers and ciders, and small grower wines. READ MORE

This big, retro-styled pub sits in the heart of Islington and has its very own light up dancefloor in the adjoining Satan’s Circus nightclub. You’ll find it bustling with large groups and parties most nights but are still likely to find a seat to enjoy their selection of cocktails, punchbowls, and various beers & wines. Pizza’s the order of the day here, with sourdough crusts and toppings like pork belly, grilled aubergine, and much cheese. Satan opens the gates of hell on Fridays and Saturdays, but only for the over 21s. 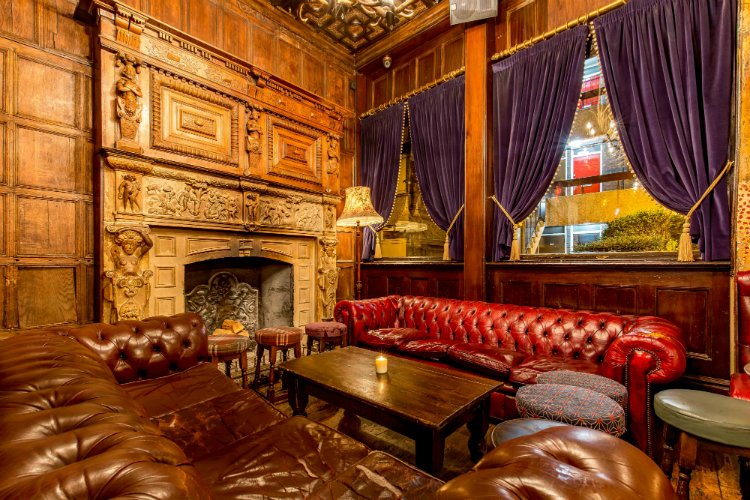 The Old Queen’s Head is a rustic dreamscape of wooden panels, portraits of old dudes and duchesses, red leather sofas, and various mounted animal heads. This bric-a-brac interior gives the place a Disneyland of English pubs vibe, and makes it a great place to enjoy a pint. During the day you can chow down on gourmet burgers and fries from Lucky Chip, watch live sport, or relax by the roaring fire with an ale or one of their many cocktails. But come weekends, the place packs out, thanks to DJs spinning classic hip hop, R&B and 90s music every Saturday. Plus, there’s karaoke to enjoy, in their bookable playroom with vintage foosball and arcade machines. With an interior design that mashes together a London boozer with a Kentucky living room, The Lexington is a lounge bar like no other. Its firm focus is music, and from Wednesday through to Sunday you’ll be able to enjoy live music or DJs. The remit is wide with 60s pysch, rock, and the obligatory roll getting an outing midweek, punk and indie propping up the weekend, before Saturday and Sunday bring the tunes back to the present day for their club nights. On Mondays music still makes an appearance in the guise of their famous Pop Quiz (a collab with Rough Trade that includes rounds like ‘Badly Drawing Boy’ – guess the LP cover from a kid’s crayon rendition) . The food comes courtesy of Cut & Grind, offering award winning burgers, and the booze covers all the bases, but leaning in to that Kentucky style decor, there’s an extensive bourbon collection.

Like spending time in Angel? Check out our Islington Guide for more ideas