The Best Sushi Restaurants in London

It’s hard to say definitively who the best raw fish-slingers are in London.

We love the places that really go the extra mile – whether it’s a third-generation sushi master at the helm, or the fish fresh off the boats that day, or the fact that the chef has trained Cornish fishermen the centuries-old Japanese technique of humane dispatch, ike jime. Either way…

…all of these sushi joints are on a roll.
– 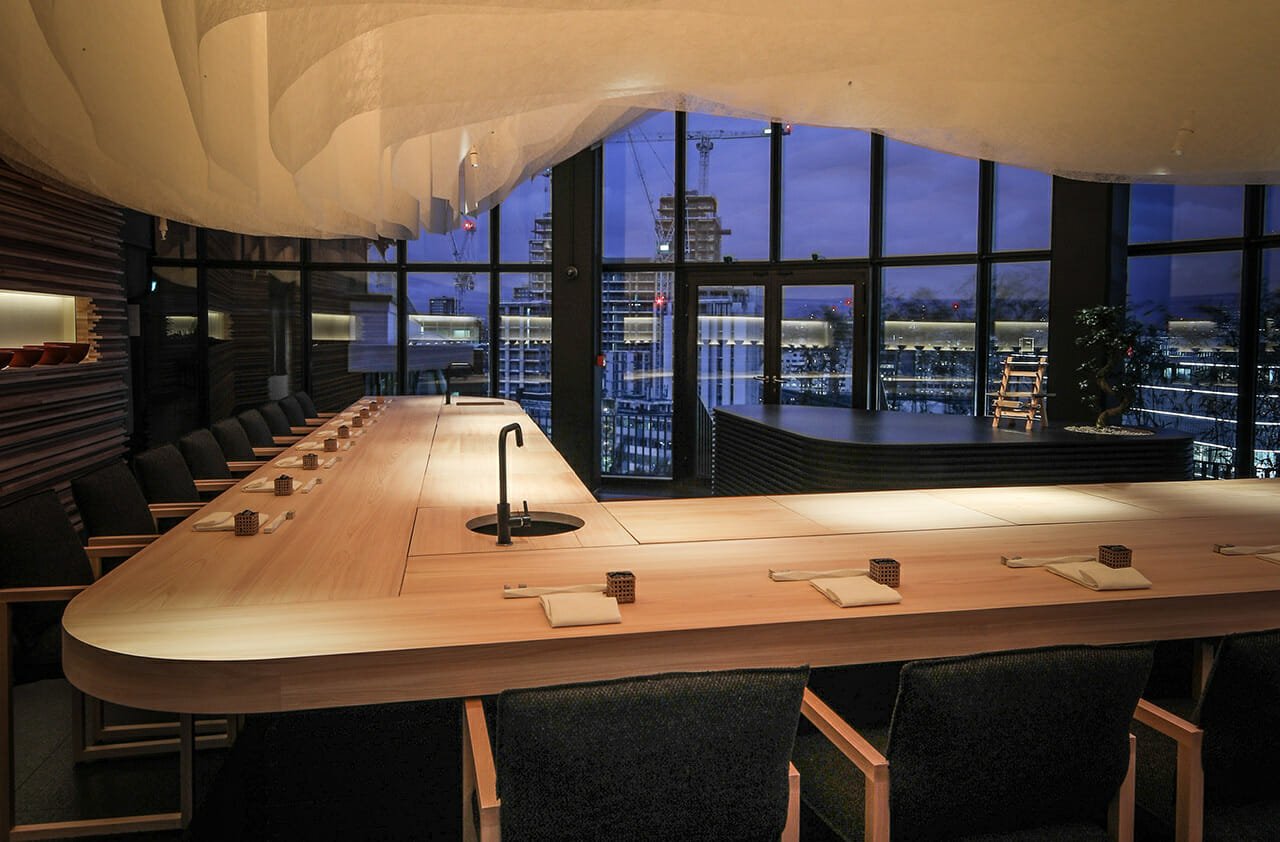 The newest opening on the list, Endo is the long-awaited restaurant from Endo Kazutoshi, previously of Zuma and Spain’s celebrated El Bulli, and third-generation sushi master. It’s perched on the 12th floor of the former BBC Television Centre building in White City, and dining here really feels like you’re in the clouds, thanks in no small part to the sinuous, billowy sheets suspended from the ceiling (designed by the architect currently working on Tokyo’s 2020 Olympic stadium). With just 24 seats, it’s an intimate experience in which you’ll be able to watch Endo close up as he preps a 15-18 course omakase tasting menu with truffled spider crab and langoustine nigiri. READ MORE 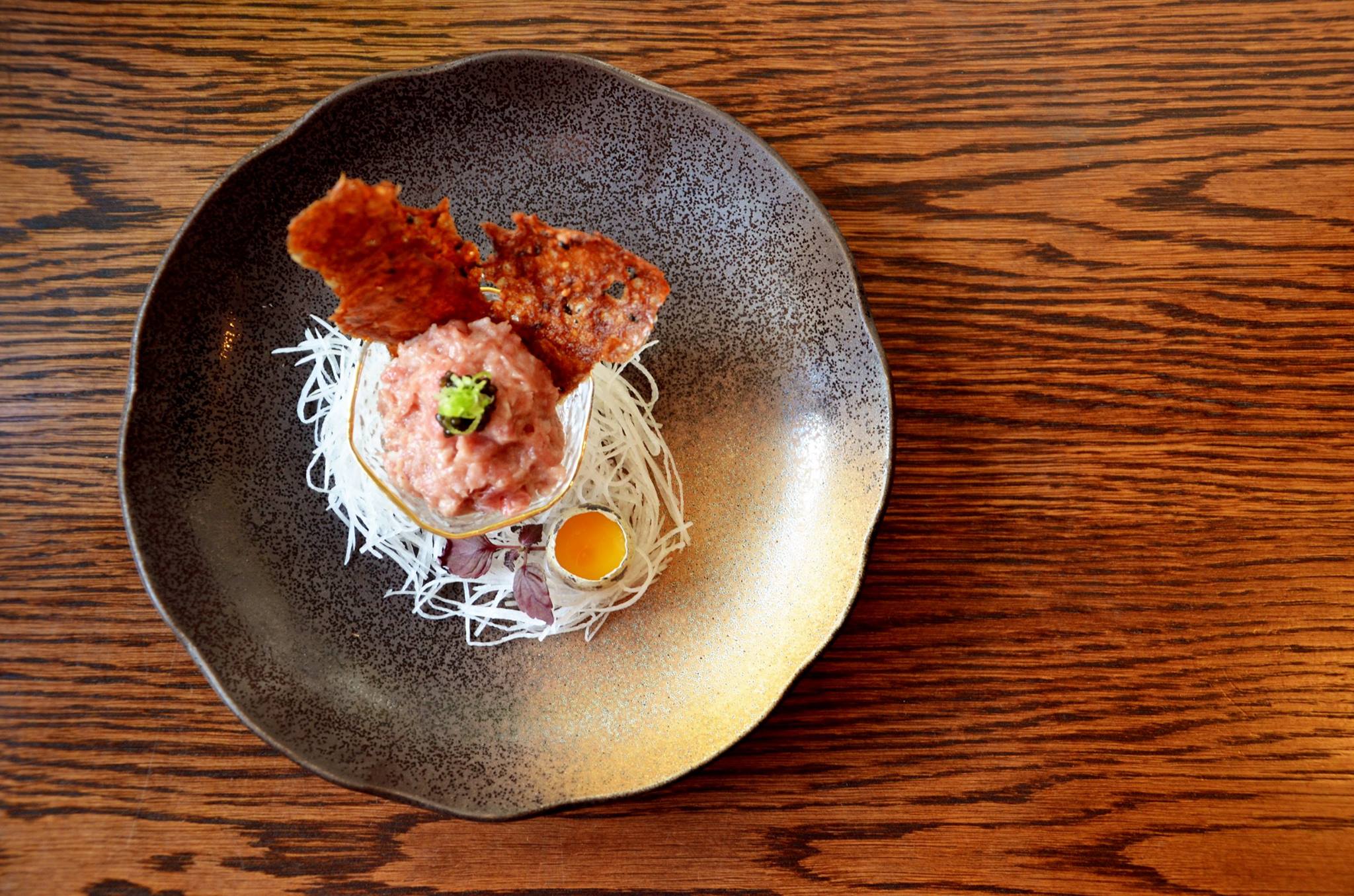 Chisou is the Japanese word for feast, and you won’t be disappointed here. The Mayfair restaurant’s been going strong for the best part of two decades, and has since opened a second site in Knightsbridge. The atmosphere is calm and dignified without being stuffy; there’s a counter if you’d like to take in the theatre of the chefs or simple tables and chairs surrounded by Japanese artwork. Fresh fish is delivered to the kitchen daily, where it’s masterfully assembled into moriawase dishes (an assortment of raw sliced fish), nigiri (fish layered on top of sushi rice) and chirashi (sashimi arranged over a bowl of sushi rice, with shiitake mushroom and seaweed). Plus, there’s an excellent array of hot izakaya-style dishes for anyone who’s not so keen on eating raw. READ MORE 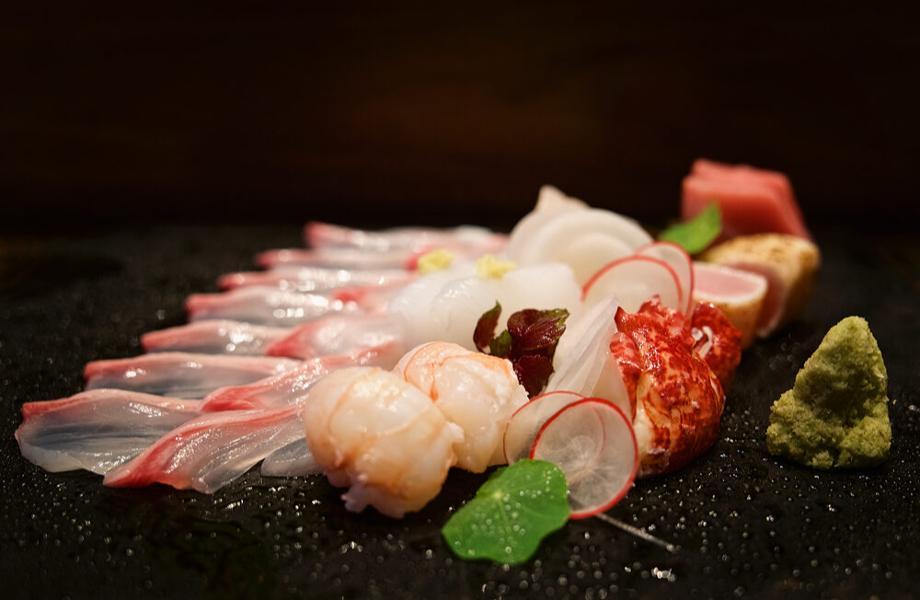 A gorgeous, dark, woody cocoon, Umu is tucked down a Mayfair side street and is accessed by placing your hand on a magic panel. Head chef Yoshinori Ishii is so devoted to the sushi craft, he’s trained the Cornish fishermen who supply the swimmers in the ancient Japanese art of ike jime; a humane slaughter method that’s not only kinder to the fish, but stops them releasing stress hormones that can toughen up the meat. The result? Melt-in-the-mouth classics (yellowtail, tuna belly, salmon and mackerel) alongside innovative creations (langoustine and ginger, eel and caviar rolls) and one of the most comprehensive sake lists in Europe. READ MORE 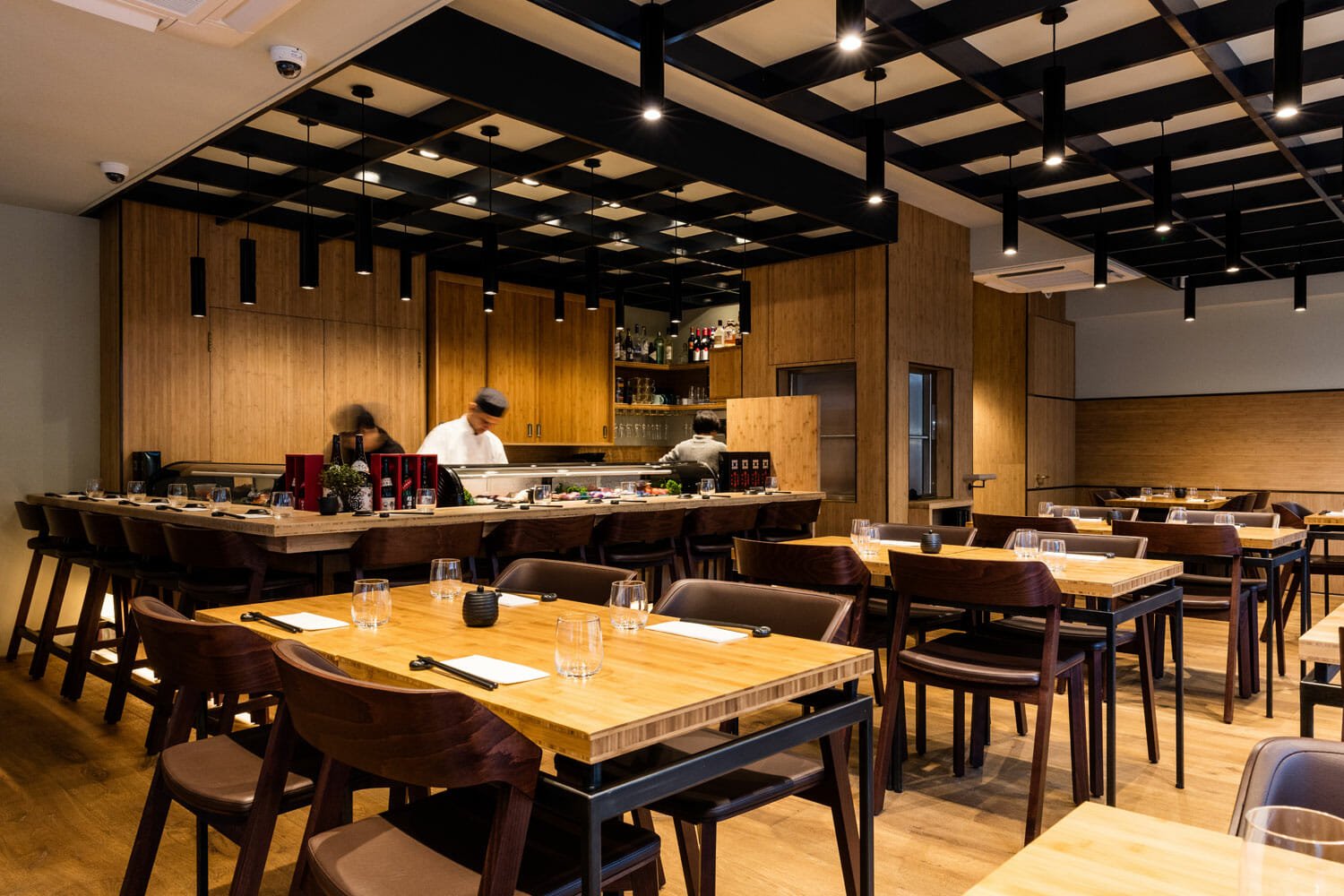 An authentically Japanese experience, Kazu is an upmarket izakaya traditionally decked out with clean, minimalist wood and trellised ceilings. The head chef was formerly at Chisou, and his three decades of experience in the kitchen really shine here. The sushi range is vast – there are elaborate rolls (like the crab roll topped with grilled eel and flying fish roe); inside-out rolls; inside-in rolls; thinly sliced usuzukuri; chirashi rice bowls; lightly seared sushi; and a long à la carte list of sashimi, including bluefin tuna, yellowtail, butterfish, scallop, squid and sea urchin. And if that all sounds a bit overwhelming, just go for the omakase. READ MORE

This elegant eatery has rapidly expanded across London, with four restaurants now dotted across the capital. But in spite of their expansion, they’ve each retained a unique feel – particularly during cherry blossom season, when the Fitzrovia original finds itself decked out with a canopy of flowers. The menu’s a tale of two halves, with equal billing given to the paper-thin, truffle-drenched sashimi & sushi dishes, and the heartier skewers, meat and fish scorched over the robata grill. READ MORE
– 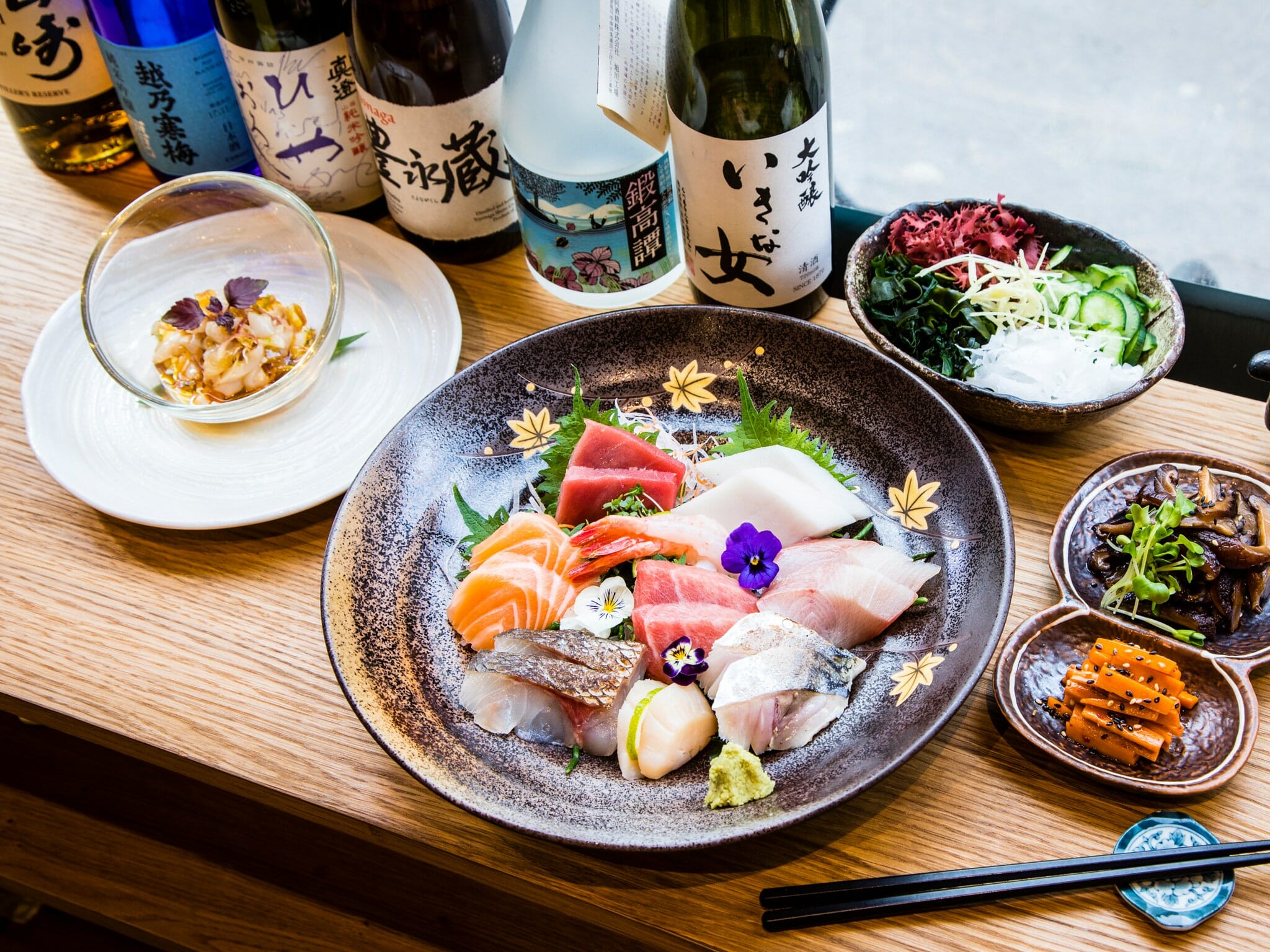 Another Chisou spin-off, Sushi Atelier is the more casual branch of the family. The place feels quintessentially Japanese, with counter dining, noren curtains and huge sake barrels dotted around the space. The food, on the other hand, is bang up to date, with sushi blowtorched before your eyes and razor clam ceviche with whisky jelly, served in a smoking glass bowl. For the traditionalists, there’s omakase and bento, or a PYO selection of horse mackerel, butterfish, snow crab, turbot and more. READ MORE 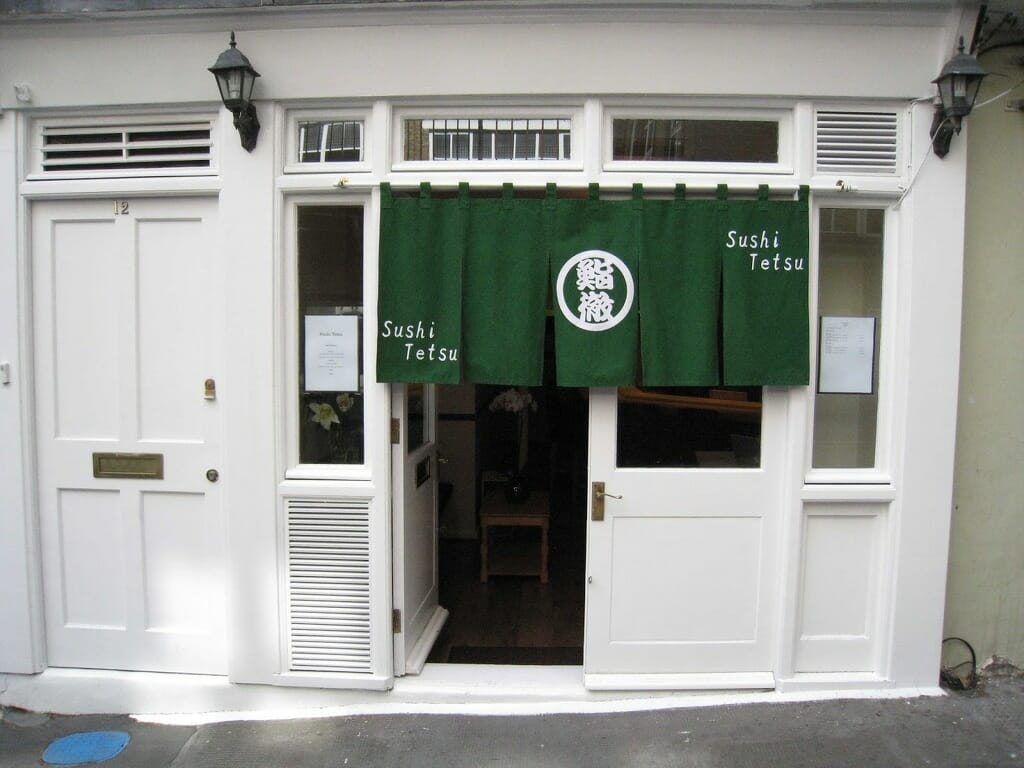 Duck under the noren curtains at Sushi Tetsu and you’ll be met with the kind of authentic Tokyo sushi den you’d never expect to find down a Clerkenwell back street. Run by Toru Takahashi and his wife Harumi, it’s a tiny, 7 seater restaurant with stools overlooking the open kitchen. It’s intimate, unexpected, and unbelievably special, not least because Toru likes to scorch his fish with a blowtorch. READ MORE 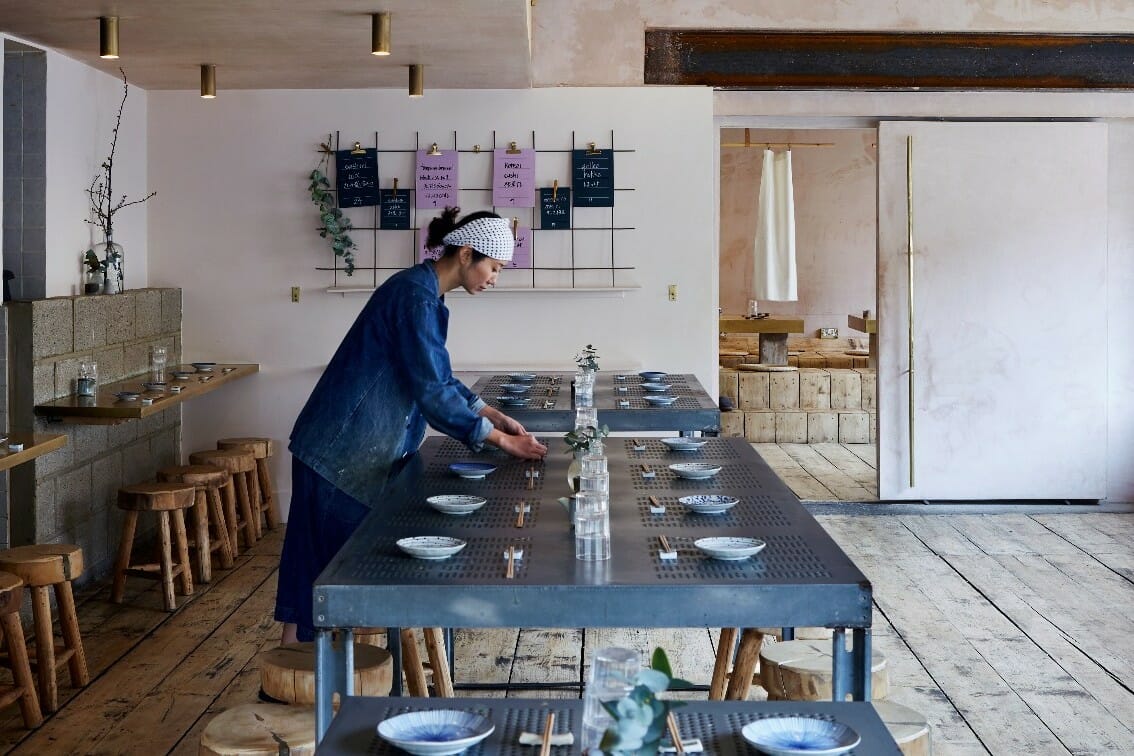 You can give up the hunt for East London’s most beautiful restaurant now. Uchi (meaning ‘house’) is an ode to the handmade, with distressed floorboards, bare plaster walls, stunning Japanese crockery and hand-crafted stools. The sushi list is short but well-made – don’t expect anything too exotic, but you will find delicate salmon and tuna nigiri, and some signature sushi specials like soft shell crab and seared beef rolls. A slim selection of robata-grilled skewers, tempura, sake and beer rounds off the menu. Plus, there’s a side room filled with horigotatsu seating for the authentic Japanese restaurant experience, where you slip your legs into a sunken recess below the table. 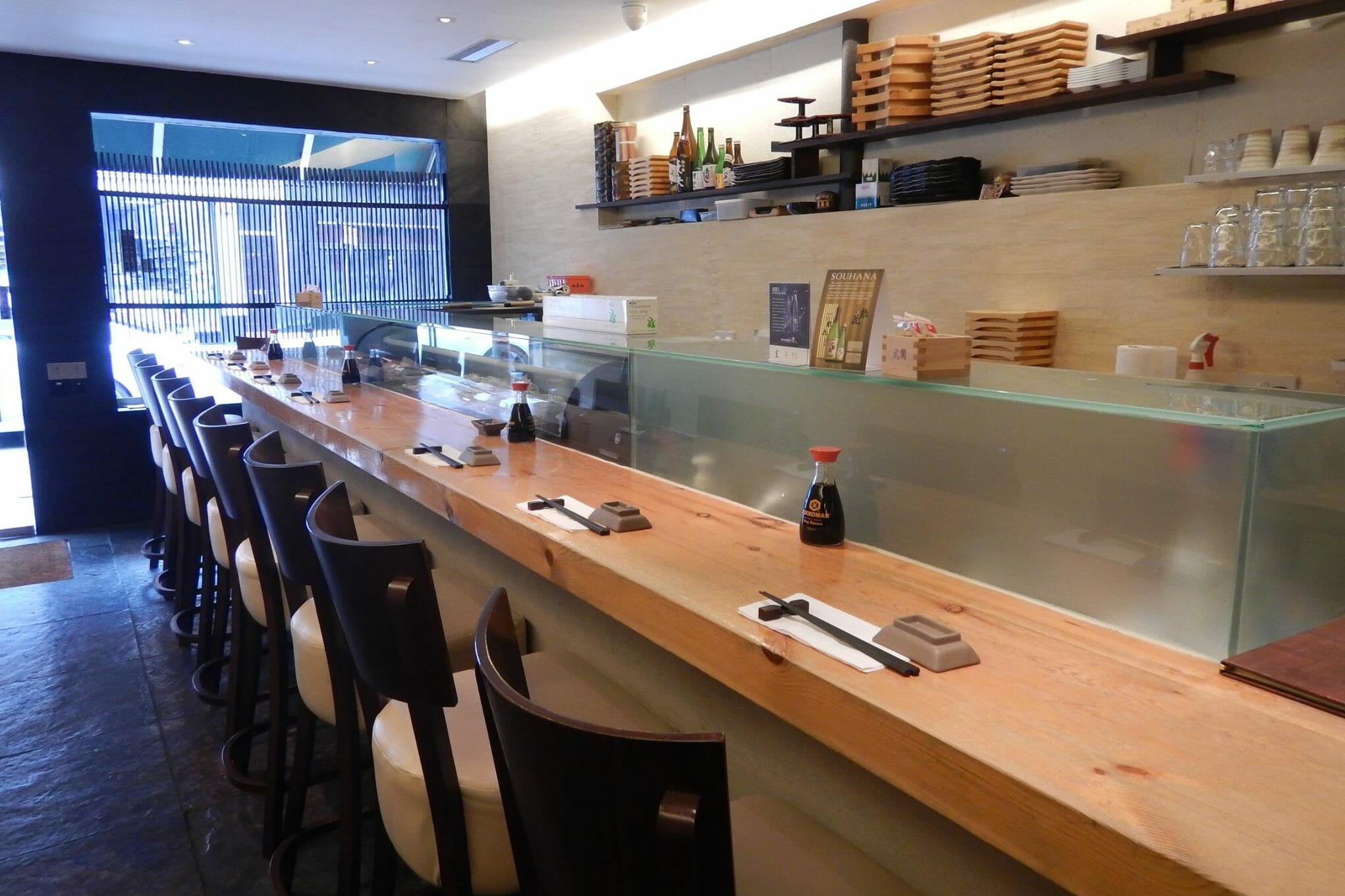 Utterly unassuming, right next to Willesden Green station, Sushi Masa is a neighbourhood gem with a convivial atmosphere. Every aspect of Japanese cuisine is represented well here, but the sushi’s a particular highlight – sake marinated oyster, fresh sea urchin, and expertly sliced sashimi keep locals coming back again and again. 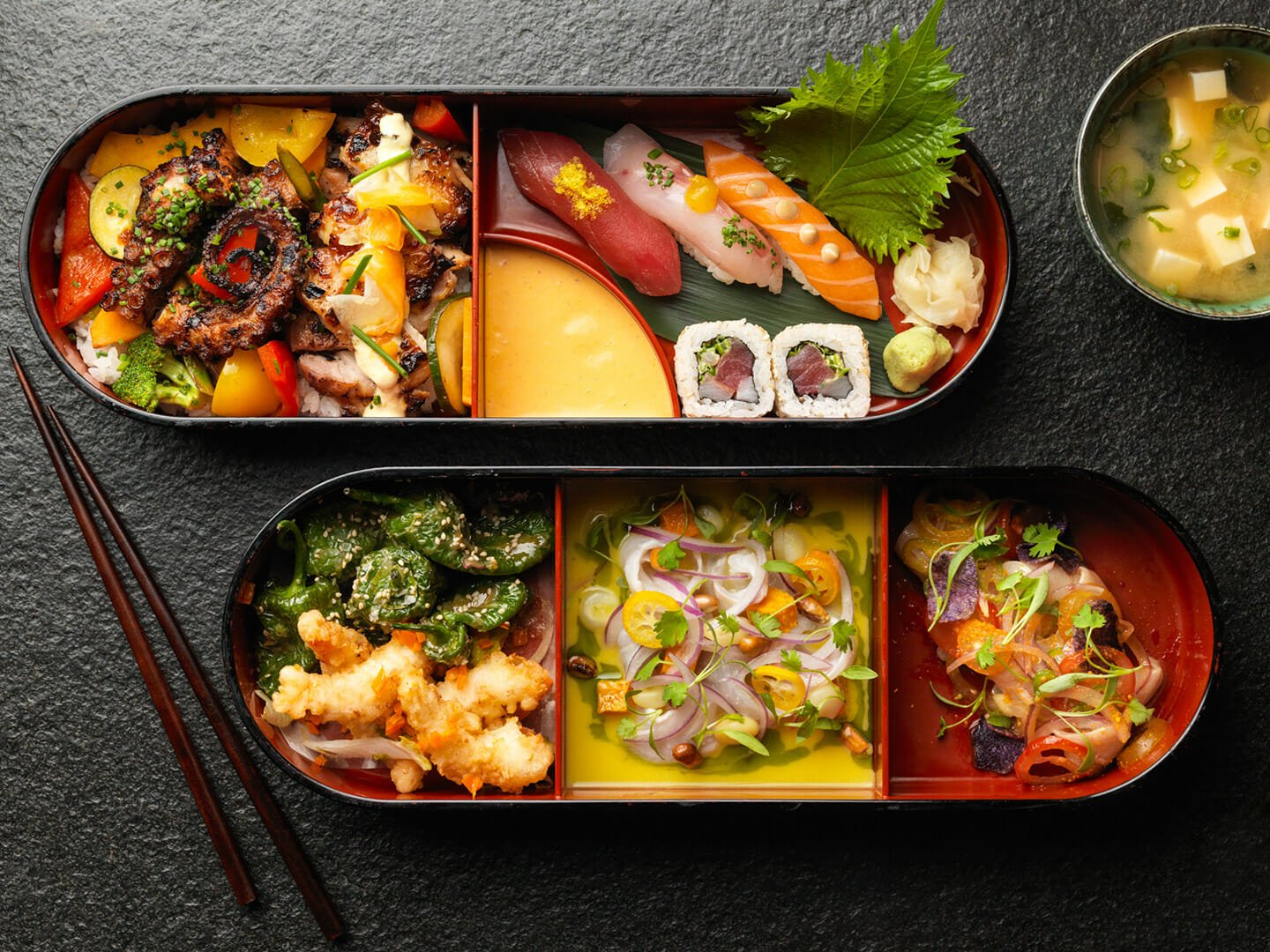 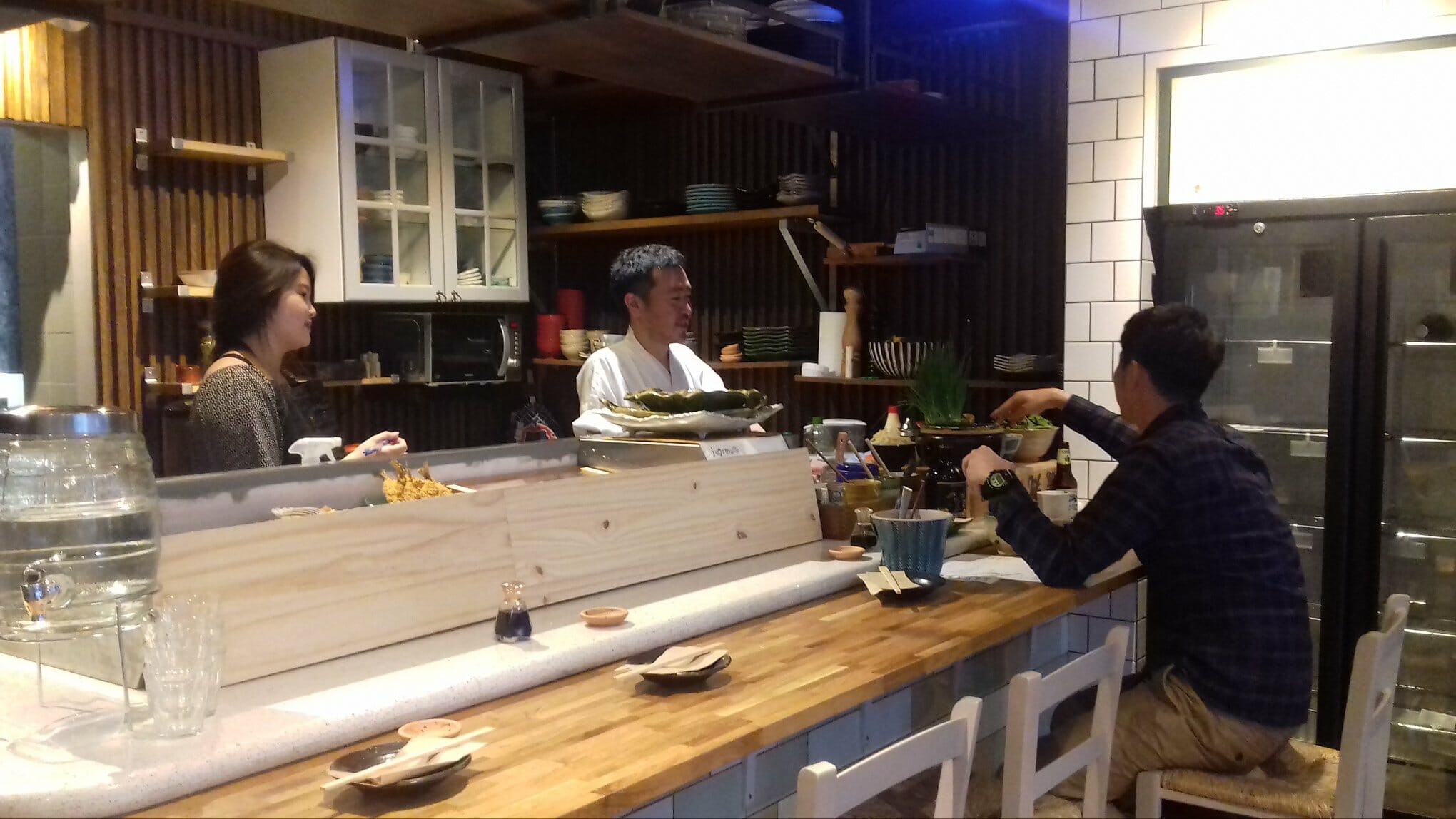 Hidden down a Soho alley is this miniscule, very authentic Japanese sushi house. Run by chef Yuya Kikuchi, who you’ll spot slicing behind the counter, it’s the real deal – lots of sake, beautiful fish and daily specials (written exclusively in Japanese) pinned haphazardly around the room. Portions are on the modest side, so don’t hold back on the tick-box menu you’ll find on your table. Go for the omakase, and take it as it comes – Kikuchi will have provided the perfect amount of soy, ginger or wasabi already. 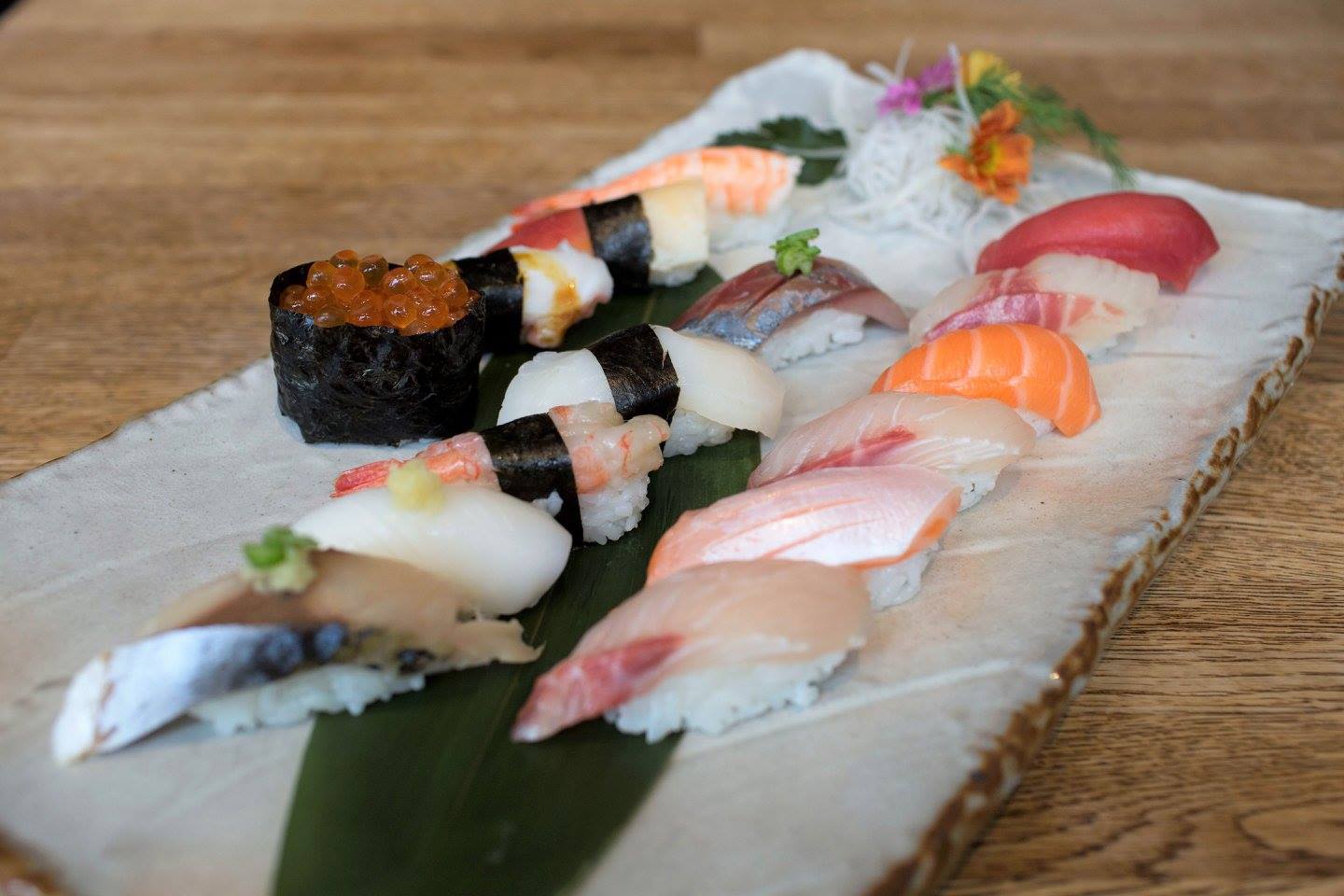 This neighbourhood spot is the product of two best friends, who decided to finally open their own sushi restaurant and “selfishly take our own piece of satisfaction for making people happy”. So, selfishly, they each devoted two years to making sushi rice alone, before a further three years studying how to slice fish correctly. And now they’re – even more selfishly – plying you with dishes like surf clam and octopus sashimi, natto rolls (hard to find in the UK), and excellent hospitality. Ugh. 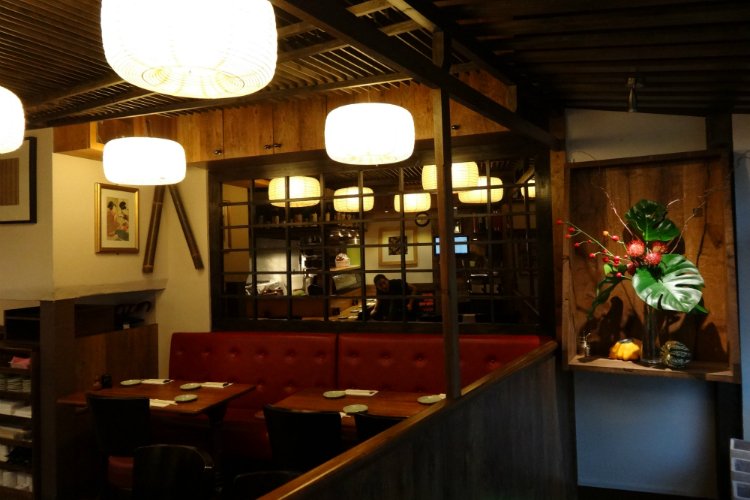 Wonderfully evocative, Jin Kichi has been a Hampstead staple for years. The centrepiece is the scorching robata grill, onto which the chefs fling skewered chicken meatballs, quail eggs, and duck with spring onion. But you’re here for the sushi – and you’ll find it in the form of perfectly executed nigiri, sashimi, temaki hand rolls and maki, served alongside shochu cocktails and plum wine.