The Best Things To Do In Greenwich

The Borough – sorry, the Royal Borough of Greenwich (to give it its proper title) has much to commend it. It is, after all, the home of time itself. And because there are so many things to do in Greenwich, it is quite appropriately the perfect place to spend a little time, too.

So, whether you want to lose yourself for a morning, an afternoon or – heck, we’ll say it – a long weekend, here are all the things you could and should be getting up to in Greenwich… 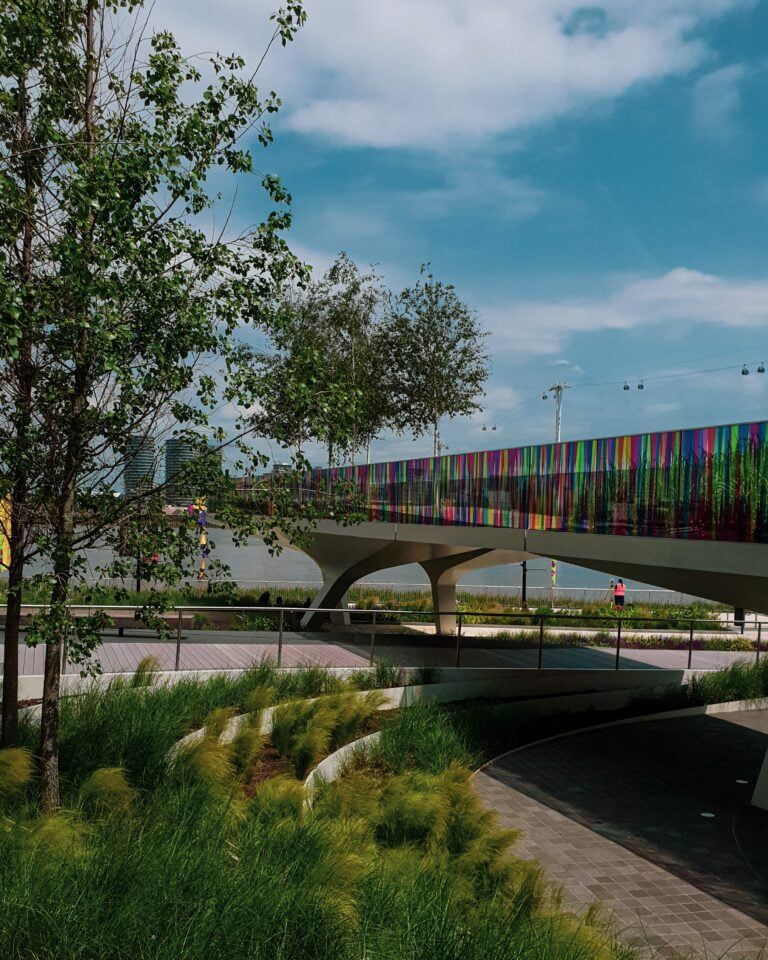 If you’re after weird and wonderful public art, courtesy of artists including Damien Hirst and Morag Myerscough, then you’ve come to the right elevated linear park (you heard). Designed as London’s answer to New York’s ‘High Line’, The Tide is, eventually, going to be a 5km-long experience (it’s currently around 1km), featuring a series of 9m high raised walkways around the Greenwich riverside. As Blondie once sung: The Tide is high, and I’m moving on (to look at more interesting pieces of public art). 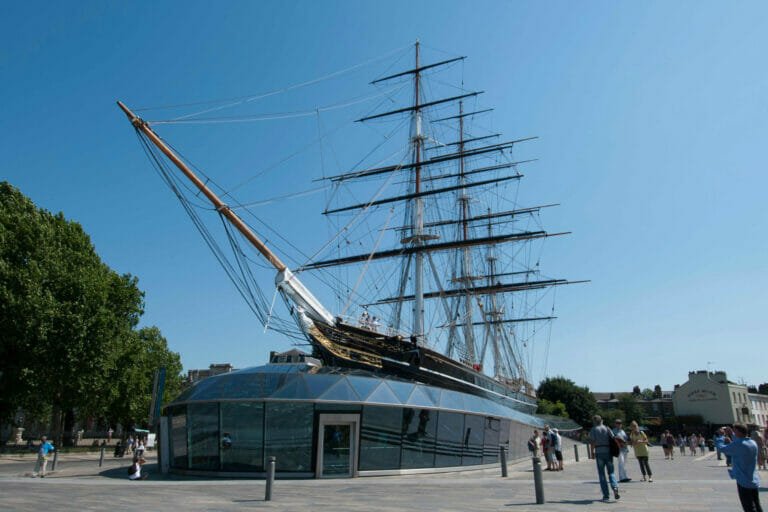 Is it a bird? Is it a plane? No, it’s fairly obviously a large historic ship. Built as a tea clipper, just before steamships took over as a primary means of sea trading, the Cutty Sark was – thankfully – beautifully preserved. Today she remains a beautiful, iconic Greenwich fixture, and all 963 tonnes of her is yours to explore – you can even climb the rigging! Cap off your trip with a stroll below the Thames by descending through the glass dome nearby into the Victorian Greenwich Foot Tunnel. 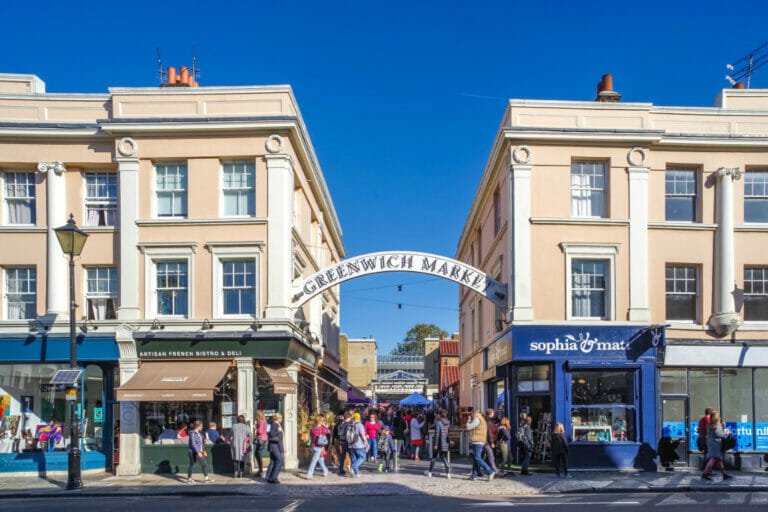 Eat, drink, purchase a range of locally-produced boutique items, eat some more! Greenwich Market is home to 120 traders, selling everything (quite literally everything) from vinyl to stained glass to hand-knitted children’s clothes to vintage hats to handcrafted spatulas (yep) – it’s an endless treasure trove of stuff. Do you need any of it? Debatable! Will you want an alarmingly high selection of it? Without a doubt! 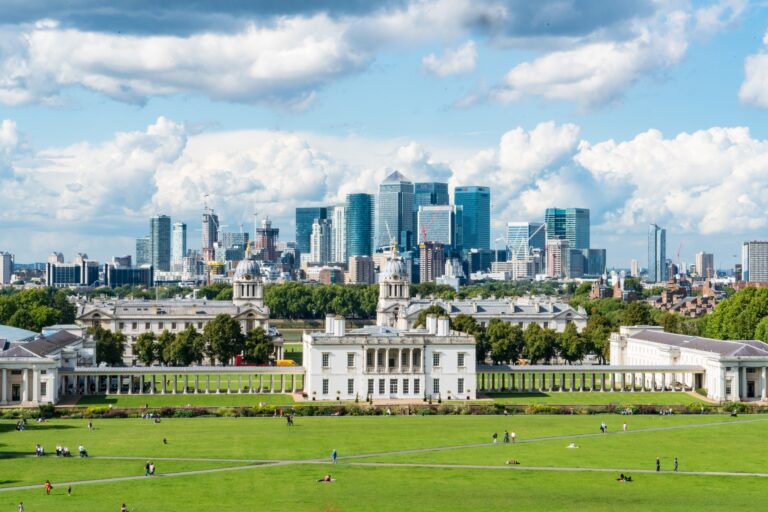 No, this isn’t Buckingham Palace. Yes, it’s really called The Queen’s House. The Queen in question? Anne of Denmark, wife of King James VI and I (that’s one King, two sets of numerals, by the way, not two Kings called James – but we’re getting distracted). The house is a classic – literally, it’s the first building consciously built in the ‘classical’ style by architect Inigo Jones, and remains one of the fanciest free things to do in Greenwich.

Up the Creek Comedy Club 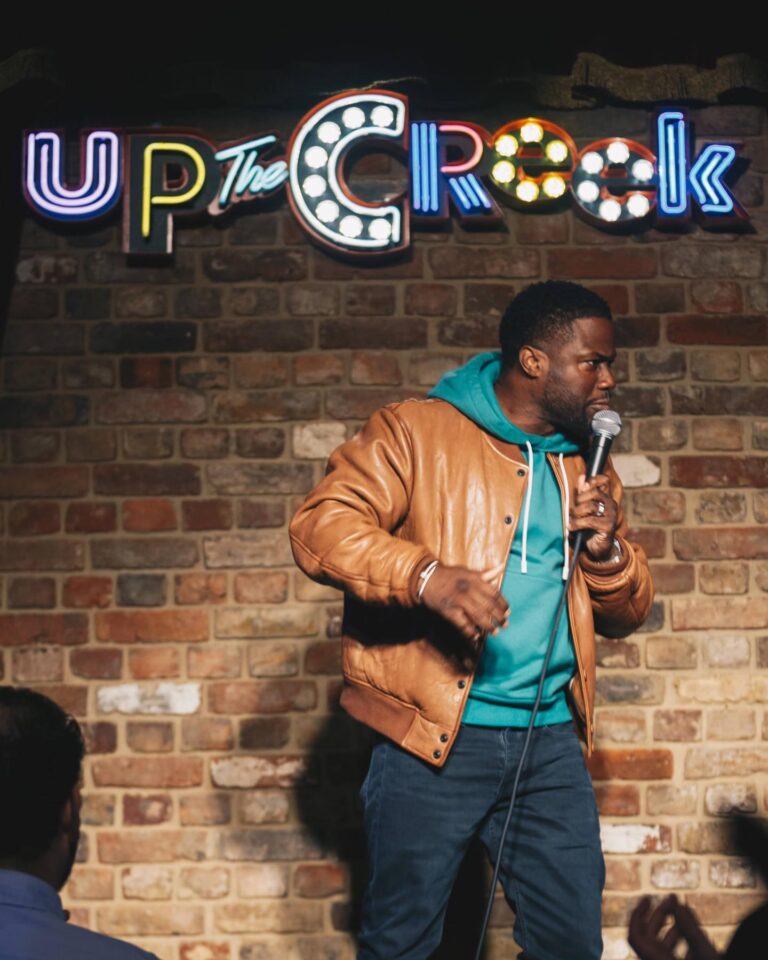 Beloved, much-missed, clearly mad comedy provocateur Malcolm Hardee was the man who launched this long-running comedic institution. Everyone who’s everyone has played there, and it’s without a shadow of a doubt one of London’s great comedy clubs. Head to a Friday or Saturday show to see the best of the UK’s club comics – or book in for a Blackout show, and watch 15 brave young comedians attempt to perform for five minutes without the audience turning off the lights. 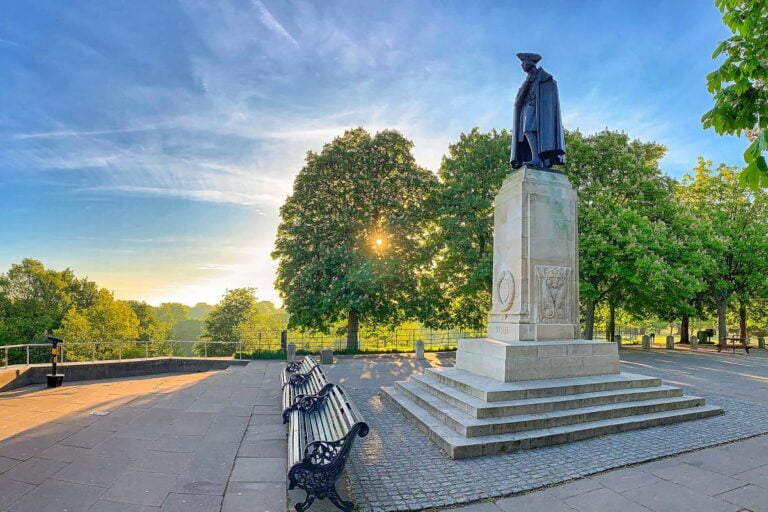 London’s oldest Royal Park! As with the majority of Greenwich, it’s extremely beautiful. And as London’s parks go, it’s up there with our beloved Victoria (Greenwich Park even has its own pavilion café – maybe that’s the measure of a brilliant park?). It’s 183 acres of verdant greenery, including a 13 acre grasslands enclosure that’s home to foxes, birds, and a herd of fallow deer, and conveniently connects many of the other great things to do in Greenwich, including the Queen’s House, the observatory and the maritime museum.

Visit All The Finest Pubs in Greenwich 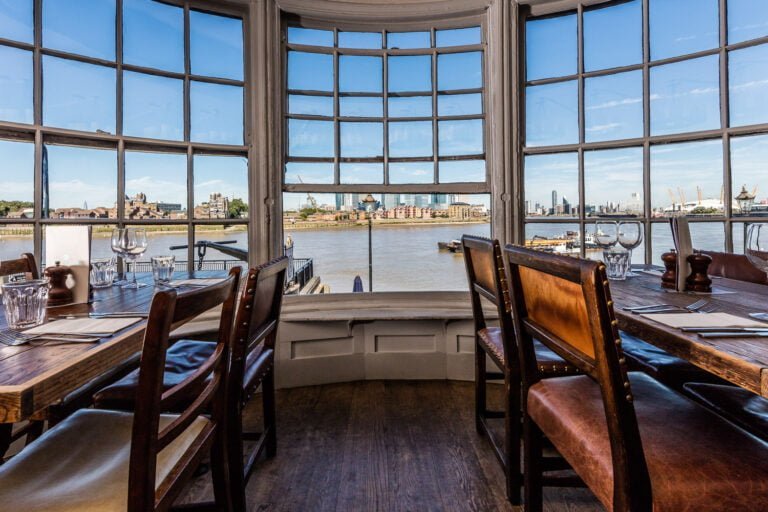 Head on a Nudge-curated bar crawl and drink in the myriad delights of Greenwich. Kick things off at the Cutty Sark, swing by the Trafalgar Tavern, drop in on the Gipsy Moth, stop off for a pizza at the Pelton arms, and then really get stuck in for the evening downstairs at Oliver’s Jazz Bar. It doesn’t get much better.
– Turns out that ‘observe-a-Tory’ isn’t just a very dull game you can play whilst watching BBC Parliament. The Greenwich Observatory (which contains the Peter Harrison Planetarium) is a treat for young and old alike – in fact basically everyone except flat-earthers. It’s also home to the Meridian line, and Greenwich Mean Time itself! Don’t be late. 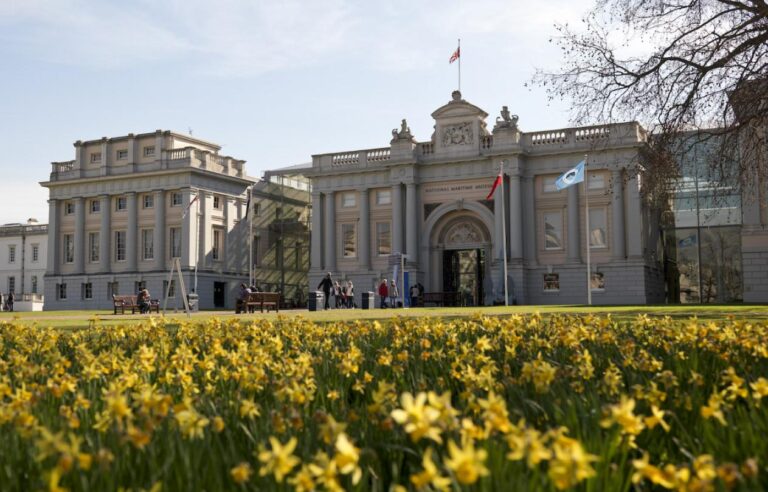 Greenwich is old, and it’s nautical, and these two things are celebrated and explored at the National Maritime Museum – a free, and particularly family-friendly, destination for a day out. Set on gorgeous lawns manicured with military (specifically, Naval) precision, the grand building is home to an array of great exhibits – currently, a particularly awe-inspiring collection of the world’s best space photography (warning, likely to make you elicit head-scratching comments along the lines of “Cor…the universe is…big, isn’t it?”). 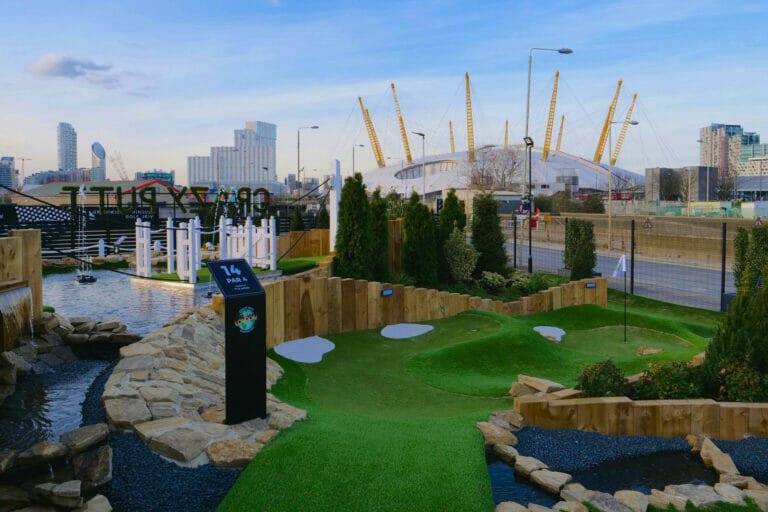 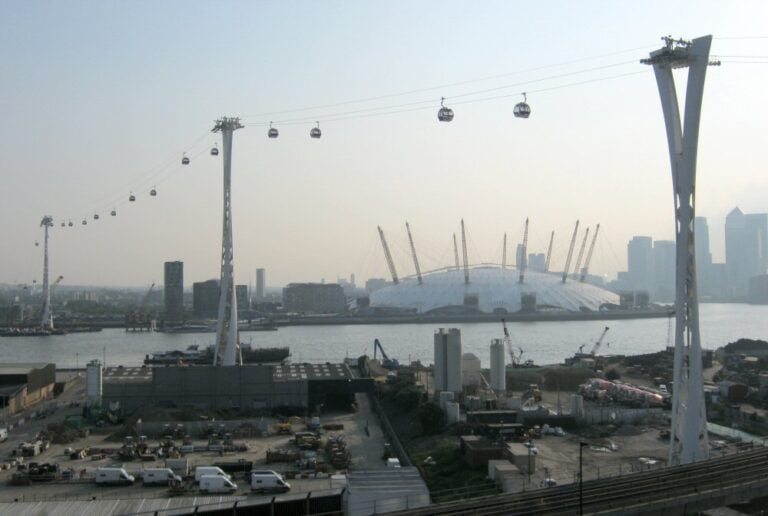 Yes, we can see you smirking from here. Whilst all Londoners are dimly aware of the cable car that connects a slightly obscure peninsula of North Greenwich with a truly obscure area of the Docklands, very few have ridden on it. And more fool them, because it’s fantastic! It’s a seriously under-appreciated viewpoint in London, taking in panoramic vistas on both sides of the river, and the bustling nautical comings-and-goings on the river below. Honestly, just try it. 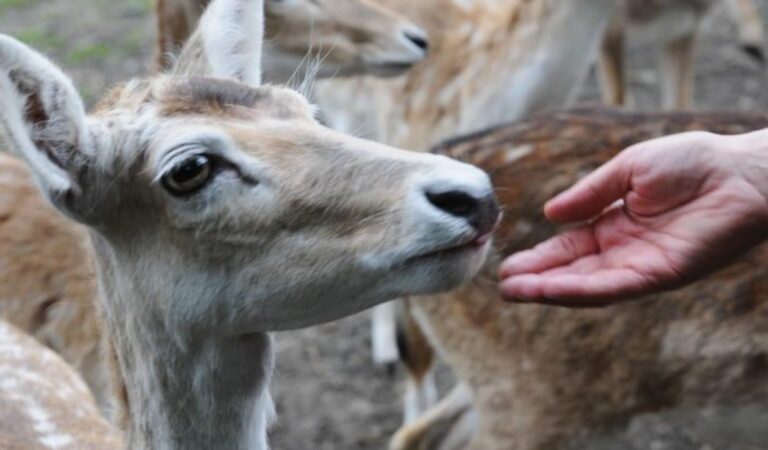 Admit it. At some level, you want to go to a petting zoo, and have your picture taken with some lairy looking goats and some indifferent pigs. Well, at Maryon Wilson Animal Park, you can. It’s a smashing day out for a family day (or, you know, a solo adult – you do you). Just get there early if you want to get into the deer pen (again, admit it – you do). 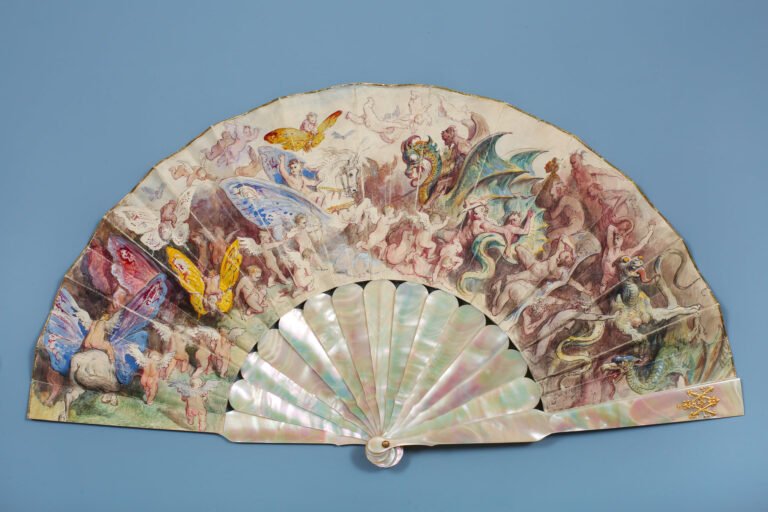 Yes, this place does only fans. And that should get your pulses racing, because it holds an incredible collection of 5,000 antique air-wafters under its roof! But quite seriously, this is one of the most endearing and unusual museums we’ve come across in London, and it’s genuinely worth a visit. Particularly for a spot of tea in the orangery afterwards. 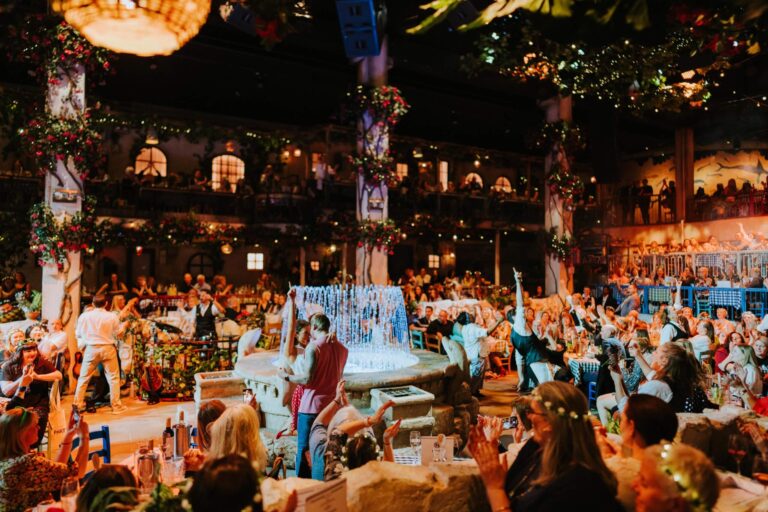 An experience which will either leave you completely cold, or else be the greatest theatrical experience of your life. There is simply no middle ground. However, due to the extraordinarily-powerful pull of the music of mysterious Swedish geniuses ABBA (alchemists are still trying to unpick quite how they managed it), this all-singing, all-dancing voyage to the Isle of Skopelos is genuinely hard to resist. So go on – take a chance (take-a-take-a-chance-chance). 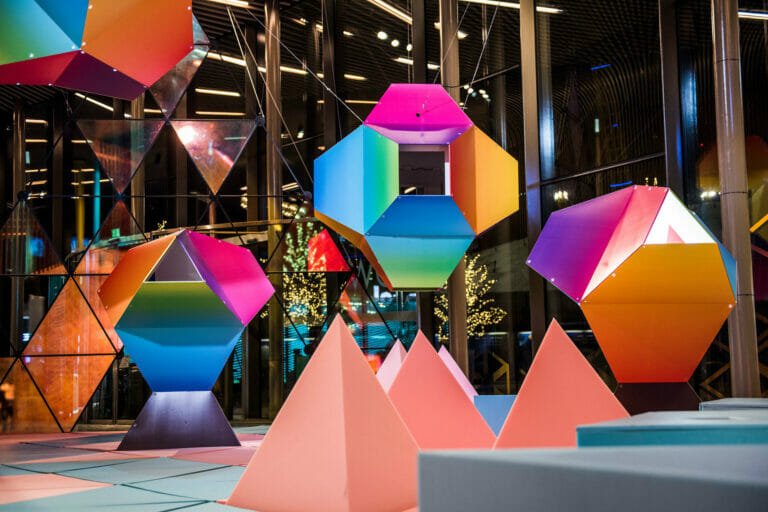 NOW Gallery is all about contemporary art. And just in case you didn’t catch that from the shouty lettering, they’re really hammering it home by showcasing cutting-edge modern art installations – which have previously included AR-enhanced alien landscapes, pop-up jazz clubs, and a sea of yellow origami cranes. 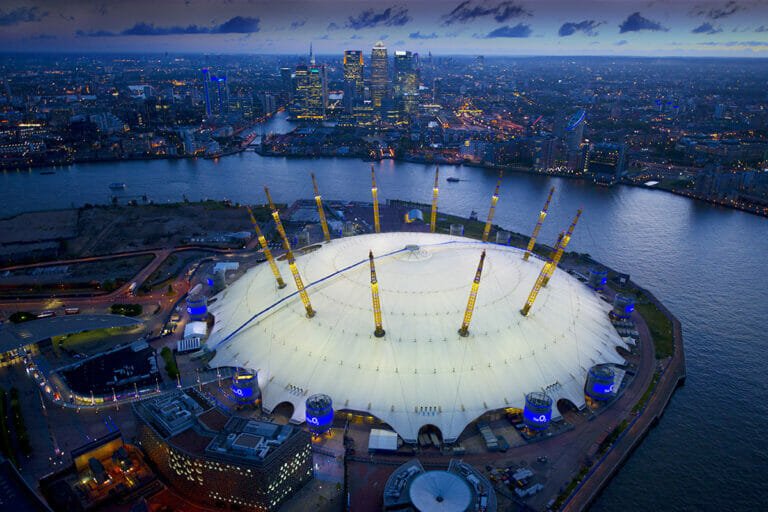 The ill-fated millennium dome was reincarnated from its past life as a walk-through exhibition of the human body (remember that was a thing?) as one of London’s top live event venues. Now you can head in to see everything from comedy to boxing under its tent-like roof – or explore the other side of that roof by climbing up and over the O2 (with the option to refresh yourself with a glass of Champagne at the top). 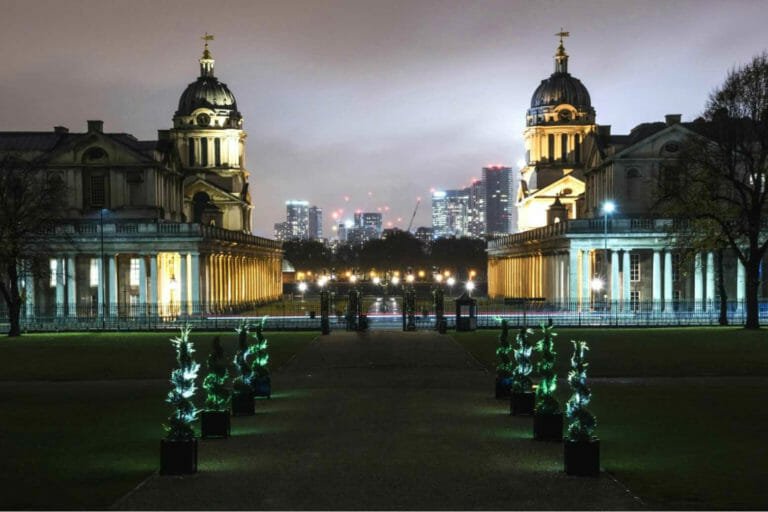 Few boroughs (Royal or otherwise) lend themselves to a walking tour as much as Greenwich. You can always set off for a stroll with nothing but a sense of adventure and The Nudge as your guide – but, if you’re after something a little more personal, then why not sign up for a walking or cycling tour. The groups are small, the guides are knowledgeable, and the sights are very much worth seeing. You won’t regret it.
–

Eat at ALL the top restaurants in Greenwich 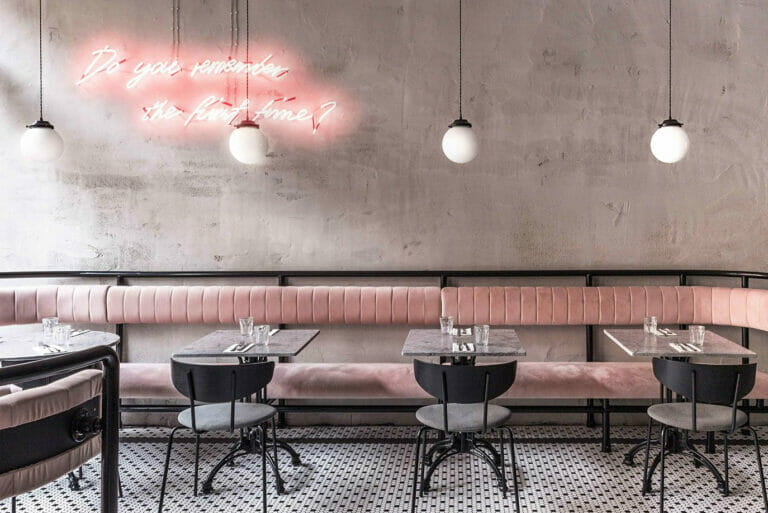 There’s plenty of what you fancy down in in Greenwich. Whether that’s churros in the market (and trust us, it really is churros in the market), proper traditional pie with mash and parsley liquor at Goddards, one of the last remaining authentic Pie & Mash-eries in the city, or sensational fish and chips at The Golden Chippy (voted London’s best restaurant in 2016). Hearty, satisfying, and perfect surprise-nap-on-the-Jubilee-Line-home cuisine, basically.

That was fun, wasn’t it? So are these activity bars.