Many new restaurants open in London each week.

It’s a lot to digest.

And it’s tricky when you want to be one of the first people in through the doors… but also want to know whether it’s actually going to be any good. Bringing together the most highly anticipated new additions alongside recent openings from the past few months that are leading the vanguard of the London restaurant scene, we’ve put together a short-but-sweet-with-savoury-notes rundown of the hottest eateries in town: this is where to eat right now.
– 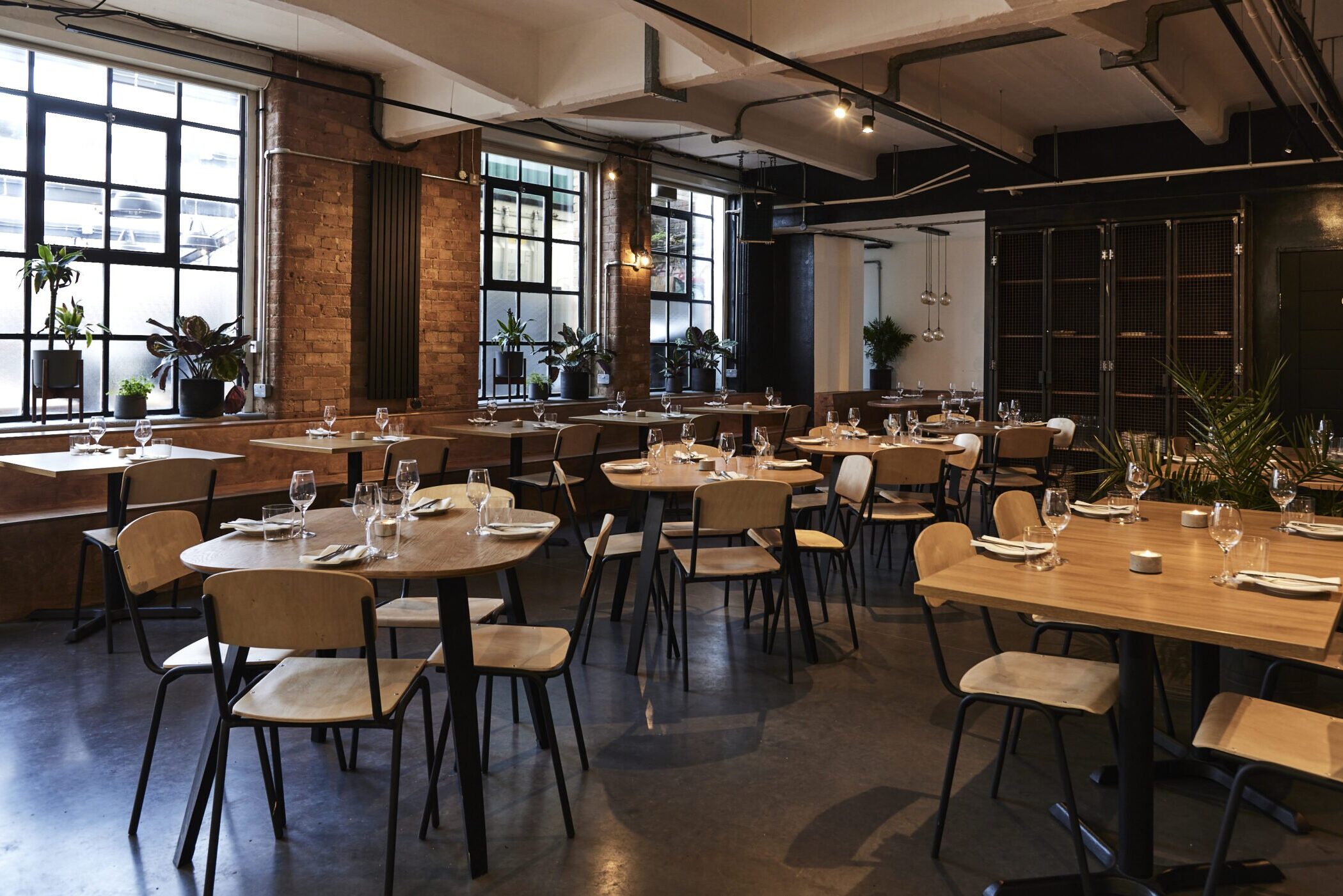 Opening a restaurant dedicated to open fire cooking might sound like a bold move for a chef with a beard as long as Andrew Clarke’s. But if anyone can handle the heat, it’s him: he co-founded St. Leonard’s with Jackson Boxer (overseeing the lively fire cooking there), and now he’s striking out with this lively, clattering, mostly al fresco eatery opposite the 40ft Brewery (whose suds, unsurprisingly, seem to find their way into the dishes too). And if you’re after a nightcap spot, you can check out the latest bar from the illustrious Brilliant Corners, Mu… 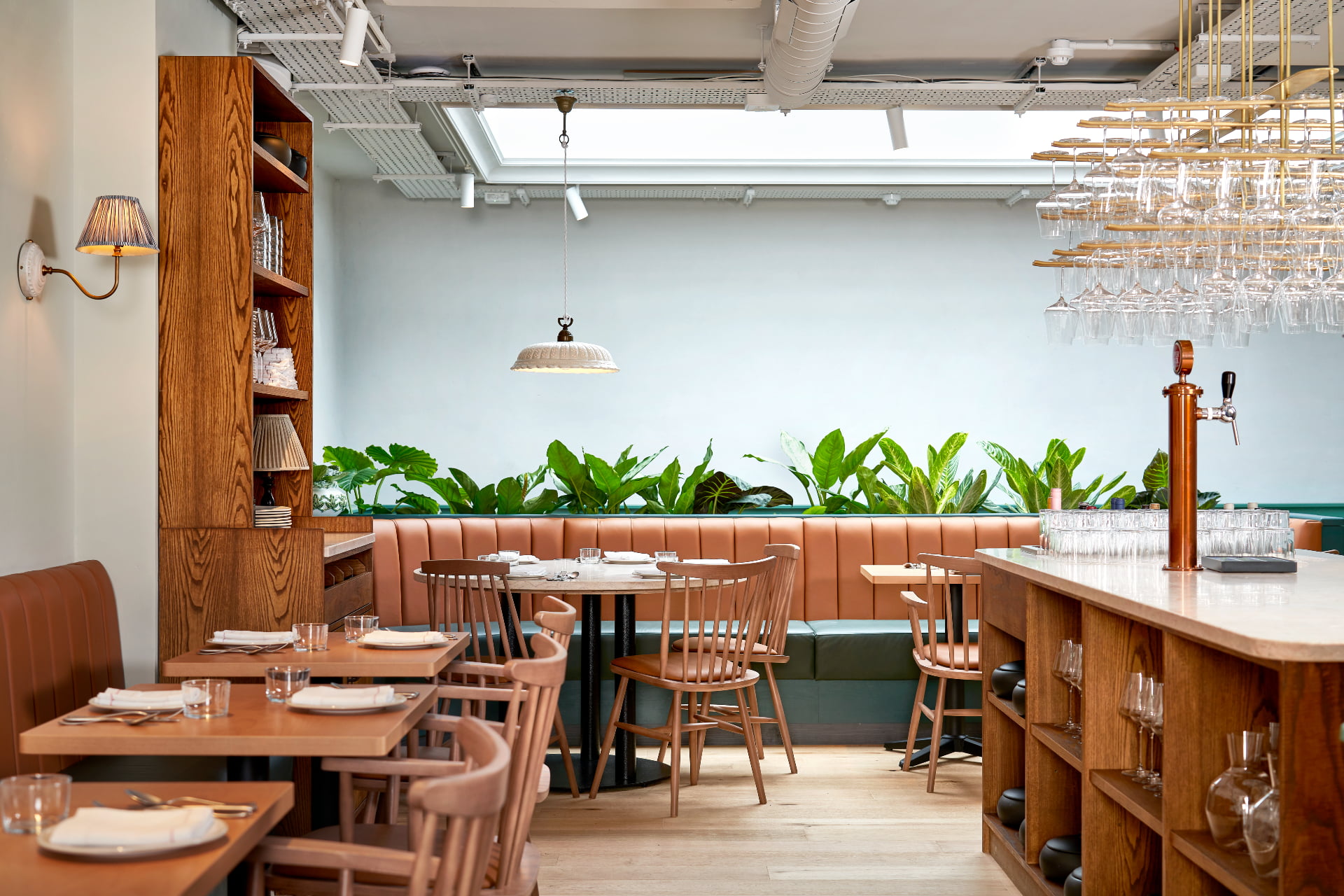 When Nuño Mendes opened his latest restaurant, he created a love letter to Lisbon. No, literally – it’s there on the wall, hanging amongst the black and white photos and colourful illustrations of the city. And you can feel the love in the food, too: small plates, wandering from the Azores (cured amberjack with orange & onion); to the rural Alentejo region (with acorn-fed black pork chop and fermented red pepper paste). Pretty much every top chef in London right now had their start with Mendes – he’s the chef that had celebrities trampling over each other to get into Chiltern Firehouse; his one-table restaurant Mãos won a Michelin star while chucking all restaurant conventions out the window. And this April, he’ll be launching a chef’s table experience at Lisboeta, too… 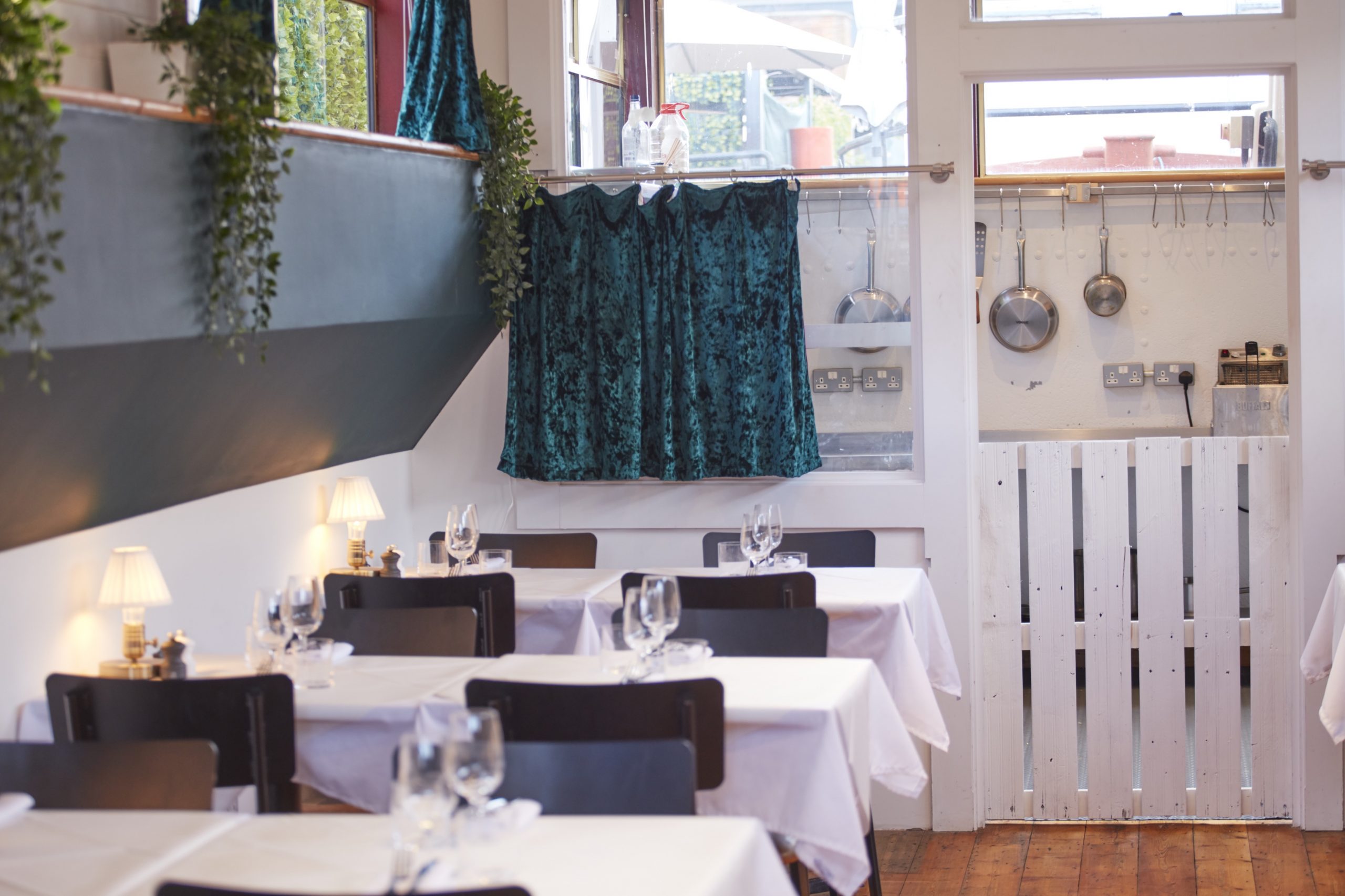 Caravel (literally) floats around the border of Islington and Hoxton. It’s a converted barge tethered up outside an iconic photography studio on Regent’s Canal. On deck you’ll find brothers Fin and Lorcan Spiteri; the former putting together exquisite Blood Orange Margaritas and Rhubarb Negronis, the latter clattering away in the teeny tiny kitchen and somehow producing dishes like duck croquettes with wild garlic aioli, and caramelised banana & almond tart. Unlike some of the bigger names on this list where everyone would go to some pretty undignified lengths to get a reservation, Caravel still has a slightly undiscovered feel about it, and that makes it all the better. 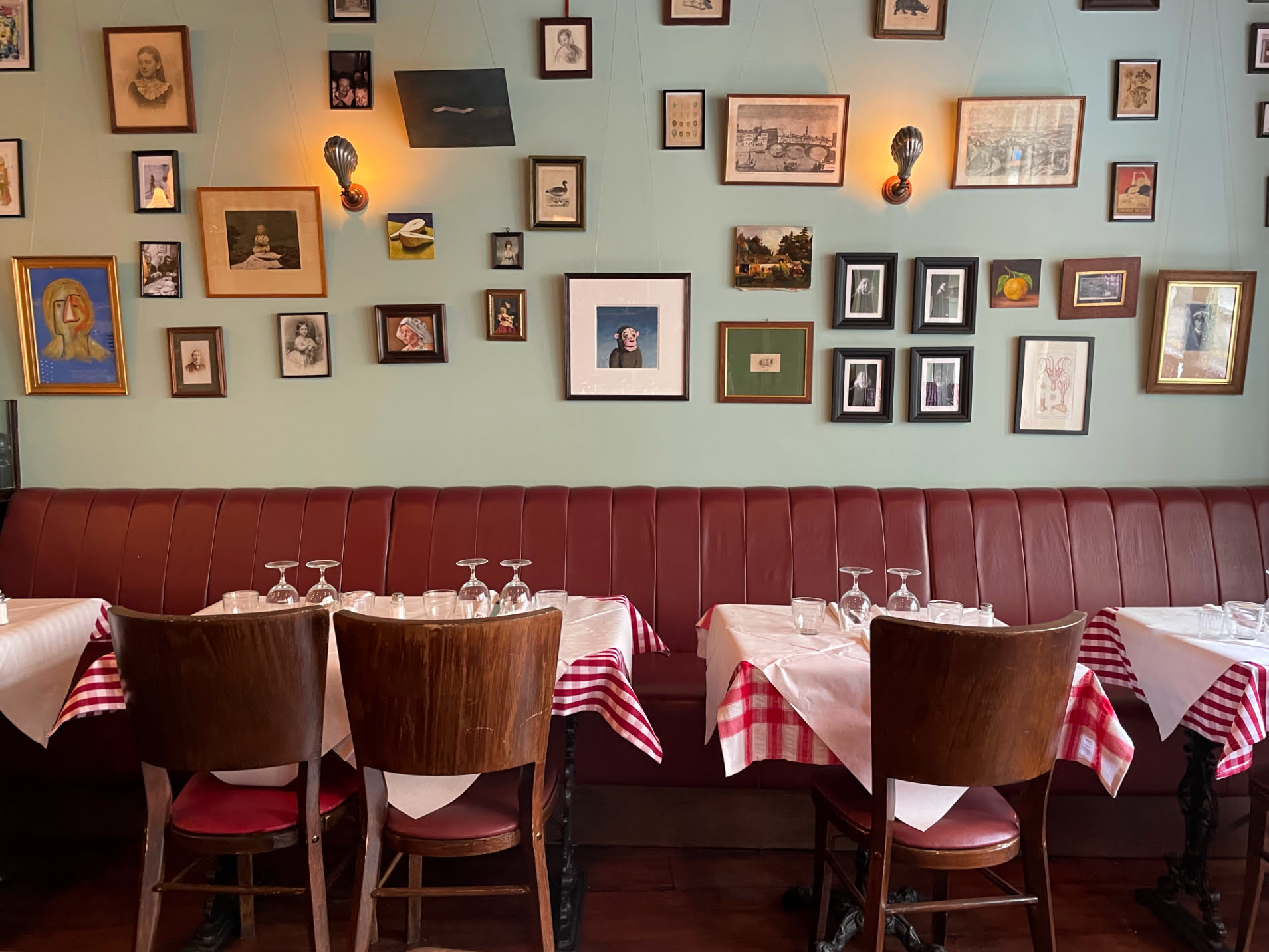 Russell Norman, the man behind the iconic Polpo restaurants, has opened a new kind of relaxed, Italian eatery and – spoiler alert – it’s just as much of a smash. Whereas Polpo introduced the small plate dining (or cicchetti, as the Venetians call it) and glamorous but industrial interiors that were to dominate the city for the next decade, Brutto takes things in another direction. Its name is inspired by the Italian adage ‘brutto ma buono’, meaning ‘ugly but good’ – and it does have a kind of unashamedly retro, unfussy aesthetic about it. Given its location near Clerkenwell – historically London’s Little Italy – it looks like it could be a family-run trattoria that hasn’t changed its interiors in years (except for the large-scale comic-styled mural, that is). And the food is as far from small plates as you can get – big, heaving platters of comfort food to feed a whole family. Or you and your date. 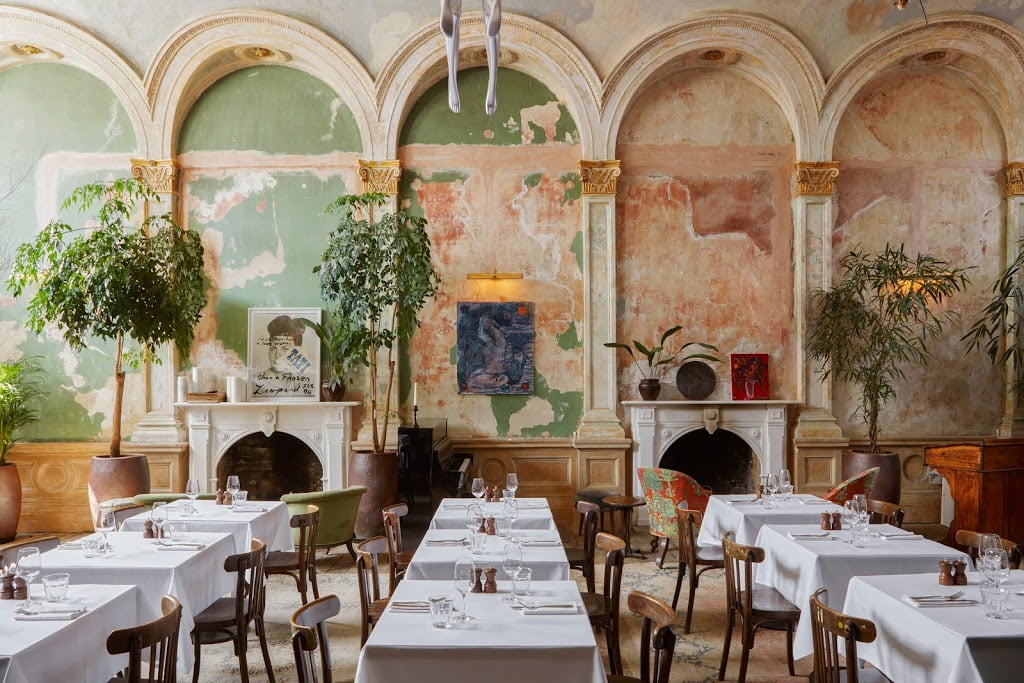 This place is so hot we’d be really surprised if this was the first you were hearing of it. So what’s the big draw? Well, for starters it’s stunning. Set at the top of an historic, listed building that was once an old courthouse, the dining room is the definition of faded grandeur. Peeling wall plaster, roaring fireplaces, and threadbare rugs offset the crisp white tablecloths and stylish original artwork. Up above is a mezzanine level populated with expansive, semi-circular booths. But what stops this place from being all style and no substance is a stellar menu from Florence Knight (ex-Polpetto, coincidentally). Deceptively simple-sounding European dishes sing with the touch of a deft hand. 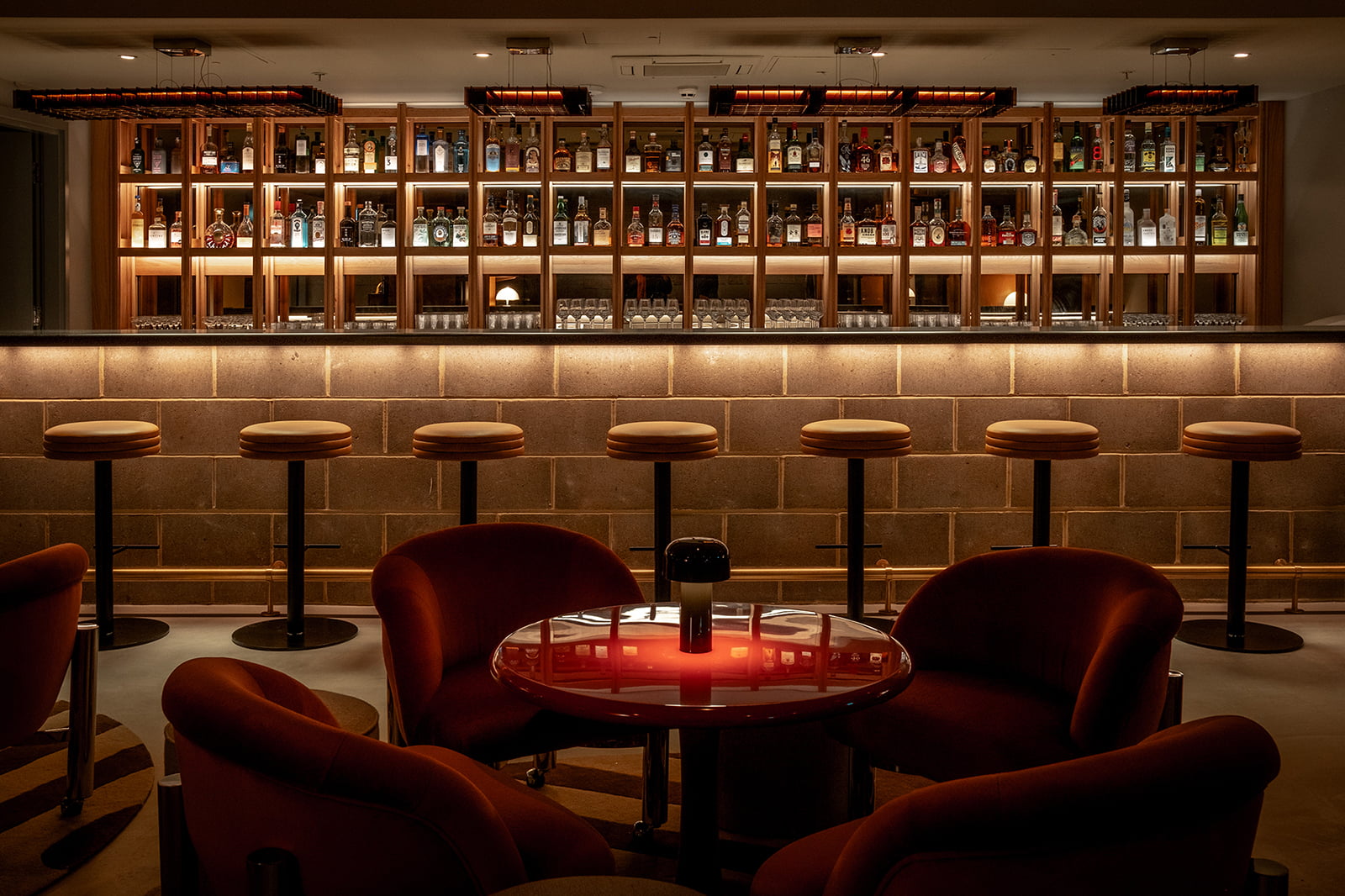 Ryan Chetiyawardana – a.k.a. Mr. Lyan – is one of the most inventive mixologists in the city. He spends just as much time shaking up drinks as he does in his booze laboratory. At Super Lyan, he worked out how to pre-batch drinks and serve them without any perishables like lemon & lime. At Lyaness, he invented new ingredients super-charged with flavour, like Infinite Banana and Purple Pineapple. So at his latest bar, Seed Library, he’s doing something entirely novel: tackling classic cocktails. 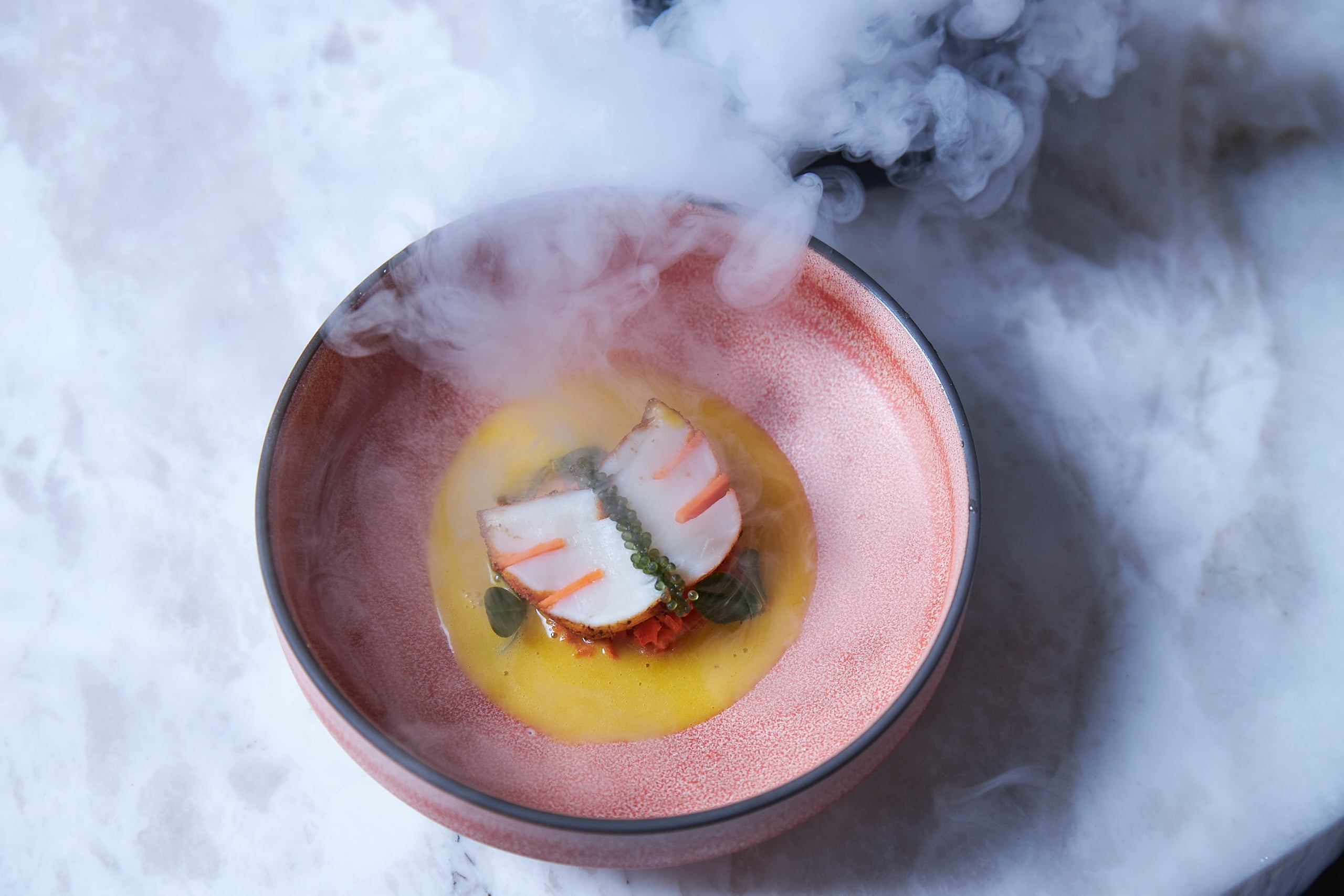 Great British Menu chef Kerth Gumbs’ solo spot has brought something totally new to Southwark. Set in a modern, industrial space, it’s a fine dining restaurant that does away with any stuffiness, and instead lavishes you with a series of dishes intimately tied to Gumbs’ Anguillan heritage, from scallop and lobster served in clouds of dry ice to crab johnny cakes with scotch bonnet sauce – an experience that made Jimi Famurewa think “Gumbs might be a genius”. 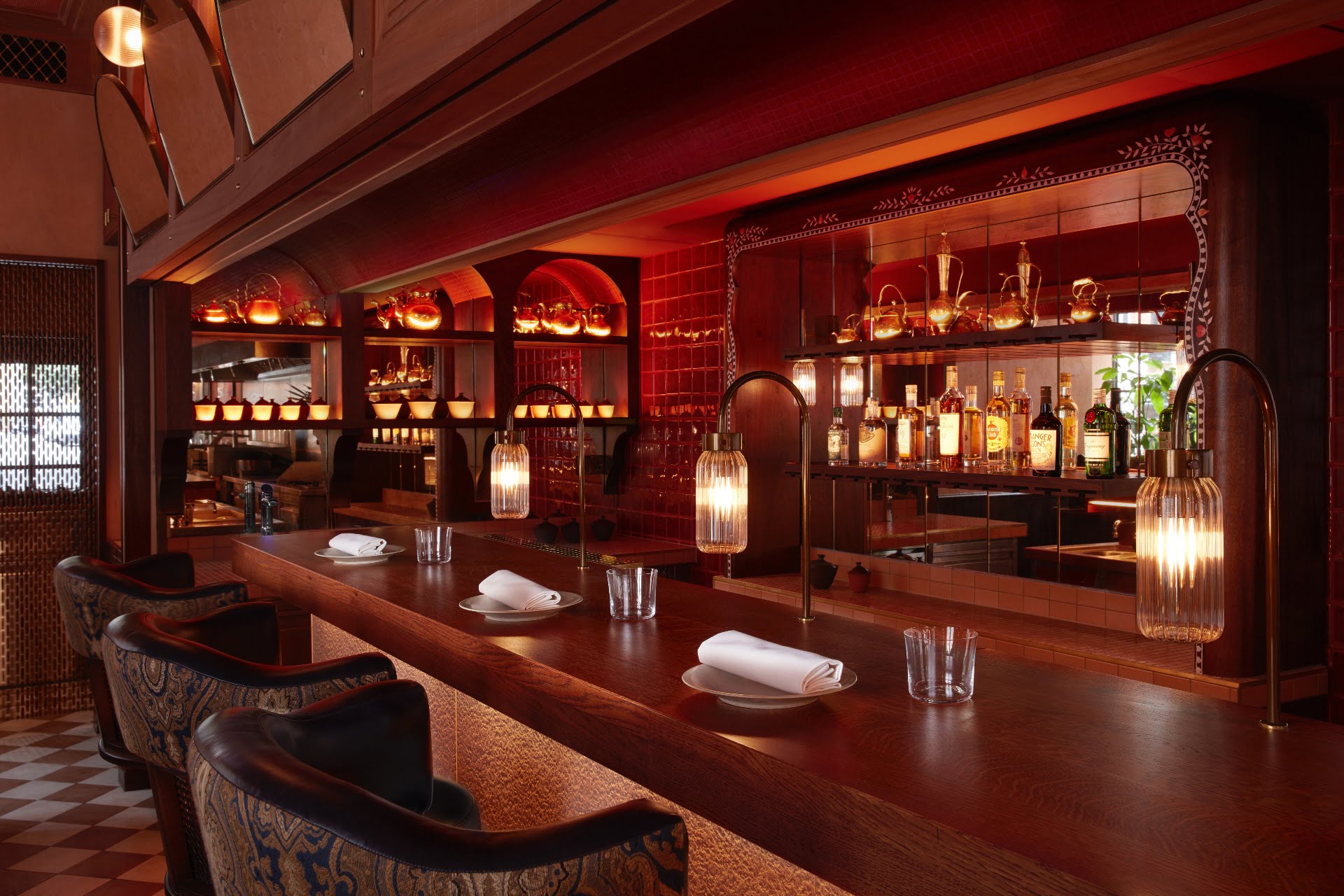 Widely hailed as ‘the new Gymkhana‘, BiBi is the long awaited restaurant from Chet Sharma. And having been Head of Development for JKS (the team behind Trishna, Lyle’s and Gymkhana), the comparison’s not entirely unexpected. This Mayfair spot is a warm, woody haven with deep red hues, low lighting and Rajasthani design touches. And what he’s laying down on the tables here is exceptional – dine on dishes like wood-grilled Lahori chicken, Cornish native lobster tikka, and lamb belly galouti, whose spices are all plotted out across a map of India so you can plan your own culinary grand tour. 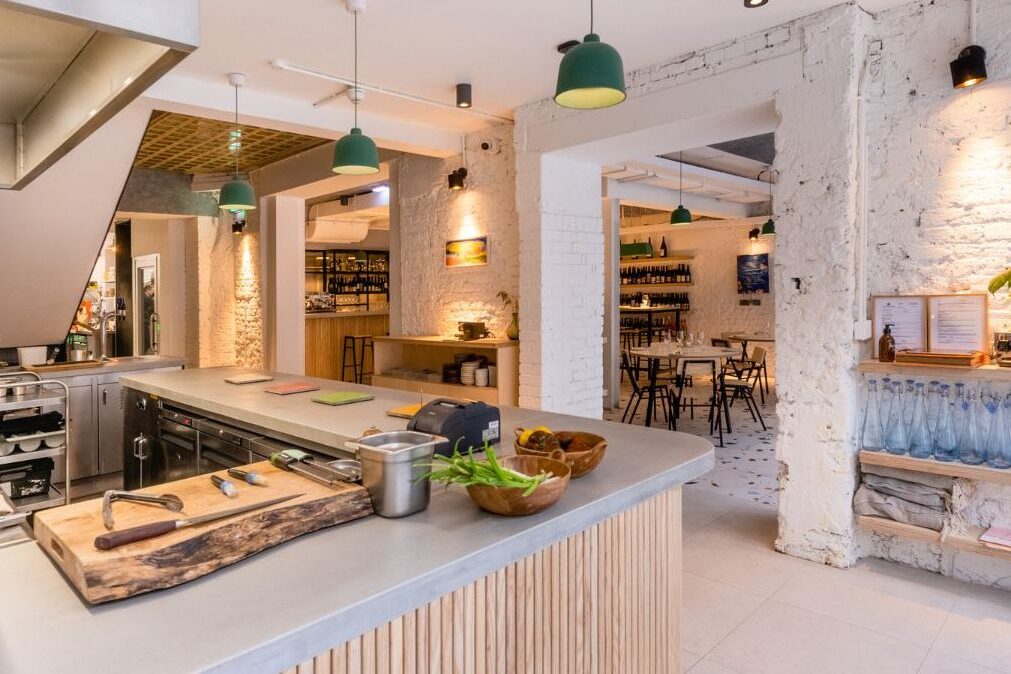 Carousel’s best known for its never-ending stream of international guest chefs taking up the pans, but since its move to bigger premises, it’s their own casual offering that’s been stealing the limelight. Chef and co-founder Ollie Templeton heads up the wine bar here, which boasts an all-day offering of mouthwatering, moreish small plates that call to mind some of the most popular dishes that have appeared at Carousel through the years. Add to that a funk soundtrack, relaxed interiors and one of the strongest selections of natural wine in the city, and you’ve got what Jimi Famurewa considers to be “a dizzyingly impressive achievement.”

The Barbary Next Door | Covent Garden 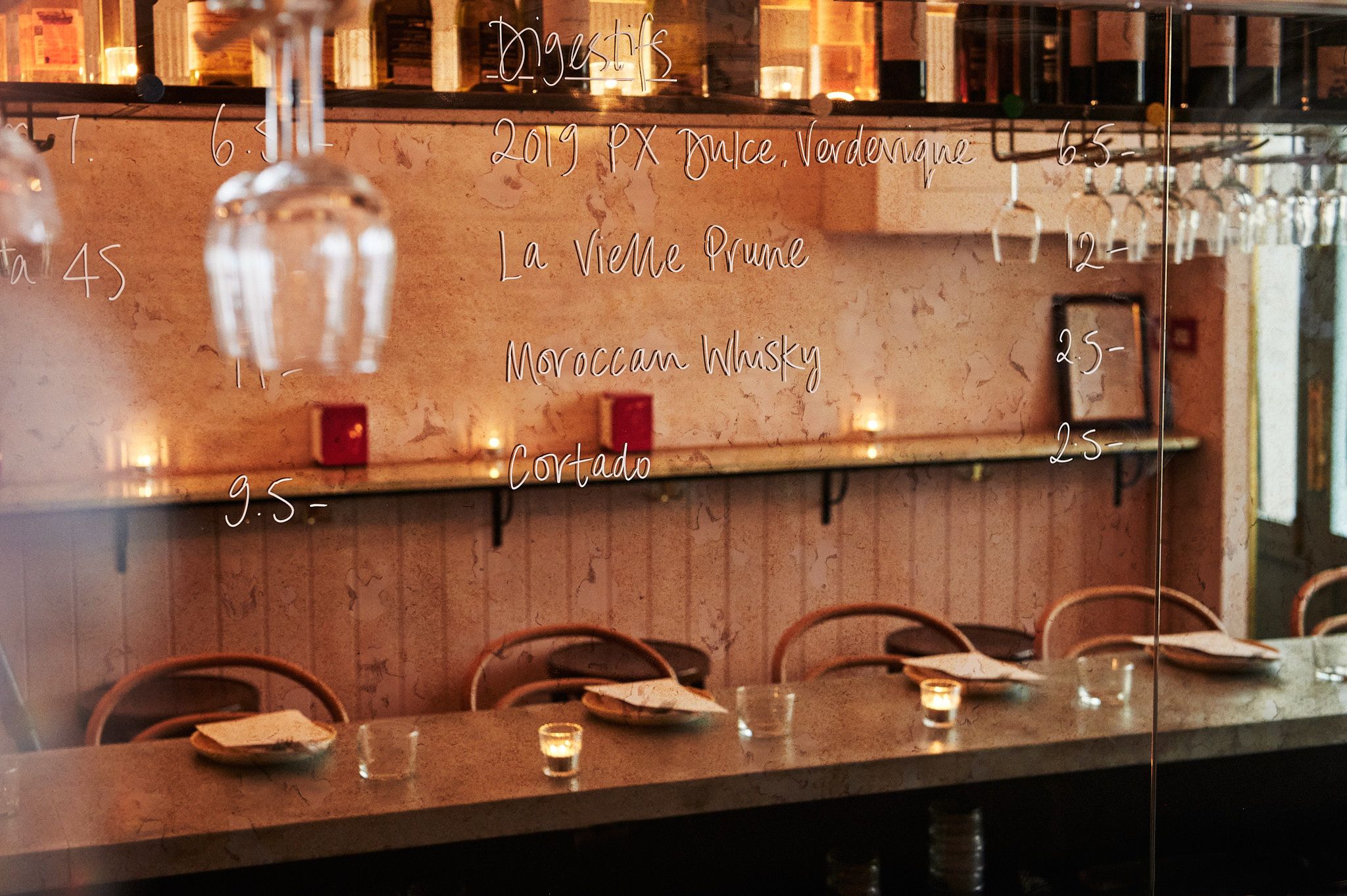 It’s hard to measure up to The Barbary. So it makes sense that the only thing that could go next door to the iconic Covent Garden restaurant is… well, another Barbary. Just as intimate as its predecessor and boasting another zinc-topped dining counter, TBND too focusses on that mouthwatering culinary cross-section of North Africa, serving those now-famous flatbreads, dips, and inspired sharing dishes. But here, there’s also a distinct lean into wine courtesy of top sommelier Honey Spencer, who’s put together a list of Old World, Moroccan and wild card bottles. And the icing on the cake? They’re now serving an amazing breakfast… 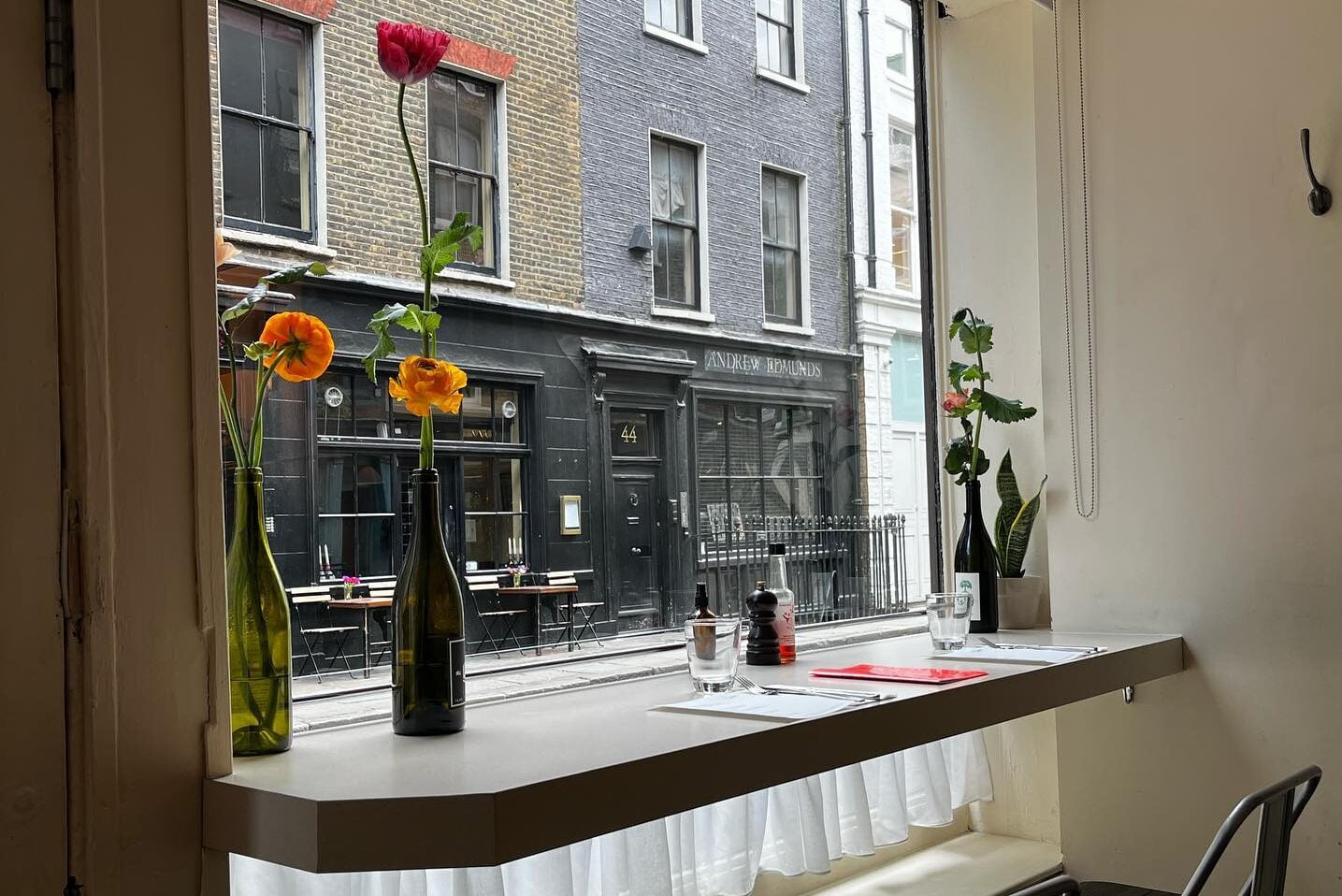 Hanging out at the back of the list: the cool kids. First up, Rita’s, a London institution that’s appeared in various guises over the years – Hackney dive bar, City bodega – and has finally found its permanent digs on Lexington Street in Soho. Opposite the perennially romantic Andrew Edmunds, this is a place for grown-up debauchery. The menu is a roiling mix of nostalgic Americana, Mexican and Italian influences: you can pop in for stylish, fiery gildas and a mini martini, and leave three hours later having somehow been persuaded that a half dozen oysters, a bucketload of margaritas and clams with fried Idaho scones were suddenly all you wanted from this world. 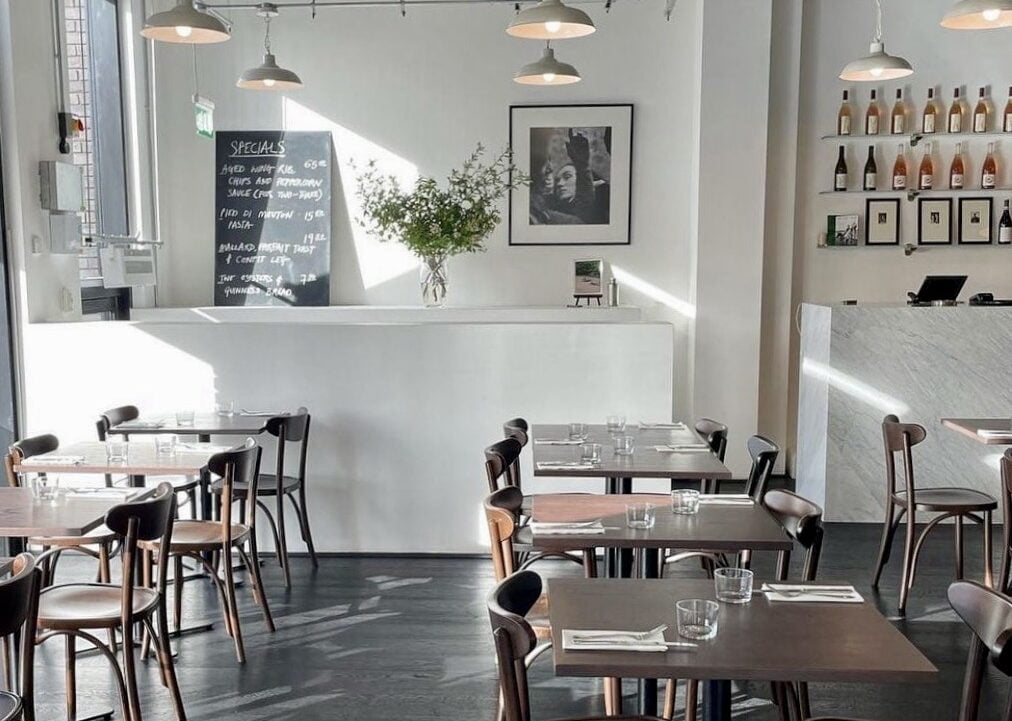 Open since the late summer of last year, Café Cecilia’s star is still burning bright. And unlike so many hype-beasts it a) totally deserves it, and b) doesn’t seem to realise how cool it is. Inside, it’s an unflustered, monochrome set-up with smart wooden seating and a network of industrial pipes overhead that seems genuinely functional rather than purely decorative. The service is warm and friendly. And the menu, put together by the brilliantly talented Max Rocha, nods to his Irish upbringing with other delicious Italian-inflected additions like sage & anchovy fritti; grilled calcots with romesco and a deep-fried bread and butter pudding.

Want to know what’s new in the city? Check out our guide to London restaurants opening soon