Given the sheer number and variety of tourists & locals who regularly flock to Covent Garden & Holborn literally every day, the watering holes there have to be able to cater to – pretty much – anyone on earth.

So it’s no surprise then, that they’re so bloody good.

There’s eclectic Victorian gin parlours and candlelit wine caverns; cocktail bars with acrobats performing on your table; and subterranean pastis bars with a dedicated area for the noble sport of pétanque. 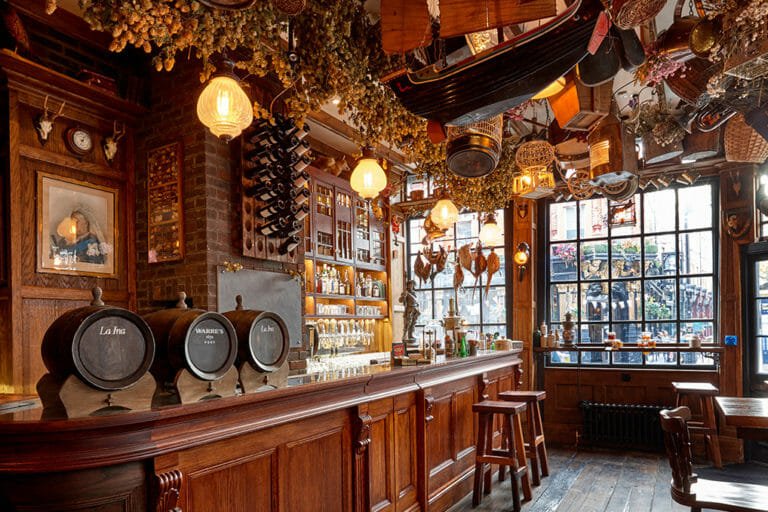 Mr. Fogg’s Tavern is exactly as Dickensian as it sounds – it only opened a few years ago, but stepping inside is like entering a cosy, grog-filled inn from the 19th century. Upstairs is decked out as a Gin Parlour & Salon in which you will, predictably, find lots of gin… and, less predictably, an array of other 19th Century-inspired cocktails served from a marble bar that’s located inside a room which looks as though the Victorian era exploded inside it.

Lady of the Grapes 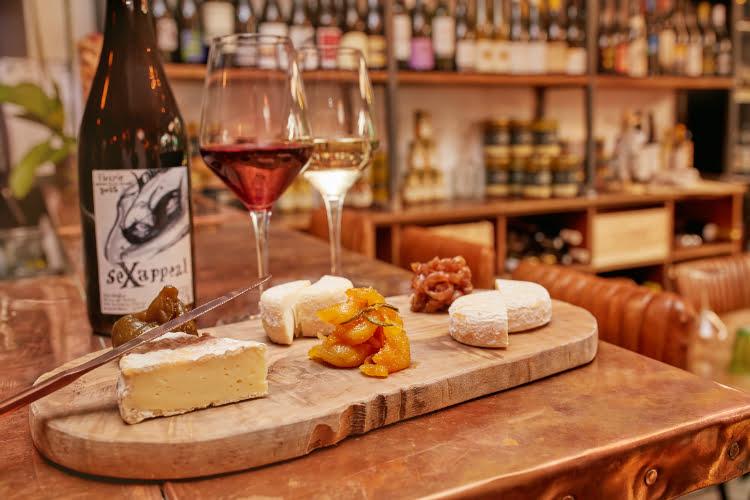 Lady of the Grapes feels like the sort of bar that’s been around forever – comfortably worn leather seats, old vintage tables, wine bottles lining every inch of the walls – despite only opening its doors a few years ago. Turns out they’ve just got the recipe immediately right with gallons of vino (mostly grown by female producers, hence the name), and cheese, charcuterie, and fondue to share. 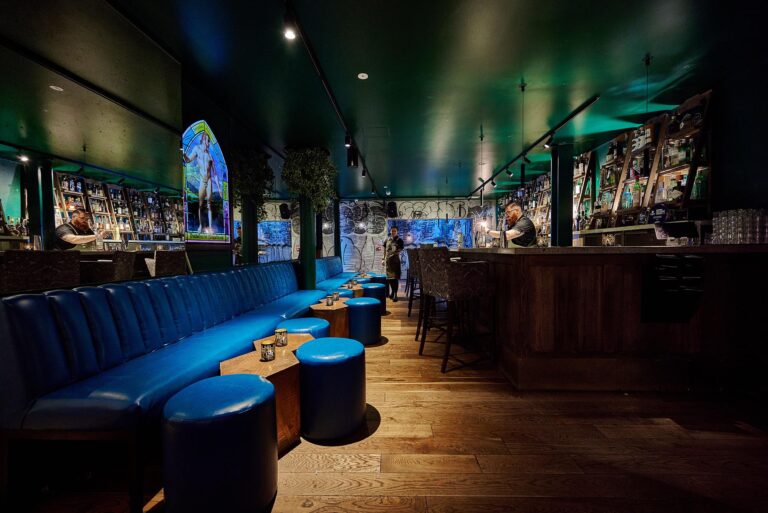 Set beneath inventive restaurant, Frog by Adam Handling, you’ll find Adam’s other half – Eve. Beautifully decked out with leafy alcoves and stained glass panels, it’s a suave space that serves mind-bending concoctions like the frozen cube of Black Russian… onto which you’ll pour a White Russian to allow the flavours to gradually shift. 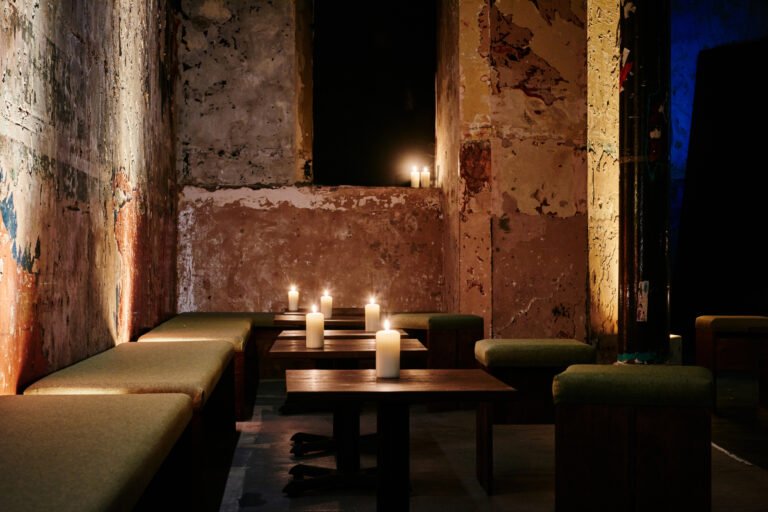 From the minds behind Notting Hill’s acclaimed Orasay and Frank’s in Peckham comes Below Stone Nest, a “beautiful, old fashioned dive bar” underneath a Grade-2 listed chapel in Covent Garden. Not only is the space a serious looker (crumbling brickwork, cast iron pillars and white church candles on every table), but the drinks are decent too. You can choose from a list of classic cocktails, as well as a highly curated list of wine and beer. And all whilst listening to an ‘ever-evolving’ soundtrack of music (some live) curated by music man, Tic Zogson. Tick, Tick….Tic. 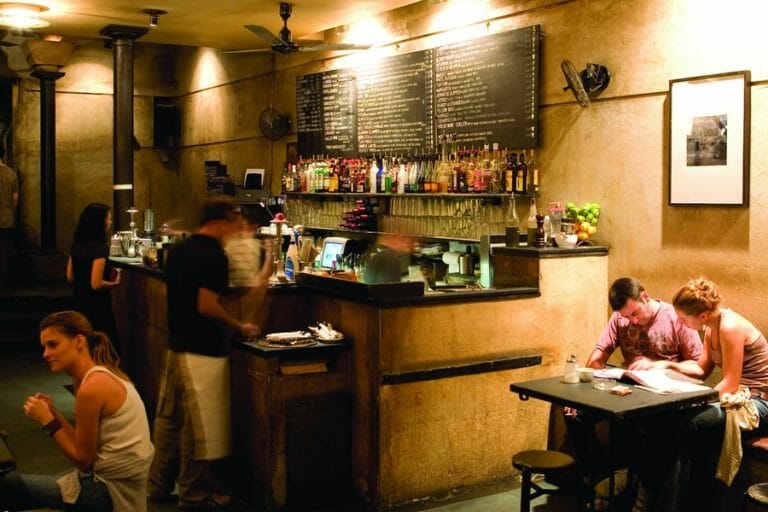 Freud’s decor is of a style that can only be described as… non-existent. But it’s precisely this lack of pretension that makes it one of the best kept secrets in the city. Freud’s has bare concrete walls covered in rotating artworks, and pint glasses filled with cheap & delicious cocktails – and you’ll need to talk very loudly to overcome the charged, giddy atmosphere. Precisely nothing about it has even a veneer of artifice, and precisely everything about it is fantastic. 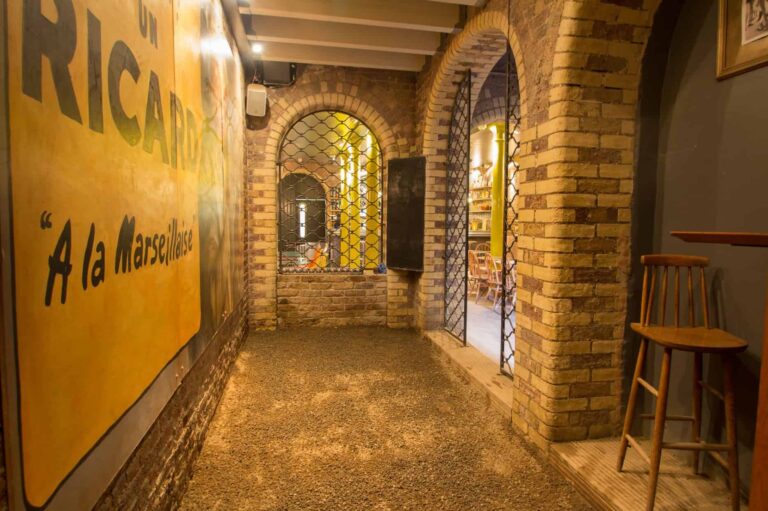 A basement cocktail bar with a simple menu of traditional Provençal snacks and a sizeable array of the region’s prime anise-flavoured apéritif, pastis. They also have a gravelled indoor pétanque court, where the goal is to throw hollow metal balls as close as possible to a small wooden ball. Simple. Until you’ve tried the pastis, that is. 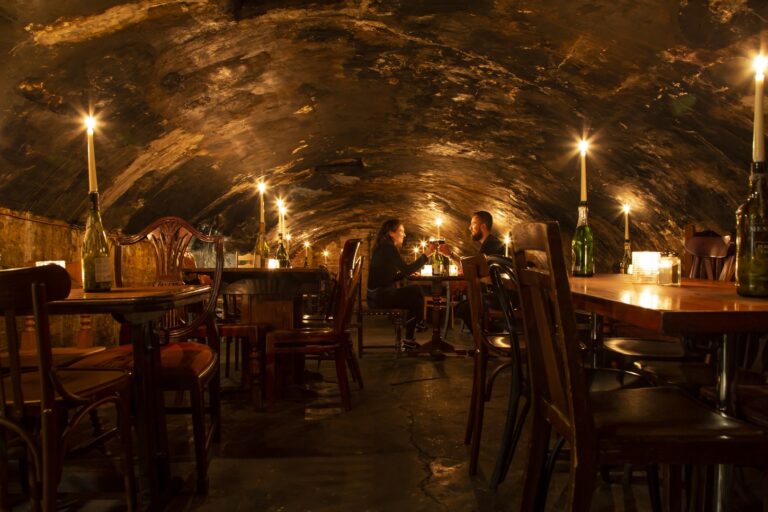 A crepuscular, subterranean, semi-circular cave carved from bedrock, and lit by candle light (and now a couple of festive strings of fairylights), Gordon’s is the sort of place that you can escape underground and tuck yourself away in a corner to sample an award-winning wine list of unsuspectingly modern drops from both the classic regions of France to South America and beyond… and some of Gordon’s 17 cheeses, evening tapas or Sunday roasts. 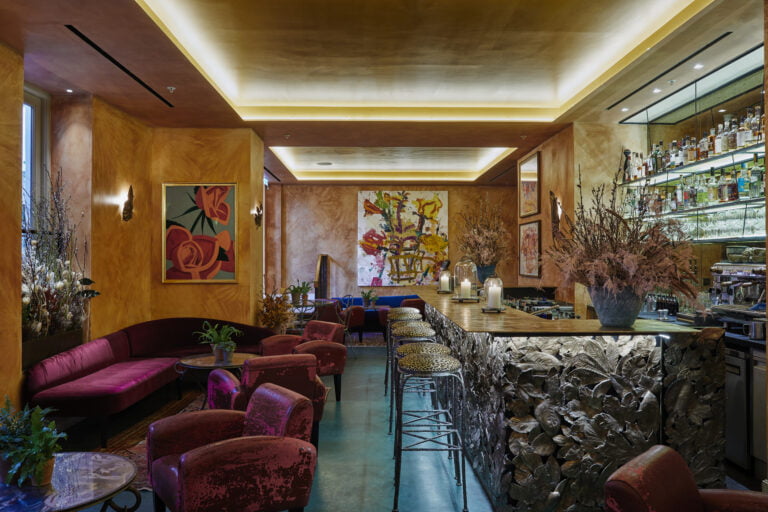 Wander through the serene courtyard at Petersham Nurseries Covent Garden, and you’ll come to the quietly secluded cocktail bar they keep there – La Goccia Bar. Inside, it’s awash with natural flourishes, from the florally inspired paintings on the walls, to the actual flowers dotted about in various vases. Oh, and the bar? It’s made from real leaves (collected in Italy) cast into bronze. And just to complete the picture, the cocktails are all botanically inspired, too. 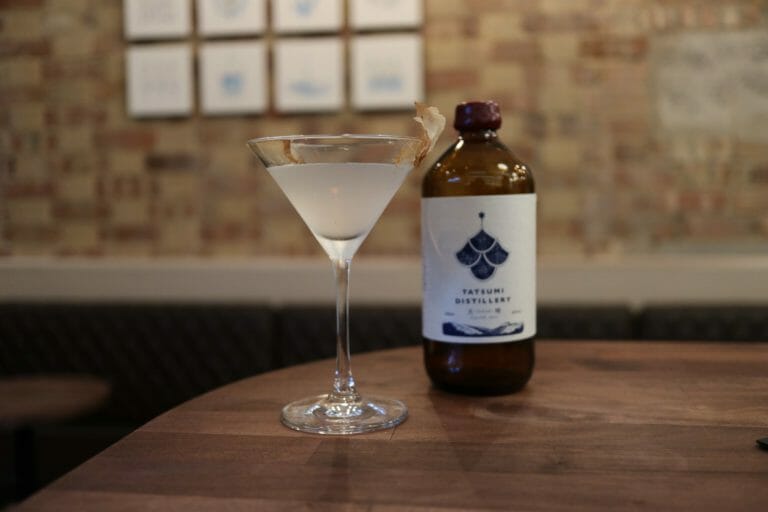 A relaxed, minimalist sake bar with an impressive roster of rice wine organised by flavour profile on the menu. If you’re not a seasoned sake drinker, you can kick off with a cocktail – and if you find something you like, you can take it home from the bottle-shop. Plus, there’s some mouthwatering Japanese bar bites on offer, including sake-battered chicken karaage.

The American Bar At The Savoy 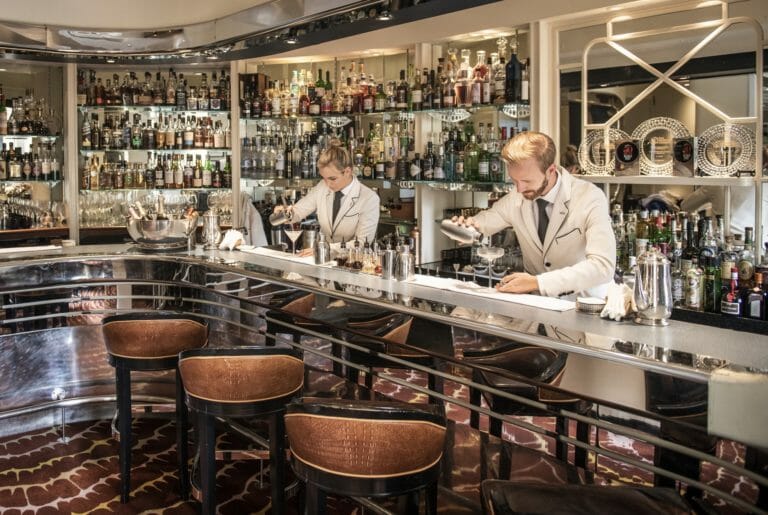 If you’re after a classic cocktail, The American Bar at The Savoy is probably the place that invented it. We’re not exaggerating. Legendary bartender Harry Craddock’s classic cocktails (most of which feature in “The Savoy Cocktail Book” that he wrote during his spell as head barman throughout the 1930s) are still served there, with the nightly musical backdrop provided by a tuxedo’ed crooner tinkling on the ivories. 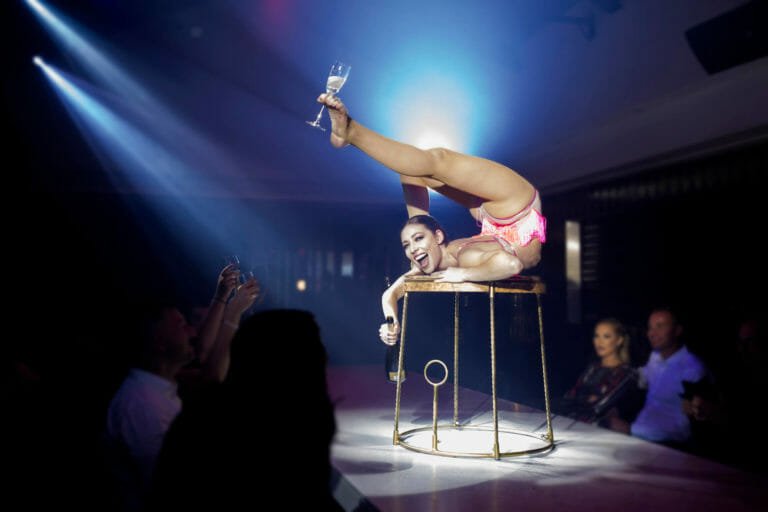 Circus is technically a restaurant, but it’s not the food that you come here for (however good it is). You come here for the fire-eaters, acrobats, trapeze artists, and ballet dancers who will gracefully weave their way between, over, and on top of the tables. And you can watch them just as easily sipping on a Willy Wonka’s Secret (with chocolate, whisky and blowtorched marshmallow). 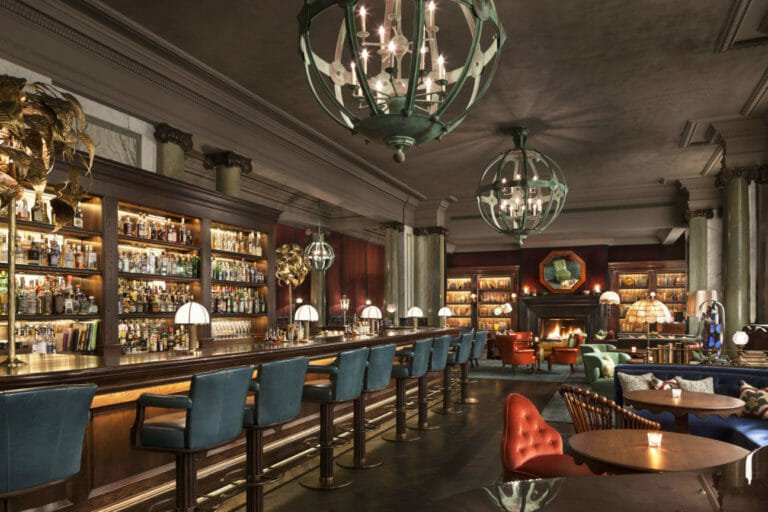 This drawing room-meets-gentlemen’s club style cocktail lounge displays a collection of Gerald Scarfe’s satirical paintings, alongside over 1,000 antique books. A short-but-sweet menu of just 16 cocktails includes a number from Scarfe himself, and is backed up by a selection of over 200 single malt whiskies, over 60 gins, and a live jazz band most evenings from 8pm (9pm Thurs-Sat). 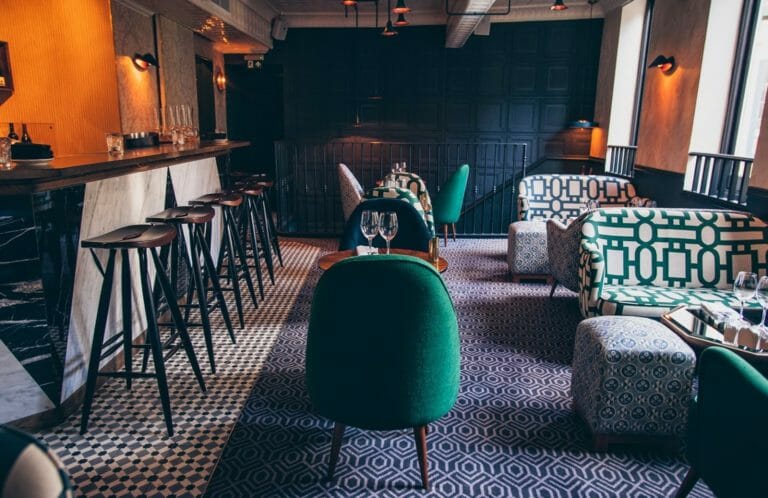 Strangely for a bar named after “supernatural” wines…

What they do serve, however, is a collection of carefully selected Old World wines by the glass and bottle, including a succinct selection of port and madeira wines, all of which you can enjoy alongside cheese, charcuterie and small plates like scallop with Jerusalem artichoke. You can even order a glass of ‘mystery wine’, which – if you can somehow identify it – will win you a bottle.

Partial to a tipple? Peruse all our recommendations of great bars in London