As with everything featured within The Nudge hit lists, this small guide to the best London cocktail bars is nothing more than a humble collection of our favourites.

It is, however, a collection of favourites which – by happy coincidence – doubles up as a more definitive and trustworthy list of the best London cocktail bars than you’re likely to find anywhere else.

None of these factors were given our direct consideration at any point at all. However they were all there – bubbling uncontrollably beneath the surface – as we diligently, and instantly, reacted to the command,

by producing the following: Artesian: In The Nudge’s Best London Cocktail Bars Hitlist. Also, on a side note, crowned as The World’s Best Bar by Drinks International three years running. Clarified strawberry milkshake, wild rose vermouth and croissant syrup are whipped into cocktails that are scientifically designed to be delicious in their underground cocktail lab. And it looks good too. Brought to you by two of the world’s finest mixologists, Monica Berg and Alex Kratena (both of whom are regulars on the World’s 50 Best Bars list), Tayer + Elementary is a chef’s table-style cocktail lab – serving up a core menu of impeccably designed cocktails like the Bergamot Margarita and Rhubarb Root Negroni, accompanied by seasonal specials like the Sakura Gimlet and Coconut Whey Sour.

Like this? Try… Untitled, another industrially styled cocktail bar with scientific mixology at its heart.
Details: 152 Old Street, London, EC1V 9BW | Walk-in only
– A shimmering silver-laced vault hidden round the back of the Connaught Hotel, the bar here has just been crowned the best bar in the world – by the World’s 50 Best Bars list. The reasons for which will become abundantly clear upon taking a secluded booth, catching the eye of the smartly dressed barkeeps, and watching as the bespoke martini trolley is rolled over to you, with its customisable array of tinctures, garnishes and spirits…

Like this? Try… The Library Bar at The Ned, where there’s also a martini trolley stacked with vintage spirits.
Details: Connaught Hotel, Carlos Place, W1K 2AL | Walk-in only
– Peckham’s home to many fine drinks institutions: there’s Frank’s, up on the roof of a carpark; Peckham Cellars, specialising in natural wine; and Kanpai, London’s one and only sake brewery. But for cocktails it has to be Funkidory, a pea green retro outfit that nails both the classics and their own signature creations like the Rye Lane and the Frozé Paloma. A Belle Epoque-era cocktail tavern; where drinks arrive enveloped in smoke and served in an array of curious and unusual vessels. The cocktail menu hops through time, filled with excerpts from various historical texts as well as the drinks themselves – including one aged in a parmigiano reggiano barrel. And as the lovechild of two former Nightjar and Connaught barkeeps, it behoves every inch its pedigree. A cocktail bar in an old police station with booths in the old cells, and miniature lock-ups where you can keep your own favourite bottles for the next time you swing by. The place is a paean to booze: on the ground floor you’ll find a bottle shop stocked with over 1,000 different spirits; upstairs is a festoon-lit rooftop bar; and they’ve somehow found space to squeeze in a cocktail workshop and an intimate, 50-seater cinema, too. An illicit, soul-soundtracked, subterranean drinking den housed in the old stockroom of a suit tailor’s. The drinks here – creatively combining classic methods with new ingredients – change every six months or so, meaning that there’s plenty reason to keep coming back again and again… and again. A neighbourhood bar like this really is one of life’s little mercies. Set up by former Scout bar manager Alan Sherwood (with a little help from the Venning brothers at Three Sheets), it’s a friendly, totally unpretentious, but unequivocally cool spot in Crouch End, serving exceptional cocktails made with creative ingredients. Try the Old Fashioned with caramelised white chocolate, or the crystal clear martini made with avocado leaf cordial…

Like this? Try… Three Sheets, their Dalston cousin where the menu has only three sections, which in turn have three drinks.
Details: 20 Broadway Parade, N8 9DE | Book here
– 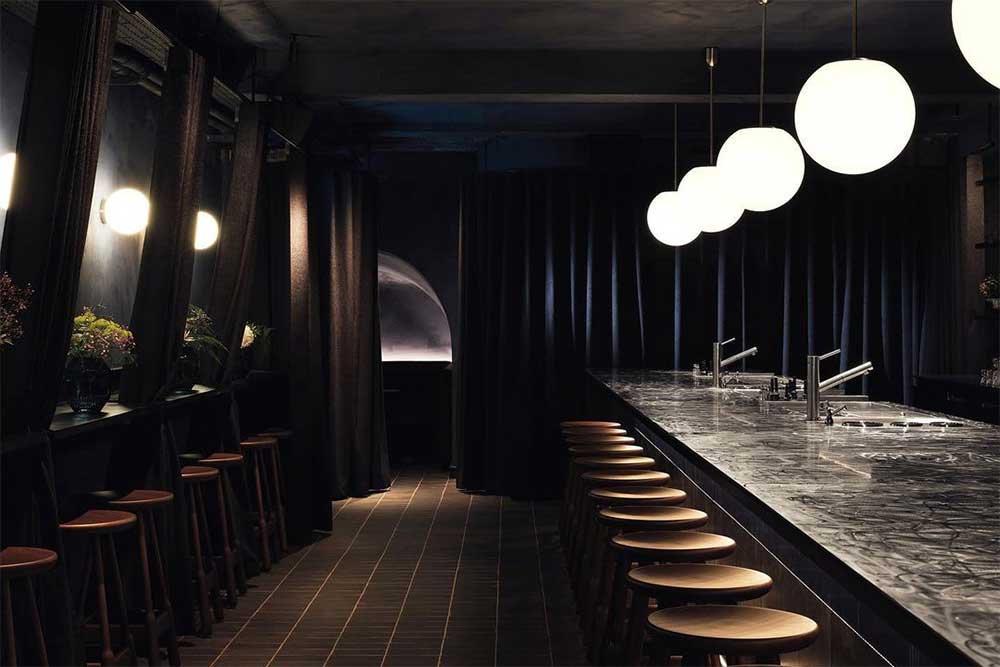 The cocktails at SOMA aren’t particularly lavishly served, or kookily themed. But they are unlike anything you’re likely to have had before. Run by the folks behind neighbouring Kricket, it’s a moody basement bar where the drinks are all infused with Indian flavours. There’s the Jaggery, an Old Fashioned whose sugar syrup’s been swapped out for sweet jaggery cane and toasted coconut; the Leaf, a gimlet elevated with kaffir and curry leaves; and Chai, a rum sour with clarified chai and ginger. Oh, and the 3am closing time is worth knowing about, too. 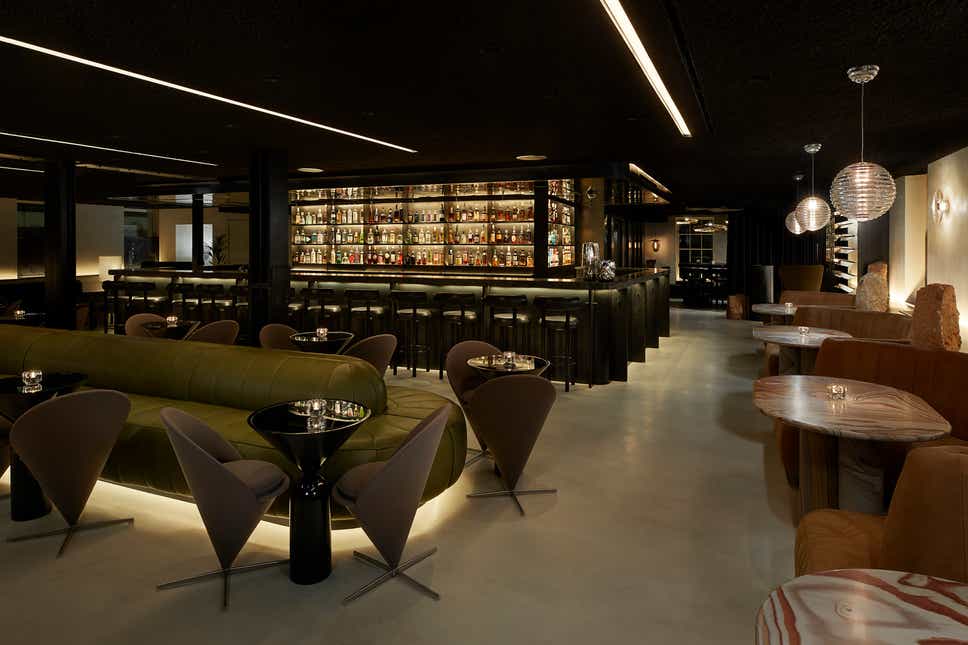 Perched on the third floor of the elegant Pan Pacific Hotel, Silverleaf comes to you from Milroy’s founder Martyn “Simo” Simpson, his old colleague Chris Tanner, and Callooh Callay’s Liam Broom. Unsurprisingly, they know how to do cocktails. Here, the innovative menu uses rune-like symbols to define the flavour profile of each drink, so you won’t really know what it’s going to look like, or what ingredients it’ll have, until it arrives at your sleek, martini glass-shaped table…

Like this? Try… Disrepute in Soho, where the cocktail menu is a list of short stories, not ingredients.
Details: 80 Houndsditch, EC3A 7AB | Book here
– A bustling 1970s-meets-Victorian bar, inside which lives the actual, legitimate speakeasy wardrobe to Narnia. And by ‘Narnia’, we mean Callooh Callay’s dimly-lit, quirky booze-slinging, hideaway lounge. A Bethnal Green bar cramped between newsagents, mini-cab offices and strip clubs, with taxidermy on the walls and an illuminated icebox on the bar full of sliced tropical fruits. Order the Champs Elysées with Cognac and green Chartreuse, and soak up the hip hop soundtrack. A small, intimate room of 1950s Italian furnishings and top-tier cocktails from drinks virtuoso Tony Conigliaro. And yes, this bar has no name: perfect for when you don’t know where to go. READ MORE Quite literally the birthplace of some of the world’s most famous cocktails. Legendary bartender Harry Craddock compiled his creations (Corpse Reviver #2, White Lady, etc.) into the Savoy’s 1930 cocktail book here, alongside a number of other perfected classics – and they make them with just as much panache almost a century later.

Like this? Try… Dukes, another classic hotel bar with significant heritage, as the spot where James Bond – and his martini – were born.
Details: The Savoy, Strand, WC2R 0EZ | Walk-ins only
–

Fancy some quirkier options? Check out the Nudge’s Guide to the most unusual London bars.