So let’s have a drum roll… and a trumpet solo… and a little bass… for we are about to announce the best bars in the capital with regular live music nights. Not necessarily dedicated gig venues, that is, but somewhere atmospheric where you can enjoy a smooth tipple with a mood music garnish. Nightjar is hidden away behind a curtain at the bottom of a staircase behind a very dark, unmarked door facing Old Street roundabout. It’s the kind of spot you’d never notice unless you were specifically looking for a brick-walled jazz den serving some of the city’s most unusual cocktails. Which, as of now, you are.

When to catch it: Every night from 9pm, plus midnight sets on Fri/Sat | Cover charge? £4-10 depending on the day | Book a table & see who’s playing here
– You don’t call your bar Louche without providing a little raucous live entertainment. This three storey townhouse is a love letter to old Soho, with two stages occupied regularly by live bands, singers, jazz sets, burlesque artists, cabaret acts and more. And the cocktails are just as brilliant.

When to catch it: There’s jazz every Wednesday night, but you can see what else is on here
–

Filling the space where Kansas Smitty’s used to be, The Brink is the new jazz and funk bar that’s nesting beneath Off Broadway. Which means you can expect the same intimate, dive-bar-style space; the same crack team of bartenders who can make any cocktail; and an all new line-up of musicians to go and enjoy. This place is a bit like a classier version of the raucous servants quarters below deck in Titanic. An intimate, bi-level space with candlelit cabaret tables and an art deco-styled bar, it’s the perfect place to head whenever you fancy port cocktails accompanied by a hand-pumped harmonium. Which is always.

When to catch it: Most nights, check programme here | Cover charge? Individually ticketed, free on Fridays Not all underground wine and charcuterie bars housed in a former Victorian public convenience beneath Clapham Common also host regular performances of folk music and 60s pop. But this one does. Stone walls, lofty ceilings and a good rapport with angels. There are quite a few reasons 17th Century churches make excellent live music venues, especially when that live music comes alongside a whole load of booze and regularly-rotating food from some of London’s hottest street food brands. Expect everything from 70s folk magic to gospel,  as well as DJs every Friday night.

When to catch it: every Thursday-Saturday | Cover charge: depends | See what’s on and book here

Just in case having a live jazz band wasn’t enough of ‘a thing’, this restaurant has also plumped for a menu that occasionally features the likes of white shark fillet, kangaroo and crocodile. Also, the chef’s a DJ. And you only have to pay what you want for the whole meal. Hidden away underneath Stone Nest (the Grade II-listed chapel turned live music venue in Covent Garden) is a cocktail bar called, well, Below Stone Nest…It comes to us from Frank and Jackson Boxer, the brothers behind Orasay, Frank’s Cafe and Brunswick House. In other words, they what they’re doing, this time taking on a small, subterranean dive bar where, as well as drinking a few cocktails or a glass of natural wine, you can listen to live music, curated by none other than Tic Zogson. He represents bands like The XX and FKA Twigs and will be programming all sorts of live performances, as well as DJs and looking after the bar’s on-going playlist.

When to catch it: Wed-Sat | Cover charge? varies If you can resist the leafy terrace out front, the quirky antique-filled dining room, and the wafts of Modern British cooking emanating from the kitchen, you’ll be rewarded down in the cellars of Brunswick House, where, over the next few months, different wine, beer and cider producers will be hosting pop ups with live jazz from Mark Kavuma and The Banger Factory every Tuesday.

When to catch it: Tuesdays from 5th October | Cover charge? No | Walk-ins only
– Oriole’s cocktails are plucked from all over the world – and so is their music. On any given night you can expect West African blues or Cuban son to be floating through the bar, as well as the occasional snake-wielding burlesque artist. And as the second bar from the Nightjar folks, the drinks aren’t too shabby either. Gerald Scarfe is best known for his witty and satirical cartoons, and least known for the extinct genus of monofenestratan pterosaur, Cuspicephalus scarfi, named in his honour. Sadly it’s only the former that decorate the walls of the suave, gentleman’s club-like bar dedicated to him in Holborn’s Rosewood Hotel – a disappointment you’ll soon get over thanks to the live, 50s-era jazz.

When to catch it: Friday – Sunday nights | Cover charge? No | See who’s playing, and book a table, here
– The Piano: a 160 year-old Collard & Collard Grand, left in the capable hands of a rotating line-up of musicians playing everything from Nina Simone to Rihanna.

The Bar: a candlelit den with killer cocktails, bar snacks and plush leather banquettes – not that you’ll be needing them when you’re swaying round the piano singing along to ‘Feeling Good’.

When to catch it: Kensington: Wed to Sun evenings, Smithfield Wed (ticketed), Fri & Sat | Cover charge? No, but some events are ticketed – see what’s on, and book, here
– Five years after opening on Hackney Road, the brilliant Spanish-Moorish tapas spot Morito has opened the door to its cellar space. Aptly named Downstairs at Morito, it’s a more casual den with a late-night bar vibe, serving cocktails and a hand-picked banquet of those great dishes you can get upstairs. And on Tuesdays, they bus in some local talent to serenade you with live music… 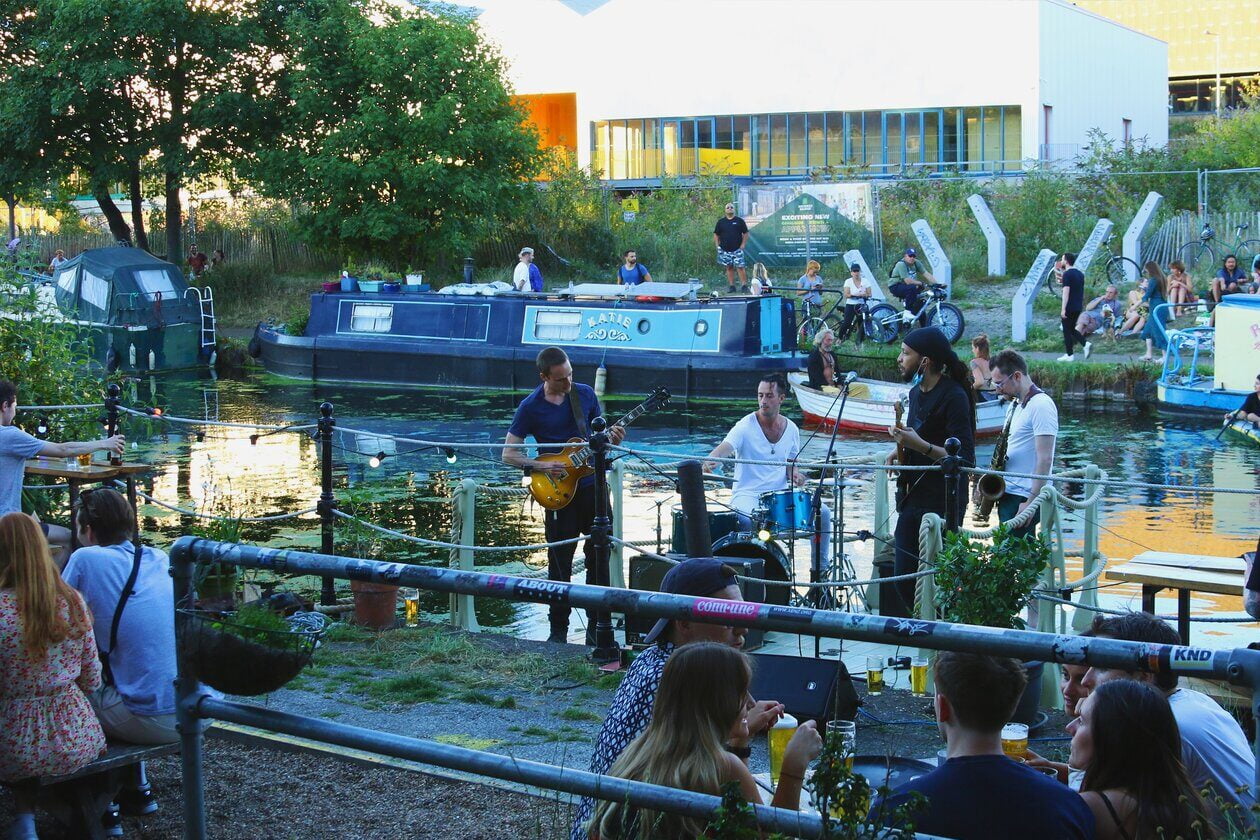 Grow started out as a hub of artists’ studios nestled inside an old sausage factory. And true to its name, it’s now grown into a canalside bar and pop up kitchen, too. Every Thursday night, the house jazz band pitches up by the waterside and plays a couple of sets – and any musicians in the audience are heartily encouraged to get up and join in (especially tempting after a cocktail or two). …as you’ll immediately notice upon entering, because they’ll be using it to crank out arrangements of classic pop ‘choons’ for the bopping crowd’s pleasure. Get in the thick of it and shout out requests, or sit back with a cocktail and bar bites and let the mellifluous strains of Teenage Dirtbag wash over you. Ronnie Scott’s jazz club is a classic for a reason. And that reason is the no talking rule, saving first dates from awkward small talk since 1959.

When to catch it: Nightly, but often sells out – book ahead here | Cover charge? Varies, check programme for details
– Remember the last time you stumbled across an almost-hidden bar underneath Leicester Square with classic cocktails, three course dinners with bottomless prosecco and a six-piece band exclusively playing pop song requests from the crowd? This is exactly like that, except with musically-synchronised light up tables.

The Vault at Milroy’s | Soho

Hearing the jazzy strains of live music emanating from behind a bookcase would, in most situations, be a cause for concern. In fact, the only time it isn’t, is when you find yourself browsing the shelves of Soho whisky emporium Milroy’s, and are reminded of the fact that their subterranean, uber-romantic bar (hidden behind some shelving at the back of the shop) has now turned over Monday evenings to live music nights, where you can kick back with a whisky cocktail and feel very happy that your marbles are intact.

When to catch it: Monday evenings | Cover charge? No | Book a table here
– When to catch it: Most evenings | Cover charge? No | Book a table here
–

By day, Cable Café roasts its own coffee, bakes its own cakes, and generally spoils everyone with its ineffable neighbourhood charm. By night, it cranks out the cocktails, accompanied by free live jazz of a Tuesday evening.

When to catch it: Tuesday nights | Cover charge? No
– An impossibly romantic Parisian style bar, with exposed brick walls, vintage lighting and live piano from the genre-spanning Maurice Horhut. Plus, the drinks are among the best in the city, winning Coupette a smart 23rd place in the World’s 50 Best Bars.

The Troubadour has been a stalwart of the London gig scene since the fifties – but it’s also a singularly lovely place to enjoy a Sunday roast or a quiet pint with some live jazz and acoustic bubbling away in the background.

When to catch it: Most nights, check programme and book tickets HERE | Cover charge? Individually ticketed

Want more than bar bites with those beats? Check out our guide to the best London restaurants with live music