The Best Restaurants In Shoreditch

Much like the area’s patchwork of architecture, which flits from glass skyscraper to crumbling warehouse, the restaurants in Shoreditch are a real hodge-podge of styles.

You see, it’s the only part of London where you can find a Thai restaurant inspired by late-night roadside BBQs neighbouring a Michelin-starred dining room dedicated to turbot. Or an extravagant, kitschy pizzeria plucked from 1970s Capri down the road from a glorious Modern British spot hidden away in an old school bike shed.

Here you’ll find The Nudge’s pick of the most delicious and unusual restaurants in Shoreditch. 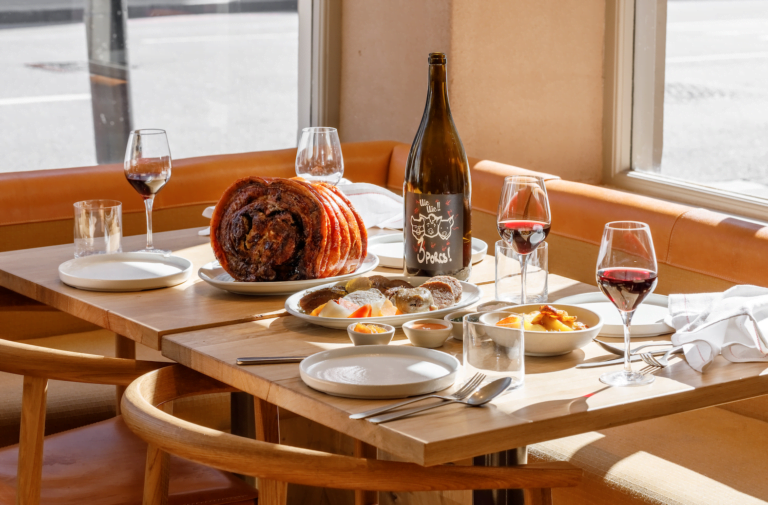 As for the food, the fresh pasta dishes are perfectly al dente and dangerously moreish. Meanwhile, whole-animal butchery comes served in the form of the restaurant’s signature mortadella and pig head fritti. 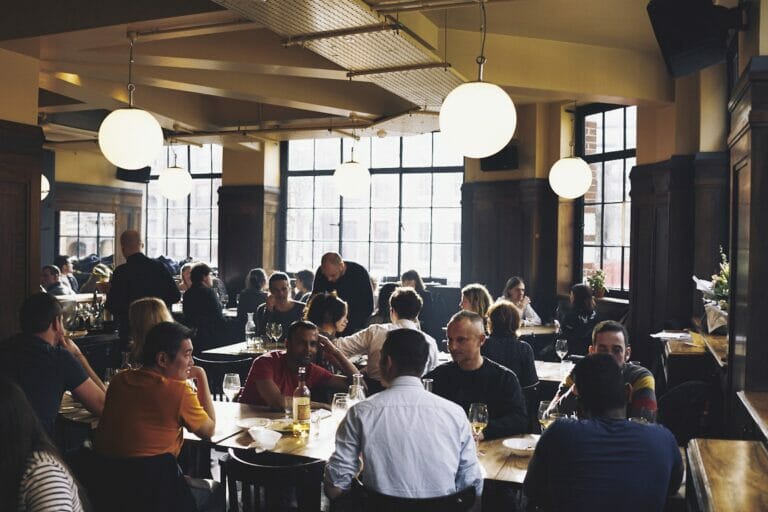 This is the kind of brat you do want to visit. Scoring a Michelin star just six months after opening, it’s the first solo spot from another former Kitty Fisher’s chef, Tomos Parry. Named as a tribute to what Parry considers “the king of the sea”, turbot, he uses a surprising blend of his Welsh heritage with Basque cooking traditions to create a hyper-seasonal menu featuring char-flecked, texturally interesting, produce-focused dishes, served alongside a thoughtfully curated wine list. 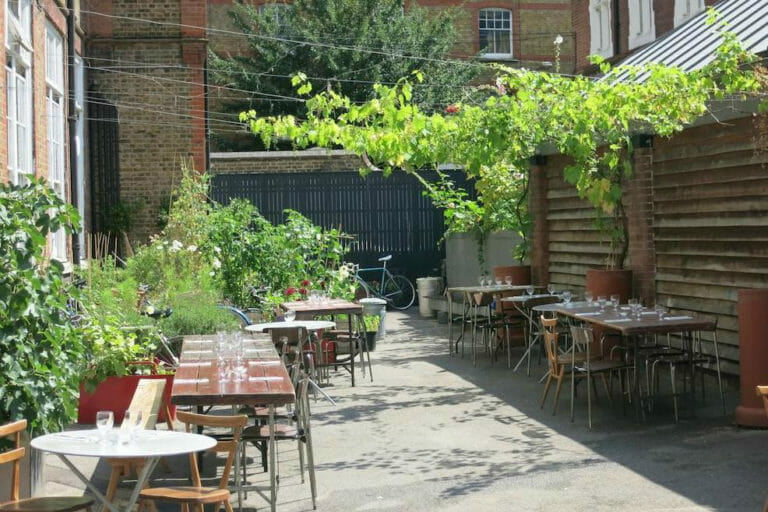 Getting a table at Rochelle Canteen first requires you to find a gate with a doorbell in an old primary school playground – but it’s more than worth the mission to track it down. It’s a joint venture from laurelled chefs Margot Henderson and Melanie Arnold, serving produce-led dishes like steamed mussels with chips; chard, chickpea and tomato stew; and rhubarb panna cotta – all of which can be enjoyed al fresco… or, as it’s also known, behind the school bike shed. 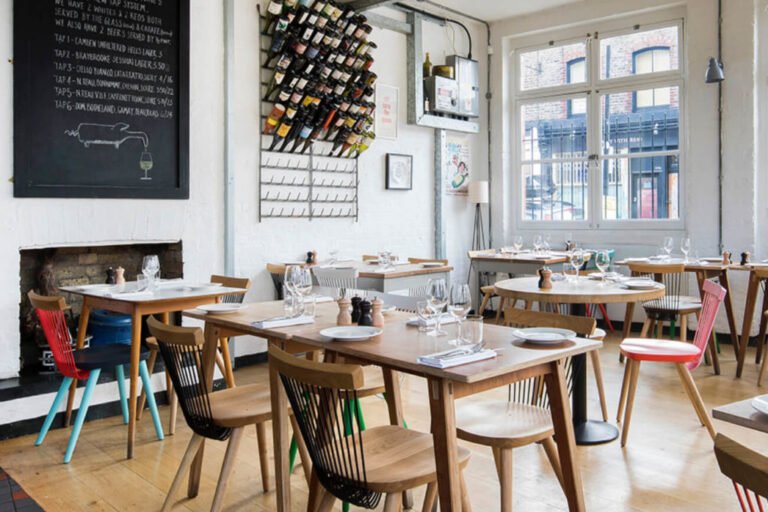 A thoroughly laid-back, neighbourhood corner spot housed in a former workshop space on Columbia Road. Brawn is the perfect retreat from the business of the flower market on Sundays (go for the roast), or any time for that matter – the food is unfussy, unpretentious and showstoppingly executed. Changing regularly, the menu is produce and season-led, with a smattering of small plates to pick at as you choose, and a rather lovely wine list to accompany. 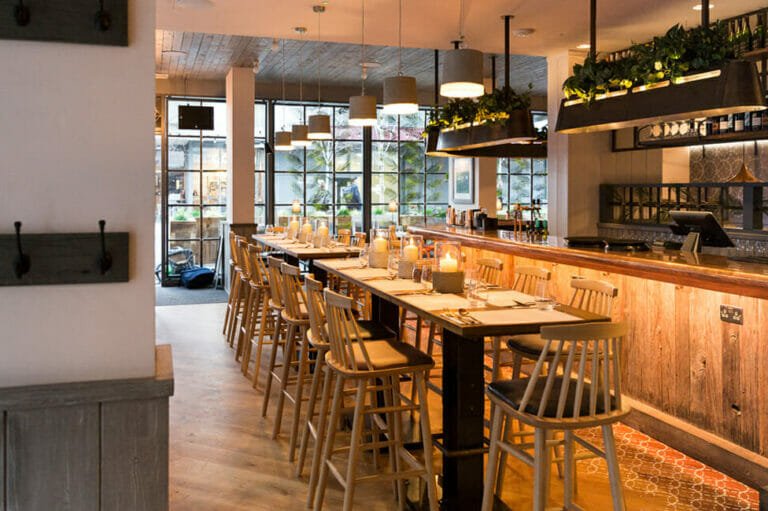 Lahpet is easily the best Burmese restaurant in London. And sure, there may not be a lot of competition. But Lahpet is ready to make up for our heretofore lack by presenting gorgeous dishes like split pea tofu fritters; dried shrimp dumplings; and pork and mustard green curry. And yes, while you should be prepared for pangs of momentary angst at not having discovered it sooner, this will be replaced immediately by feelings of deep, deep joy. 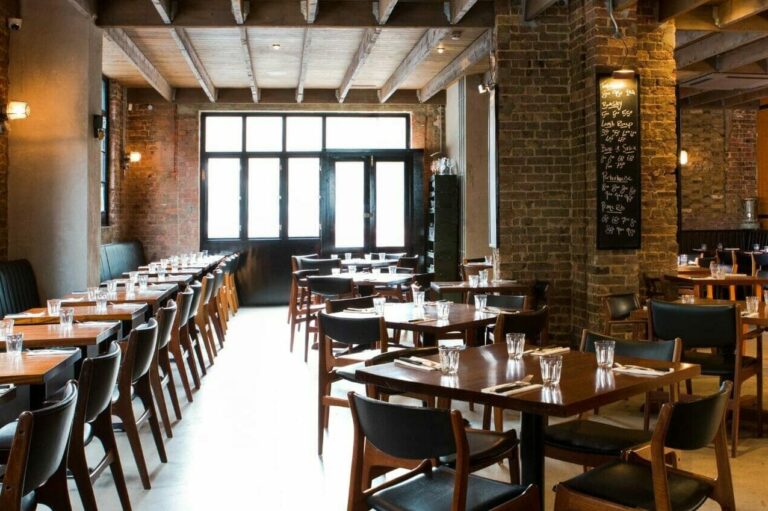 Home of the city’s best (and, coincidentally, most affordable) chops – Blacklock serves up quality cuts by the 100g, or you can build your own adventure with starters (pig’s head on toast), sides (10-hour ash roasted sweet potato) and mini cuts (£4 pork belly or lamb T-bone). All alongside cocktails, served tableside from a drinks trolley, for a fiver. 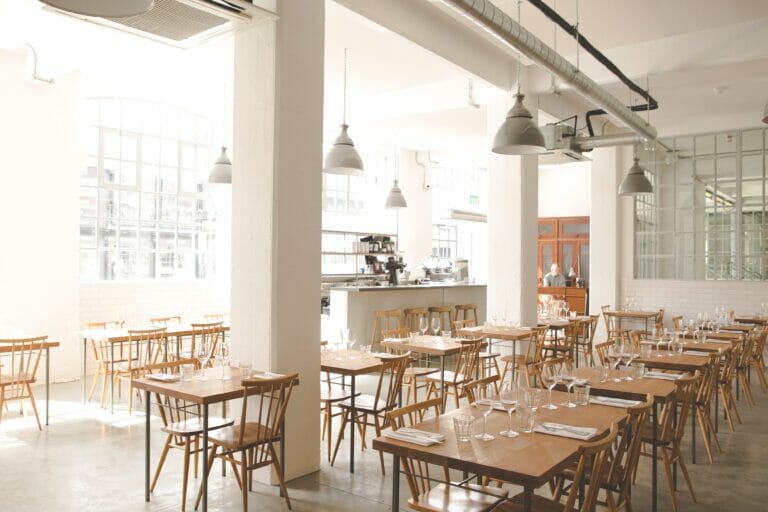 Lyle’s was met with near mass-hysteria when it opened back in 2014; partly because it was headed up by Young Turks founder James Lowe, and partly because a small part of the population were expecting a restaurant devoted to Golden Syrup. While the latter turned out to be misinformed, the wünderchef and his team are still plating up some of the most delicate and elegant modern European dishes in the city… 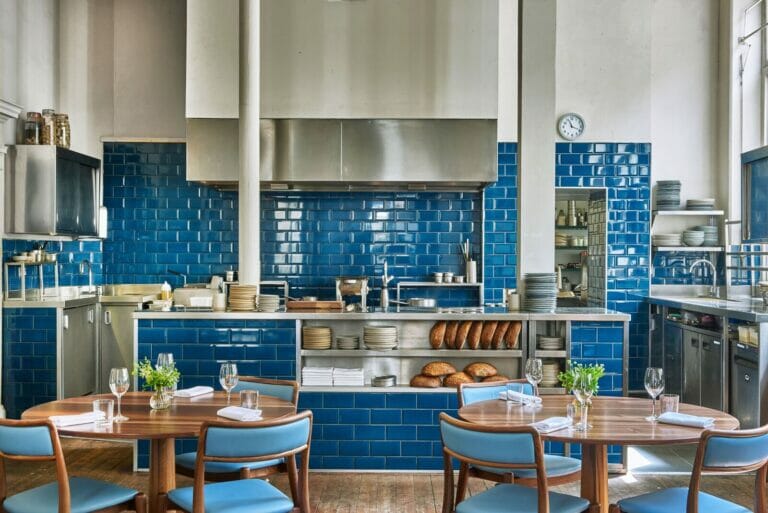 The Clove Club hasn’t got much going for it. If you discount the fact that it consistently ranks as one of the World’s 50 Best Restaurants, has held its Michelin star for years, and reached no. 2 in the list of the UK’s best restaurants, that is. Oh, and the fact that it also boasts a former Young Turks founder as its head chef. But apart from that, it’s just your run-of-the-mill, regularly evolving tasting menu restaurant housed in a striking, historic building. 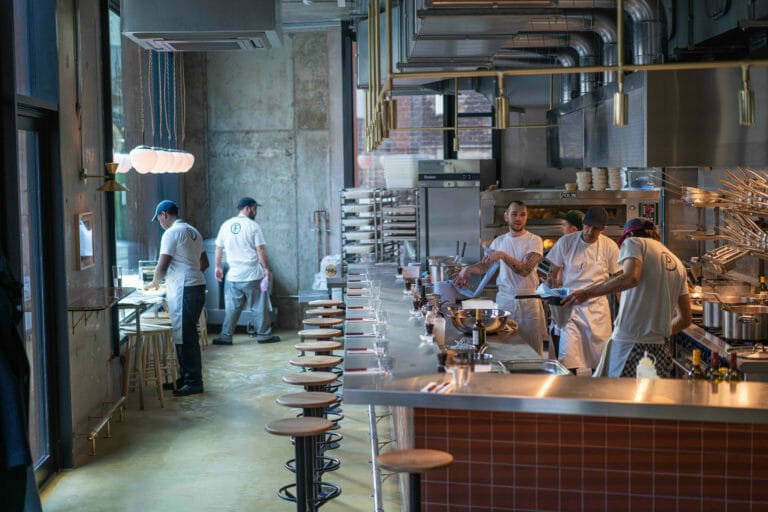 Thanks to Padella, London Bridge was home to the reigning champion of London’s fresh pasta restaurants. Until founders Jordan Frieda and chef Tim Siadatan opened a second branch in Shoreditch, that is. Unlike the original, there are a small number of bookings available each day, and walk-ins are easier to come by since the Shoreditch restaurant is a whole lot bigger – thanks in part to the breezy streetside dining terrace round the back. 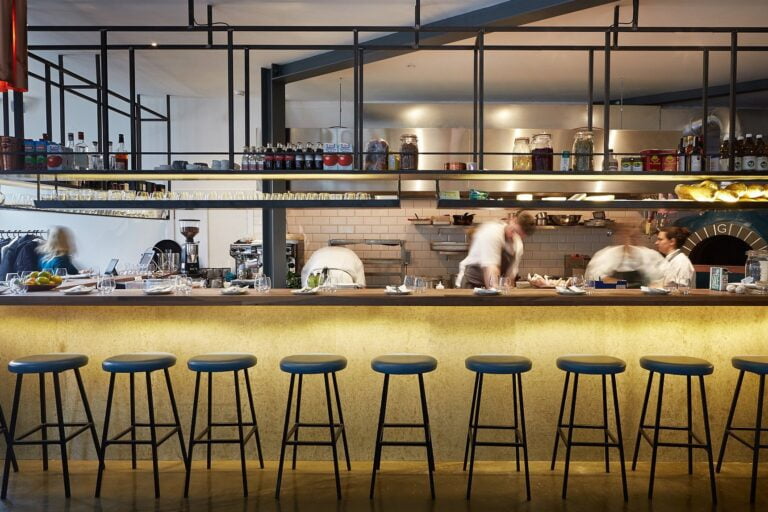 Tucked away from the hubbub of Great Eastern Street is Oklava, a Turkish restaurant with a contemporary edge, headed up by Selin Kiazim and Laura Christie. It’s named after the traditional rolling pin used to make breads, pastries and pide, all of which can be sampled alongside hot-off-the-grill meat and fish dishes, blousy-leafed salads and truly exceptional Cyprus potato chips. Complement your order with an option from the wine list that focuses on wines from Turkey.

For BAO’s sixth venue, they’ve decided to let their fluffy, steamed buns step out of the spotlight, making way for this – a Taiwanese noodle shop with a karaoke bar underneath it. It’s exactly as good as it sounds. The space looks just as pretty as BAO’s other venues, and the main dish – beef noodle soup – is rich, hearty and nourishing. Just leave room for cocktails. You’ll be glad you did. 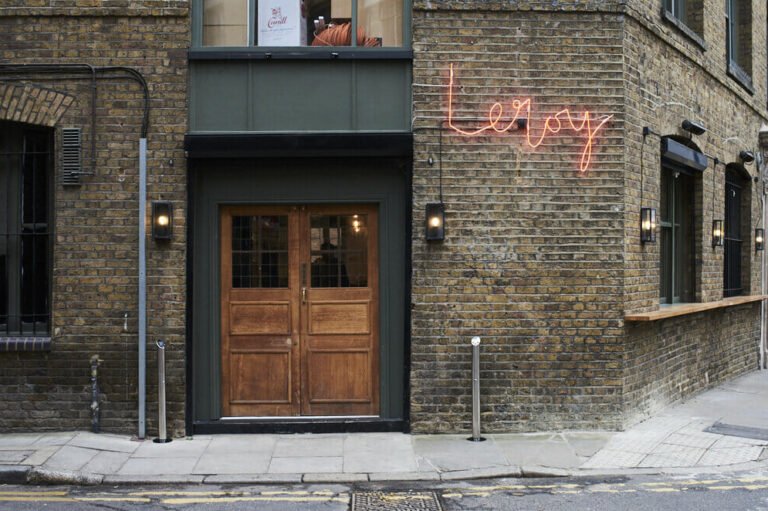 First, there was Ellory. Now, there’s Leroy; its remixed, Michelin-starred, second incarnation after upping sticks from London Fields to down sticks in Shoreditch instead. The menu’s been given a distinctly stronger Parisian slant here, like cheese and wine-drenched scallops and confit chicken skewers; all designed to share alongside a bottle of good wine.

Which ultimately means that you’ll Roley out of there. 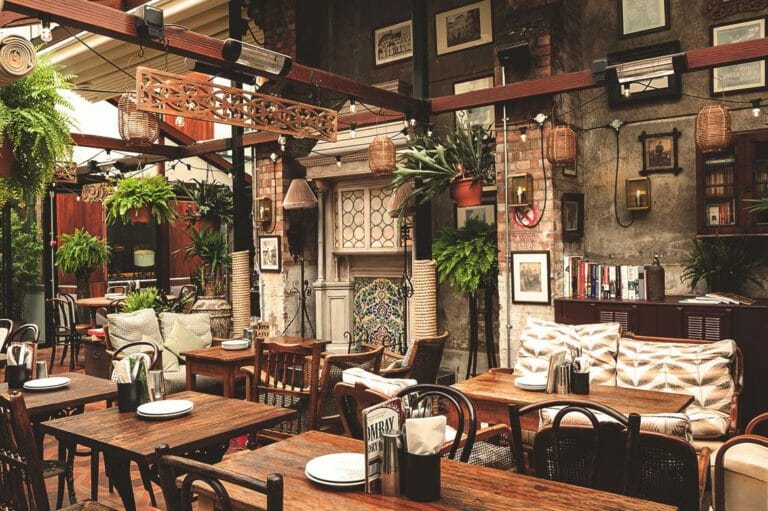 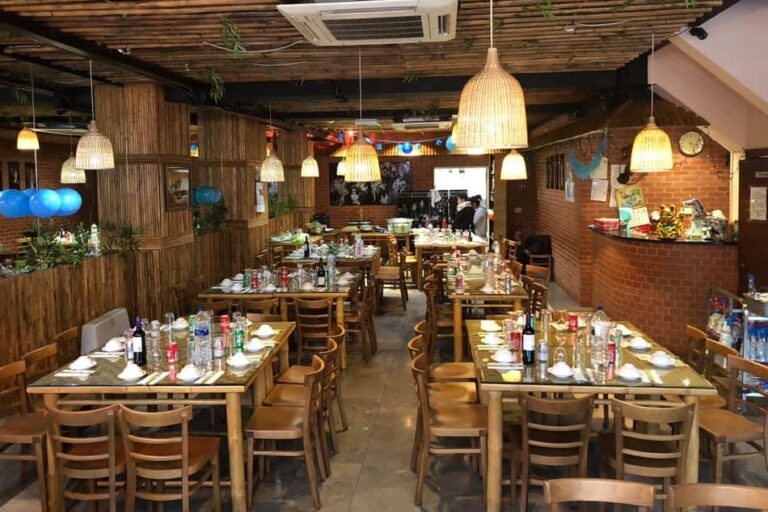 The Pho Mile is a lesser-known stretch of East London. Sitting shoulder to shoulder with other Vietnamese restaurants is Mien Tay, a family-run spot serving generous portions of spice-laced curries (served in clay pots) as well as more adventurous dishes including stir-fried frogs legs. It’s BYOB, with a small corkage fee, and is so popular you’ll also find it in Battersea, Fulham and Wood Green. 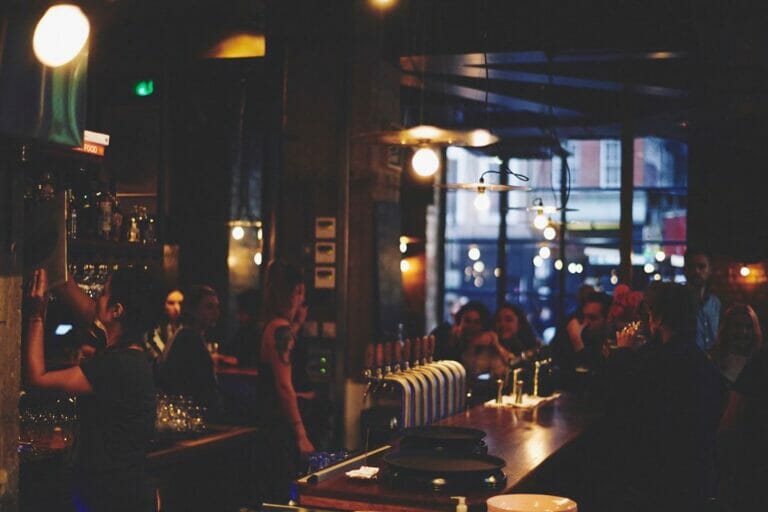 Smoking Goat’s Shoreditch restaurant has a decidedly grittier feel than the Soho original, styled after late-night Thai canteens. As such, the grub here riffs off aharn glam lao (‘drinking food’), and features dishes like smoked brisket with drunken noodles; barbecued pork and pork-fat skewers; and of course, a little smoked goat.

The Princess Of Shoreditch | £££ 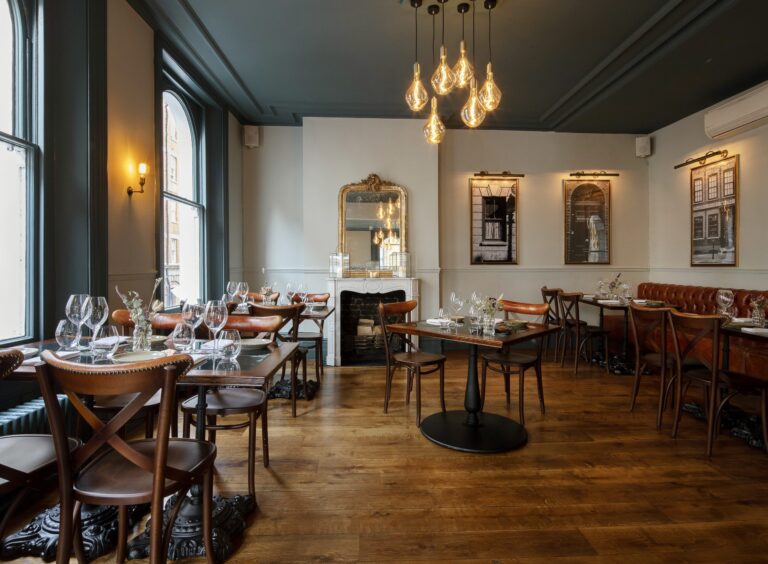 Thanks to the appointment of Head Chef Ruth Hansom, what was always a good pub has been elevated to the majestic. The space remains the same: two floors of old-meets-new. Dark woods are offset by amber-hued pendant lighting and red leather banquettes sit opposite dusty blue walls. However, Ruth – who at 26 has already worked at The Ritz, become the youngest person to win Young British Chef Of The Year, and starred on the Great British Menu – has given the food a total overhaul. Downstairs the dining is more relaxed – modern British pub classics, with attention-grabbing twists. Upstairs however is a little more refined. You can choose from either a five course or eight course tasting menu, full of seasonal British produce, but this time crafted into precious little plates that look almost too good to eat. 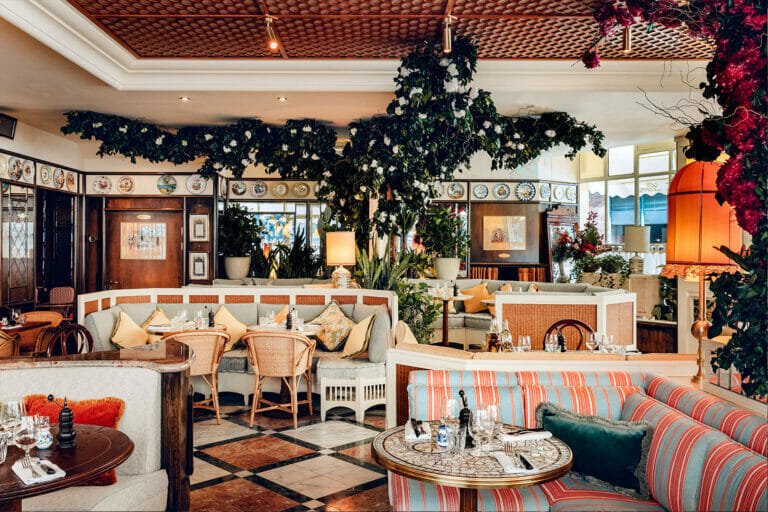 A temple to decadence: Gloria was the debut UK restaurant from the Parisian Big Mamma team, who have since repeated their unrivalled levels of extravagance with Circolo Popolare and Ave Mario. Packed to the rafters with old-school frills and kitschy decor, the restaurant is famed for its ten-layer lasagne, outrageous cocktails and giant lemon meringue pie. It’s one of the most entertaining restaurants you’ll have the pleasure of eating at in East London. 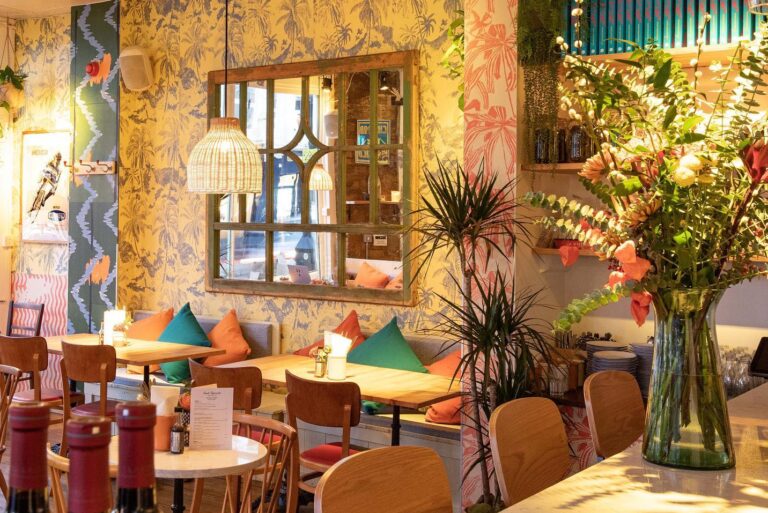 Edson and Natalie Diaz-Fuentes have reopened a restaurant in Shoreditch, where their colourful Mexican eatery was a smash hit before being forced to close prematurely due to landlord issues. After the success of their huge flagship down in London Bridge, they’re back with a sophomore on home turf where the vibe is colourful and eclectic, with an open kitchen firing out rounds of flavour-dense tacos, tostadas and quesadillas.

Making a night of it? Then you’ll need our list of the best bars in Shoreditch, too