The Best Restaurants in Victoria

Sometimes you’re in the mood for fine dining.

But sometimes, you’re in the mood for really excellent dining.

And if one of those moods happens to strike you when you’re in Victoria – fear not. Because we’ve tirelessly tracked down the greatest dining establishments in the neighbourhood, selflessly sampling every brunch, lunch and dinner for the sake of your tastebuds, and rigorously assessing each restaurant for its atmosphere, service, and of course, food.

Behold our pick of the best restaurants in Victoria…
– 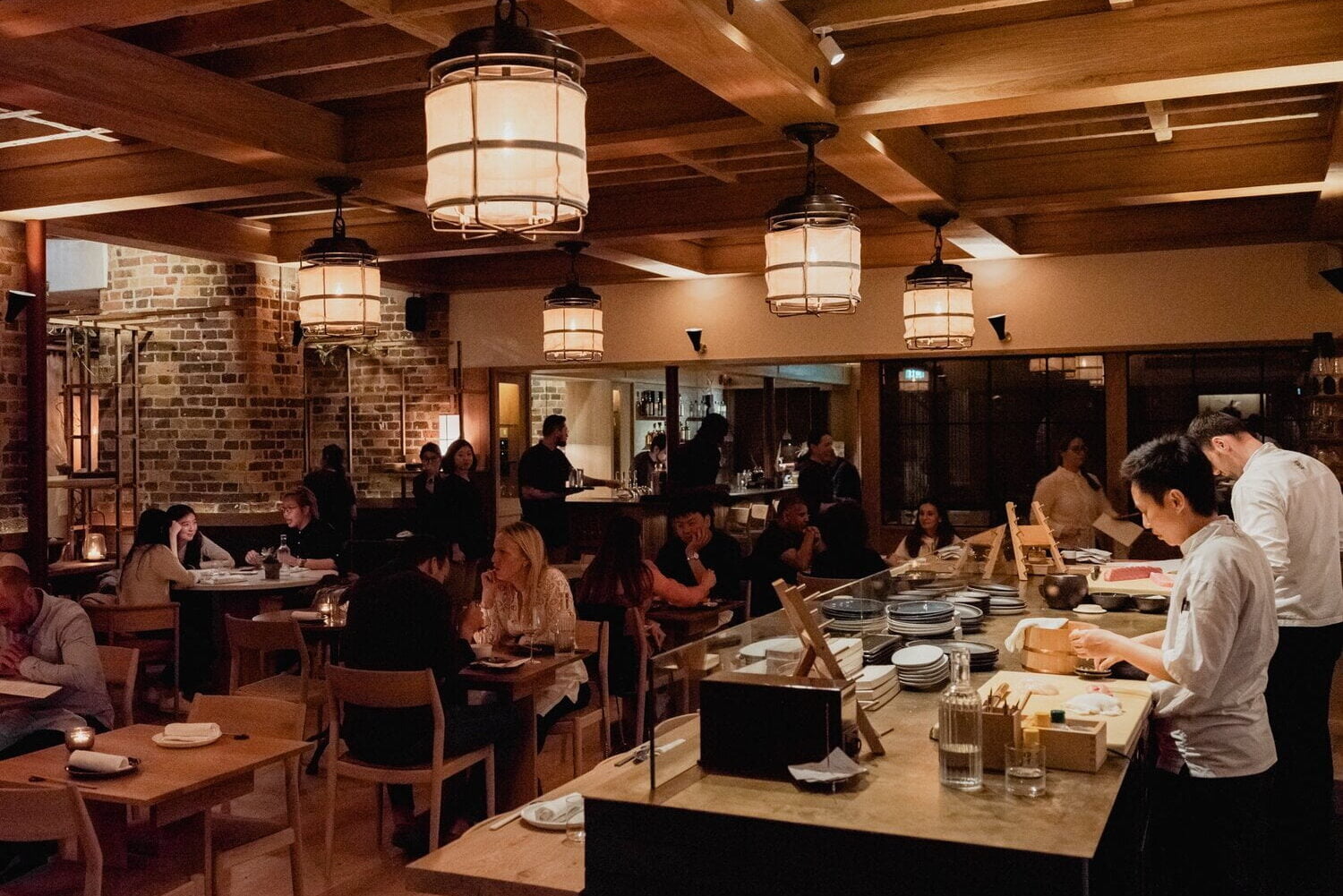 Technically in Belgravia rather than Victoria, but well worth hopping across the imaginary border. Pantechnicon is a five-storey temple to all things Nordic and Japanese, including shops filled with stylish, hard-to-find products; workshop spaces; a tiny sake bar; a Nordic rooftop restaurant and terrace; and a Japanese restaurant in the basement. It’s basically worth its own day trip.

The Other Naughty Piglet 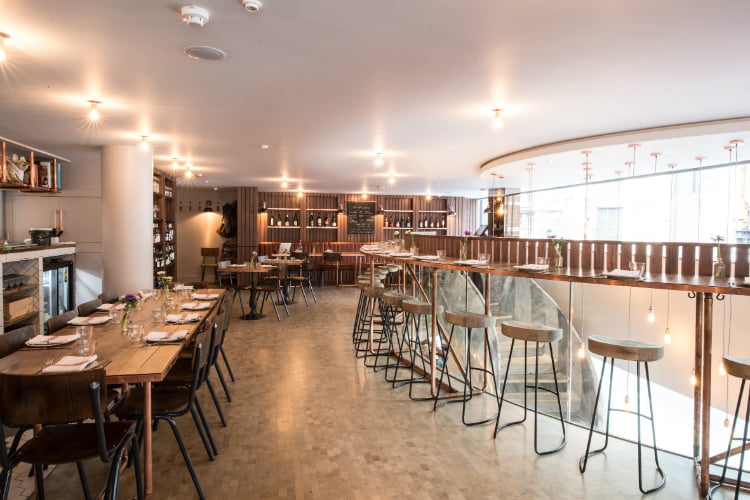 It’s not often you can say you’re dining out courtesy of Andrew Lloyd Webber. And, to be perfectly honest, it’s still a bit of a stretch here. But, if he hadn’t dined in the original Naughty Piglets in Brixton, he would never have fallen in love with their relaxed, seasonal small plates and low-intervention wine list; he wouldn’t have asked the founders to open a second branch in his new theatre, The Other Palace; and you wouldn’t have somewhere in the neighbourhood to go for XO linguine with cured egg yolk… 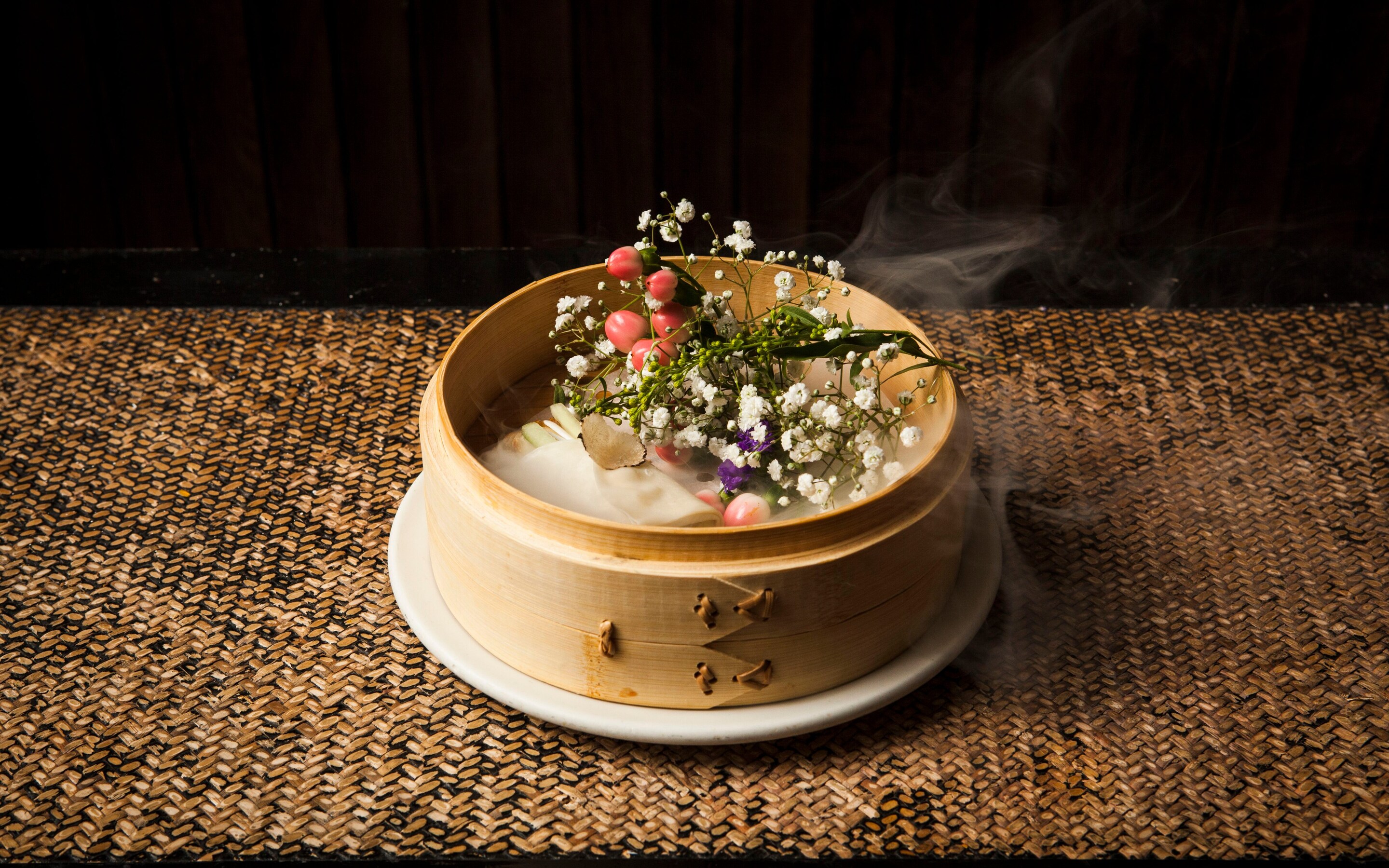 Michelin starred and critically lavished, A. Wong is the peak of fine dining in Victoria. At lunch, pick and choose from individual dim sum dishes. At night, an excellently laid-out taster menu takes you on a tour of China’s diverse culinary heritage; from poached yolk steamed rice rolls and soy chicken with caviar, to Sichuanese aubergines and prawn-stuffed chicken wings. It is, in a word, excellent. 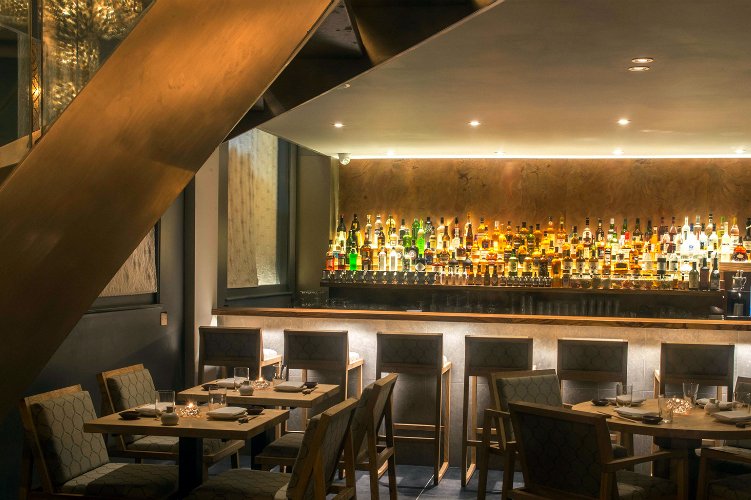 This palatial Japanese spot is best known for its mezzanine sushi station helmed by some of London’s most celebrated Japanese chefs, its exotic ground floor cocktail bar, and its tasting menu combining miso-marinated salmon and chicken yakitori with sparkling sake… and less known for its convenient proximity to Victoria Station. A fact which you should now happily exploit… 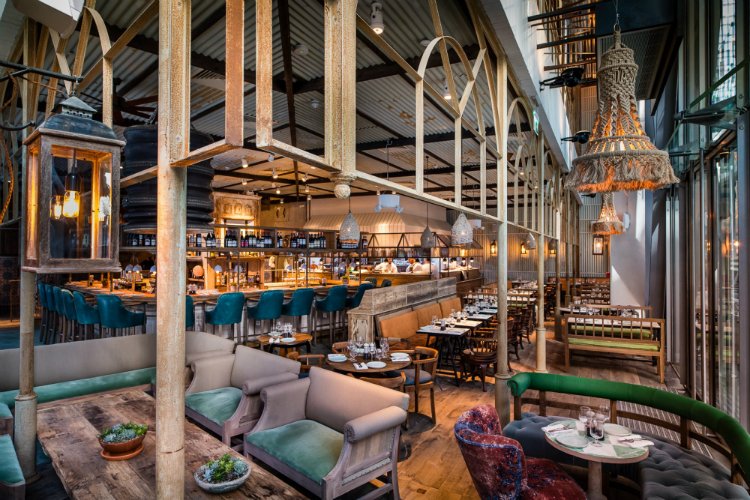 And it’s still very much on track.

Plush, bohemian surroundings are bolstered by salvaged architectural features, floor to ceiling windows and a gentle clink of activity at the central bar, while they serve classic all day dining from sumptuous brunches to wholesome warm grain salads, steaks, and fresh seafood dishes… 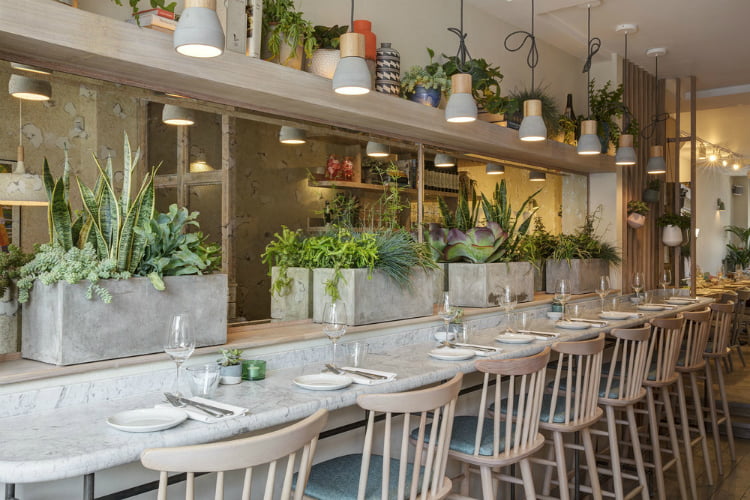 It takes bottle to put your wine list on an equal footing with the food.

But that’s exactly the idea at Lorne, which comes to you from sommelier Katie Exton and chef Peter Hall. The pair first met at Michelin-starred The Square, and between them boast experience at The River Café, Brawn, and San Fran’s triple-starred Benu. And if anyone’s going to do it… 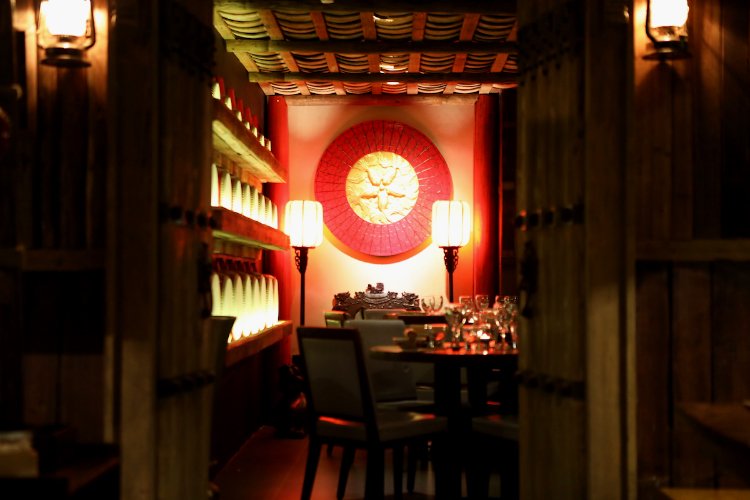 Unsurprisingly, there’s a lot of fire.

And that fire comes in the form of the searingly spicy Sichuan cuisine they’re serving up in this moodily-lit, dark bamboo dining room, hidden behind an innocuous-looking pub facade. Expect dishes like French corn-fed chicken dressed in chilli oil; vegetable and seafood dim sum; and DIY hotpots – in which the hot is, should you wish, optional. 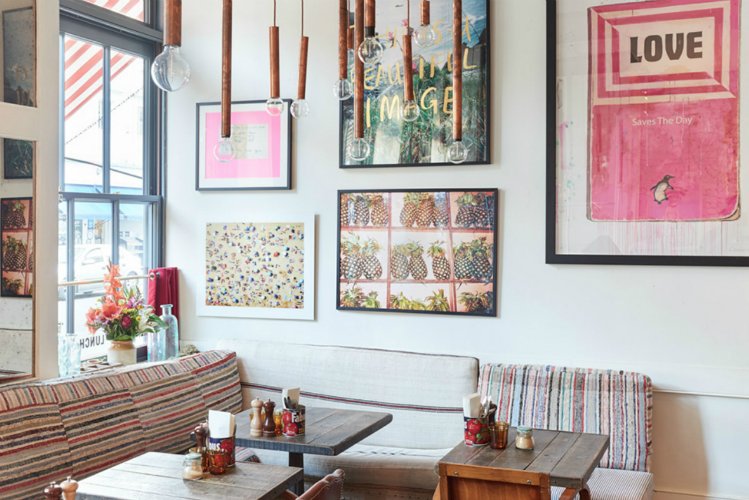 In a word, Cambridge Street Kitchen is beautiful. In 43 words, it’s a beautiful, bohemian hideaway tucked down a residential side street in Victoria, in which you can dine on everything from full English breakfasts to delicate tuna tataki, before descending into the low-lit, exposed brick-lined Clarendon Cocktail Cellar for drinks inspired by iconic films… 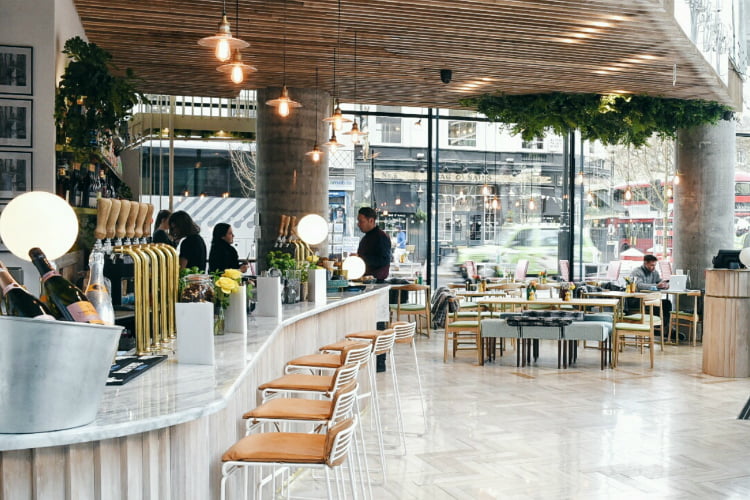 Victoria was, for a time, suffering a distinct lack of Antipodean all-day brunch spots serving vodka-spiked smoothies; poached eggs with halloumi soldiers and balsamic dust; and Melbourne Mars bar cheesecake balls. With bottomless booze. So it’s a relief that this place exists, to say the least. 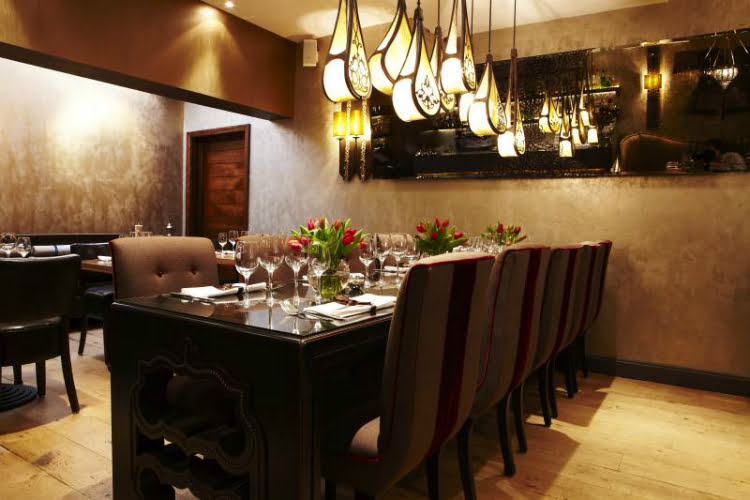 Welcoming, unpretentious, and festooned with beautiful lanterns, Kazan is a palace of ‘Ottoman indulgence’. Take your pick from  a huge range of mezze including drunken calamari marinated in vodka; tempura battered sage prawns; and a 17th century dish of pan-fried calf’s liver with sumac and red onion; before tucking into hunks of shredded, slow-cooked lamb shoulder to share. 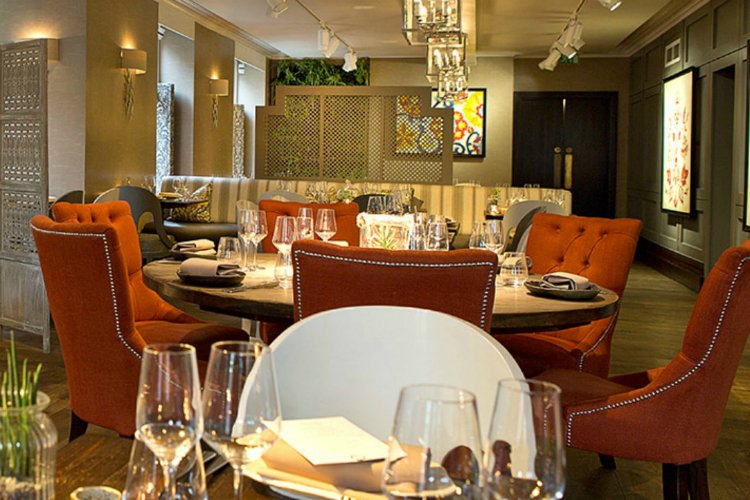 Don’t be fooled by the salad on the Caxton Grill menu – it’s merely a ruse to avoid too many people discovering the steaks, whole native lobster and chicken they’re cooking up on their (and coincidentally one of London’s first) Josper grills. After which, you’ll be free to wander the al fresco terrace, with a Bowler Hat cocktail in hand… Just be careful not to tip it.

Spend a lot of time in the area? Then you’ll need our guide to the best bars in Victoria, too