The Biggest Album To Come Out Of Every London Borough

The Biggest Album To Come Out Of Every London Borough

The streets of London, they say, are paved with gold…

Because evidently there are so many big-name musicians that have come out of this town, that every single borough can claim at least one, if not many, chart-crushing artists. And we’ve listed the biggest album from the biggest act to come out of each one… 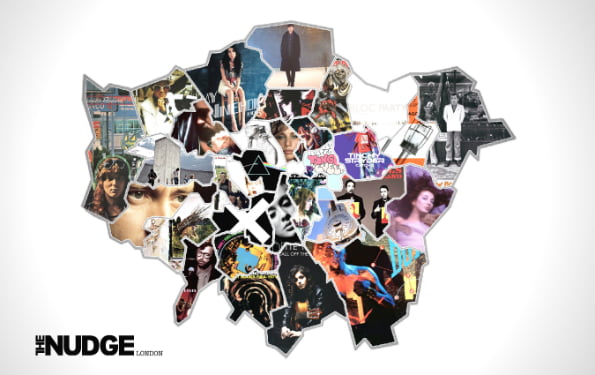 …AND HERE’S ONE WITH ANNOTATIONS!

Billy Bragg – Life’s a Riot (with Spy vs Spy)
Born and raised in Barking, Bragg started learning and practising the guitar with his next-door neighbour, Philip Wigg. In ’77 they formed the pub rock/punk band Riff Raff with Wiggy, which split in 1980. Bragg returned to Barking, joined the army, gave up, came back and launched his solo career. Life’s A Riot is his biggest seller, going gold.

Amy Winehouse – Back to Black
Amy grew up just in the border of Barnet in Southgate. She also attended the Susi Earnshaw Theatre School in Barnet, where she formed a short-lived rap group called Sweet ‘n’ Sour, with Juliette Ashby, her childhood friend. She started writing music at 14. Back to Black killed it with 12 million sales worldwide.

Kate Bush – Hounds of Love
Kate was born in Bexleyheath and raised in her family’s farmhouse in East Wickham in Welling, Bexley. While at school her family produced a demo tape of 50+ of her compositions which were turned down, until David Gilmour heard it from a mutual friend and rerecorded 3 for her, sent it to EMI and they signed her. She used her advance to pay for mime & interpretative dance classes. Fun facts! Hounds of Love deservedly went Double Platinum in UK, Platinum in Canada, Platinum in Germany, with 1.1 million sold worldwide by 1998.

George Michel – Faith
Though born in East Finchley, George Michael spent most of his childhood in Kingsbury, Brent, where his family moved soon after his birth. He went to school here before they moved again to Radlett, where he met future Wham! partner Andrew Ridgeley at his school in Bushey. Faith went and sold 20mill+ worldwide.

David Bowie – Let’s Dance
Ziggy was born in Brixton but raised in Bromley, attending Burnt Ash Junior School. His voice was considered “adequate” by the school choir, and he demonstrated above-average abilities in playing the recorder, apparently. He formed his first band at the age of 15, The Konrads. Let’s Dance is his biggest seller, with 8 million flying off the shelves on initial release.

Katie Melua – Call off the Search
Croydon also has links with Jeff Beck, Kirsty MacColl, and Stormzy – but best seller is Katie with 6x Platinum and her debut album Call Off The Search. She grew up in Georgia before moving to Sutton and attending school in Cheam (Sutton) – but commuted to Croydon BRIT school where she met Mike Batt who wrote the songs for the Wombles. As in, Remember You’re A Womble. He co-wrote the bulk of her first 3 albums.

The Who – Who’s Next
Although it was at Ealing Art College that Tim Staffell, co-founder of Queen, meets Freddie Mercury… we think that The Who take a much stronger claim to the borough. They all grew up in Acton and met at Acton County Grammar School. They started off there as The Detours in 1959. Their biggest seller: Who’s Next, with 25 million official fans.

James Blake – Overgrown
Blake lived in Enfield and attended The Latymer School in Edmonton. At school he and his friends hosted “Bass Society” music nights with artists like Skream and Benga. He recorded his first songs in 2009 in his bedroom. His second album is his biggest, thanks in part to the fact that Kanye West called Blake his “favourite artist”.

Jools Holland – Tom Jones & Jools Holland
Greenwich is strangely thin on the ground for big-time musicians. And without sheet music sales figures for radical 16th-century composer Thomas Tallis, we’re going to have to go with Jools Holland. His joint album with Tom Jones is his biggest hit.

The Clash – Combat Rock
Shepherd’s Bush “has given us more rock stars per head of population than any other area of the UK”, apparently. The Who lived there (we’ve put them in Acton though), Pete Doherty moved there at 16 and first learnt the guitar there, but The Clash are their biggest definitive act –  Joe Strummer joined (and essentially created) the group when he came to jam in their squat on Davis Road in Shepherd’s Bush, which was soundproofed with egg boxes on the ceiling. Combat Rock went double Platinum in the US, Gold in the UK, and Gold in Canada.

Rod Stewart – Vagabond Heart
Rod grew up in Highgate, went to school in Muswell Hill, and had a flat there when he first moved out of home. After a couple of years busking around Europe he came back to live at home and almost ended up with the Kinks, 3 of whom he met at school (their album sales are surprisingly low). Instead, he joined the R&B group the Dimensions as a harmonica player, supporting the Stones at the Studio 51 club in Soho. Vagabond Heart claims a huge 9x Platinum sales combined worldwide.

Elton John – Greatest Hits
Reginald Kenneth Dwight (AKA Elton) was born and raised in Pinner and attended 3 schools there. In his third home in Pinner, where he moved with his mum and her second husband, he composed the songs that launched his career and stayed there until he had “4 albums simultaneously in the Top 40”. The biggest of all of them was his Greatest Hits album, which crushed the competition by going 17 times Platinum in America alone.

Ian Drury- New Boots & Panties
Drury was raised in Cranham, Havering, and played his first public performance with a skiffle group formed at school in a church hall by Wantz Bridge in Cranham. His biggest album: New Boots and Panties.

Phil Collins – …But Seriously
Phil was born & raised in Chiswick and attended the Barbara Speake stage school nearby. His biggest album, …But Seriously, has racked up an absolutely stunning x39 Platinum sales worldwide.

The Pet Shop Boys – Actually
They met in an electronics shop on the Kings Road, and started their first rehearsals/work in Neil Tennant’s Chelsea flat. Overall, they’re listed as the most successful duo in UK music history by The Guinness Book of Records with 50 million records sold worldwide. Actually is their biggest single album with 4 million confirmed sales.

Eric Clapton – Unplugged
Clapton grew up in Surrey and was asked to leave Kingston School of Art for ‘focussing too much on his music’. He started busking around Kingston and Richmond and started playing pubs in the area in ’62 with David Brock. Unplugged (a live album) is his biggest seller with 20 million sales worldwide.

Jamie T – Kings & Queens
Jamie T grew up and went to school in Wimbledon. His biggest album, Kings & Queens peaked at number 2 in the UK charts. Hopefully, we’ll hear from him again soon.

Tinchy Stryder – Catch 22
Tinchy went to school and university in Newham, and Catch 22 went gold for him.

Bloc Party – Silent Alarm
Russell Lissack and Kele Okereke both went to school in the borough of Redbridge before going on to form Bloc Party. Thier most successful album: Silent Alarm, with a million copies sold worldwide.

Led Zeppelin – IV
Zepp first played together at Olympic Studios in Barnes village. Their IVth album sold 37 million copies, and is tied for the third highest certified album in the US at 23x Platinum.

Florence and the Machine – Lungs
Florence Welch grew up in Camberwell and met producer and musician Isabella Summers when she came to babysit her little sister. Florence then went on to study at Camberwell College of Arts before dropping out to work on her music, for which she ended up collaborating with Summers at her studio in Crystal Palace. Lungs was moderately successful for a debut album, with a mere 6 million sales worldwide.

The Rolling Stones – Hot Rocks
The Stones were first signed for a residency when they played a tiny gig at The Red Lion pub (now the Winning Post), and it’s also where Charlie Watts and Bill Wyman formally joined in 1963. Like Elton John, their biggest seller to date has been a greatest hits album, spending 118 weeks on the US charts, and going Diamond.

Dizzee Rascal – Tongue n’ Cheek
Dizzee was raised in Bow. He made his first music on the computers at school and went to summer music workshops at Tower Hamlets Summer University. He also performed on local pirate radio stations. And his biggest album? Is Togue n’ Cheek.

Iron Maiden – Number of the Beast
Maiden formed in Leyton in 1975. Their best selling album was The No. of the Beast, rocking 14 mill copies worldwide.

The XX – The XX
Wandsworth is home to The XX, who met while studying at Elliott School. Their debut album sold 900,000 copies and won the Mercury Prize 2010.

Pink Floyd – Dark Side of the Moon
Saving the best ’till last, Nick Mason and Roger Waters met at London Polytechnic at Regent Street. Richard Wright was a fellow architecture student and joined later that year. They rehearsed in a tearoom in the basement of the Regent Street Polytechnic. Dark Side of the Moon has sold a staggering 45 million copies worldwide, staying in the US charts for 741 weeks from 1973 to 1988.

The City of London

Is not a borough.

Like learning about the best stuff in every neighbourhood? How about restaurants…