If you’ve come here expecting a list of our favourite sandwich buckets, then we can only apologise for the misleading advertising.

Instead, what follows – which isn’t likely to interest you at all – is a run-down of our favourite sandwich hawkers in the city, from bagels stuffed with salt beef, to thick wedges of foccacia attempting to encompass entire meals within, all of which any self-professed sliced-bread fan should aim to tick off their list. 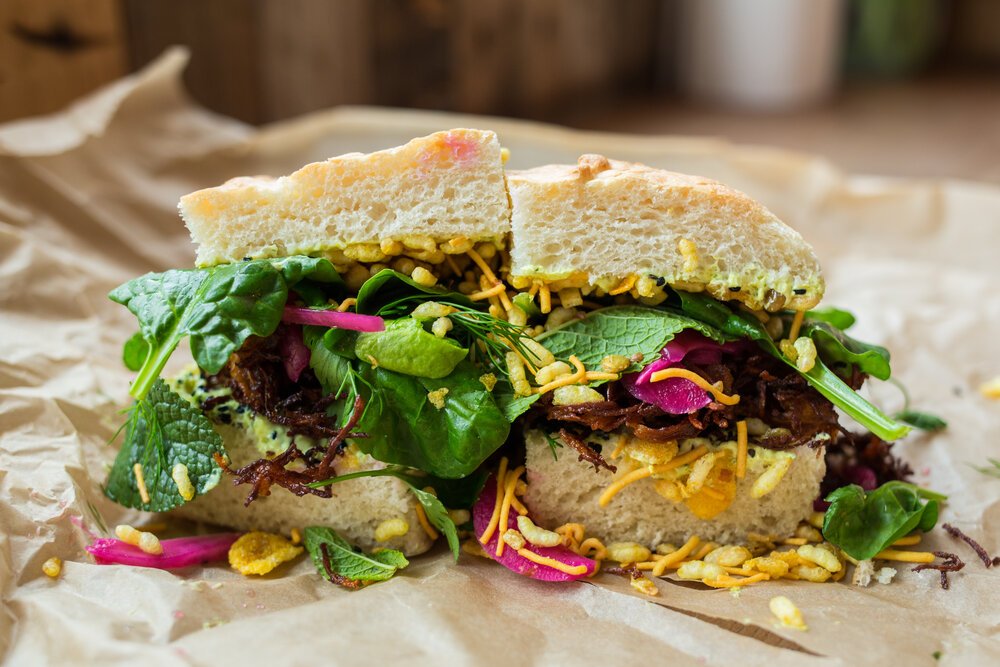 You’re expecting this, so we’re just putting it here, right at the top, so you can scroll right on past. But first, let’s take a moment to be thankful for this North London landmark that’s been elevating the humble sarnie since 2014. It’s so iconic, Comme des Garçons have designed a limited edition MSS jacket. The café’s list of influences includes Black Axe Mangal (now F.K.A.B.A.M), and ducks. Max’s is not really a sandwich shop, as evidenced by its general lack of lunchtime opening hours. This is not where you come to nurse a hangover. It’s where you come to make one, tucking into late-night editions of the literally award-winning Ham, Egg & Chips with inadvisable levels of noise and booze. 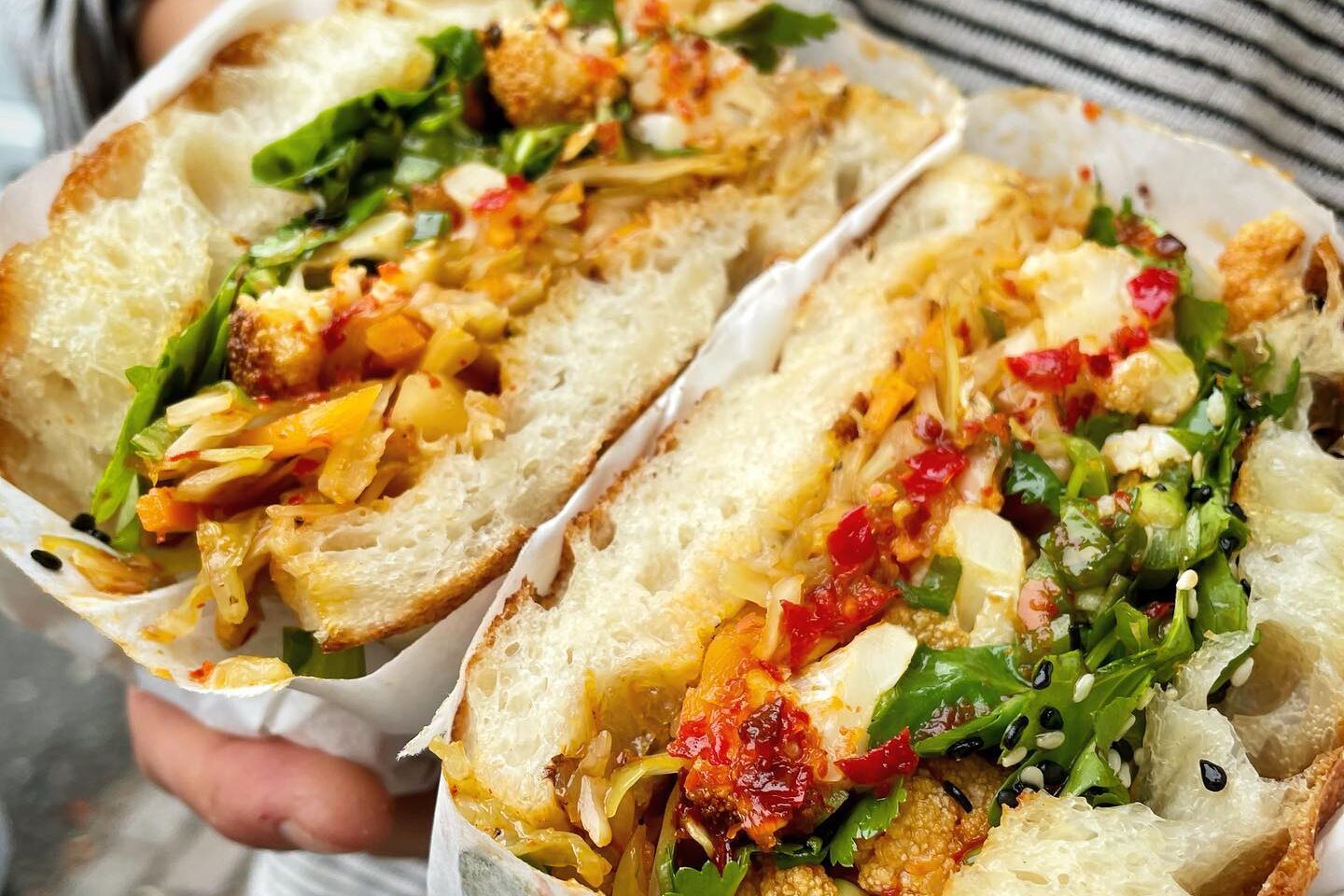 The Dusty Knuckle’s springy, freshly baked focaccia is so good, they could honestly be putting sawdust in their sandwiches and people would still be lapping it up. But they don’t; they fill them with things like roasted beetroot, dill & whipped feta or glazed cauliflower with kimchi and fried egg instead. 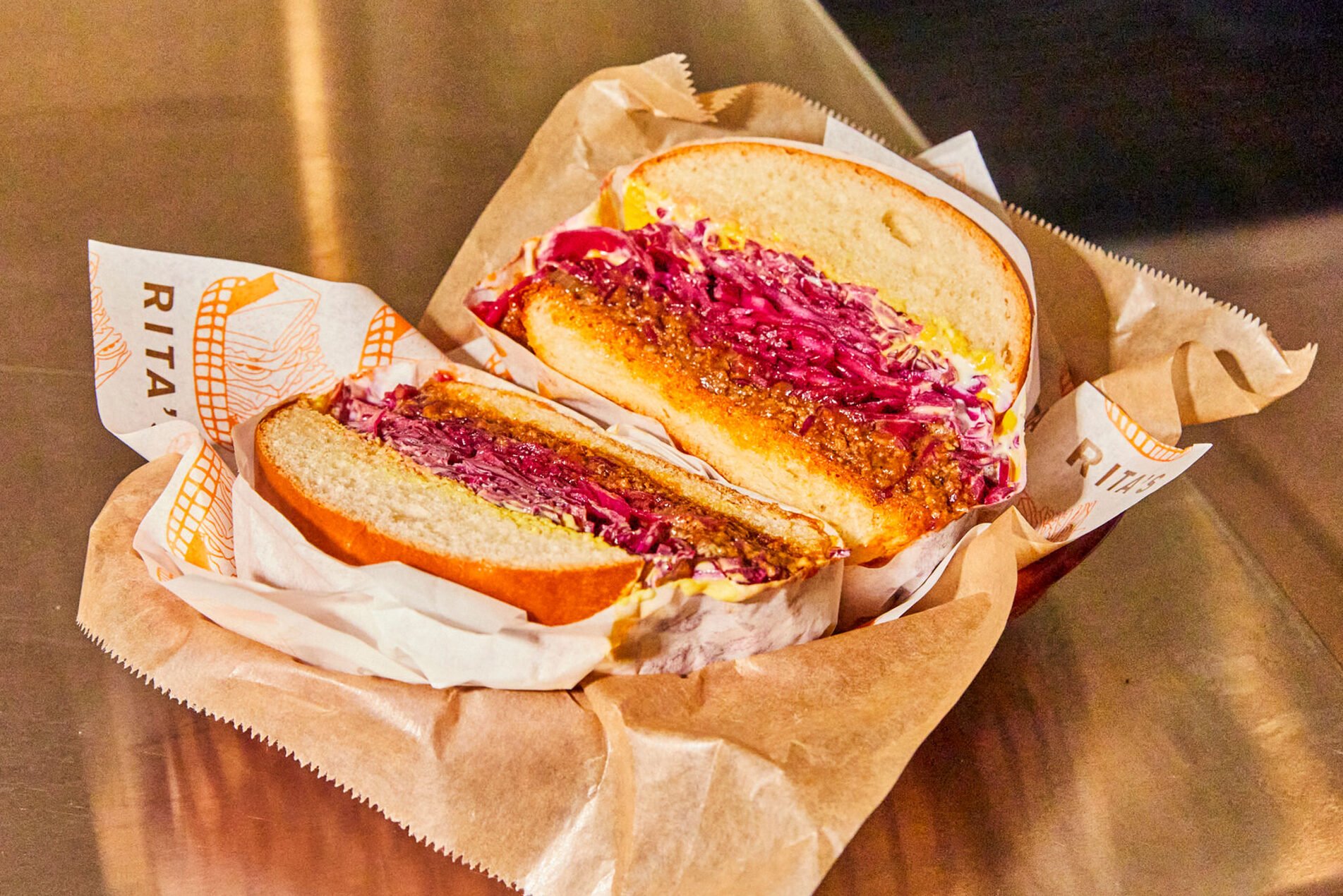 Until now, if you worked in Clerkenwell and fancied a New York-style sub for lunch, your best bet would be to head to London City Airport and catch the red-eye. Now, you can just mosey down to Cowcross Street and chow down on megalith sarnies courtesy of the Rita’s team, Missy Flynn & Gabe Pryce. Here, there’s a scratch for every itch – vegan banh mi; prosciutto & smoked cheddar; spicy cumin lamb; chicken torta or the slow-roast beef & provolone with American mustard. Also: tacos, natural wines and chipotle choco milk. 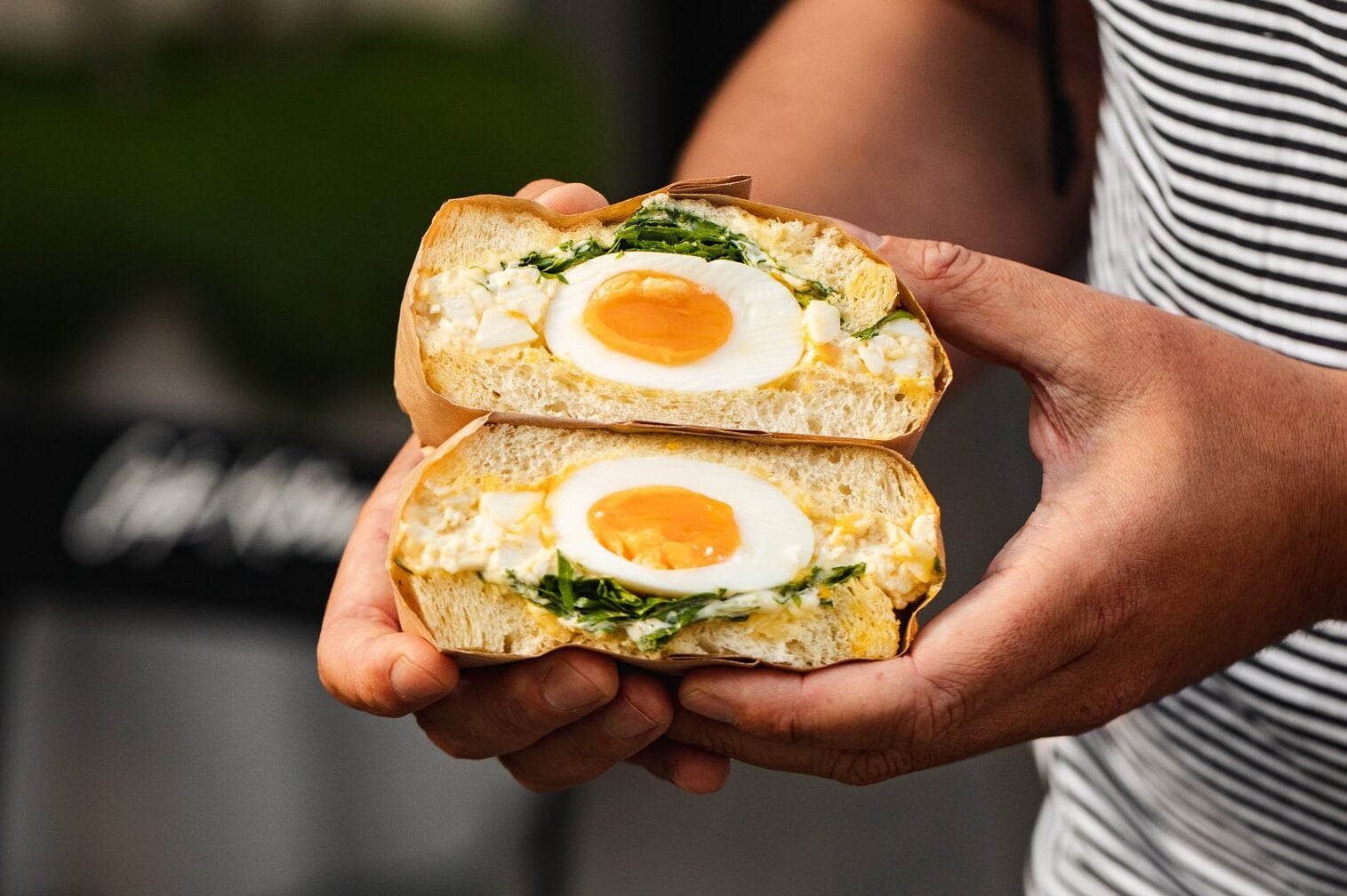 A few years back, the mighty Japanese katsu sando came blazing through London’s food scene, leaving all other sandwiches flimsy and quivering in its wake. Londoners have since recovered themselves and other fillings are now available, but… sometimes it’s really all that will hit the spot. In the absence of TĀTĀ eatery and its offshoot TÓU, Café Kitsune (part of the mighty Pantechnicon in Belgravia) has stepped up to the plate. Their menu features a zingy katsu number as well as tempura shrimp and soft, satisfyingly stodgy egg mayo sandos – and there’s a line-up of pleasing patisserie and speciality coffees to go with them. 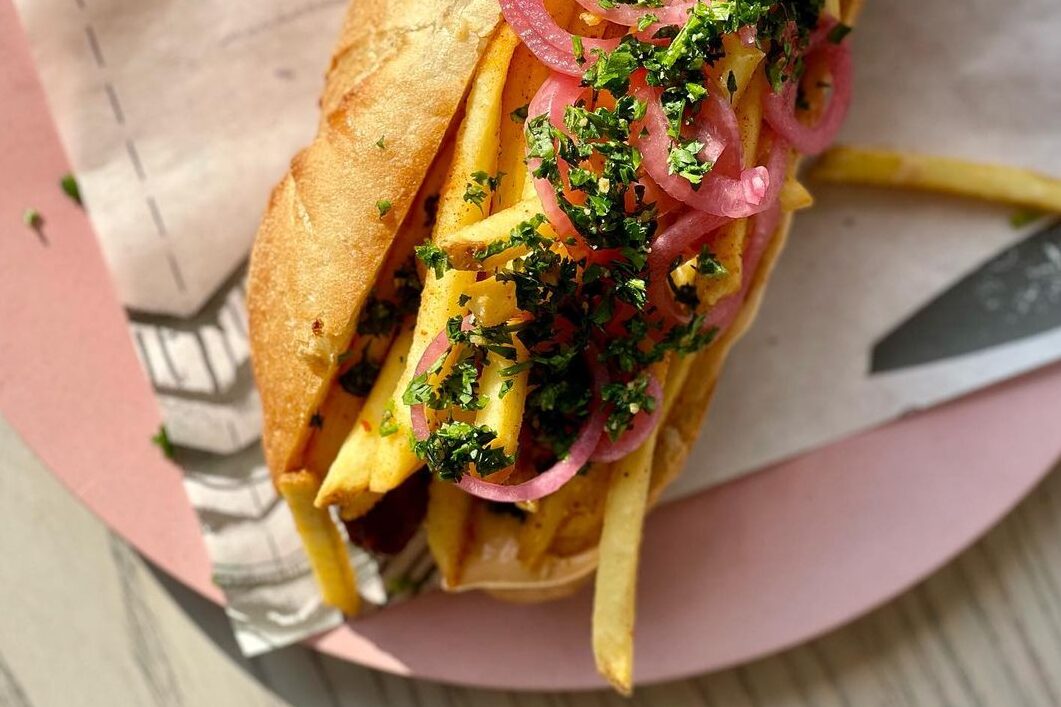 We don’t just dream about this sandwich. We have nightmares about dropping it, or a seagull flying off with it. S-and-D ‘wiches are a cut above, which is unsurprising given that the team behind it all also run esteemed Dalston restaurant Pidgin. So they don’t just do egg mayo, they do egg mayo with Burford Brown eggs, miso and truffled crisps. Roast chicken comes with soy-cured parmesan and pickled cucumber. The sausage bap comes with spicy Merguez sausage, French fries and pink pickled onions. Somehow, they also find the time to cask-age negronis and whip up soft serve ice creams, which also come in milkshake form. 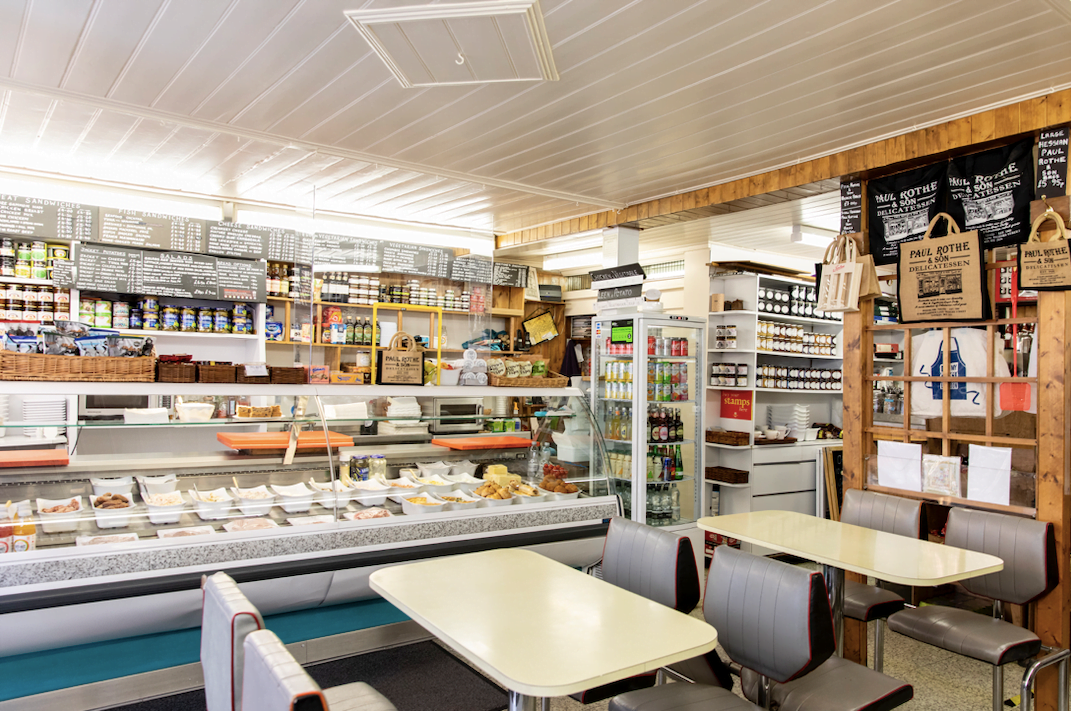 Welcome to the Rothe family delicatessen, where the decor theme is ‘jam’. Honestly, this is probably where the expression jam-packed started. Anything that’s not jam is kept under glass in a kind of upmarket Subway-style, build-your-own-adventure counter. There’s bacon; there’s tuna; there’s a variety of things slathered in mayo. They’ve been doing it this way since 1900, and they’re still some of the best sandwiches in London. 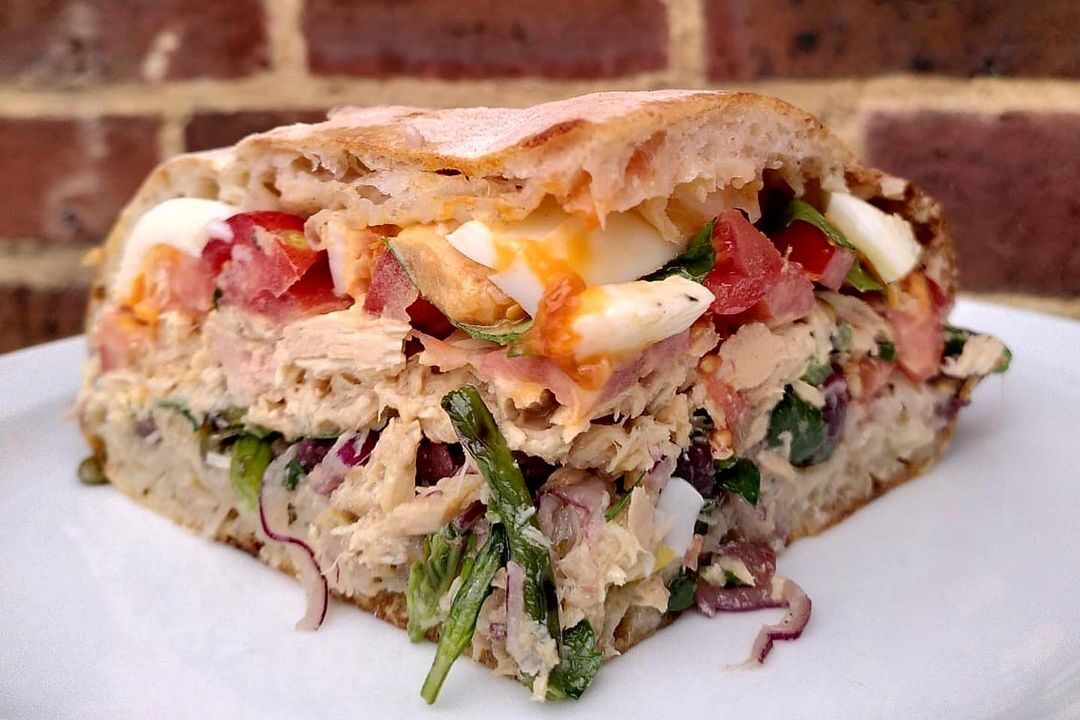 Born out of lockdown, while the rest of us were eating cans of beans in our pants, Jack Macrae started up a sandwich delivery business. It was extremely popular. So now you can find him and the team hawking cult sarnies daily at Camberwell’s Grove House Tavern, where no filling is off limits: past editions have included deep-fried lasagne; Merguez sausage & frites; vegan spring rolls; and roast beef with stilton and horseradish peas. 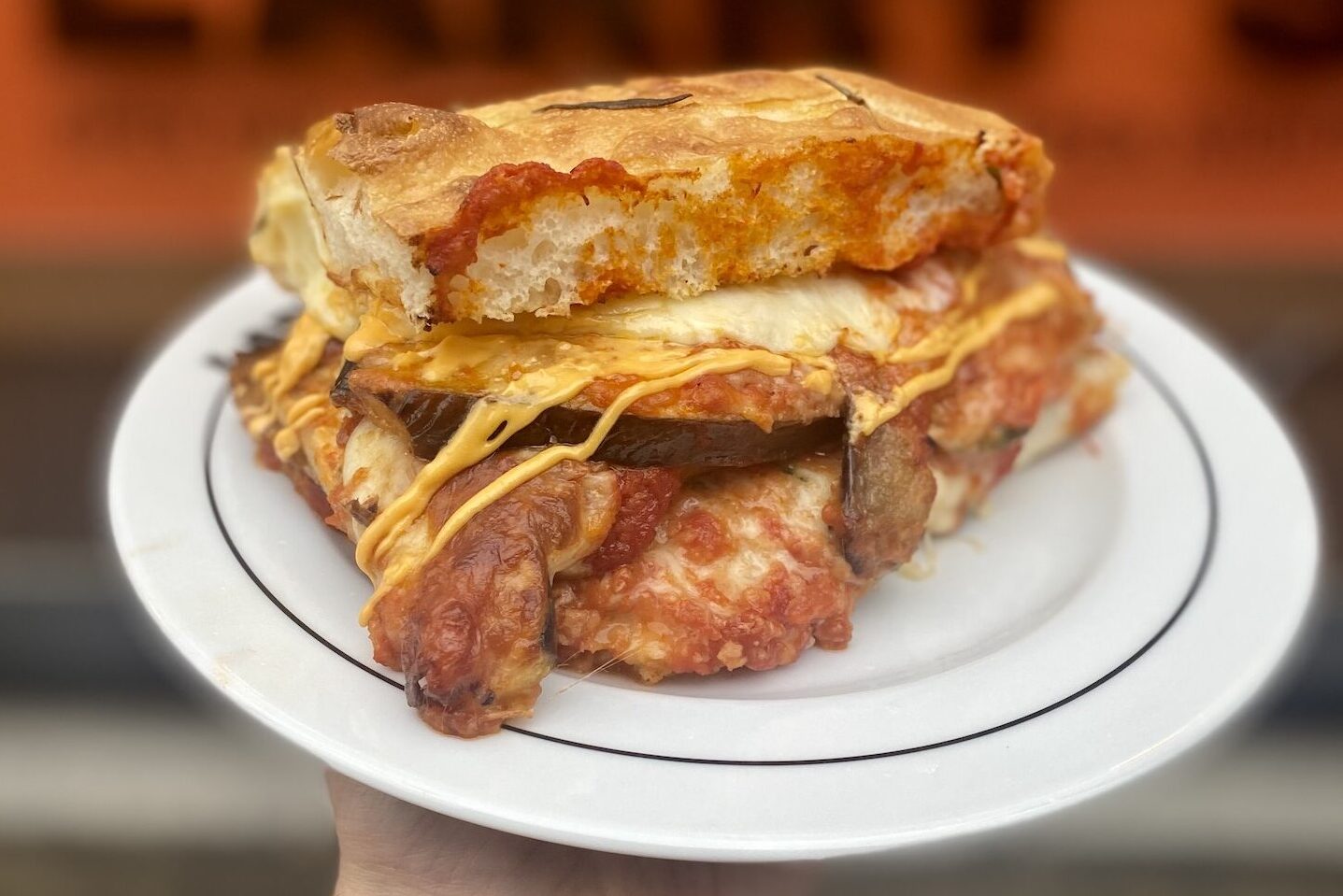 Aubergine parmigiana has got absolutely no business being in a sandwich there. Look at it, nestled between those pillowy slabs of springy, crispy focaccia. Look at that tumultuous avalanche of hot cheese and sublimated aubergine. A spot on our list of the best sandwiches in London? Never. 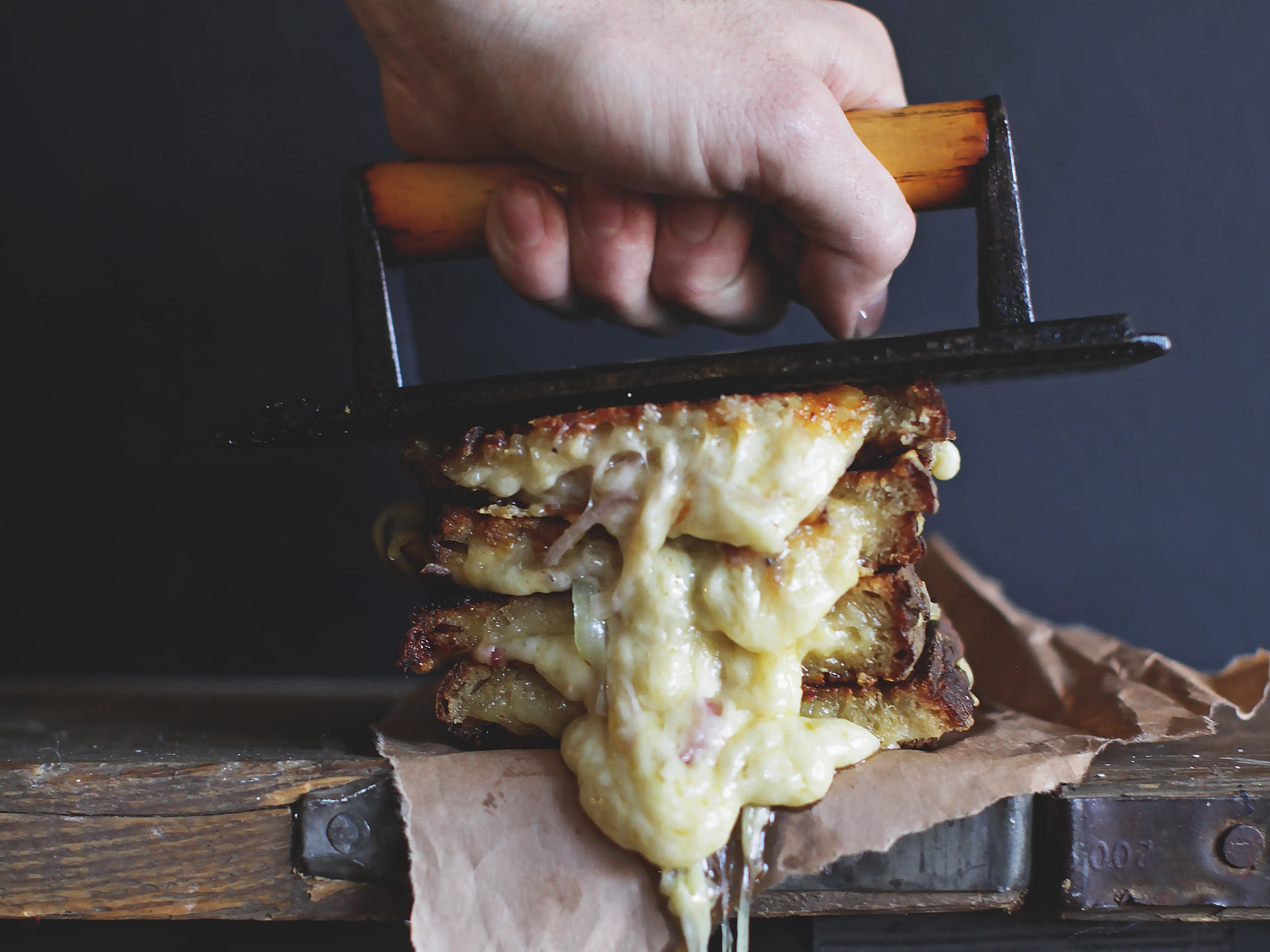 The undisputed champion of the Grilled Cheese Sandwich, Camden’s Cheese Bar started out as a street food truck specialising in these molten mothers before getting a bricks-and-mortar spot (and then a cheese conveyor belt restaurant, and then a barge. Who doesn’t love a gimmick). The upshot? You can now gorge on sourdough packed with goat’s cheese & honey; Bishop Stilton with beer fruit chutney and Ogleshield with smoked bacon… and have somewhere to wash your hands and face afterwards. 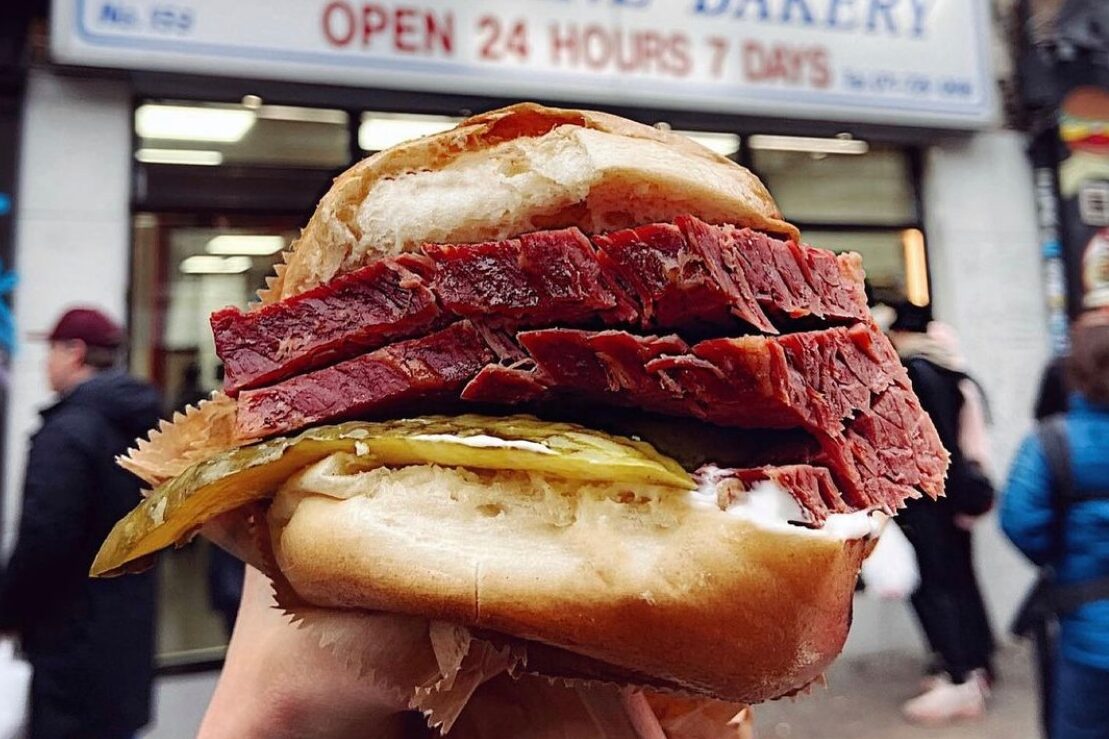 Brick Lane’s Beigel Bake has been open – pretty much continuously – since 1976. Open 24/7, they diligently turn out over 7,000 bagels a night, which are then wrapped around some of the finest salt beef, lox and gherkins in the city. Their best-sellers are creeping up towards the £10 mark, but some of the lesser-known menu items (filled with things like Nutella, or chopped herring) will still get you change from a fiver. 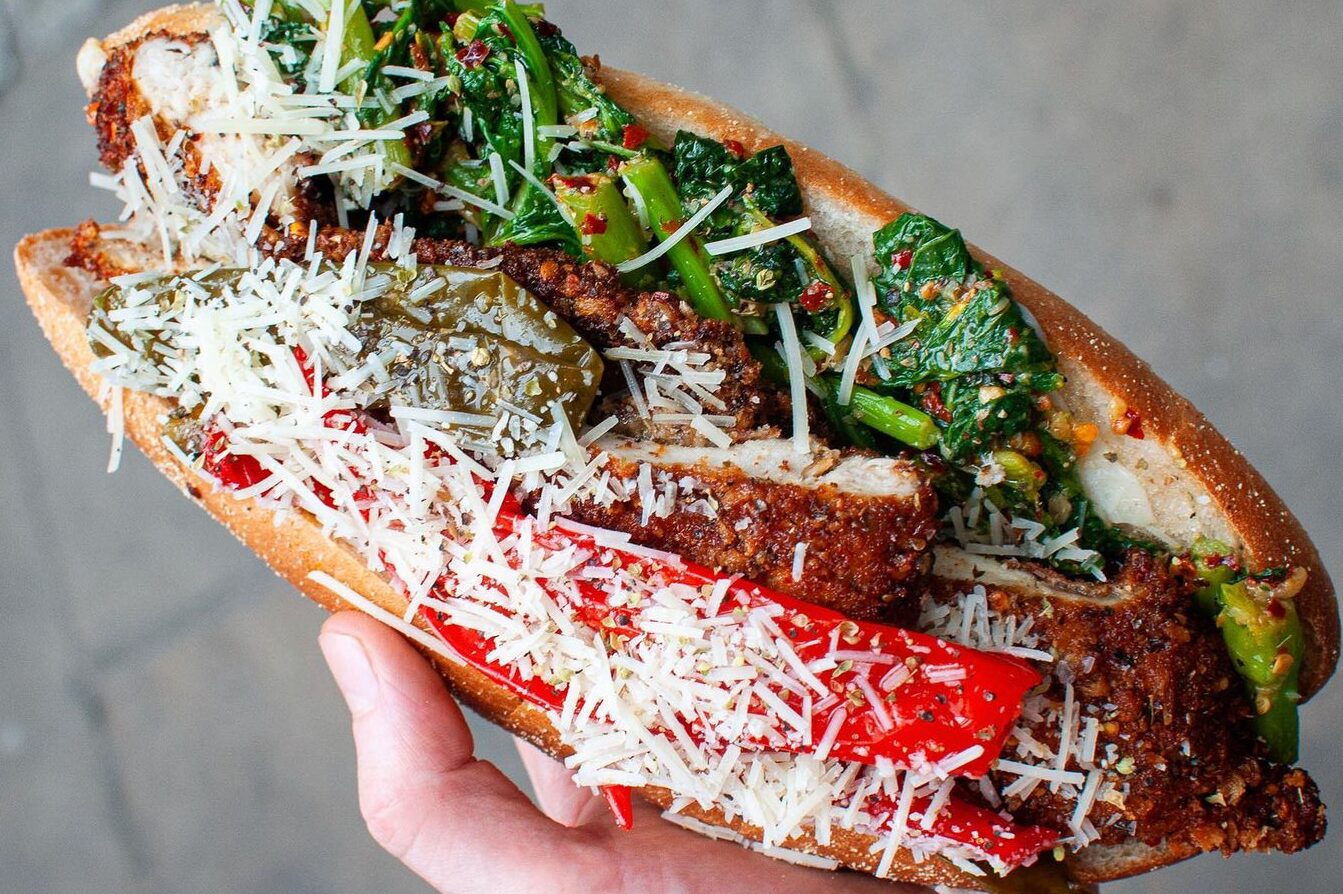 You will submit to Dom’s Subs. Why? Spicy Thai ground chicken with pickled cucumbers and red chillies; the Cold Cuts, with four kinds of cold meats with provolone and vinegar peppers; and broccoli with confit garlic, roast aubergines and marinated artichokes. That’s why. DS comes to you from the gang behind Lanark Coffee, and their two outlets are barely big enough to swing one of their outsized subs in. So it’s takeaway only – but they also run their own delivery system. 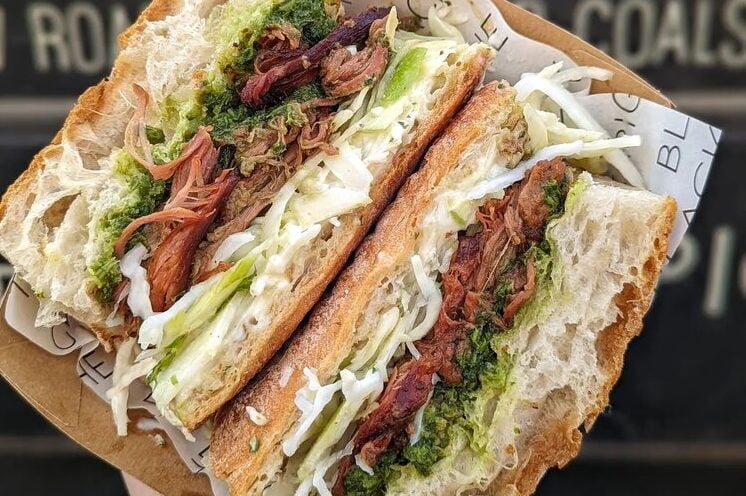 The best bread for sandwiches is a contentious and divisive topic, just topped narrowly by Brexit. Putting in a good argument for the ciabatta corner, though, is Borough Market’s Black Pig stall, which specialises in deluxe muffaletta. That’s a sandwich invented by Sicilians who moved to New Orleans in the early 20th century. Here, you’ll find them stuffed with slow-roasted free-range pork shoulder and some combination of aioli; fennel & apple slaw and honey truffle mayo; and scorched over a Big Green Egg grill. It’s worth going for the added slap of S’ott olio, a fermented chilli sauce with confit garlic. 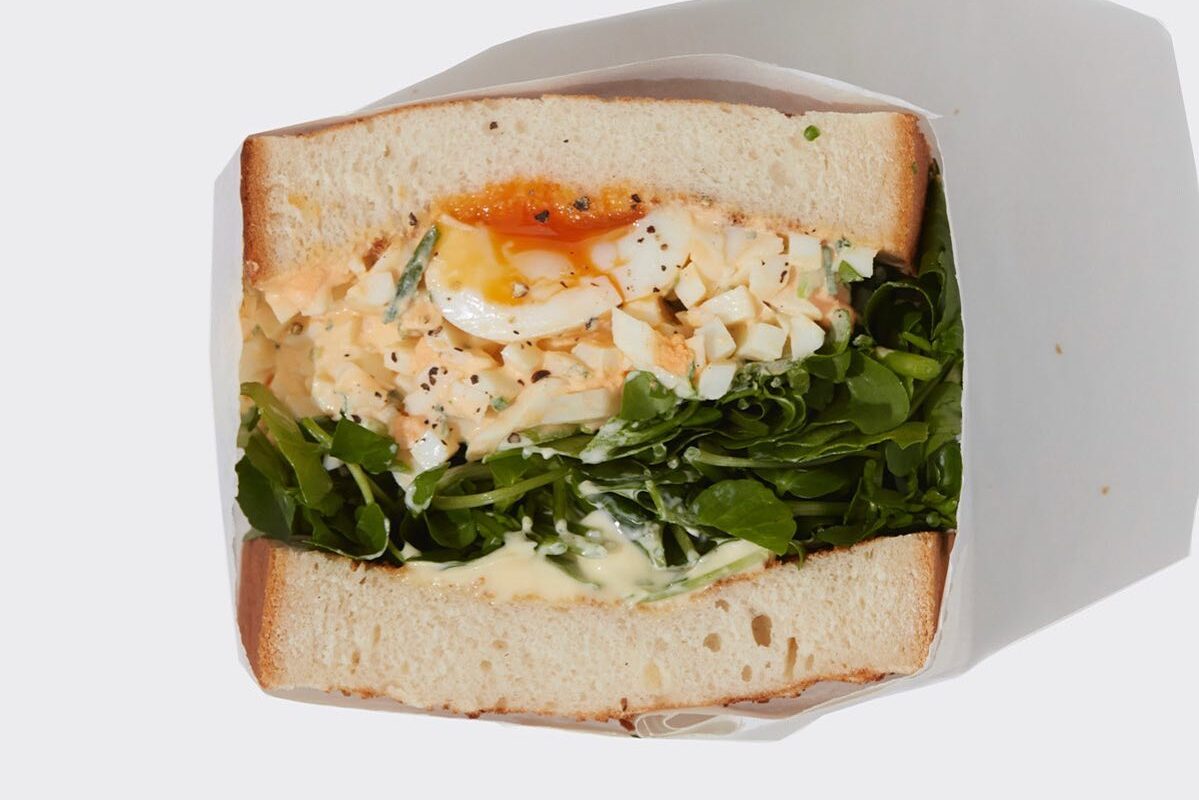 The Secret Sandwich Shop has no desire to actually remain secret, or it would make its sandwiches a lot uglier. These dictionary-thick bricks are inspired by Japanese wanpaku sandwiches, which got popular around the era of the katsu sando boom, but have more of a Ploughman’s vibe to them. Texture is the key here, and you’ll find pillowy soft shokupan bread slapped either side of crunchy greens; something cheesy; and something meaty in most cases. The cult order is the 7th Avenue, a hefty combination of pastrami, Swiss cheese, sauerkraut and crispy shallots, all lavished with Kewpie mayo. 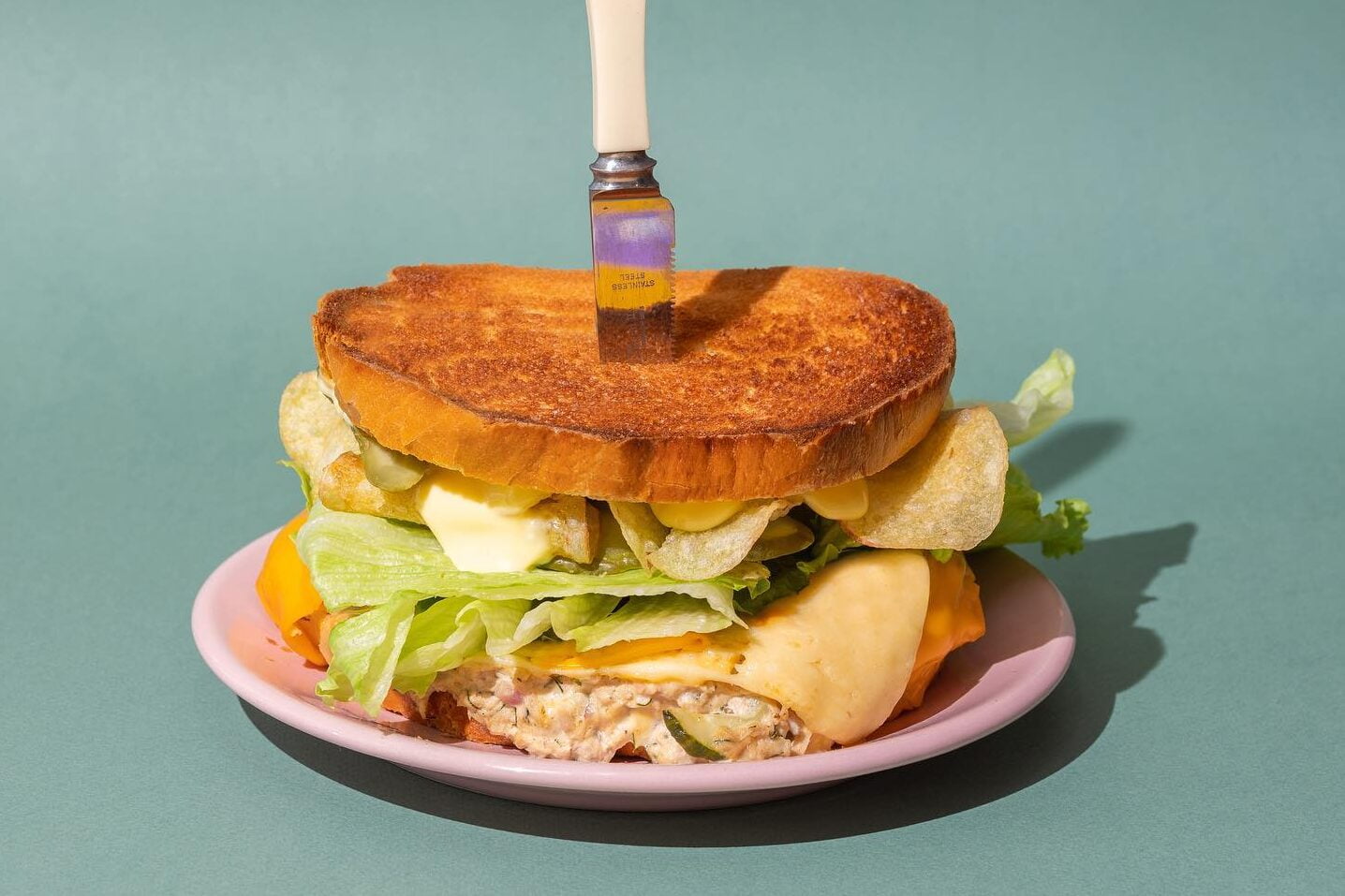 Snackbar. It’s a place for light snacks. And these absolutely enormous, King Kong-portioned sandwiches that require actual knives to maintain their structural integrity. The offering changes on any given day, so you could be facing down an English muffin packed with pork patty, fried egg & American cheese; treacle-glazed ham, roast pork & dill pickle fries in a brioche sub; or their take on the classic Singaporean breakfast staple: kaya toast with soy sauce & onsen egg. 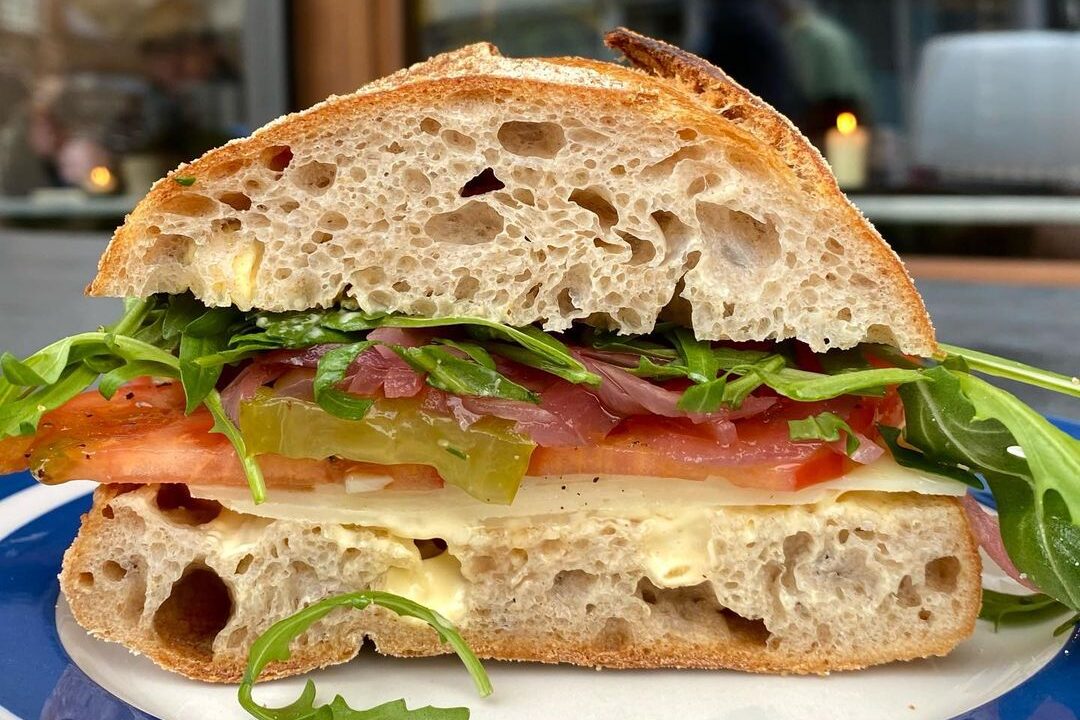 When you’re after one of the best sandwiches in London, but have things to do and places to go afterwards and can’t afford to spend the afternoon in a dough-induced stupor, you can count on Big Jo (sister to Jolene, Primeur & Westerns Laundry). The daily changing menu puts nice, well-sourced ingredients like provolone & beefy Sicilian tomato; carrot, hummus & pickled cabbage; or mortadella with mustard-spiked mayo between their freshly baked bread (made with totally organic and sustainably grown wheat flour). Manageable in size, and totally satisfying. 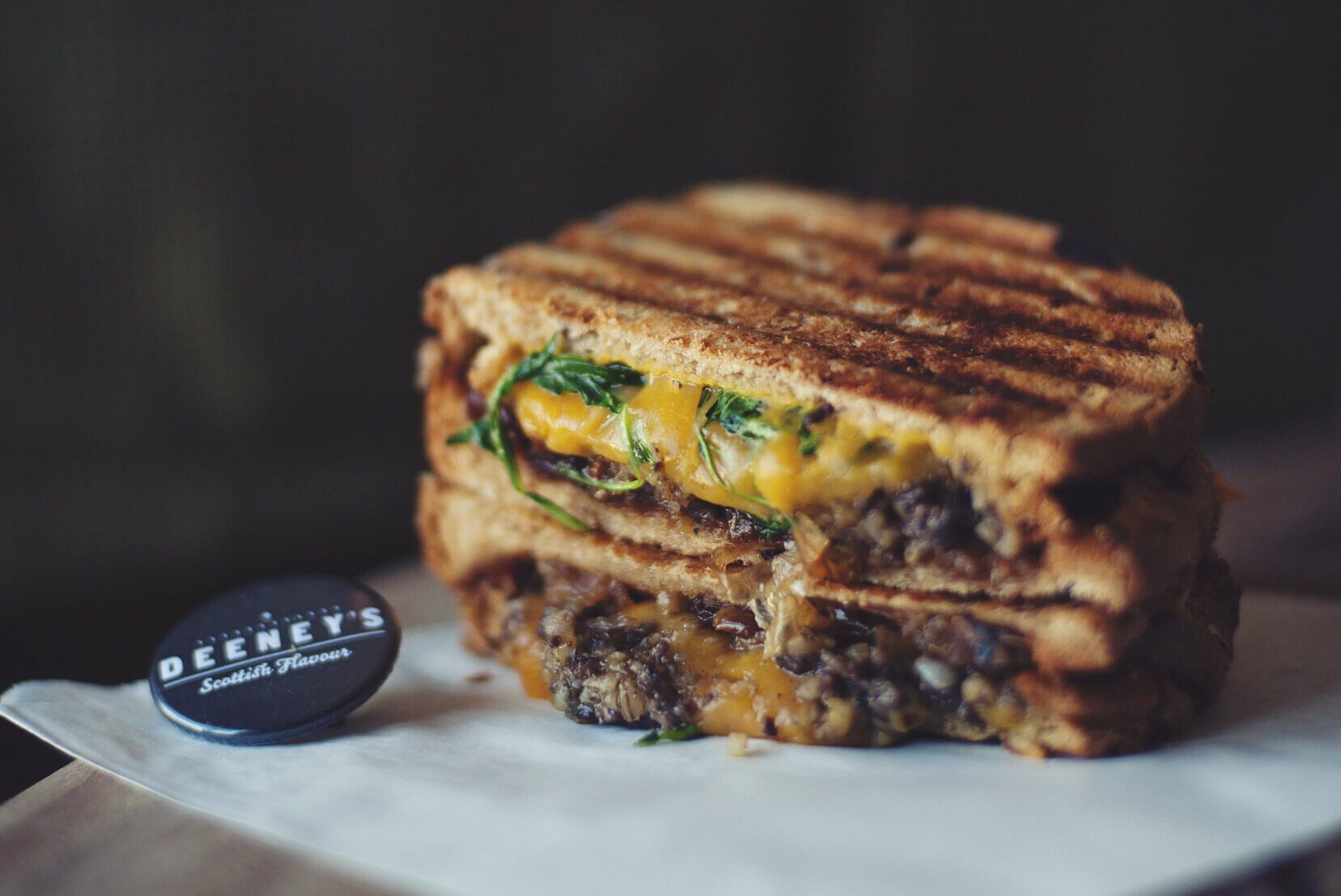 Deeney’s is here to prove that Scottish food is NOT just about deep-fried Mars bars. It’s also about, um, haggis sandwiches. Meet Hamish Macbeth, a Scotch toastie oozing with bacon & haggis (veggie options available); melted cheddar; caramelised onions and mustard. Like its namesake, there are plenty of other pretenders jostling for the throne, though: other toasties include the roast chicken & sriracha-laced Roberto the Bruce; alongside some perfectly executed breakfast baps.

Want more inspiration for your dough? Have a lie down, then check out London’s best pizza spots.