Where To Order Omakase in London

You’ve probably heard, or seen, the Japanese word omakase popping up more and more in London.

It loosely translates as “I’ll leave it up to you”, and here, it’s seen as one of the most decadent ways to enjoy sushi.

In fact, its origins are kind of the opposite.

The term really became popular in the 90s, when a boom in the Japanese economy allowed a wider clientele to visit sushi restaurants (usually the preserve of the wealthy). As more people started to visit these restaurants, sushi culture started to shift. Consider, if you will, the unabated horror 99% of us feel when handed an enormous wine list. Unfamiliar items and names are enough to bring anyone out in a cold sweat, and with sushi, even the order you eat the dishes in could show you up as a total amateur. So to prevent embarrassing any inexperienced customers, the culture of omakase – leaving the order up to the chef – was born. You can even get omakase haircuts, or clothes.

But not in a restaurant, obviously.

Omakase stems from a word meaning to trust, or ‘surrender your will’. It’s about putting your whole dining experience in the hands of the chef. Thankfully, it’s a culture that’s come to the UK alongside top sushi chefs, and in the last few months there’s been a flurry of intimate sushi bars opening that operate on a purely omakase basis. Why? Well, it’s a pretty good system for the chefs, too, allowing them to serve up the best of whatever’s available on any given day. Nothing’s wasted, and you’re getting to experience the meal just as the chef intended – just like a tasting menu at any other high-end restaurant. And more often than not, you’ll be sat directly in front of the itamae (sushi chef), who’ll be able to talk you through exactly where each ingredient came from, and how it’s been prepared.

So in honour of this thriving tradition, we’ve put together our pick of the best places to order omakase in London, for every budget. And as for which is the absolute best?

We’ll leave that to you. Sushi Atelier is the perfect introduction to the world of omakase. It’s a snug, casual sushi joint just a stone’s throw from Oxford Circus, brought to you by the team behind the upmarket Japanese eatery Chisou. That means sushi that’s the quality of a high-end restaurant, in surroundings that are totally relaxed, warm and welcoming. The omakase options here allow you to plump for a chef-picked selection of six, nine, or twelve pieces of sushi, which you can pad out with larger dishes like ceviche, donburi (rice bowls), and wagyu sliders if you’re still feeling peckish. READ MORE 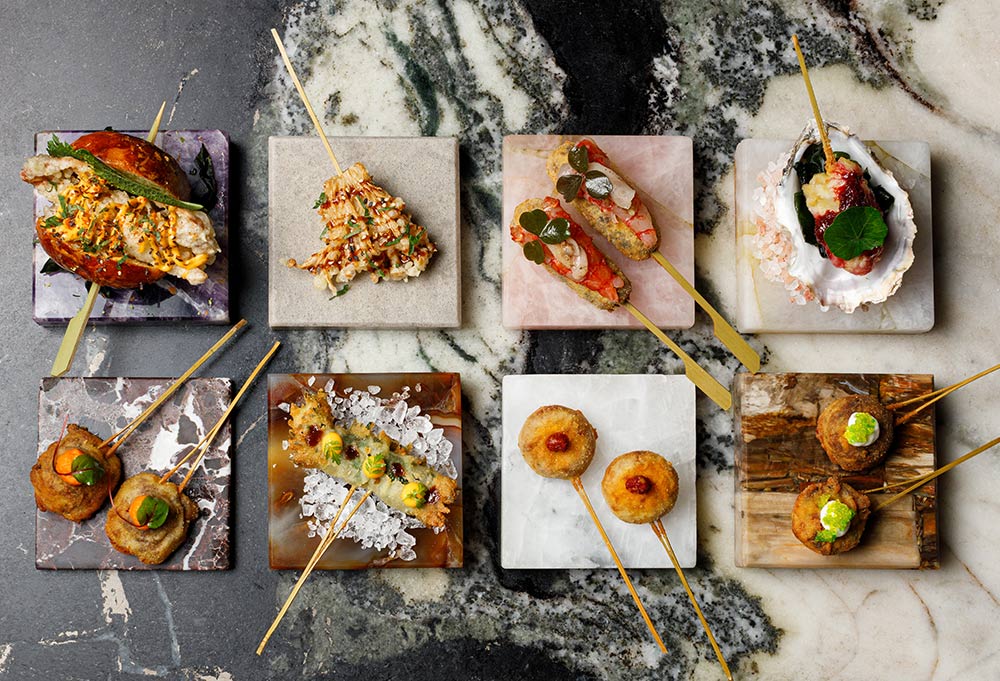 Here’s an omakase-style option for those who aren’t just in it for the sushi. This Soho spot is the follow-up to the unexpectedly brilliant Angelina in Dalston, where the chefs have perfected the art of combining Italian and Japanese culinary influences. Here, they’re focussing on kushikatsu, or deep-fried skewers, a style originally hailing from Osaka. They’re calling the format omakase – striiictly speaking, it’s more of a set tasting menu, with three of four dishes brought over for each of the six courses – but in the interests of variety and affordability, it’s well worth including here. If you’re prepared not to read the menu, you can still enjoy the element of surprise – especially if you plump for the drinks pairing, too. READ MORE Sushi on Jones started out doing omakase for New Yorkers. That meant serving it up from a kiosk, on the street, with a 30 minute timeframe. It was a colossal hit. Now they’ve opened their first international branch in Goods Way, the food, drink and music hub right by the canal in King’s Cross. The setting’s a little more refined here – a low-lit counter for eight, indoors – but they’re keeping the emphasis on speed, serving you 12 pieces of sushi in 45 minutes. And it’s the most delicious fast food you’ll have ever eaten – diligently sourced, beautifully prepared, and served up to you amid a flurry of chatter and sake. READ MORE The fancy sibling to Sushi Atelier, Chisou actually offers some surprisingly affordable omakase. In their Mayfair restaurant, it’s served up at both their fresh fish counter and the six-person chef’s table, and the nigiri (fish with rice) and sashimi (just fish) options come in at around £25 a head, available in servings of 6, 9 or 12 pieces. Wash it down with a little ‘super-chilled’ Asahi, and follow up with some larger dishes like the wagyu steak skewers, deep fried rock oysters and tofu kitsune udon. READ MORE Kazu is perched on one of the streets most densely packed with restaurants in London. So if you’ve already done the hard work of making the decision of where to eat (and you end up at Kazu), let the chefs take care of your sushi order. They’ll put together a selection of ten, five or three different kinds of fish, which you can watch them expertly slice up before your eyes at the corner dining counter. READ MORE You’ll find chef Shimizu Akira’s restaurant bedded in to the first floor of Japan House, Kensington’s hub of Japanese culture that’s home to exhibitions, shops, screenings and talks. He operates according to his ‘trinity of cooking’ principles: food, tableware and presentation. That means meticulously sourcing ingredients; hand-picking the glassware and crockery from artisans across Japan; and showcasing the kind of theatrical flair made famous in London by Benihana, with dishes seared with a lick of flame from the robata grill. The vast menu here – spanning from raw, to grilled, to fried – can be neatly condensed with the omakase option, available either purely for sushi, or with Akira-san’s pick of the grilled dishes included too. Cubé is intimate, with a sushi counter seating just 7 guests at a time. Which isn’t so unusual for omakase restaurants – what is unusual is that eating here won’t push you past the £100 mark. You’ll be treated to two appetisers, ten kinds of nigiri sushi (fish layered over a little bullet of rice), temaki (a sushi hand roll), and a dessert – ask for the sesame ice cream if it’s on offer. Afterwards, you can slip down to their low-lit bar, where you can sip Japanese whiskies, sake by the glass and bottle, and even sample something from the owner’s own cellar. READ MORE Endo is one of those restaurants that is show-stopping in every respect. Firstly, the setting: perched at the top of the old BBC television studios in White City, it has amazing views pouring in through the floor-to-ceiling windows – or rather, floor to beautiful, cloud-like folds of paper windows. The Michelin-starred food matches the heavenly atmosphere: third-generation sushi chef Endo Kazutoshi assiduously prepares a 20 course omakase menu for just ten guests each sitting, tailoring the dishes not just according to what’s good that day, but to your personal tastes as well. And he wants the experience to be like a supperclub, even commissioning a curved counter so that you can chat to your fellow guests. We think you’ll have plenty to talk about. READ MORE A teeny tiny sushi spot tucked down a Clerkenwell alleyway, which feels more like a supperclub hosted by husband and wife duo Toru and Harumi Takahashi than a restaurant. Reservations here are like gold dust, but with a little perseverance and a phone contracted with unlimited minutes, you’ll be able to score a seat at the counter where Toru-san deftly prepares (and occasionally blowtorches) beautiful slices of fish before your eyes. READ MORE A restaurant experience that you’ll remember for years afterwards. Husband-and-wife team Nobuhisa and Yuko Takahashi run this relaxed and intimate Wimbledon eatery, serving Japanese dishes with a gentle Mediterranean influence. An extensive sushi and sashimi menu is bolstered by ‘tapas’ dishes of grilled king crab leg, crispy pork belly with miso and lightly battered vegetable tempura – but plump for the omakase and you’ll get a selection of all the best dishes on offer that day, from raw swimmers to grilled meat and sweet desserts. Maru comes to you from chef Taiji Maruyama, and we mean that in a sense that’s much more palpable than most other restaurants. You’ll walk in, take your seat at the counter (there were ten, but feeling that wouldn’t allow for enough time with each diner he quickly reduced it to six) and Maruyama will personally prepare and serve a 20 course omakase menu that changes every night. It’s almost entirely put together with British ingredients, and as a third-generation sushi chef you can expect him to come up with some pretty creative dishes. One highlight which is likely to make a regular appearance is the king crab, served in a silver bowl cast from the shell itself… READ MORE We’re fairly sure you’re actually more likely to win the actual lottery than score a seat at this super-popular omakase experience. See, it’s not actually a restaurant. Owner Chris (who puts the ‘Kurisu’ in Kurisu Omakase) instead hosts at his parents’ restaurant, Ichiban Sushi, that’s been around since 1999. He’s been soaking up skills during all that time, later heading off to train at the Tokyo Sushi Academy and returning armed not just with technique, but some genius-level creativity that brings a new twist to the genre. On occasional nights, when the restaurant’s closed, he welcomes eight guests up to his makeshift sushi counter, telling stories, handing over exquisite slabs of fish, and occasionally getting the blowtorch out. Much like Sushi Tetsu, getting a seat is a sweaty palm-inducing ordeal involving multiple screens, Instagram live, and some F5 button-mashing, but if you can get them, it’s more than worth it.

Prefer to be master of your own destiny? Check out these other great sushi restaurants (with menus)