Maybe Alfred Hitchcock was onto something with The Birds…

Go for a stroll around one of London’s many parks and your moment of tranquillity will inevitably be broken up by the sound of a rather unruly shriek. Fortunately, it’s not a squirrel strangler on the loose, it’s just those damn parakeets that seem to love the sound of their own voices (they’re apparently very sociable birds).

The species originates from Central Africa and India – the ring-necked parakeet, rose-ringed parakeet or psittacula krameri if you want to get scientific about it. But give or take, there’s roughly around 50,000 of them flapping about London these days (and if you’re wondering how they cope with the cold months, parakeets usually spend time in the foothills of the Himalayas – so our winters are in fact nothing to them).

At first, London’s parakeets mostly stuck to areas in the south-west like Twickenham and Kingston, but they’ve now spread their bright green wings to most parks and suburban gardens in the capital. Parakeets are basically the new pigeons. 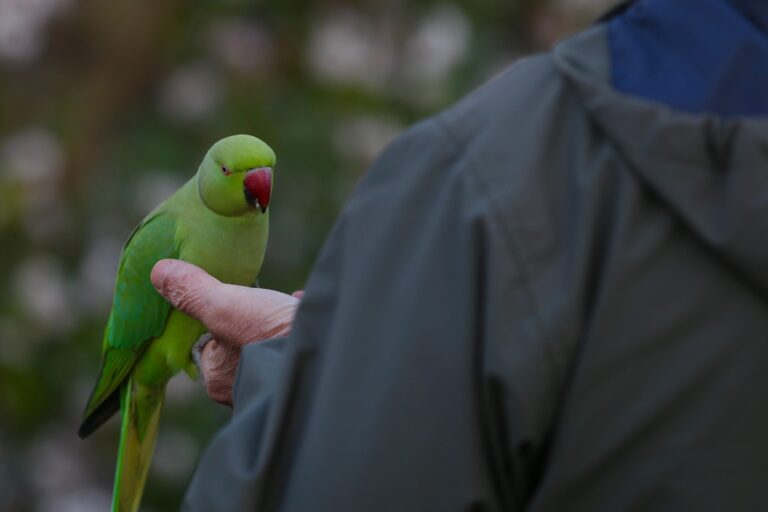 The million dollar question though is where did all the parakeets in London actually come from? Exact origins are unknown but like with most urban legends there are few rumours floating around. Here are some of the more prominent (and wackier) myths:

It was Jimi Hendrix’s fault: In 1968, the rock star – as one does – was walking down Carnaby Street with a pair of caged parakeets, aptly named Adam and Eve. He set them free (reports conflict on the reason being either as a symbol of peace and love or just because he was high, or probably both), they then flew off into the sunset and the rest was history. Hendrix has since been cleared of any wrongdoing.

Blame nature: Of the many things on the Great Storm of 1987’s path of destruction were the aviaries around Surrey. Some say that hundreds of the sneaky birds made the most out of the situation, fleeing the scene when their confinements were torn to shreds and going on to kick start the parakeet revolution that London enjoys today.

Film stunt gone wrong: Another eyebrow-raising tale that you might hear down at the pub is that two parakeets, winged co-stars to Katharine Hepburn and Humphrey Bogart in The African Queen, flew to freedom while the crew were filming jungle scenes in West London for the 1951 adventure flick. The sceptics will say this is fiction, as no parakeets made the final cut of the film and no real parrots were apparently used during production.

Accessories to robbery: When a group of burglars broke into George Michael’s giant Hampstead gaff in the ‘90s they probably didn’t expect unleashing parakeet pandemonium upon London to be part of their perfect crime. It’s been said the thieves accidentally released them from the singer’s private aviary (yes, he had one of those…).

The less romantic but probably most realistic theory comes from researchers, who state that London’s parakeet contingent can be explained by the ‘parrot fever’ that swept the nation in the early 1930s and 1950s: a contagious respiratory disease called psittacosis that the birds carried. To avoid a mass cull or catching the disease themselves, owners instead released them into the wild.

While any legitimate truth in these accounts might be murky, there’s one more great debate that surrounds the current parakeet hysteria: are they friends or foe? Well, Londoners have a love/hate relationship with them. On one hand they add a touch of the tropics to the city’s often-criticised grey landscape and they’re also kinda cute (to some). On the other hand, they can nick fruit and food from other native birds, bully smaller birds with their superior size, subsequently disrupting the ecosystem, and their loud form of communication can be fairly agitating to the general public – especially if they’ve pitched up in your backyard.

That can be a hoot…

NOTE: While you’re never too far from a parakeet sighting, Kensington Gardens in Hyde Park is alleged to be one the best places for close-up encounters and the chance to possibly even feed them.


Spurred on now to go parakeet spotting? You can spy them in some of London’s secret gardens