Everything in the known universe either is, or is not, a Parisian-style bistro in East London run by three brothers who named it after their mother.

We’re here to talk about one of the very few things that is.

Because after the riotous critical success of Blanchette Soho, the fraternity of siblings behind the joint decided to give it a sibling of its own over on Brick Lane.

Like the original, it’s a casual, deeply French eatery – but unlike the original there’s a beautiful marble countertop parked in front of the bentwood chairs, hanging plants occasionally punctuating the ceiling, and a huge Belle Epoque-style painting of a nude woman dominating the bar area.

The food’s also changed, with dishes picked from Southern France and North Africa to add to the classic fare on offer. You’ll still be able to get classic starters of crispy frogs legs, charcuterie, and cheeses from around the country… but they also have Southern French style lobster & salmon sliders, too. 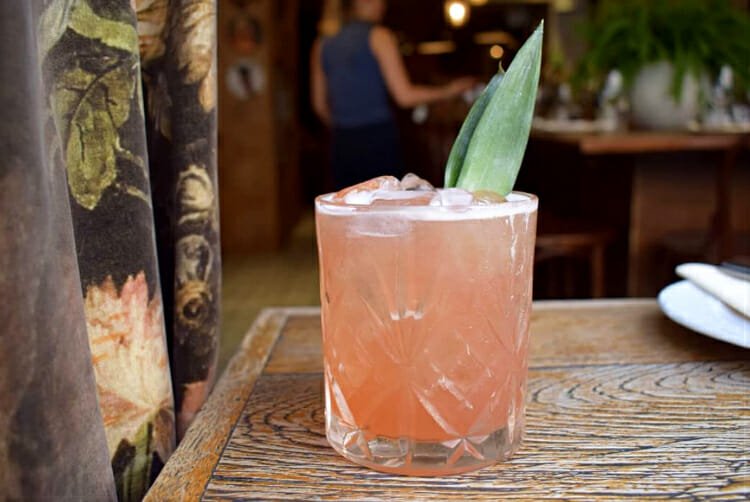 Mains include lamb tagine with apricot; whole roasted baby chicken with duck fat potatoes and tarragon jus; seared onglet with snails, parsley, garlic, and soubise sauce (like Béchamel, but with onions); and even some baked Moroccan eggs with peppers and flatbread.

Dessert-wise, meanwhile, things get even more boat-pushing – you’ve probably never had chilled peach & saffron soup, or basil sorbet with fresh mango before. But you will.

And to drink? Well, there are the standard-but-extremely-well-made classic cocktails (Whiskey Sour, Gin Fizz, etc.). And of course, being French they also have a carefully curated wine list …although they do allow it to stray into Italy and Spain, too.

After all, those are some of the nicest places for wine in the known universe.

NOTE: Blanchette East has sadly now closed, but you can still find the original in Soho.

Looking for somewhere to eat? Check out our pick of the best Shoreditch restaurants.