Genuine Liquorette wants to ‘break down the barriers between bartender and customer’.

But don’t worry, they’re not just smashing up the bar.

Instead, they’ve merely opened a bar where you’re pretty much in charge of your drinks, modelled after an eponymous basement bar in New York.

This London bar, however, is planted in a former Victorian pub in Fitzrovia, which they’ve dressed up with diner-style chequered floors, olive green walls and a huge island bar, with shelving propping up unusual spirits, cans, and an automated queue machine. 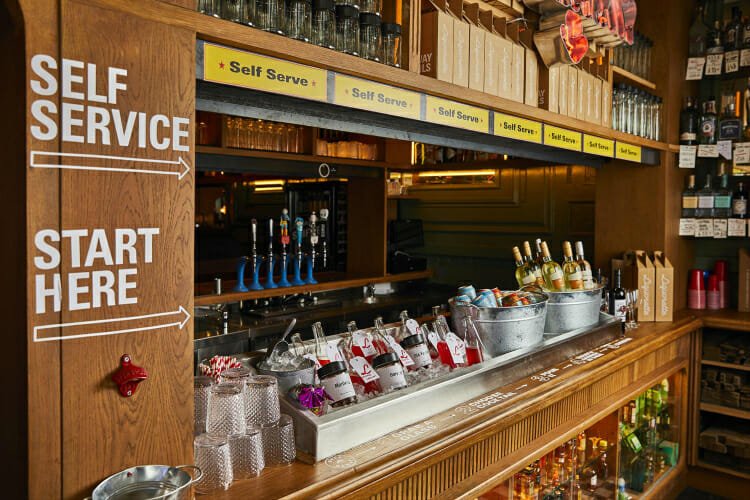 You’ll also spot a large, dark green enigma sitting on the bar that looks like a cross between a Kitchenaid mixer and a pneumatic drill. This is the cha-chunker – a machine that punches a wider hole in a can top, so that a miniature bottle of spirits can be inverted into it. But if you’re after a drink that involves a little more – well, creating, you can order one of their ‘All Star’ house concoctions too – or take on the mantle yourself and make your own under the guidance of their barkeeps. Functioning as an, ahem, genuine liquor store as well as a bar, you’ll be able to pick whatever booze appeals to you most, before learning how to mix it into something delicious.

And now? They have a self serve cocktail bar, too. You can pour them from draught taps, or get them in chilled bottles with a selection of garnishes.