NOTE: Hercules has closed, and this space is now a sequin-drenched bar called Jimi Loves Gloria.

The Soho pub called The Pillars of Hercules has transformed itself into a “cocktail pub”, simply named Hercules.

Yes, the drinks have gotten a lot stronger.

The centuries-old Pillars of Hercules (namedropped in A Tale of Two Cities) itself is on Soho’s Greek Street, and thanks to the adjoining Manette Street – which almost seems to run directly through the pub – it allows the place to show off its broad-shouldered sturdiness in suspending the stories above it over thin air.

The venue itself has been given a top-to-bottom overhaul, but retains the critical elements of any pub: wooden fittings, bentwood barstools, elbow-height tables clutching the wall, etc. On top of those, however they’ve draped a layer of cocktail bar-style sophistication, with touches like a copper bartop, dark moody walls, and a stained glass window inlaid into the ceiling. There’s even a picture of the modern Hercules himself (Arnie, obviously) above the bar. 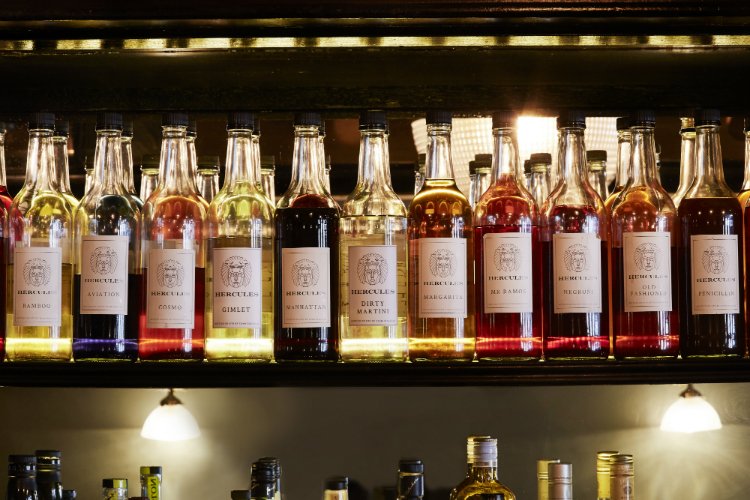 Because they’ve apparently taken this whole ‘cocktail pub’ thing really quite seriously, they’ve even installed a very small laboratory space somewhere in the back along with a few ageing casks, where they can tweak, tailor, and test their recipes (and, we assume, their sobriety).

It also gives them a space to blend & bottle the premixed classic cocktails which line the shelves behind the bar (there are a dozen or so, including Gimlets, Mahattans, Dirty Martinis, Old Fashioneds, etc.). They’ve even managed to bottle sparkling, pressurised cocktails. It means you can pop the cork on a whole bottle of Aperol Spritz, should you feel so inclined.

As for the cocktail list itself, they’ve got a fair lineup. You can expect among others:

There are bar snacks too, with cheese plates, charcuterie, and a stunning lineup of house pickles which includes parsnip, carrot, fennel, radish, golden beetroot, broccoli and finally morel mushroom. Of course, if you eat all the others…

Looking for a drinking spot? See the Best Bars in Soho