NOTE: Jackson & Rye has now closed in Soho, but you can still find branches in the City and Richmond.

2) The British – when Jackson & Rye first opened – did not do brunch.

However as more people in London began to realise that brunch permits you to start boozing at 11am – so long as you add a splash of orange juice to your drink, and eat eggs at the same time – it finally made sense for London to have its own sexy, dimly-lit contemporary NYC dining spot: a place that combines sleek, dark interiors with buttermilk pancakes, right in the heart of Soho. 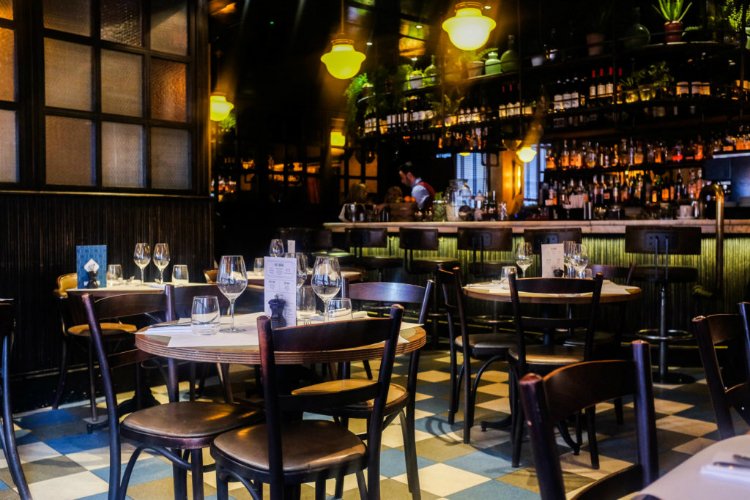 Now the main thing to know about this place is that while, yes, you can head along any day for a breakfast of hand drip coffee with smoked pulled pork and hash; buttermilk pancakes; forager’s eggs (scrambled with spinach and goat’s cheese); and while, yes, you can head along for a lazy weekend brunch of anything on the breakfast menu plus additional options like brisket croquettes; jumbo shrimp; griddled steak and eggs and truffled polenta hush puppies… you can also go there for dinner. Because that’s how NYC restaurants roll.

Supporting the menu of salads, burgers, buttermilk fried chicken and steaks from the grill (the NY striploin with béarnaise sauce, plus a slab of maple bacon and two fried eggs on the side being a particularly good option), is a cocktail menu (including bellinis for less than a fiver), plus a choice of desserts like Pecan Pie, the Melting Chocolate Sundae and Peanut Cup Butter martinis.

If it helps you to decide whether to have a dessert or not, just remember that it can’t be that bad a decision if nobody visits you from the future and tells you not to do it.

NOTE: Jackson & Rye has now closed in Soho, but you can still find branches in the City and Richmond.