Kylie & Madonna songs were easing their way up the charts. We had a controversy-courting female PM. And a Chinese restaurant named Kym’s had just opened… (Really? Well, the Gherkin is new.)

That restaurant was owned by the parents of Andrew Wong who would, three decades later, open his own celebrated dim sum restaurant in Victoria, named A. Wong (which retained its Michelin Star in this year’s list). And now, he’s finally cut the ribbon on his followup. This is Kym’s. 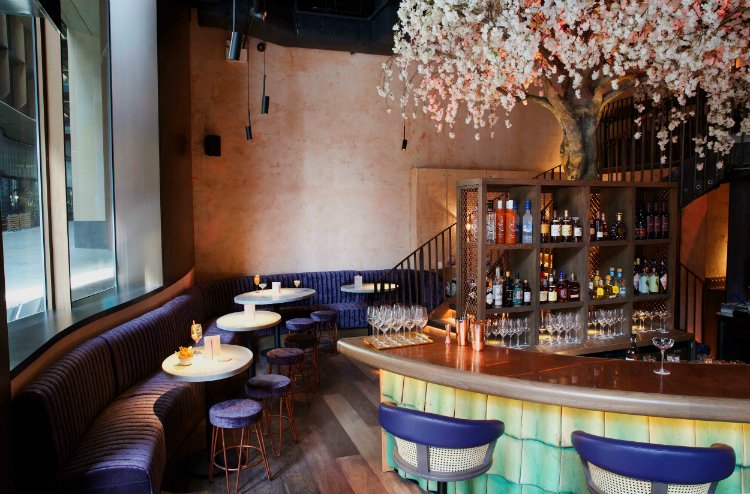 You’ll find it in the Bloomberg Arcade, where it’s in the excellent culinary company of places like Caravan, Koya City and Brigadiers. The first thing that’ll strike you about it is the sheer size; it houses an entire cherry blossom tree which spans both its floors, and which has a steel-top bar wrapped elegantly around its trunk – surrounding that bar are marble-topped tables, deep indigo banquette seats, and moodily lit blush pink walls.

As well as the space, the menu is bigger in its scope and ambition too, with a particular leaning towards traditionally roasted meats – the Cantonese pork belly, for instance, takes around 48hrs from start to finish to be salted, cured, air-dried, and finally scorched in a furnace-like oven in order to create a meltingly smooth meat surrounded by crispy, aromatic skin. Then, they serve it with a little honey mustard. 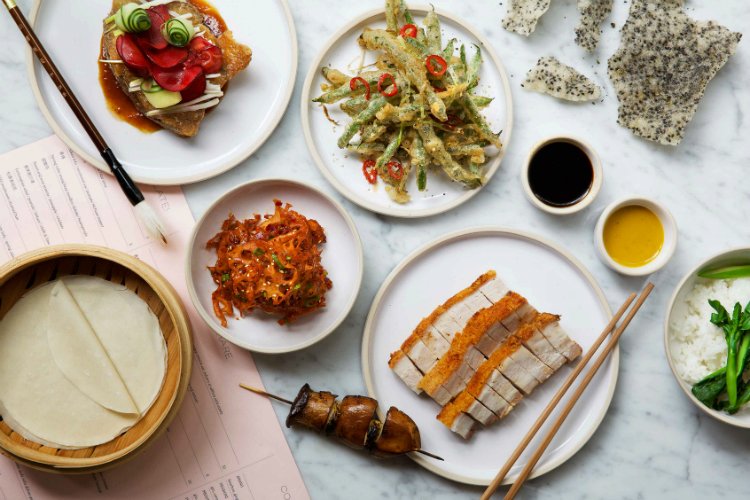 Other than that? You can expect some slow-poached chicken with ginger relish; steamed Dover sole with ‘double deluxe soy’; Xian City lamb with pomegranate & sesame; skewers of tiger prawns with sweet chilli & pineapple; and of course, steamed buns filled with the likes of wild mushrooms. And to finish, you can’t really go wrong with a little raspberry sorbet, white chocolate & Sichuan pepper.

Drinks-wise, the cocktails are very much Chinese-influenced (you can get a Sichuan Sour; a Plum Bellini; a Mandarin Collins; A Yuzu Negroni, etc.); the beers are very much London influenced (Kernel pale ale from Bermondsey; Beavertown’s Neck Oil IPA from Tottenham, etc.), and the wine leans very much towards the European mainland, with a few bottles from further afield to round it all out.

And after a few of those, following in anyone’s footsteps will be considerably harder.

Like being in the loop of the city’s newest restaurants? Check out our guide to the best recent openings