Sadly, Stem has now closed. However you can find lots of our other restaurant recommendations here.

Mark Jarvis laid his roots down in Anglo.

So it makes sense that his second restaurant is a Stem.

The space itself is two story affair set in a grand Mayfair townhouse (just a hop a skip and a jump from Oxford Circus), with a small open kitchen area, and pale grey walls lined by regally dark purple banquette seating, which creates an atmosphere of casual sophistication before you even sit down.

Jarvis has bussed in Sam Ashton-Booth (formerly of Restaurant Story) to act as head chef, and together they’ve put together a menu of seasonal British dishes much like they did at Anglo. After all, if it ain’t broke… 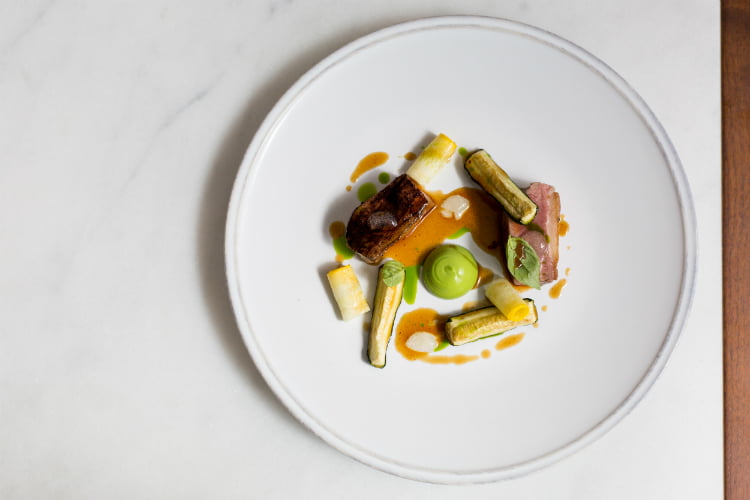 À la carte, your starter options extend from hand-dived raw scallops with celeriac & white chocolate (it works, somehow); to some rich & deeply earthy smoked chicken tortellini with leek hearts cooked in truffle butter; to vibrant new season asparagus with tarragon cream & lemon oil. Mains, meanwhile include a juicy roast saddle of lamb with dehydrated courgettes (which have been deliciously rehydrated with lamb broth) and basil; or some aged sirloin of beef with pickled shiso, cucumber and bone marrow.

Desserts lean slightly towards the more savoury end, with inventively combos like strawberry, tomato and rosemary; and black olive, almond and toasted brioche. And if you’re in the market for it, there are plenty of ‘La Fromagerie’ cheeses to be had, with green tomato chutney and yeast crackers to back them up.

Looks like Mr Jarvis is going to make his mark.

Like the sound of this place? Check out Anglo…