Now, there’s no need to panic.

But there seems to be a very minor Martian invasion underway.

They’ve taken over a very large building in Aldgate (22k square feet, in fact) and filled several floors of it with a fully immersive recreation of The War of the Worlds, aided by the people at DotDotDot, who have experience in such things having been responsible for the VR-laced show Somnai.

The entrance is a steampunk bar, which is impressive in the big things it does – like the gigantic, car-sized Martian tripod coming through the ceiling with shimmering eyes – and in the small things, like the fact that the paintings on the wall actually change over time through the subtle use of projection. 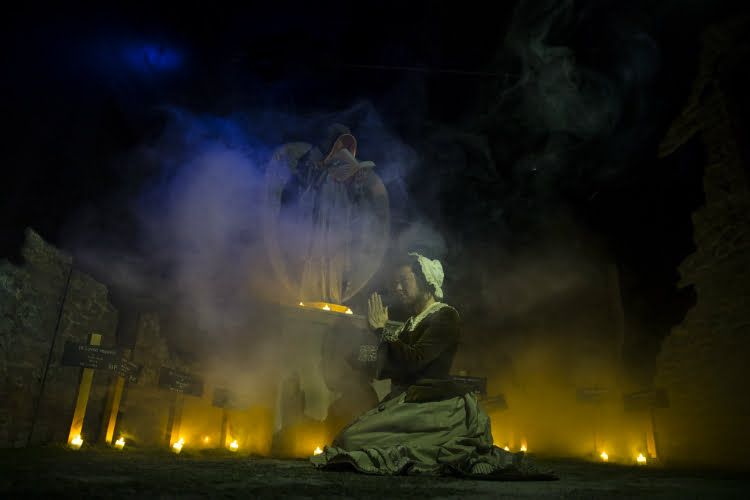 After a light refresher to help stiffen your nerves, you’ll be ushered down a dark hallway, thick with atmosphere, that takes you to a bombed-out, rubble-strewn theatre. Here, in the wreckage of the invasion, you’ll be introduced to our stiff-upper-lipped main character who’ll appear as a hologram on the dilapidated stage. After a little background, and some of Jeff Wayne’s iconic score, you’ll be invited (by the hologram) to experience the invasion first-hand, as it actually happened.

From here, you’ll be whisked from thoroughly detailed space to thoroughly detailed space by characters from the novel, and experience some extremely impressive live immersive effects. You’ll be at the eerie crash site of the first cylinder. You’ll see people set ablaze by heat rays before your very eyes. You’ll be trapped in darkened house as a whiplike Martian tentacle stalks the room. You’ll slide down tunnels, clamber through windows, and crawl through holes blasted in brick walls. There’s even a segment featuring small, 4-person miniature planetariums in which you and your companions are witness to the MC Escher-like fantasy of a lunatic projected onto a large dome a few feet from your face, basically encompassing your entire field of view. 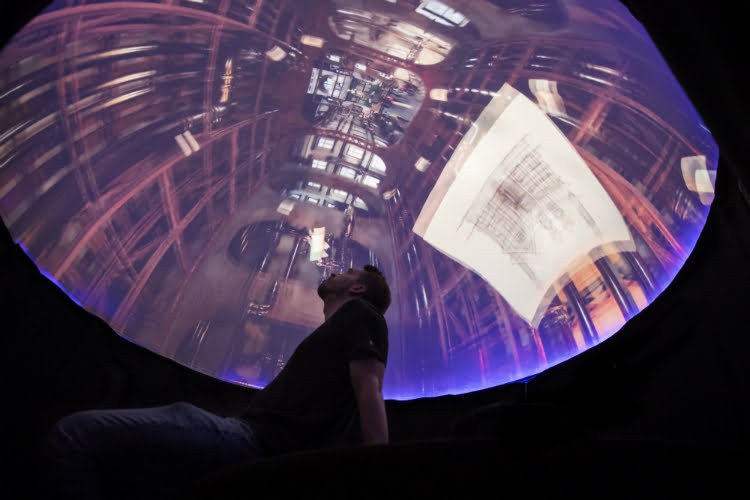 There are also several segments featuring 3D virtual reality goggles and some of the sequences are truly astounding, giving you a sense of scale that practical effects simply can’t achieve. After all, it’s tough to fit a 200ft alien tripod into a single room. And then have it pick you up.

It all takes about 2-ish hours in total, with a refreshing stop at a Martian-invaded pub about half-way through, boasting a large S-shaped table that’s gradually covered in red, alien weed as you drink. The whole narrative follows the book quite faithfully, and Jeff Wayne’s now-iconic music features heavily throughout. Of course whether you’ve heard it or not…

NOTE: Jeff Wayne’s The War of the Worlds: The Immersive Experience is set to run pretty much permanently. You can find out more, and make a booking (adult tickets start at £62.50) at their website right HERE.

Like unusual events? See what else is on in London this month

A New Immersive Theatre Venue Opens In West London This Year And they’ve got quite the knees-up in store….

Secret Cinema Presents Dirty Dancing You’ll have the time of your life….

The Candlelight Club A candlelit (duh) drinking den in a secret London location, with live music, vintage DJs and champagne.