At this precise moment in time, you may not know him from Adam, but we’re going to say there’s about an 89% chance you’re going to end up at his gaff on Friday night.

You’ll stroll up to an innocuous building on the high street that looks like any other cutesy bistro, with curved bay windows, net curtains and a fairly anonymous black awning. But venture inside, and you’ll step into a bona fide time capsule, with wooden tongue-and-groove walls crammed with autographed pictures of ’70s icons, diner-style tables jutting out from the walls and a soundtrack to make Wes Anderson proud. Here on the ground floor is Bobby’s dining room and kitchen, where you can stock up on all-American comfort food, including a hamburger with deep-fried pickles, sloppy banana pie, and pizzas with toppings ranging from the classic, to the chicken tikka masala. Many of which you can also get with bottomless cocktails for brunch. 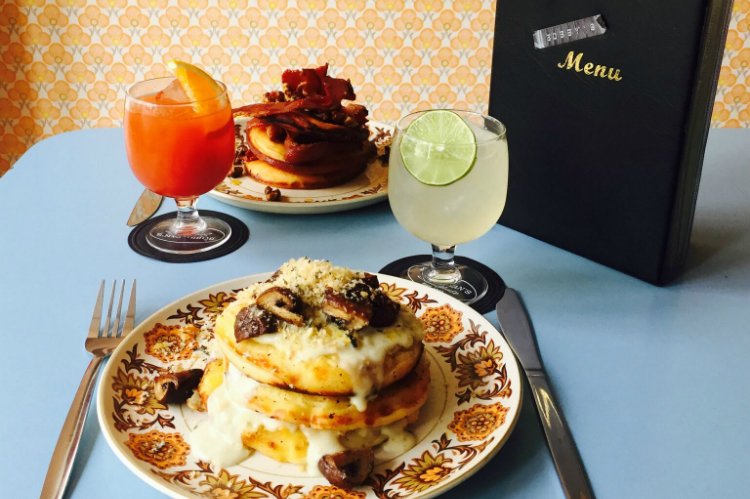 Head downstairs into the basement, however, and you’ll find yourself in Bobby’s party pad: imagine Studio 54-style antics, in your nan’s living room… only not as disturbing.

On your right, there’s the conservatory-themed lounge, with street light pouring through the glass bricks on the pavement above, suspended wicker egg chairs and retro board games that, at the time of writing at least, still have all the pieces. To your left, there’s the living room – carpeted and wallpapered within an inch of its life – and bang in the centre, the bar, where the barkeeps will pour you slushie cocktails from a machine plastered with vintage football stickers, or knock up a lil something with tequila, rum or their house falernum.

Providing ample evidence that sometimes you actually should talk to strangers.

NOTE: Bobby Fitzpatrick is now open daily from 5pm on weekdays and 12pm on weekends until late. You can find out more, and book a table, HERE.

Like retro stuff? Head a little further back with The Candlelight Club…