Tucked between the old Truman Brewery buildings in Brick Lane is an alleyway where, in days of yore, horse-drawn carts (or ‘drays’) loaded up with beer barrels would trundle out to make their deliveries to East London’s pubs. Centuries on, it’s kept the name Dray Walk.

To be fair, ‘Al Fresco Terrace Filled With Music, Booze and Pop Up Markets Walk’ doesn’t have quite the same ring to it.

Nowadays it’s lined by dozens of shops like Rough Trade and Slam City Skates; it’s home to the Brick Lane Taproom; and it’s a stone’s throw from Brick Lane’s weekend markets teeming with roadside cooking, vinyl stalls and vintage threads. Head down there this summer and you’ll uncover an al fresco playground filled with picnic tables and benches designed for getting big groups together, as well as… 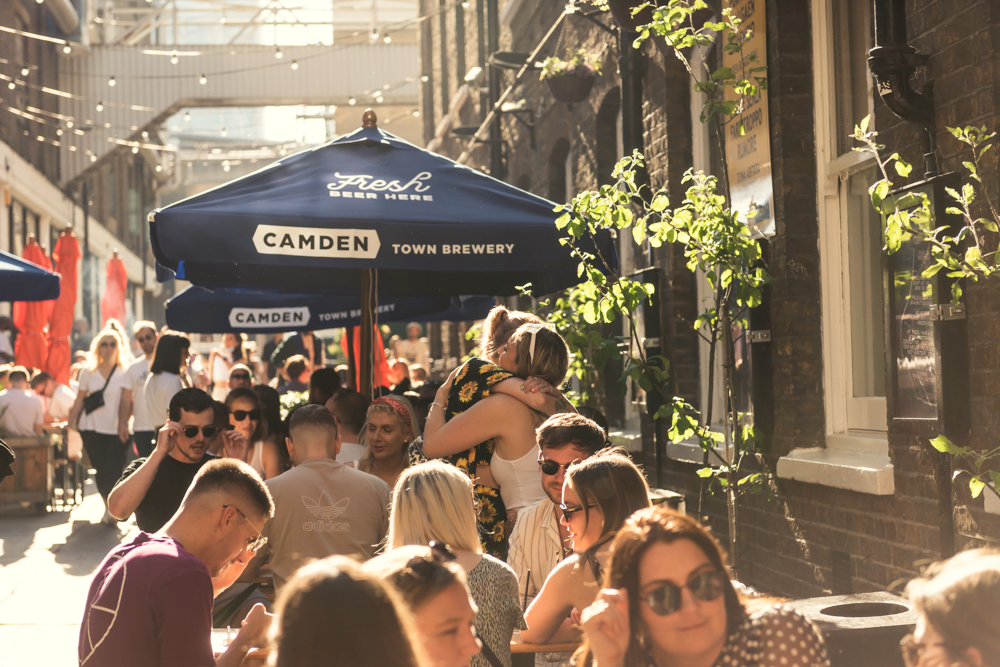 1) FOOD – courtesy of street food market hotshots Only Jerkin’ (with their city-renowned, triple-dipped, ginger beer-battered fried chicken and jerk-seasoned fries) and rotating residencies in the taproom from the likes of What Willy and Scottish duo Rex Meek + Auld Hag;

2) DRINKS – behind the bar at Cafe 1001 you’ll see tenders stirring Mojitos and Mezcal Coffee Negronis, or take your pick from the evolving line-up of draught craft brews at the Brick Lane Taproom;

3) MUSIC – overseen by a rotating line-up of guest DJs and collectives every weekend, from the Rhythm Sisters (championing female and non-binary vinyl spinners) to The London Disco Society;

4) AND MUCH, MUCH MORE – which here specifically means impromptu events including live art; pop-up shops and markets; talks with invited speakers on a variety of topics; and record rummage sales.

As the sun sets, the action will migrate to Cafe 1001’s loft space, where DJs will keep playing until the wee hours…

…and there’s a very real possibility of raising the roof.

NOTE: Dray Walk is open every weekend throughout the summer, 12-10pm. No need to book anything, just turn up – you can find out more HERE.

Want to make the most of the sun? Check out our pick of the best London restaurants with outdoor seating.