London has been suffering from a lack of retro-style Korean pubs for the last, oh, two thousand-ish years apparently.

Because Hongdae Pocha has opened in Soho, and they claim to be the capital’s first, ever. It’s styled after the pochas (that’s pubs to you and me) of the North-East Asian peninsula in the ’70s & ’80s, and if it’s anything to go by, then they were a hell of a lot of fun. It seems to be the one place in the world where disco balls, corrugated steel roofs, indoor BBQs, K-pop, and vintage advertising all comfortably intersect to create a whole far greater than the sum of their parts.

Enter, and after soaking up the pumping music and the bubbling atmosphere, you’ll see a sort of indoor alleyway lit by daylight from the skylight above, with booths covered in twinkling lights, steel roofs, and plenty of graffiti. Encouragingly most of that graffiti is in Korean, and it’s actively advocated by the staff – you’ll find your own pen clipped to your menu. 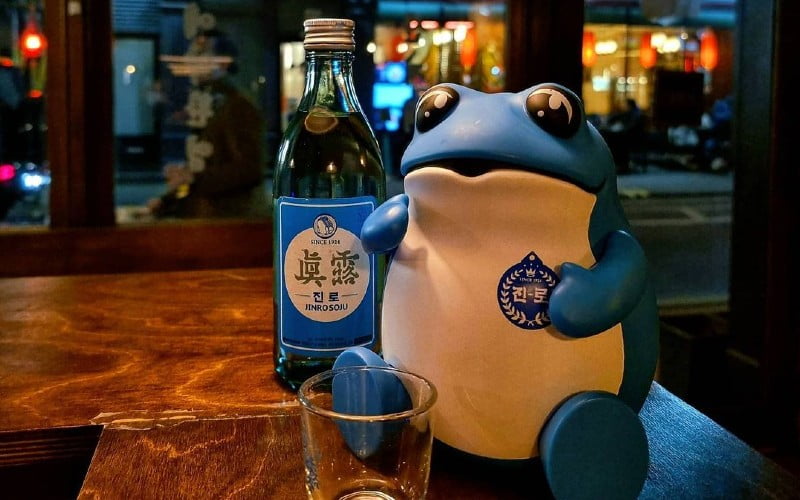 Speaking of menus, this one is packed with Korean classics, specifically the kind you’d find in a ’70s & ’80s pocha (we assume). Some of it’s challenging, some of it’s comforting, and some of it’s spicy enough to make you hallucinate. There’s everything from good ol’ fried chicken with yangyum sauce or garlic soy, to a plate of stir-fried whelks in a punchy chilli sauce, to a ribeye-loaded hot pot laid on your table with its own gas-burner.

There are plenty of drinks too, with gallons of soju, Korean beer, and cocktails. So popular is soju in Korea, in fact, that they have a whole variety of soju & beer pairings available, like the Te-sla, in which you pour Terra beer into a glass of Cham Eseul soju. It’s genuinely good, and you’ll wonder how long until good ol’ British pubs catch on. Then there are cocktails, which range from highballs, to a number with contains en entire iced lolly dipped into it. The idea is for it to cool the drink and gradually flavour it at the same time. The lolly, by the way, is a Korean classic called a Screw Bar.

It makes a neat twist on the twist.

NOTE: Hongdae Pocha is open now. You can find out more, and make a booking at their website right HERE.

Like the vibe of this place? Here are the best Korean restaurants in London…