And frankly, it might just be one of the city’s best new bars full stop.

It’s a fun party spot with an absolutely stunning music set up. You’ll find it in Peckham, around the back of the Bussey Building (taking the spot that used to be Mike’s pizza), and it’s the work of a pair of local musicians, Nathanael Williams & Bradley Zero. And yes, Bradley Zero is his real, given name. He occasionally posts pictures of his passport to prove it.

The venue they’ve put together is a huge, brick-walled church of music, with a double-height ceiling and a vaulted roof stretching up to the heavens. It’s got scattered chairs, sofas, and a long bar along the side, as well as a terrace spinning out at the front. But sitting in the place of the altar at the front of the venue is a giant wall of vinyl, stacked with 12″ records almost to the rafters (apparently it’s literally Bradley’s entire music collection). 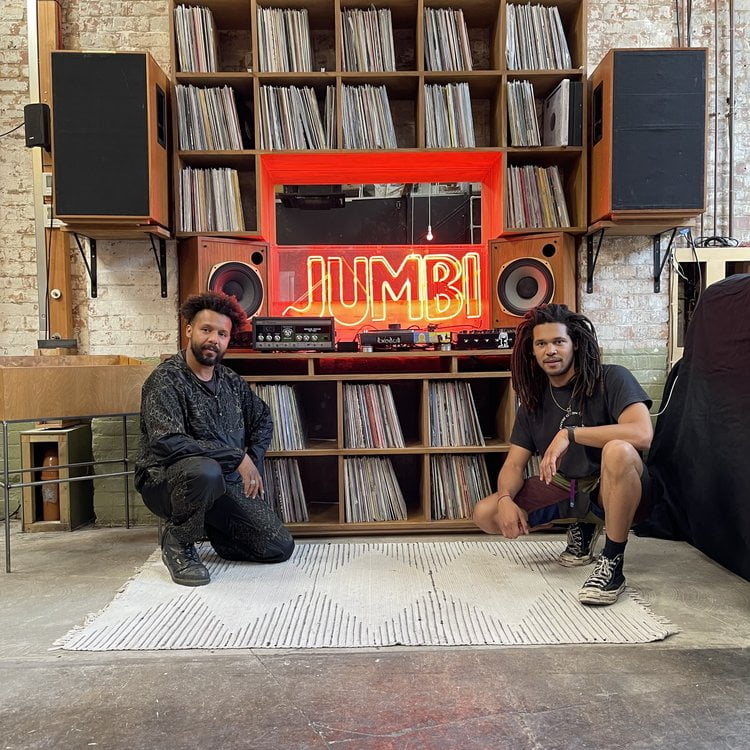 The idea is, on the average night, to promote deep listening to fantastic music. Punters are frequently invited to browse the vinyl library and pick something to hit the deck – yes, it’s a single turntable setup – which is hooked up to a beautiful collection of vintage amps & speakers. For those who understand what the following means, they’re BBC-certified Rogers LS 5/8 speakers, and Quad 405’s amps. Which, if you didn’t understand that, it basically means they’re f**king amazing.

As for that bar? Well, both Nathanael & Bradley have decided to try and turn the place into a celebration of their mutual Afro-Caribbean heritage, which means that you can expect a whole lot of rum cocktails & punches, as well as food from St Lucian street outfit Bakes’ N Stuffingz – they’re supplying bakes loaded with jerk chicken, salted cod, pulled jackfruit, and more to go with Johnny cakes, fried dumplings, and more.

And if you’re still wondering just what a jumbi is, it’s an apparition said to have survived the journey from Africa to the new world. In different dialects, it’s variously known as a nfumbi, a duppy, and a zombie – and apparently it’s partial to rum.

NOTE: Jumbi is open now on soft launch for the month of July, opening Wednesday-Sun, then launching with a full program in August. There are no bookings. You can find out more at their website right here.