And sadly, entirely impossible to visit. Until now.

Little Nan’s bar – set up by grandson Tristan in homage to his EastEnders-loving nana – brings all that is great and good about Walford into Deptford, alongside all manner of kitschy bric-a-brac, British tat and 90s memorabilia.

Set under the railway arches of Deptford, Little Nan’s Bar is a magpie’s nest of fairylights, plastic houseplants, chintzy furnishings, bunting, leopard print, and tea towels with the Queen on. It’s as if somebody hit a piñata of ’90s collectibles and showered the contents all over the bar. There’s nowhere quite like it in London. 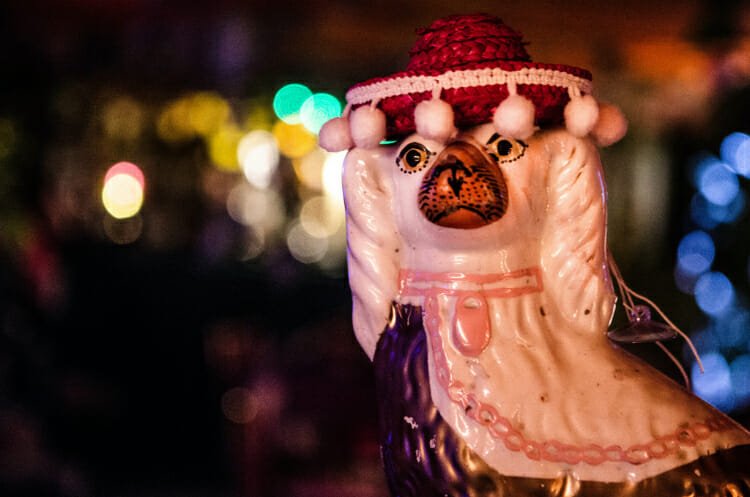 Peruse the menus (written in felt tip, and dotted with boy band stickers out of a ’97 Smash Hits magazine) and you’ll find that the booze and bar snacks are suitably retro too. Cocktails – each named after a prominent figure, like the King Kriss Akabusi (with scotch, lemon juice, orange and prosecco) and the Sir Lionel Richie (two types of rum, vodka, strawberry, coconut cream and pineapple juice) – are either peculiar colours, excessively sugary, or both, and are served by the teapot. Naturally, you can also get beer in a teapot, wine not-in-a-teapot, and Werther’s Original vodka shots.

Saving you from complete glucose and booze-fuelled hysteria is the menu of retro party food, from Morrissey’s vegan bean burger to fish finger sarnies, pigs in blankets, chip butties and cheesy snax. Head in a little earlier in the day, in fact, and Little Nan’ll treat you to afternoon tea, with sandwiches, scones, vicky sponge, boozy slushies and a soundtrack of 90s chart hits.

If you want a little Ice, Ice, Baby.

Like quirky drinking dens? Check out our guide to unusual bars in London