‘Omeara’ already has a pretty rich musical heritage, being the surname of Jo out of S Club 7.

But it’s about to get even better.

Because it’s also a pulsating, multi-disciplinary cultural hub that plays host to live music, comedy shows, and indie club nights in a live room for 320 people; regular exhibitions in the additional gallery space; and a terrace overlooking Southwark Cathedral and the Shard; all housed within an interconnecting set of railway arches in London Bridge. Specifically, off O’Meara Street, looking out onto the bustling Flat Iron Square. 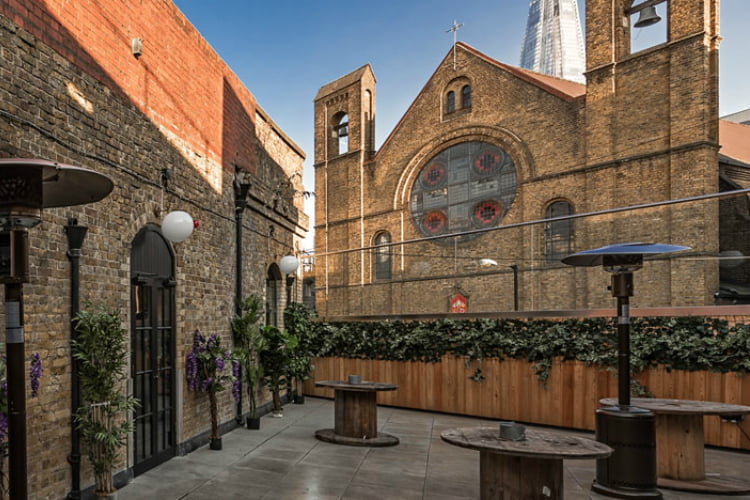 Overseen by Mumford & Sons pianist and record producer Ben Lovett, the programme at Omeara is deeply varied – you can catch up and coming artists playing everything from acoustic guitar to gypsy folk; big names and revivals from the likes of Bananarama and The Pretenders; DJ sets and club nights (headed up by Omeara’s resident DJ, Trevor Nelson); spoken word and poetry nights; and the occasional wild card like One Track Minds, which describes itself as a cross between Desert Island Discs and a TED talk.

With peeling paint and vintage lighting, the place sports its own brand of derelict-Victorian-music-hall-meets-Crystal-Maze-Aztec-Zone chic, with one of the archways given over to a tequila-heavy cocktail bar. This is the Omeara Cantina, serving up Central American-inspired drinks (Palomas, Jalisco Sours and juniper-infused tequila and tonics) and British food, courtesy of their Flat Iron Square neighbours, Lupins.

And something tells us you’re going to Lovett.

NOTE: Omeara is open daily from 5pm-midnight (2am Thurs, 3am Fri & Sat). You can find out what’s on, and book tickets, right HERE.

Looking for a bite to eat first? Check out the best restaurants in London Bridge

A Theremin Concert. In A Church. With Cocktails. After their sell-out debut, they’re finally back.

The Candlelit Concerts Acoustic musicians in a bombed-out church.

A Brass Rave. With Neon Dancers. The world’s first, no doubt.

HowTheLightGetsIn 2019 It’s up on a hill, but it’s still pretty deep.