During the mid-80s, The Roxanne Wars rocked the NY hip-hop scene.

Two singers, Roxanne Shanté and The Real Roxanne, duked it out across dozens of diss tracks and call-outs. Half the bands in the NY scene released their own Roxanne record and, according to Wikipedia, it generated “perhaps the most answer records in history”. And its influence still resonates today …mainly in the form of an all-new ‘hip-hop speakeasy’ from the crew at Dirty Bones.

The place is hidden on an unassuming side-street around the corner from Dirty Bones Shoreditch. The black door is set into a heavily graffitied wall, with a small neon sign that just reads ‘bar’ hanging above it. Walk inside, and you’ll be led up a staircase whose walls are plastered from floor-to-ceiling with bill posters of hip-hop royalty. 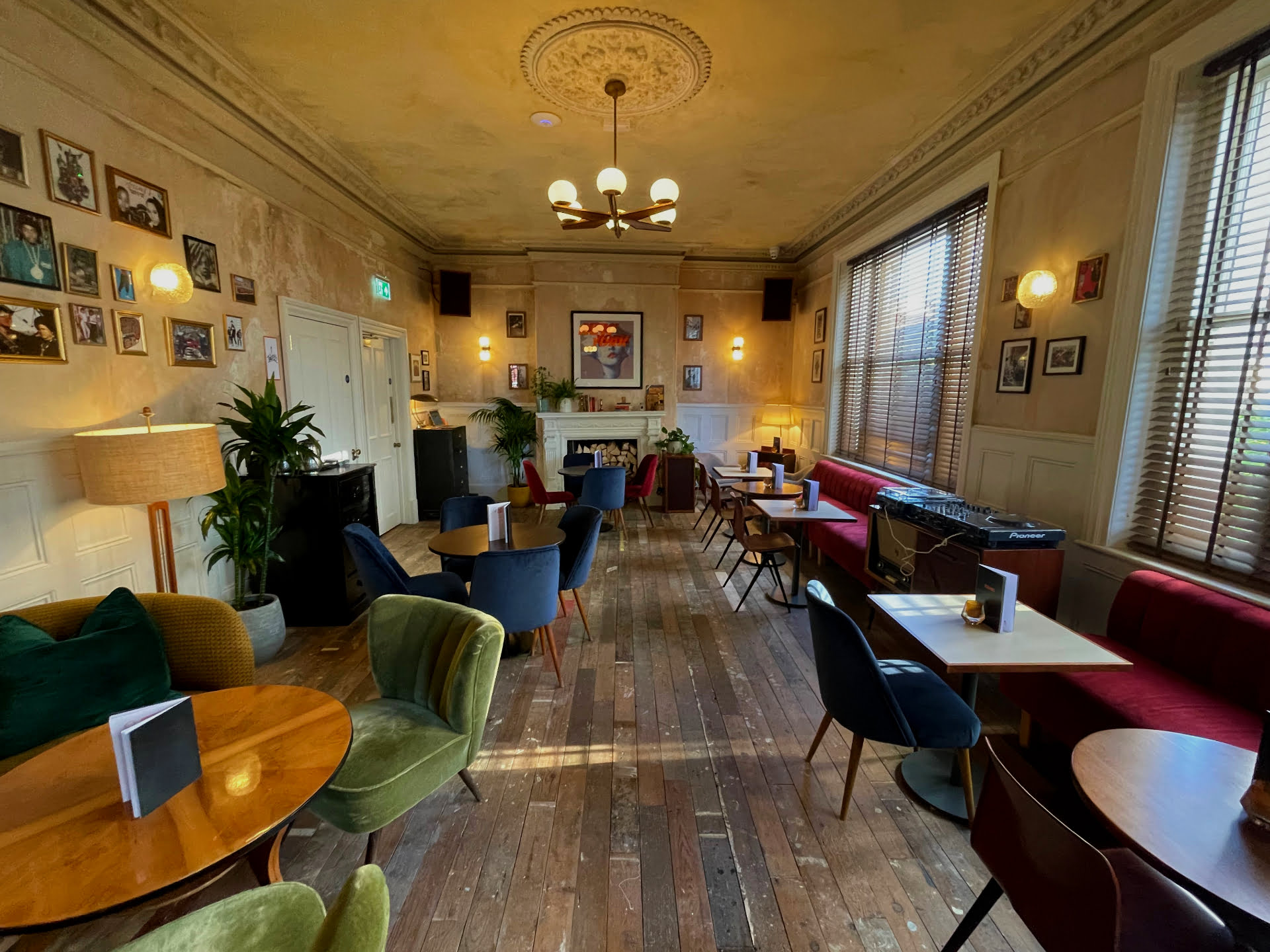 The bar itself feels like the vast living room of an old manor house which has had its walls stripped back to the plaster, its carpets ripped up to reveal the bare floorboards below, and its painted ceilings peeled to expose the handsomely crafted plaster mouldings. Then, on top of that canvas, it’s had dozens upon dozens of photos from New York’s hip-hop heyday of the ’80s slapped on, as well as a some colourful modern furnishes, and old-fashioned wooden-boxed speakers in every corner, high and low.

And what’s coming out of those speakers is one of the best things about the place – when there isn’t a live DJ, there’s a superbly well curated playlist of old school hip-hop with a heavy lean towards the genre’s female pioneers. You’ll be Shazam-ing tracks from the moment you get there to the moment you leave. The music here isn’t just an attractive veneer to an otherwise ordinary cocktail bar, it feels very much like part of the place’s core identity. Of course, the ‘speakeasy’ part of this hip-hop speakeasy involves a great deal of booze, particularly cocktails. Everything that’s not a fresh ingredient is pre-mixed & chilled, making the drinks considerably quicker to assemble, and no less delicious for it. You’ll find easy drinking aperitifs like the Sha-Rock Spritz (“It’s what an Aperol Spritz wishes it was” the bar’s mixologist tells us) whose house-made grapefruit syrup is rounded out with elderflower & peach liqueurs, as well as powerful highballs like the Rum ‘N’ Shisho, whose overproof rum is paired up with green cardamom essence, shiso cordial, and a dash of absinthe. There is food (a hot dog, some soft pretzels, etc.) but it’s strictly bar food, and although it’s perfectly nice this definitely isn’t a place for dinner. But no matter, you’re in Shoreditch, and only a hundred yards away from places like Smoking Goat, BAO Noodle Shop, and Brat, etc. Oh, and let’s not forget Dirty Bones, either.

Apparently, the Roxanne Wars finally ended with the release of the final track, after close to 100 others before it. It was called ‘No More Roxanne (Please)’.

But thanks to this place, we’re not sure we agree with that sentiment.

NOTE: Roxanne is open now, Tues-Sat. You can  find out more, and make a booking from their Insta right here.

Like hidden bars? Then check these puppies out – the best hidden bars in London

➋ A Legendary Hidden Speakeasy Piano Bar Is Returning Everyone from Hendrix to The Stones played here, and now you’re invited to the relaunch party….