Thomas Buxton was the kind of guy you’d want to name a really great venue after.

And not because he helped abolish slavery throughout the British Empire. Or that he started the movement that would eventually ban capital punishment. Or even that he founded the RSPCA. No, because he was a brewer.

Okay maybe a little about those other things too.

Either way, back just over 200 years ago, he owned the Truman Brewery on Brick Lane, a stone’s throw away from what is now The Buxton. It comes to us from the team behind Culpeper (also a mere rock toss down the street), and it’s got quite a bit going on – it’s part pub and part restaurant, with some hotel rooms upstairs. Oh, and it’s all made from Portland Stone, the same stuff that St. Paul’s, Buckingham Palace, and the UN Building are all made from.

Let’s start with the pub, because it’s the first thing you’ll see coming into the space on the ground floor. In contrast to its sister spot’s slightly rough-around-the-edges feel, this space is clean and even slightly refined (you know, for a pub). The wood is all varnished to a rich chestnut brown, the fittings are made from gleaming brass, and the bar is topped with a glossy red marble. 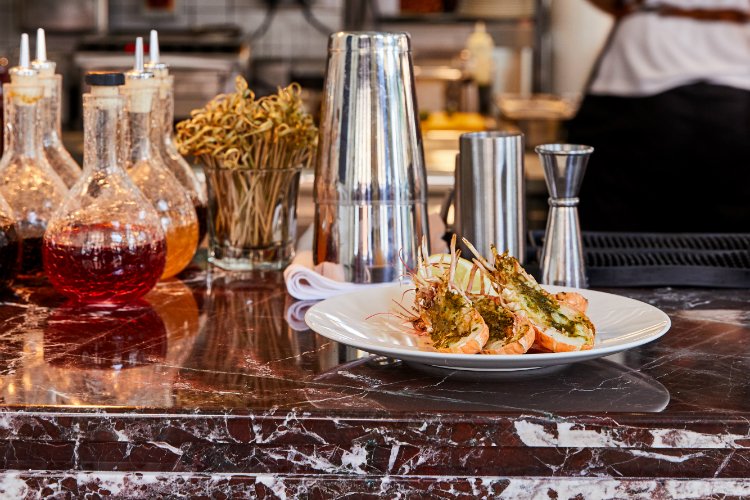 There are crafts on the taps, natural wines in the bottles, and cocktails in the shakers including a zestily bright Ivy Gimlet Royale (which adds prosecco to its vodka, elderflower, and lime) and a smooth Sherry Cobbler with Madeira, Amontillado, Crème de Pêche, chai tea syrup, and lemon.

This also doubles as the restaurant space, and the menu changes regularly – in fact, they don’t even place orders for particular fish, just adapt the menu according to what their Dorset-based fisherman has caught that day. You can expect modern British & European dishes like chilled pea soup with red sorrel & hazelnuts; Dexter beef with celeriac remoulade, garlic & honey puree; and a Yorkshire rhubarb and custard tart with clotted cream.

Heading upstairs you’ll find the 15 rooms. They’re all filled with smart details, high framed beds, and come in at an extremely reasonable £100 flat rate across the week/year.

Of which Thomas Buxton would have approved.

NOTE: The Buxton is open daily from 11am-11.30pm (10.30pm Sundays). You can check out their website and make a booking right HERE.

Want to see their other space? Head down to The Culpeper.