And, with places like The Corin around, it’s not entirely unjustified. Because apart from the fact that this South London bar has its own rooftop, it also has frequent live musicians who literally do blow their own trumpets.

It comes to us from the team behind a restaurant called Rozu (if you’ve been to Birmingham in the past couple of years, you’ll have noticed that it’s the darling of the brunch & cocktail scene there), and you’ll find it slap bang on the Tooting Broadway intersection, only a couple of floors up.

Inside, you’ll find a relaxed space filled with plenty of foliage and quirky touches – the stairwell coming up into the bar features a wall of greenery with a giraffe’s head sticking out, the ceiling is cut though with a pair of bright orange girders to help keep it all aloft, and the wall is covered in playfully abstract photography & artwork. The other wall, however, is entirely made from floor-to-ceiling glass so as to let in both vast amounts of natural light, and the views onto that roof deck with its sofas, planters, and throw rugs. 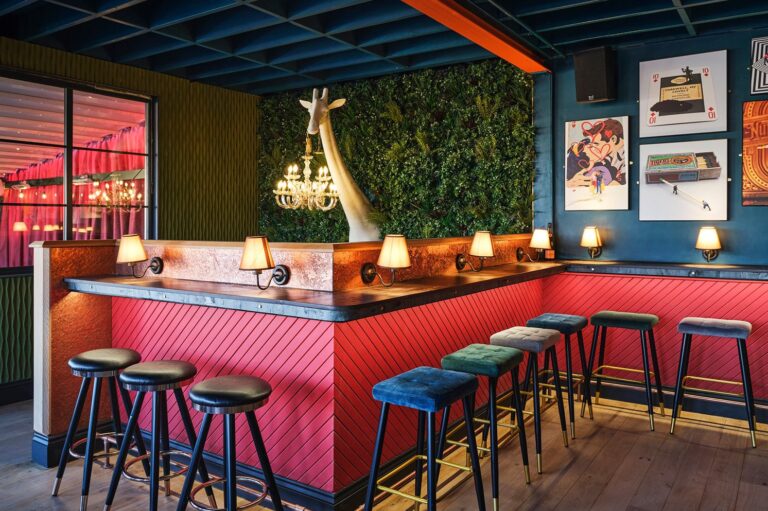 The drinks also keep a quirky edge to them with numbers like the ‘Kale Me Now’ bringing actual kale-infused gin & lime cordial to the party, or the ‘I’m Shellfish’, which features some East London rum and something called oyster honey syrup. Of course, if you’re not feeling quite that adventurous, then you can always score one of their more sedate drinks (the Pour Tequila involves grapefruit, chamomile syrup and, well, tequila) or a simple classic cocktail.

The food menu has been whisked directly from Rozu (if it ain’t broke…) which means you can expect a pan-Asian lineup of chicken gyoza, prawn tempura, duck spring rolls, katsu curries, and Chinese-spiced black pepper fillet steaks. It’s a small selection, but certainly does the job. And there’s more to be had at brunch, too.

And then there’s the live music – it’s currently playing every Thursday & Sunday in the form of laid-back jazz, although if you don’t go on a night with live musicians, there’ll more than likely be a DJ on the decks instead.

Oh, and that terrace? It’s got a retractable roof.

NOTE: The Corin is open now, seven days a week. You can find out more at their website right HERE.

Like drinking up? Check out the rest of London’s best rooftop bars…