The London Gin Club has some brand new owners.

Don’t worry, they’re staying true to the spirit of the place.

With a long and illustrious history including 18th century taverns and a brief stint as the Turko Bulgarian Sour Milk Company in 1910, the place has been a family business since Ambrose Forte opened his Star Café in 1933. Nearly a century later, his granddaughter Julia launched The London Gin Club with Vicky Fisher. And it did a roaring trade until 2019, when Crossrail builders – much to everyone’s surprise – found themselves breaking into their basement. Now, a few years on, the club’s been lovingly restored with a new duo at the helm: Charlie Gilkes and Duncan Stirling, who already run the exceptional Cahoots and Mr. Fogg’s bars across the city.

You’ll find it on a corner of Soho, emanating a cosy, welcoming glow thanks to the dozens of candles and chintzy lamps dotted around the place. It’s the kind of place you’d just love to stumble across on a rainy Autumn afternoon, that’ll keep you in there a good few hours longer than you meant to stay. Hogarth probably would have made a print about it. 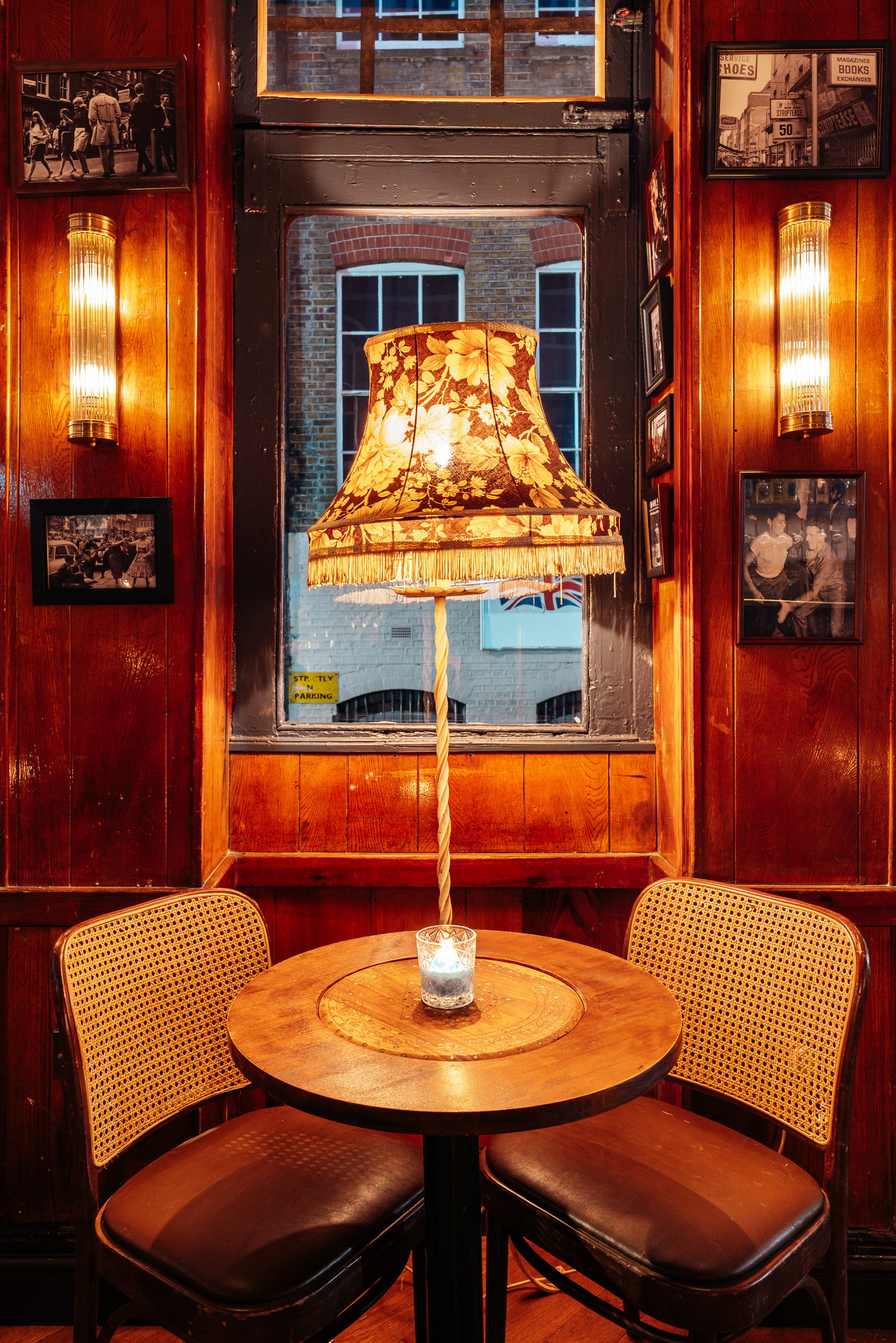 As longstanding patrons of the bar, the pair have kept most things as they were – so you’ll still find the same time-worn wood-panelled walls, covered with eclectic décor – but where there were once antique tin bar signs, you’ll now spot black and white photographs, old maps and vintage curios.

And of course, the emphasis is still firmly on the discovery, and enjoyment of, gin.

Stacked up on the illuminated shelves is an impressive library of over 100 gins, ranging from the well-known to rarer, hand-picked batch numbers from independent distilleries. You’ll be able to sample them via a list of well-crafted G&Ts (paired with the optimal tonic), which includes a giant sharing G&T served from your own glass keg, combining gin with rhubarb tonic water, herbal liqueur and Earl Grey cordial.

They’ve also kept the Club’s tried-and-tested concept of tasting flights: changing on a monthly basis, these’ll give you the chance to discover new bottles, served alongside all the necessary garnishes, tonics, and notes to tell you what flavours you should be looking out for. To proffer our humble advice, we’d wait until these get shuffled up a little before diving in, as the current flights mostly cover big name brands that you’ve likely encountered before.

In the meantime, you can acquaint yourself with the fine list of cocktails, ranging from classics to signature serves. The Spanky Panky updates the Hanky Panky with cherry brine and coffee mist; while the Garden Square marries kaffir lime-infused gin with lavender syrup, jasmine liqueur and cloudy apple juice. And for anyone who completely misread the sign on the way in, there’s plenty of other drinks on offer, from draught beers to Champagne.

But, alas: no sour milk.

NOTE: The London Gin Club is open Wednesday – Sunday. You can find out more, and make a booking, HERE.

Like specialist bars? Then you may want to swing by Milroy’s…