Unlike Game of Thrones, this article has a mere 1,170 characters…

…but they’re enough to tell you about the new immersive supper club coming to the Vaults this April, right after VAULT Festival leaves.

It’s called Dinner is Coming, and it’s themed after everyone’s favourite Medieval murder-fest. With tongue firmly in cheek and knife firmly in back, it’ll tell the story of the marriage between the heir to the Several Kingdoms, Jaffrey Bearathon, and Margarine, the beautiful daughter of the noble Trywell Family – and you’re invited to the wedding feast. 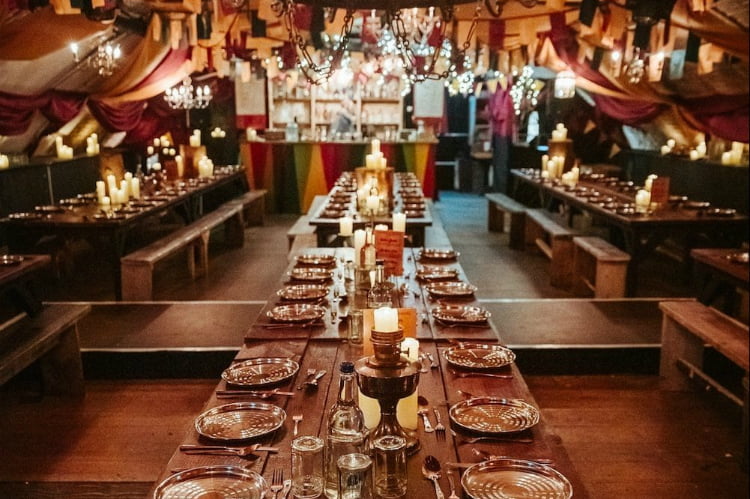 As the evening progresses, heads will roll and blood will be spilled (apparently the night will include “nudity, violence, strong language and dragons”, FYI) and you’ll be forced to choose a royal house to pledge your allegiance to, praying that they end up on the throne.

Dressing appropriately is strongly encouraged, and they’re asking people to arrive either as “a richly decorated Lord or Lady from Easteros, an armoured warrior, or a rag-wearing peasant”. The whole thing is catered by the team at PopCo, who’ve worked on all the Vault’s previous immersive experiences, but the menu is currently under wraps. Hopefully it’s not going to be the Ned Stark special though…

…a couple of cold chops.

NOTE: Dinner is Coming takes place at the Vaults until June 2nd. Tickets cost £30-£35 and are available HERE.

A Life-Affirming Evening of Music & Storytelling In a crumbling, fairy-lit music hall.

The Candlelight Club's Back With A Bang A candlelit (duh) drinking den in a secret London location, with live music, vintage DJs and champagne.