Museum of the Moon | Lunar landing at the Natural History Museum

Museum of the Moon

Take one small step into the Natural History Museum this year…

…and you’ll find a giant, illuminated, perfectly replicated moon hanging in one of its halls.

It’s a 6-metre wide artwork by Luke Jerram, and it has landed in its new London home just in time to celebrate the 50th anniversary of the (actual) moon landings. It’s free to take a look, and it features meticulously detailed NASA imagery of the lunar surface, as well as ambient moonlight and an “evolving soundscape” to go with it all. 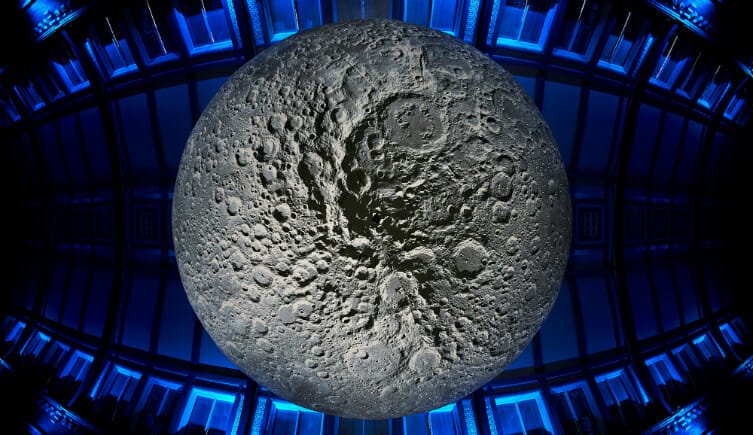 It’ll be there for the anniversary of the Apollo 11 moon landing in 1969, on 16th July and they’re also hosting a couple of events beneath it, including cheese and wine tastings, yoga, and DJ sets. And to top it all? There’s going to be a 15 minute interactive performance called Companion: Moon, in which you can take part, or simple observe as “multiple art forms combine” thanks to theatre company Coney.

NOTE: Museum of the Moon is free, and will be on display until 5th January 2020. You can find out more, and buy tickets to the special events at their website right HERE.

Want to know what else is going on at the Natural History Museum? Then head right here…

Museum of the Moon

A sprawling, immersive exhibition dedicated to electronic music and culture...

Things To Do Ended Covent Garden

An architectural feast at Somerset House...

An exhibition about insomnia, surveillance, and 24/7 living...

A Silent Disco On Tower Bridge & Lectures Beneath The Moon

Get ready for a weekend of late-opening museums & galleries…...