The Bob Marley One Love Experience

If Bob Marley were still alive today he’d have just celebrated his 77th birthday, and the One Love Experience probably wouldn’t exist.

And it is an experience – not an exhibition – curated in large part by the Marley family, whose aim is to shed a little light on the man’s personality in a way that, if he were still playing gigs, giving interviews, and pouring his soul out on social media, wouldn’t be necessary. So what they’ve created here is, dare we say it, an immersive art show that actually does a good job of immersing you into his world. The cavernous spaces in the Saachi Gallery have been filled with bright Jamaican colours & images, the walls have been painted with inspiring quotes from Marley himself, the upbeat, toe-tappingly catchy melodies of Marley’s music permeate every room, and you can’t help but leave with a feeling of unfettered optimism. Which is probably what Bob Marley would have wanted.

You’ll come in through the gallery’s grand, pillared entryway, and be whisked along corridors to the opening Music Room. Dominated by a gigantic recreation of his green & gold Legend LP, it’s surrounded by the kind of memorabilia that you’d be looking for in a slightly drier exhibition – encased behind glass are original lyrics, platinum records, and the very guitar that Marley used for songwriting. 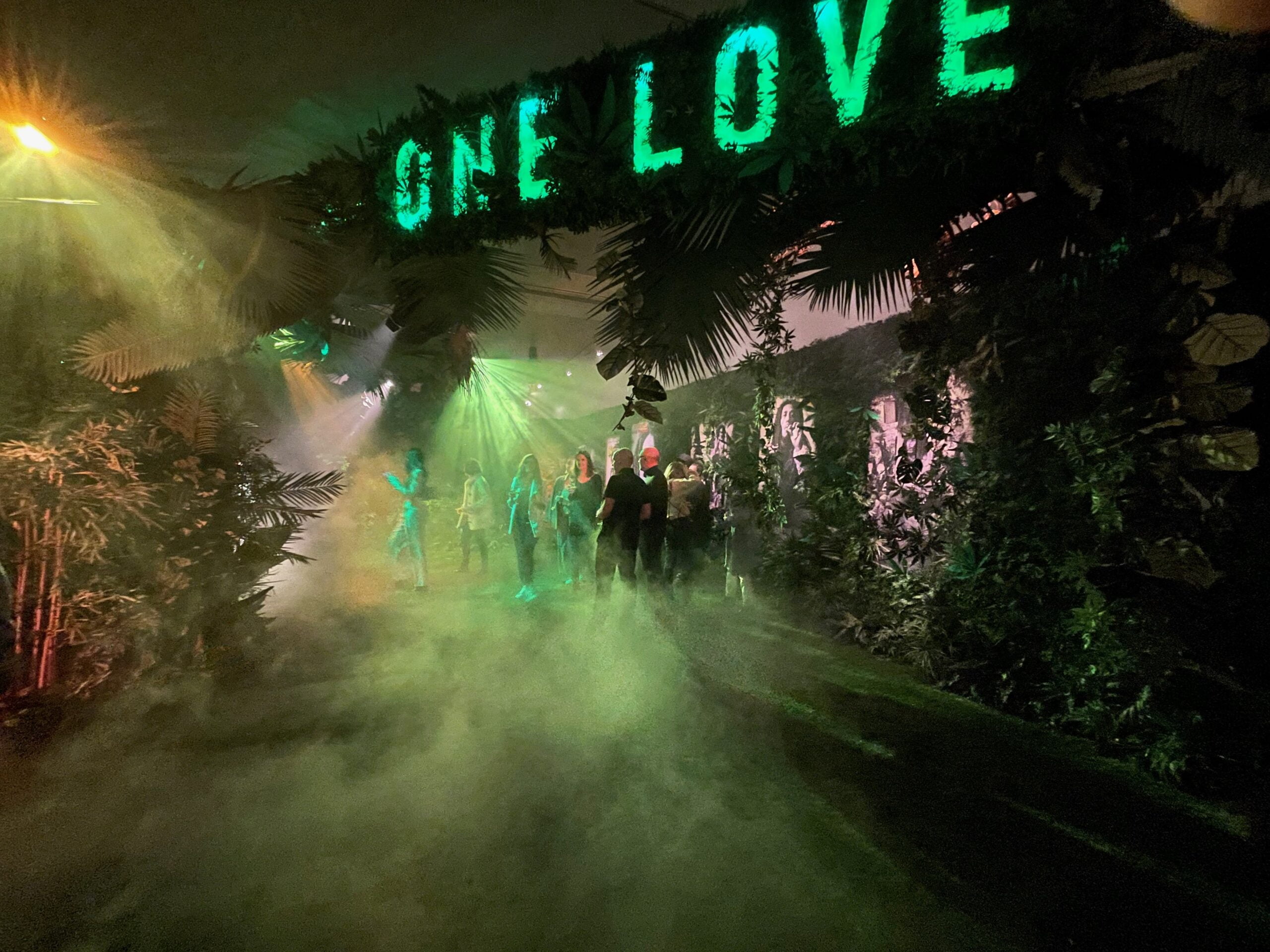 So far, so good – but turn the corner to the next area, and you’ll be faced with a vibrantly green Jamaican jungle, complete with a blanket of fog, and instagram-friendly swings & beanbags for you to recline on. Why the fog? It’s probably nothing to do with the fact that the next area is covered in images of Marley taking a toke from a few joints. After that, you’ll be handed a pair of headphones, and walk into the vibrantly neon entrance of the Soul Shakedown Studio – it’s like wandering into a nightclub, with people dancing, a disco ball twirling, and an audio-synched concert projected onto the wall. 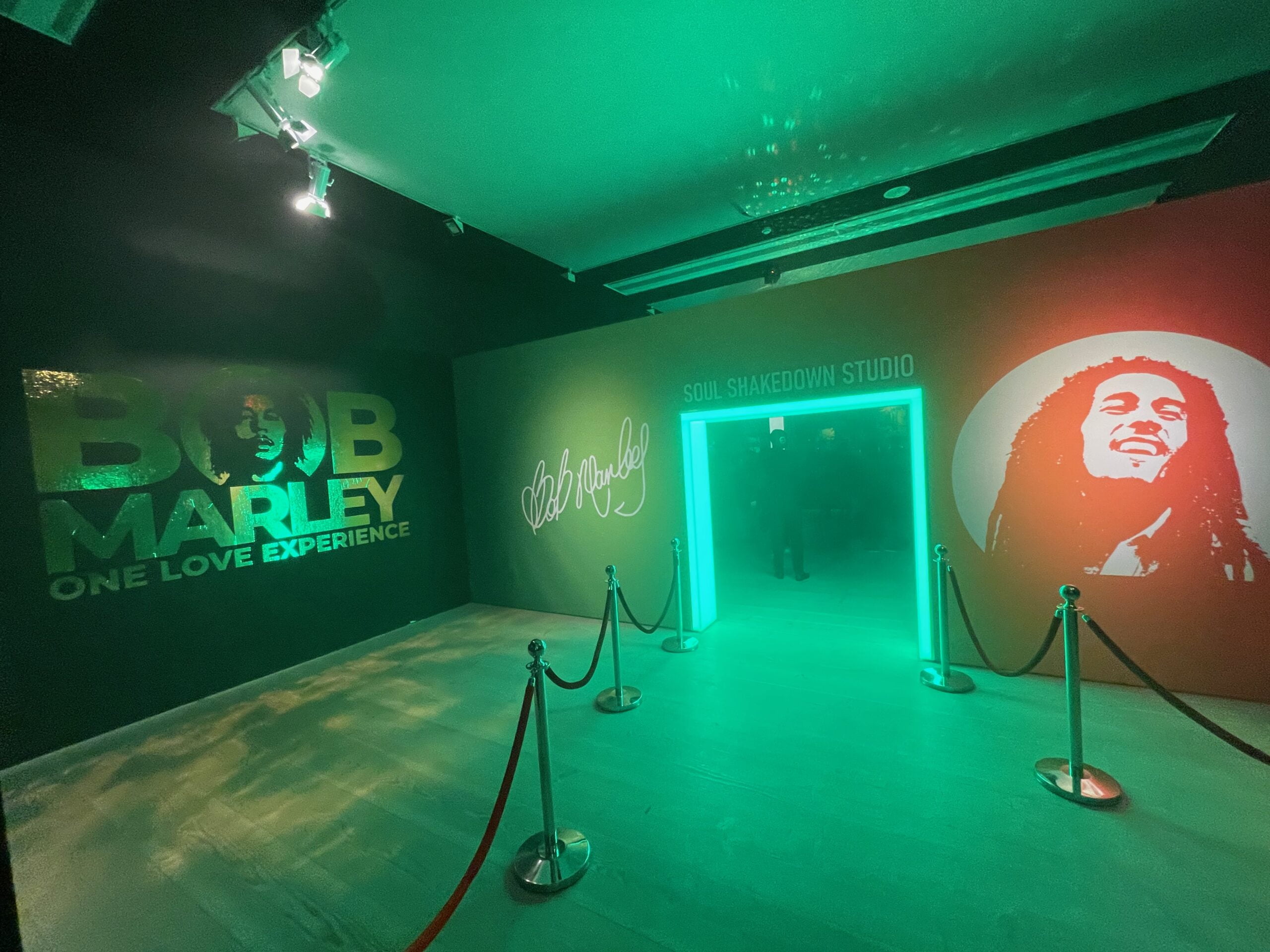 After a brief photo area, you’ll then get to the games room, with a jukebox, a couple of table-football tables, a pinball machine, and even a life-size goal with a ball to go with it. Slightly poignantly, right next to it are a pair of Marley’s own football shoes, with the mud still stuck to the soles. Everything’s playable (except for the table tennis table on the wall), and it does something that an ordinary exhibition rarely does – it makes you smile. 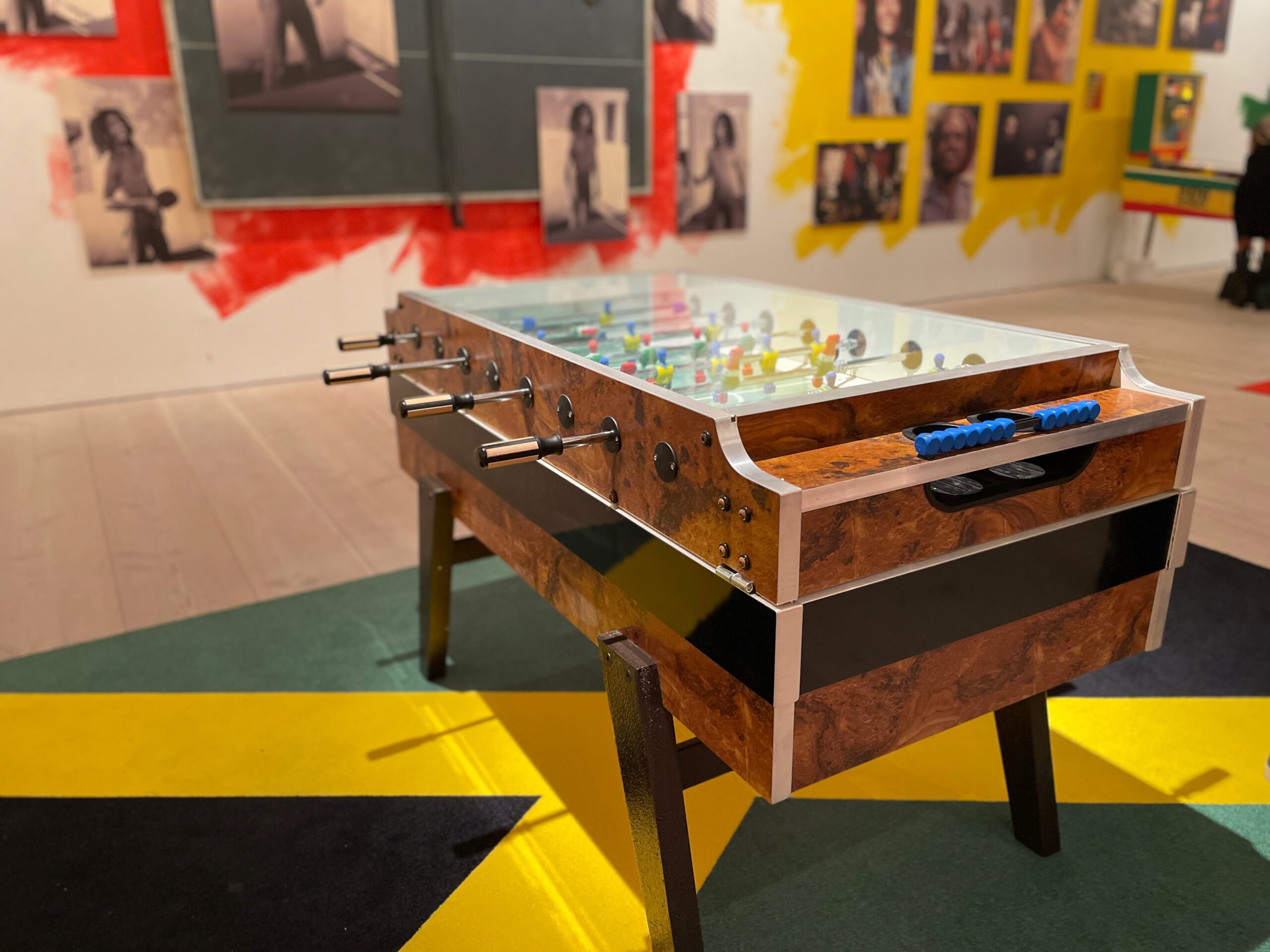 Following another labyrinthine set of stairs, you’ll get to the backstage area, which is a long corridor packed with speakers & equipment, with the muffled sound of live music playing behind the wall. It leads you to an area filled with fan-submitted artwork made by devotees across the globe, past small recreation of Marley’s own living room, and then to the ‘Next Gen Room’, which takes you through the musical & philanthropic achievements of his children and grandchildren. There’s even a full-sized tree, upon whose branches you’re encouraged to hang a message of positivity of your own.

Throughout all of this, it’s entirely possible that you won’t really learn anything you didn’t already know about Bob Marley – but that’s not the point. The point is to feel like you’ve gotten to know him a little better as a person, and understood his legacy in a more meaningful way. No, they don’t particularly go into his religion, or his political activism, but those are subjects that can’t really be explored in this format – that’s where the drier, more fact-based exhibition would thrive.

The show’s in town for just ten weeks before going onto a global tour, so if you’re a fan of the man’s music, best to snatch up a ticket.

Otherwise you really will feel like one of the Wailers.

NOTE: The Bob Marley One Love Experience takes place from 2nd February – 18th April 2022 at The Saatchi Gallery. Tickets cost between £19.80 – £77 and are available right HERE.

The Bob Marley One Love Experience

America in Crisis at the Saatchi Gallery A profoundly moving array of photos documenting ’60s and modern-day America, but one that dispirits, rather than rallies.