All cinemas wish they were The Luna Cinema.

And if they claim it’s anything less than incredible, they’re probably just projecting.

After all, The Luna Cinema is so-called because each of its venues uses the moon and stars as its ceiling, as well as some of the most iconic landmarks in the country for its backdrop. This year marks their 11th anniversary in the business, and it’s going to feature a barnstorming lineup of flicks. Running from now until September, here’s what’s going on..

A hefty 20 of their venues are in London, running from Royal Palaces such as Hampton Court and Kensington Palace, to the less regal but equally palatial Westminster Abbey and Regent’s Park. A few of the newer, more unusual settings in the capital include Brockwell Lido, Wimbledon Park, Ascot Racecourse and the hilltop (complete with jaw-dropping vista) at Alexandra Palace. And just to make the most of them, the films at these spots have frequently been chosen with the locations themselves in mind…

….which means that you can check out screenings of The Meg and Aquaman at Brockwell Lido; Jurassic Park in, er, Wimbledon Park; The Favourite at Hatfield House; and The Young Victoria at Kensington Palace. Joining them at the various other spots you’ll find everything from A Star Is Born and Bohemian Rhapsody to Pretty Woman, Harry Potter and Monty Python. 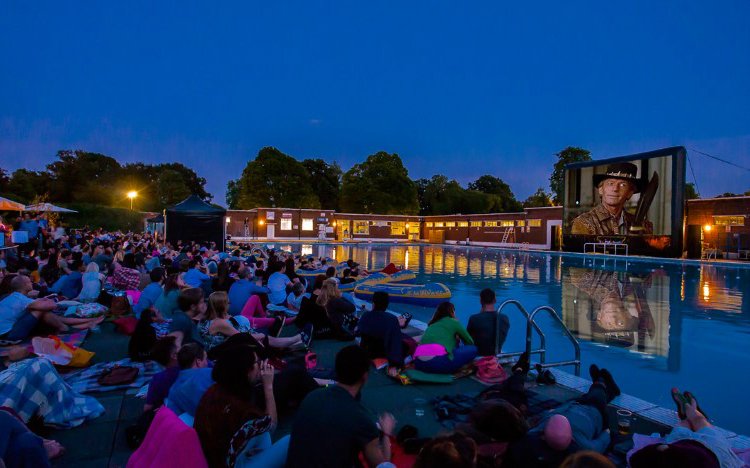 Each location has its own amenities, varying from poolside BBQs to street food between the venues – but you can guarantee some hot food and a fully stocked bar anywhere you go. And if you’re feeling flush, you can spring for one of their premium tickets, netting you fast track access to the bar, a complimentary drink once you get there and a branded director’s chair placed in a primo spot in front of the screen.

So you’ll definitely make the cut.

NOTE: The Luna Cinema runs across various locations from 17th May until 29th September. You can find out more, and book tickets at their website right HERE.

Want to watch something live? Check out our guide to The Best London Theatre Shows right now.