Note: This is a spoiler-free review.

The original Top Gun is such a statement of balls-to-the-wall machismo that it’s practically the cinematic embodiment of a wall made completely out of balls.

The opening sequence in Top Gun: Maverick shows that not a lot has changed in 36 years. Maverick is still ‘writing checks his body can’t cash’, still obliterating man’s capacity to go fast, jetting at Mach 10 against the sun’s silhouette, like some kind of testosterone-fueled Icarus, if Icarus was 10% Tom Cruise and 90% balls. Even the authoritarian admiral played by Ed Harris, who is trying to get Maverick’s hypersonic ‘Darkstar’ program shut down, admits that this guy ‘got balls.’

Over the course of 36 years, Maverick has managed to avoid the lure of a cushy desk job at a higher rank and has been allowed to self-express as a supersonic captain by former-classmate Iceman (Val Kilmer) who is now an admiral. 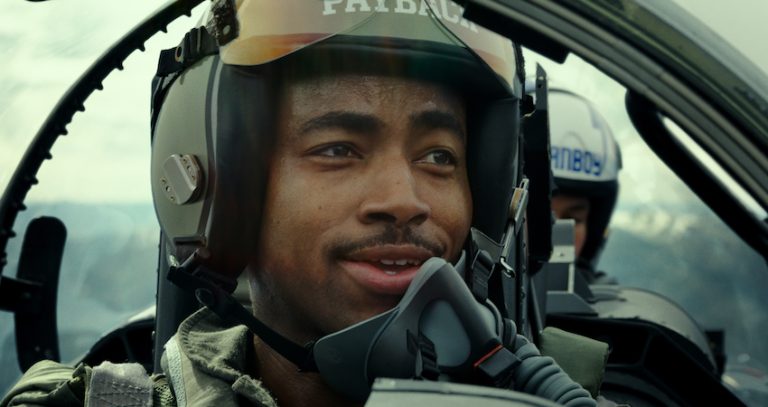 When the Navy is tasked with gathering a team of fighter-jet pilots to undertake a mission-impossible style mission of great impossibility, they turn to Maverick to train the next generation of elites. Maverick is forced to operate in an educational capacity by Commanding Officer Cyclone (Jon Hamm), but try telling Maverick, a man with notoriously pendulous balls and a serious penchant for flying jets, to not fly a jet on a dangerous mission and see what happens.

The film’s emotional heft comes from the endearingly filial dynamic between Maverick and his budding team of daredevils, which is made more so by the fact one of them is Bradley ‘Rooster’ Bradshaw (Miles Teller), son of Goose. Goose’s tragic death in the first movie was partially down to Maverick’s hotheadedness.  Maverick hasn’t forgiven himself, and neither has Rooster.

But Top Gun Maverick offers a route to redemption for Cruise’s guilt-raddled hero, who must put aside his egoic high-flying for a more measured, parental role than before. The film rehashes the oiled torso bromance of the first Top Gun during a topless game of football on the beach, but Cruise’s ripped torso is more Dad-bod than bro-bod, and he sits down for a rest in a deckchair at halftime. Top Gun shows how the roles we play, and the responsibilities we have for others, change and grow over time. The fading relevance of Maverick, who in the eyes of the team of young pilots is an ‘old-timer’ still ‘in need of an ego check’, expresses the nostalgia for this kind of old-skool hero movie, which is closer to a John Wayne Western than Marvel. When Ed Harris gives his damning indictment that Maverick’s kind is ‘headed for extinction’ he expresses the feeling that this kind of blockbuster, the gung-ho hero movie embodied by Tom Cruise, has reached its conclusion. For all modernity’s technological advancements and high-spec new fighter jets, which very soon won’t even need a warm body to fly them, Maverick maintains ‘it’s not the plane, it’s the pilot’ that matters. Maverick flies in the face of a system trying to reverse this, and shows the dramatic power inherent in a feat of individual brilliance.

In a strange kind of way, the relationship between the first and second Top Gun reminds me of Joni Mitchell’s 30-year-apart renditions of her song ‘Both Sides Now’.  The 1969 version is fun, upbeat and maybe something you could just about dance to, but when she sang it in 2000 the song had changed. Joni couldn’t sing it the same because she wasn’t the same, and the initial tune of youthful exuberance had become sombre and meditative, as if all life’s lessons learned imbued it with a touch of regret.

Joni’s 2000 version of ‘Both Sides Now’ and Top Gun Maverick both explore what it means to play the same song after 30 years. Maverick sings the same lines but in a different key. It’s the same turbo-charged brilliance that made number one so popular – jets go fast, one-liners go faster – but expressed in the context of ageing and regret, this film cares more about the warm body in the cockpit than it does about the plane. Tom Cruise is the Peter Pan of cinema, but Top Gun Maverick is about how to grow up a bit.

We still need a hero, but that hero is more dad than lad.

NOTE: Do you feel the need, the need …to see this film? Then check out the showtimes here.

Where’s the best place to see it? Take a peek at London’s best cinemas…