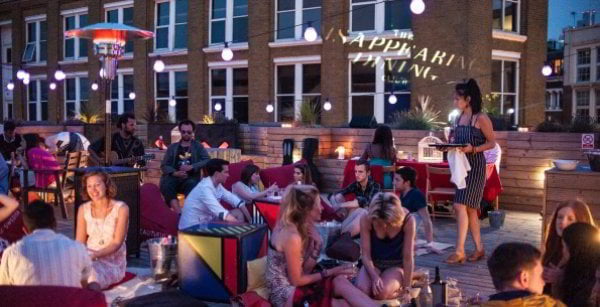 We recently attended an amazing rooftop BBQ / picnic on a hidden rooftop in Shoreditch, run by Disappearing Dining Club. It was amazing because the best way to spend a warm Saturday evening is in the company of friends on a rooftop enjoying cocktails, live music and unlimited food from a BBQ that someone else (who can cook) is in charge of.

This kind of thing doesn’t happen too often in London.

It’s allegedly something to do with the “unpredictability” of the British weather. However if the rumours are to be believed – which they obviously always are – then the next two weeks are going to be roasting…

So we asked DDC to slip in an extra couple of rooftop BBQ dates just for you (for this weekend, and next weekend) and they’ve only gone and done it.

You’ll ascend five floors of a staircase near Old Street tube, a staircase which has purposefully been made to look rough in order to magnify the feelings of delight that you’ll experience on finally reaching the roof. The first thing you’ll spot once you get up there is the bar – which’ll come in handy after you’ve got through the complimentary cocktails – followed by chefs grilling meat in the BBQ shack, and fellow diners drinking summer cocktails and tucking into giant picnic baskets filled with fresh bread, potted meats and salads (merely their starter….).

Complimenting the limitless BBQ of chargrilled, spicy lamb cutlets with harissa yoghurt; squid & prawn skewers; salt grilled picanha and more is Eton Mess for dessert, plus live music from the most only entertaining 8-man ukulele sing-along band in London.