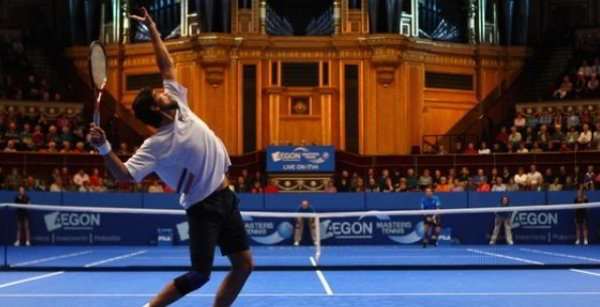 The chances are high that you’ll be spending next Thursday afternoon at work.

With this knowledge in hand, we’d humbly like to suggest an alternative which you’re very unlikely to not prefer.

You’ll head in to work as usual, but in a mood that’s upbeat enough to arouse the suspicion of even the least perceptive of your colleagues.

At lunch time you’ll shut down your computer, and head directly to the Royal Albert Hall.

On arrival you’ll meet up with (delete as appropriate) your date / a friend / the boss that gave you the afternoon off, and head in to the Aegon Tennis Masters. You’ll have two complimentary tickets (courtesy of Asahi Super Dry, the tournament’s official beer sponsor) in hand.

Your afternoon will start with the “allplay” Tennis Challenge, where four celebrities – with the help of Greg Rusedski – will battle out the finals of a six month long tennis challenge.  It will continue with an ATP Champions Tour match between Thomas Enqvist and Mark Phillippoussis, and then a doubles exhibition match before concluding with the“Match of Legends” – Henri Leconte vs. Ivan Lendl.

You and your guest will then be invited in to the Asahi bar, where you’ll be introduced to none other than the world’s most famous Greek/Australian (after Peter Andre*): Mark “The Scud” Philippoussis.

We’re not done yet.

After hanging with Mark in the bar just long enough to have formed a lifelong friendship with him, it will – regrettably – be time to leave.

But not before Asahi have bestowed upon you one last parting gift: a case of their finest Asahi Super Dry Beer to take home.

There’s only going to be one winner at the Royal Albert Hall next Thursday.

You only have one entry to the competition.  To have a bigger chance of winning you’ll want multiple entries in the competition, which you can get by entering (up to) once per day and by inviting your friends to enter the competition each time you do.

Each friend that you invite will get you another entry to the draw (limited to 5 friends / 5 extra entries for you each day).

So this is a game of chance, but you control the odds.

The winner of this competition will be selected at random in FOUR DAYS on Monday 28th November at 11am. The prize (two tickets to attend the Aegon Tennis Masters, courtesy of Asahi, on the afternoon of Thursday 1st December 2011, plus access to the Asahi bar, an introduction to Mark “The Scud” Philippoussis and a case of Super Dry Asahi beer to take home) may not be exchanged for anything else. But you can give it to someone you really like, if you really want to.

Note: This competition has now closed.