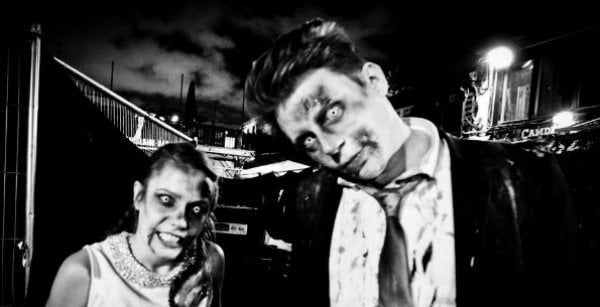 When Halloween arrives, you’re going to have to do something really scary.

If you decide to do this then there are, of course, many options open to you. But the “zombies in cages, secret testing facility for the undead, Mexican street food-filled, immersive cinema screening in a warehouse” one is a pretty good place to start.

Brought to you by Backyard Cinema, Apocalypse opens for ten nights on 31st October, featuring films like 28 Days Later, Shaun Of The Dead and Zombieland. However the films here are merely one small piece of the puzzle.

After securing tickets you’ll receive a map with instructions on how to get to the safe house, which is located within an army camp inside a converted, disused warehouse. SWAT team members will take you straight in to the decontamination room, where you’ll be briefed, moved through quarantine and then served Mexican food from Benito’s Hat, ‘antidote’ cocktails and craft beer from Brooklyn Brewery. As is customary inside quarantine facilities on the eve of the apocalypse.

Conscious of the need to keep your food down, you’ll then head into a large underground zombie testing lab and be faced with cages of the undead, body bags and scientists experimenting on people who may or may not be alive. After helping the Red Berets plan their defense, it’ll then be time for your film, which *SPOILER ALERT* is going to end with actual zombies escaping and trying to eat your face.

Now as you well know, the best way to defend against zombies is (when possible) to surround yourself with outward facing treadmills. However when you’re moving around a public place like this, the best way to ensure your survival is to be brave; to be focused; to be agile…

… and to bring a friend along who runs slower than you do.

NOTE: Tickets for Apocalypse by Backyard Cinema (which runs from 31st October 2014 – 9th November) start at £25, and are now on sale HERE.