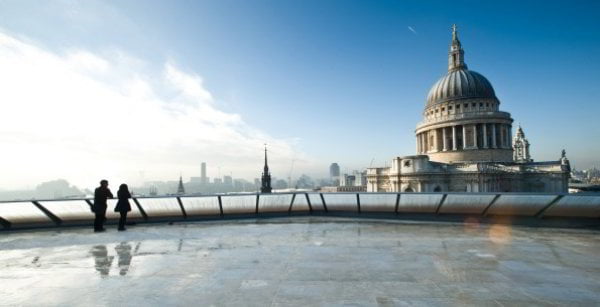 Austin Powers On A Rooftop | One New Change

There’s nothing scarier for people who are learning to swim than being exactly halfway through a width of the pool.

Stranded in the middle and unable to touch either side – being equally far from the side they just departed as from the side they’re heading to – their feelings of panic and fear are exactly the same as the feelings that everyone else gets on Wednesdays, which – being as far from the previous weekend as they are from the next one – are the very worst day of the week.

Fortunately, however, we’ve uncovered something that allows everyone to quickly escape any grim or unsettling feelings of midweek hopelessness.

Our four-part method for doing it is simple:

1) Use the power of your mind to imagine that it’s June; it’s hot; you’ve just spent all day long basking in sunshine; and you’re patting yourself on the back for having had the foresight to organise an alfresco evening activity.

2) Picture yourself rapidly ascending to the top of One New Change in a glass elevator, before emerging onto an expansive rooftop with dramatic views over St Paul’s Cathedral that’s filled with 400 revelers gearing up for an open air screening of Austin Powers by enjoying champagne ice lollies, drinking cocktails from a bespoke Shaguar Bar and interacting with characters from the film.

3) Buy a ticket to attend the event, here

4) And then wait for two weeks.

It’s not the fastest time-travelling technique out there, but it works.

The Rooftop, One New Change, The City, EC4M 9AF