If we took one thing away from our painstaking trawl of London’s markets – from street food villages, to awning-covered squares and converted warehouses…

But we also took home something in a more enriching, metaphorical sense; that is, a refined, tried-and-tested collection of the finest London markets, which, today, we would like to share with you – because sharing is caring.

Except when it comes to raclette.

Looking for London markets that don’t sell food? May we direct you to Portobello Market, Camden Market, Columbia Road Flower Market… and all of these excellent London flea markets. 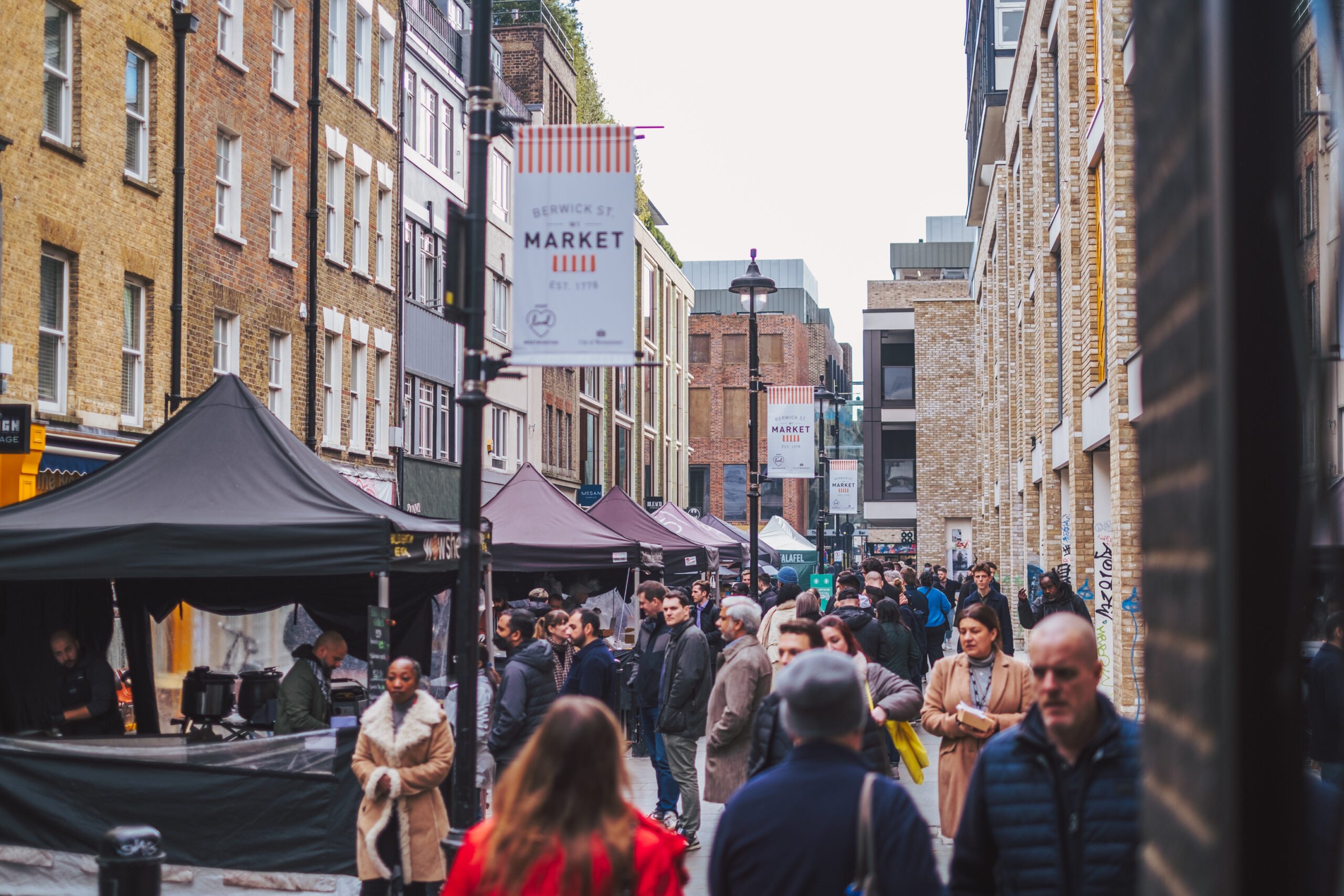 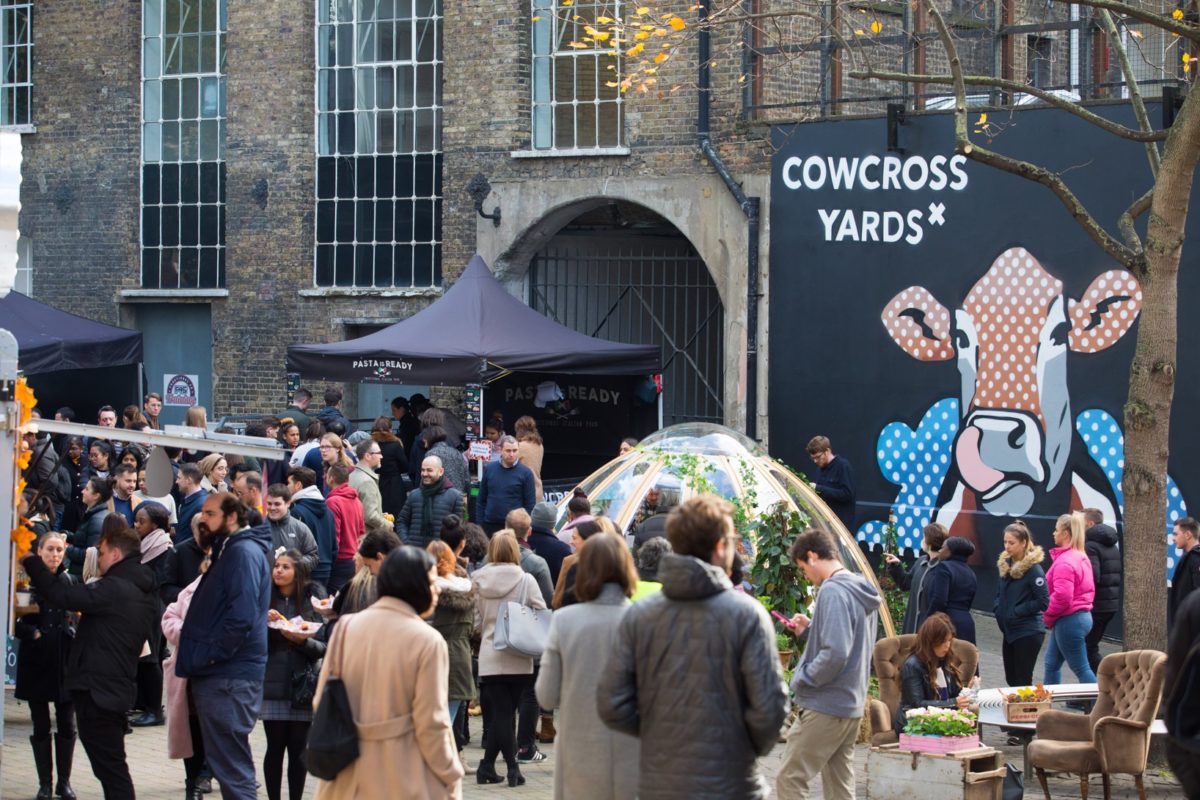 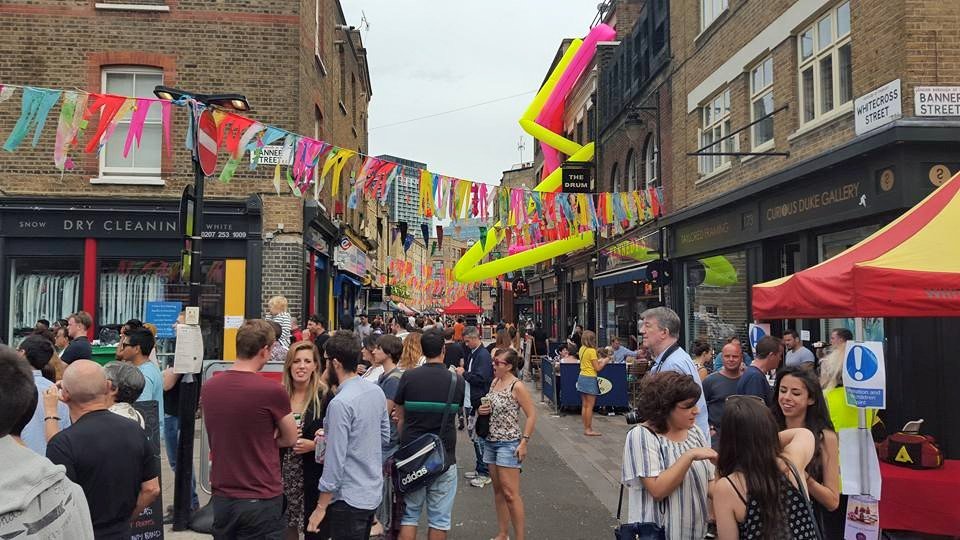 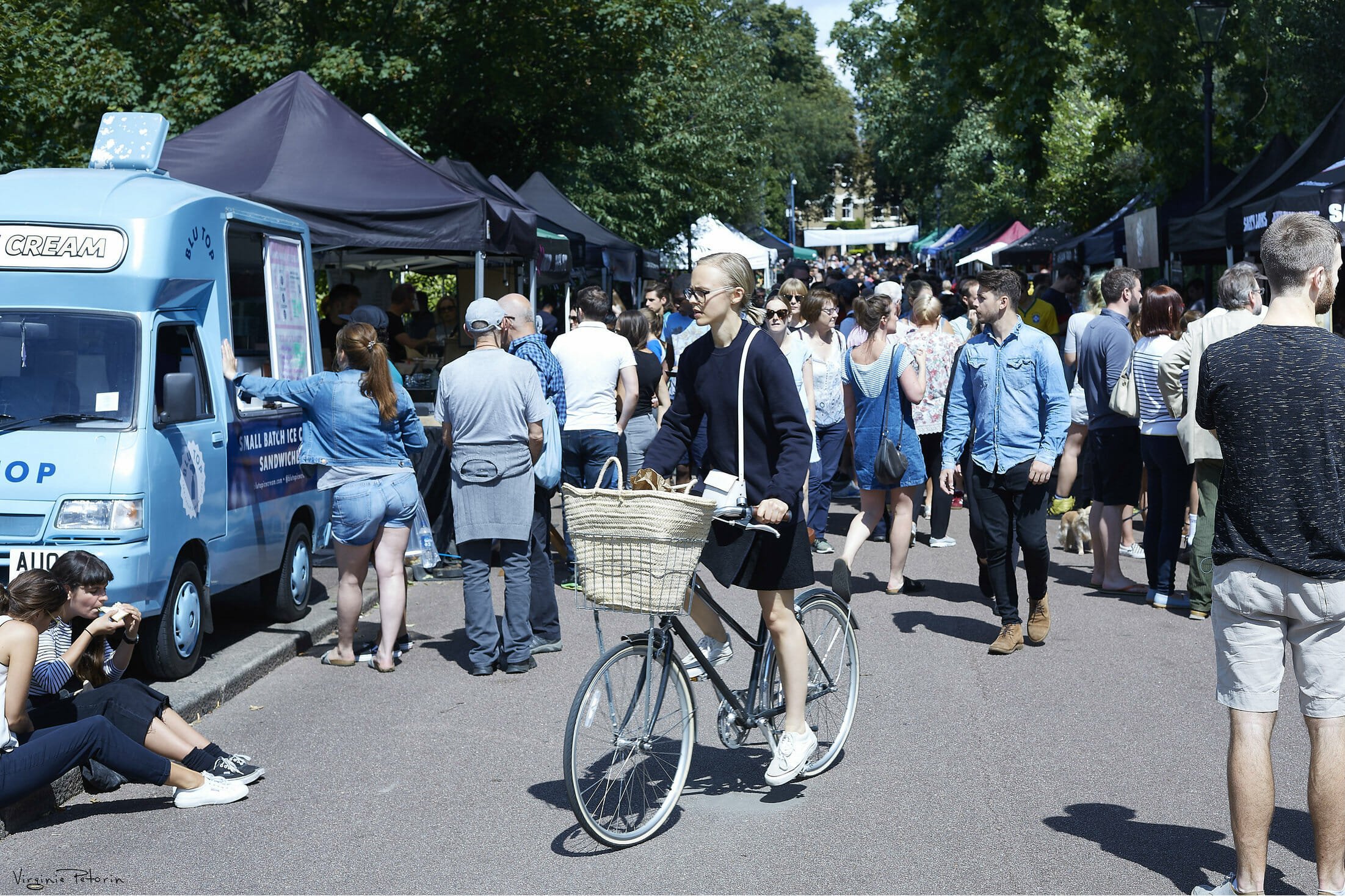 Every Sunday the Nightwalk – a beautiful pedestrianised street in Victoria Park – comes alive with a fresh produce and street food market. Visitors can bag themselves loaves of freshly made bread, cheeses, olive oils, ice cream, and more, before tucking into plates of hand-made dumplings from Gyoza Guys or cheesy savoury crepes from Crêpes à La Carte. You’ll also often find live music, and there are stalls selling locally brewed craft beers and wine, rounding it off into an ideal sunny afternoon. 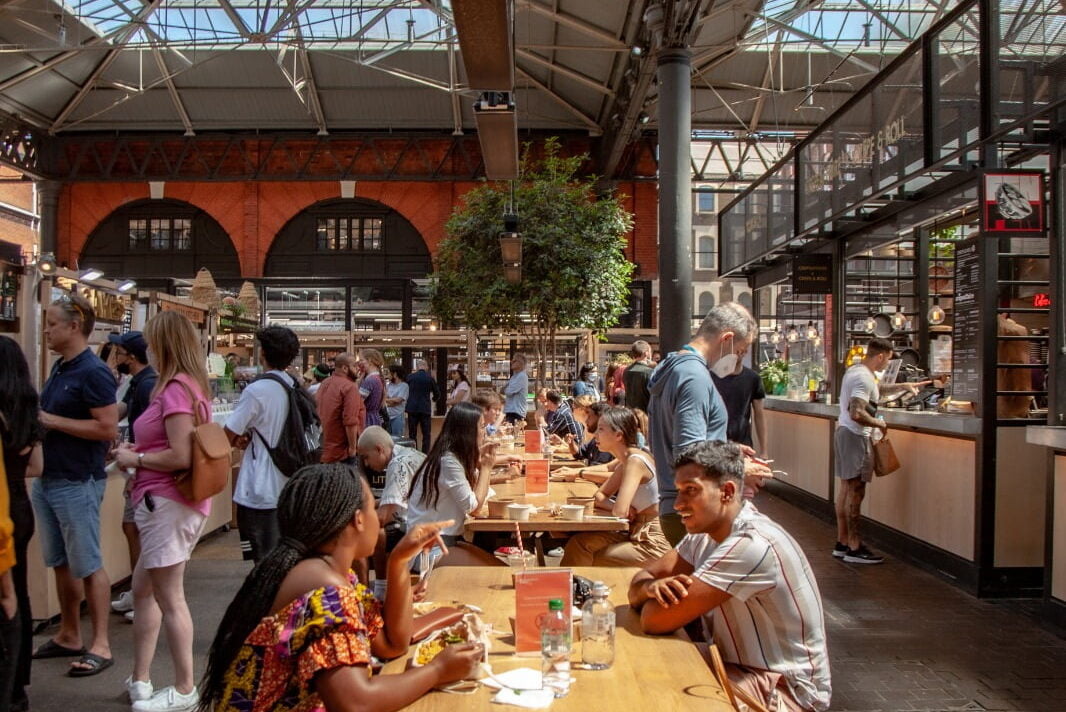 Now it’s home to boutiques, restaurants, vinyl stalls, antique markets and street food, the latter of which you can score at trader vans parked outside the market (like the Duck Truck and Le Swine), or in the market’s pop up kitchens. 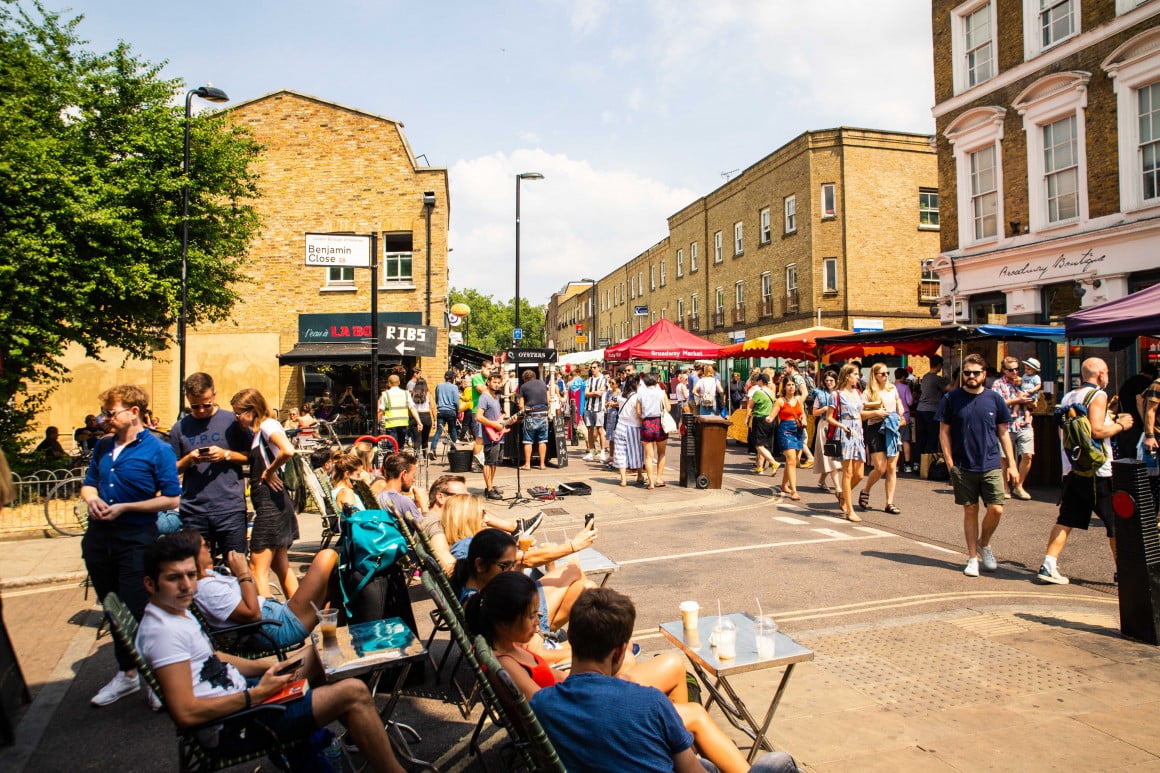 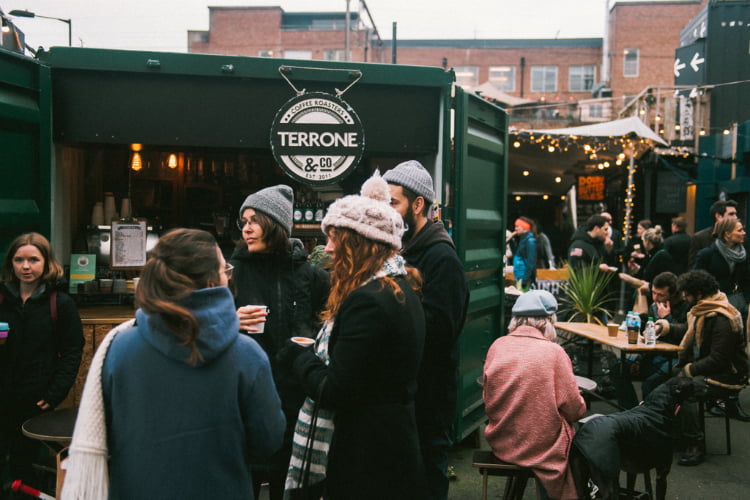 A quieter, more relaxed affair than Broadway Market round the corner; this creatives’ hub plays host to a low-key market every Saturday, with stalls ranging from vintage homeware and handmade jewellery to a well-curated collection of street food. It’s been the making of several now-stalwarts of the London scene, including BAO and Lucky Chip, and is now home to the likes of Morty & Bob’s, and Lemlem Kitchen – whose light and fluffy ‘Afro-tacos’ are best enjoyed on the sun-drenched mezzanine terrace overlooking the whole set-up. 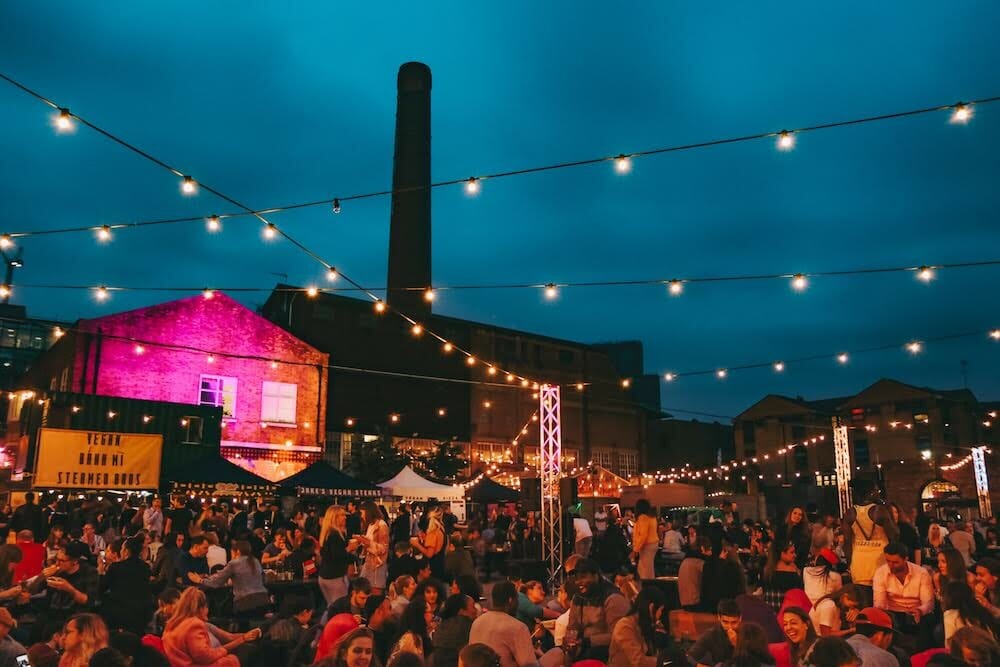 Brick Lane has long been a hub for street food in London, with regular markets popping up throughout the week. Find stalls scattered along the street on Sundays, as well as street food vans parked in fairy-lit yards and hawker-style markets in the old brewery buildings. Every now and again, the vast Old Truman Brewery plays host to Vegan Nights, a bustling night market with DJs and all-vegan traders. 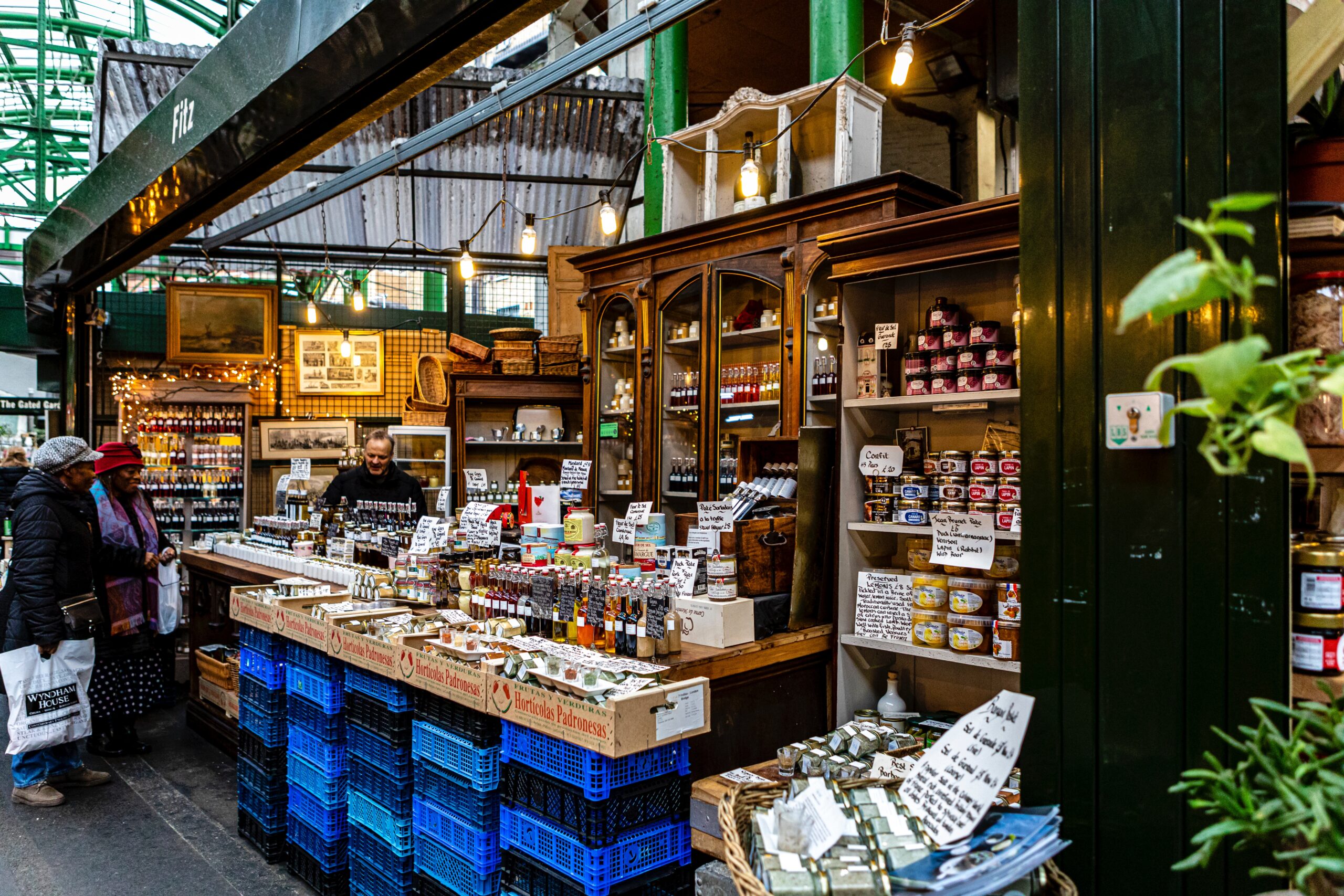 Disclaimer – we are not the first to say this, but Borough Market’s pretty good. That means that you’ll be rubbing shoulders not only with the finest artisanal and old-school produce traders when you visit, but probably ¾ of London’s tourist population, too. But that’s entirely by-the-by when you’re on a mission to track down giant truffles, wine-soaked Italian cheese, and Kentish nut oils. Take a well-deserved break from the polite elbowing with a score of street food dishes, like slow-roasted meat baguettes from Hobbs, raclette made with Bermondsey cheese by Kappacasein, and er, upmarket goat from Gourmet Goat. 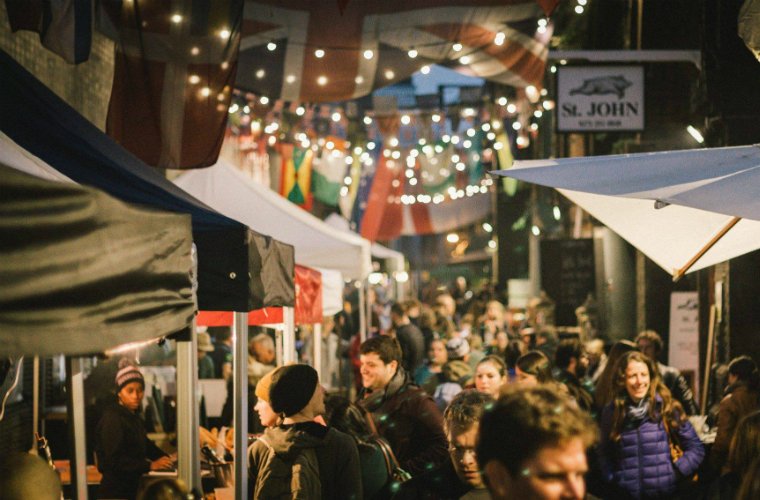 Without a doubt, the flag (and bunting) bearer for London food markets is Maltby Street Market. Tucked down a secluded alley, lined by repurposed railway arches and festooned with flags and strings of bulbs, it has the feel of an industrialised village fete. You’ll find a constantly changing mix of traders here, from a 1940s drinking den run by small-batch distillers, Little Bird Gin; to indecent amounts of melted cheese, courtesy of The Cheese Truck (also behind Camden’s The Cheese Bar). Follow the tracks south, and you’ll come to the quieter Spa Terminus market, an artisanal wholesaler open to the public on Saturday mornings with stalls from Neal’s Yard Dairy, Monmouth Coffee, Flor bakery and more. 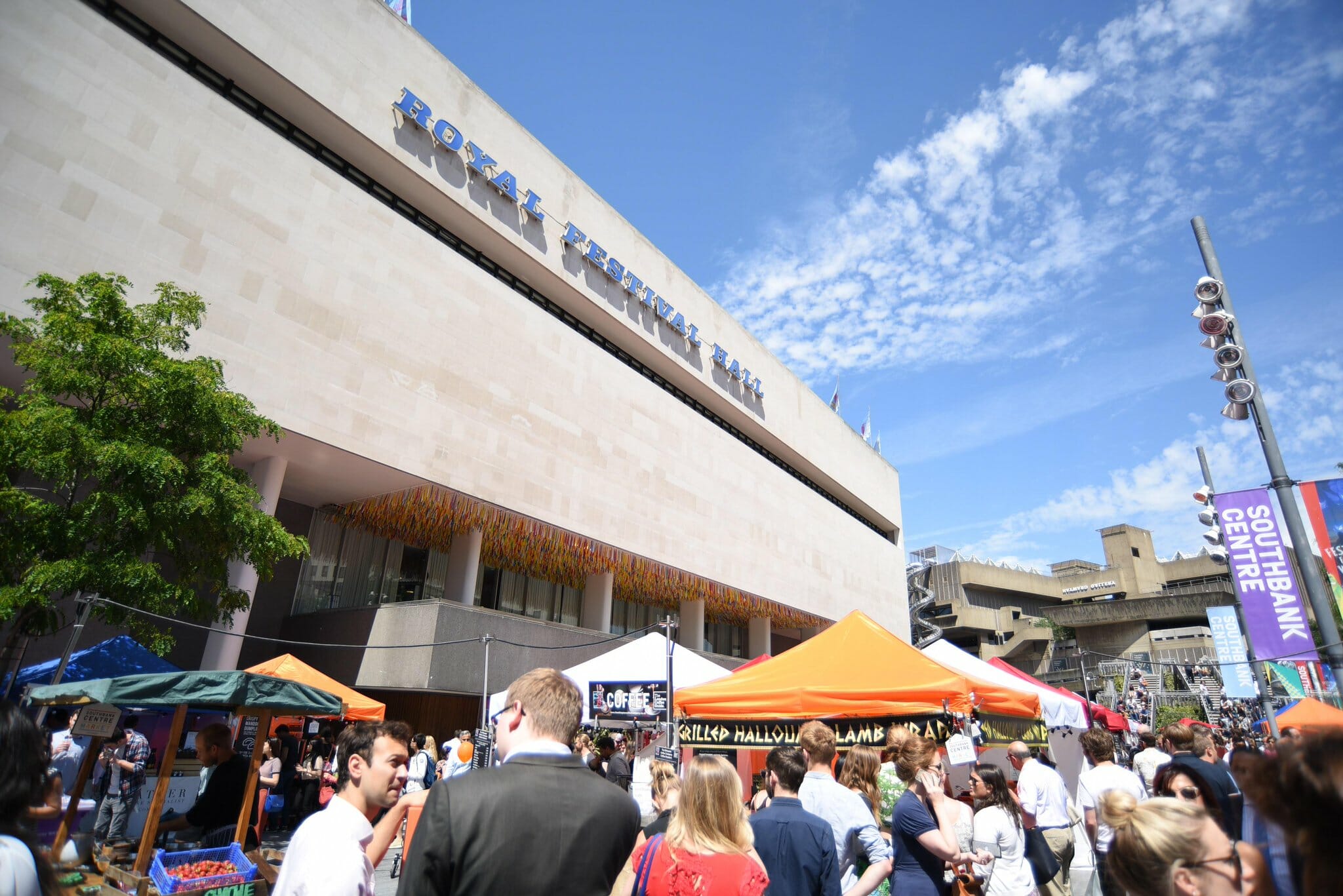 And the Southbank Centre’s bustling street food market has gone from a modest pop-up with a couple of stalls to a fully fledged village. Pitching up on Upper Ground, just behind the Royal Festival Hall, it’s a labyrinth of different cuisines; try East African vegan dishes at Ethiopiques, The Polish Deli’s pierogi dumplings, and flaky Portuguese pasteis de nata at Galeta. 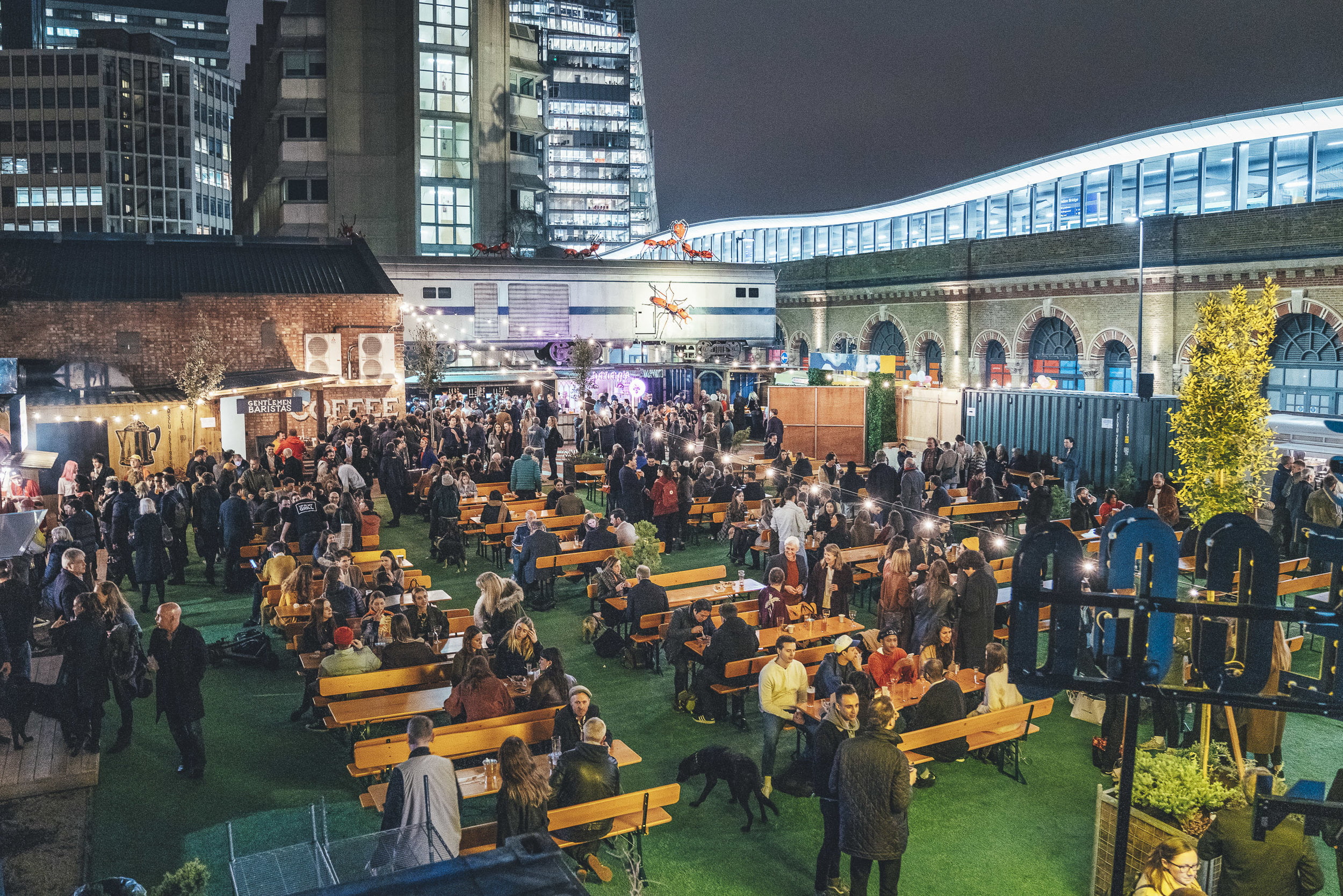 Vinegar Yard comes to us courtesy of the same team behind nearby Flat Iron Square, except this time they’ve brought in a train carriage and a whole army of oversized ants. Seriously. You’ll also find various leading food vendors such as My Million Pound Menu winners Baba G’s; a huge open-air garden; numerous bars; andddd a weekend flea market. One visit and you’ll be itching to go back… 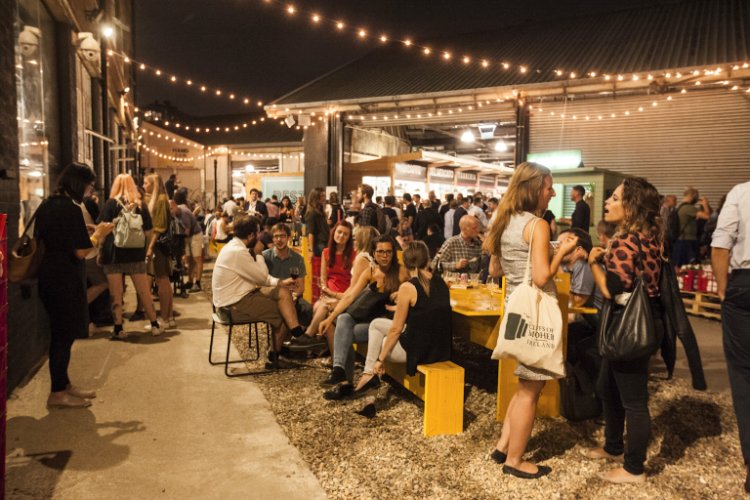 Market doesn’t really do this place justice, considering that – besides a sprawling collection of international traders peddling everything from fresh pasta dishes to Japanese donburi – there’s also an artisanal Italian supermarket, a brewery, a co-working space, a barbershop aaand a mushroom farm. And it’s a formula that’s proved so popular, they’ve now opened another Mercato in an old Mayfair church. 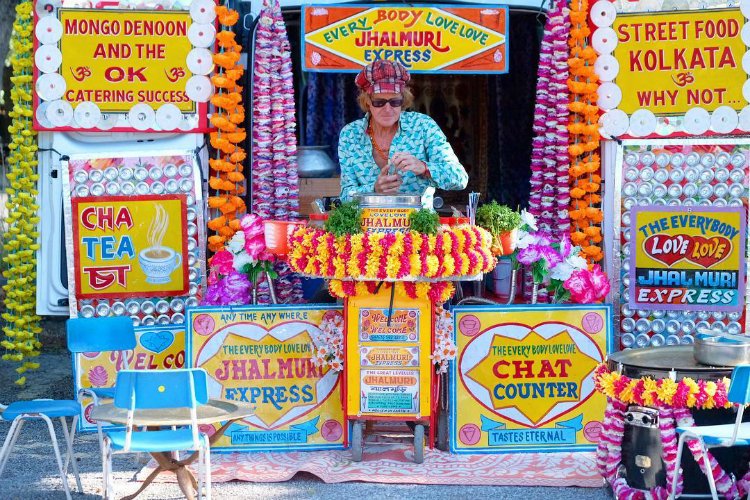 Not just somewhere to pick up your weekly essentials of fresh fruit, veg, and pre-bottled negronis aged in Bordeaux wine barrels, Brockley’s Saturday market boasts a cohort of street vendors at the top of their game. Expect appearances from the likes of Nyborg’s Kitchen with their decadent Swedish bakes; empanadas from Chacarero; and the flower-festooned Jhalmuri Express. 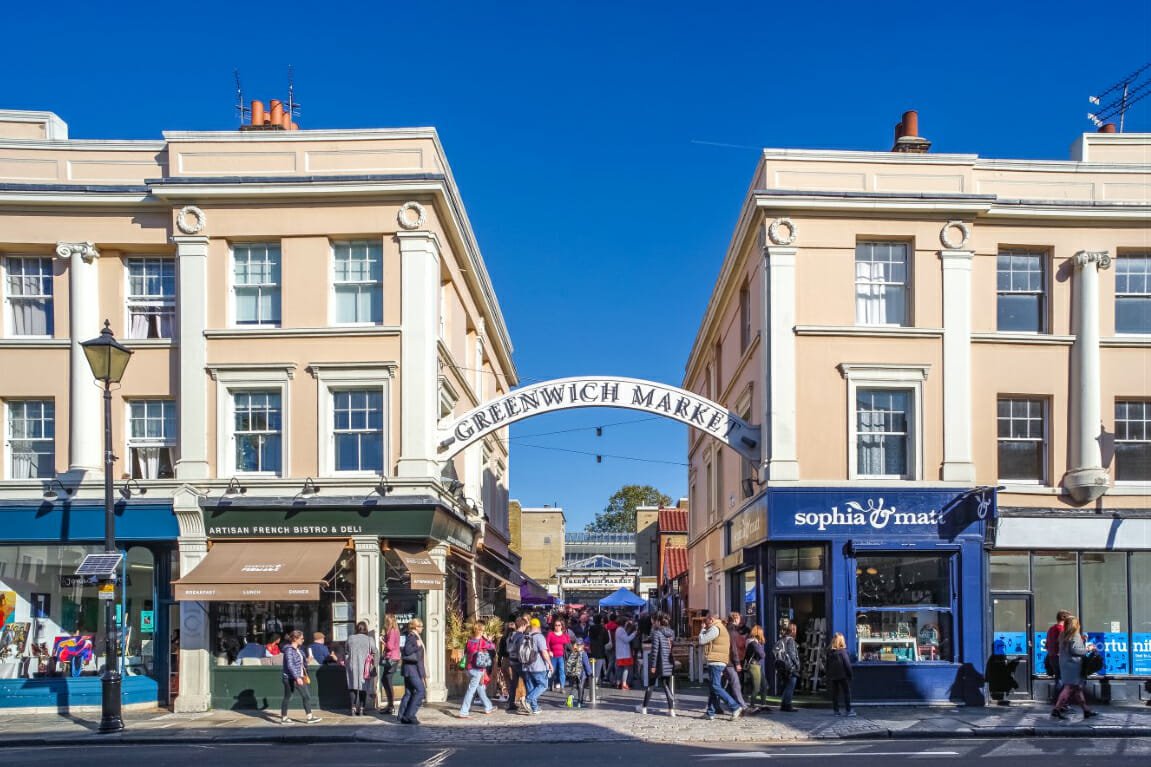 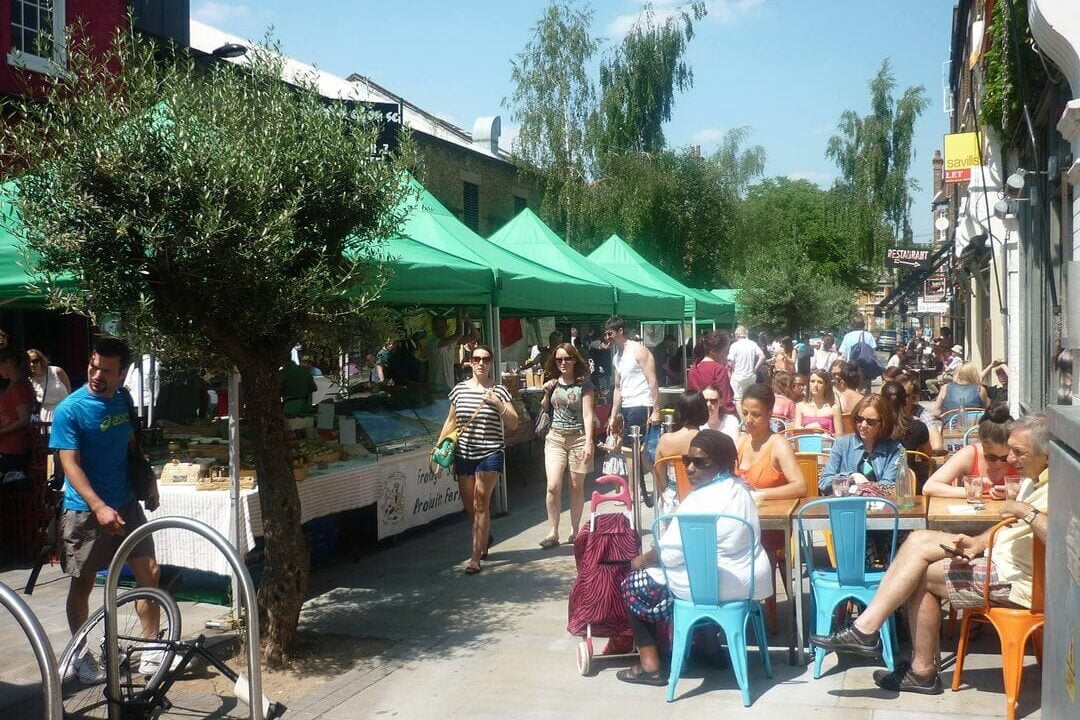 Every Saturday, Clapham’s Venn Street becomes a little pedestrianised paradise, with tables and chairs spilling onto the pavements from the cafés and bars lining the street, and a pop-up market running along its centre. Fresh produce is the main draw here, with stalls hawking fresh fish, fruit and veg as well as pantry goods, fresh bakes and even biltong. But those just swinging by for a quick bite won’t be disappointed either, with stalls cooking up dishes from Sri Lanka, the Seychelles, and beyond. 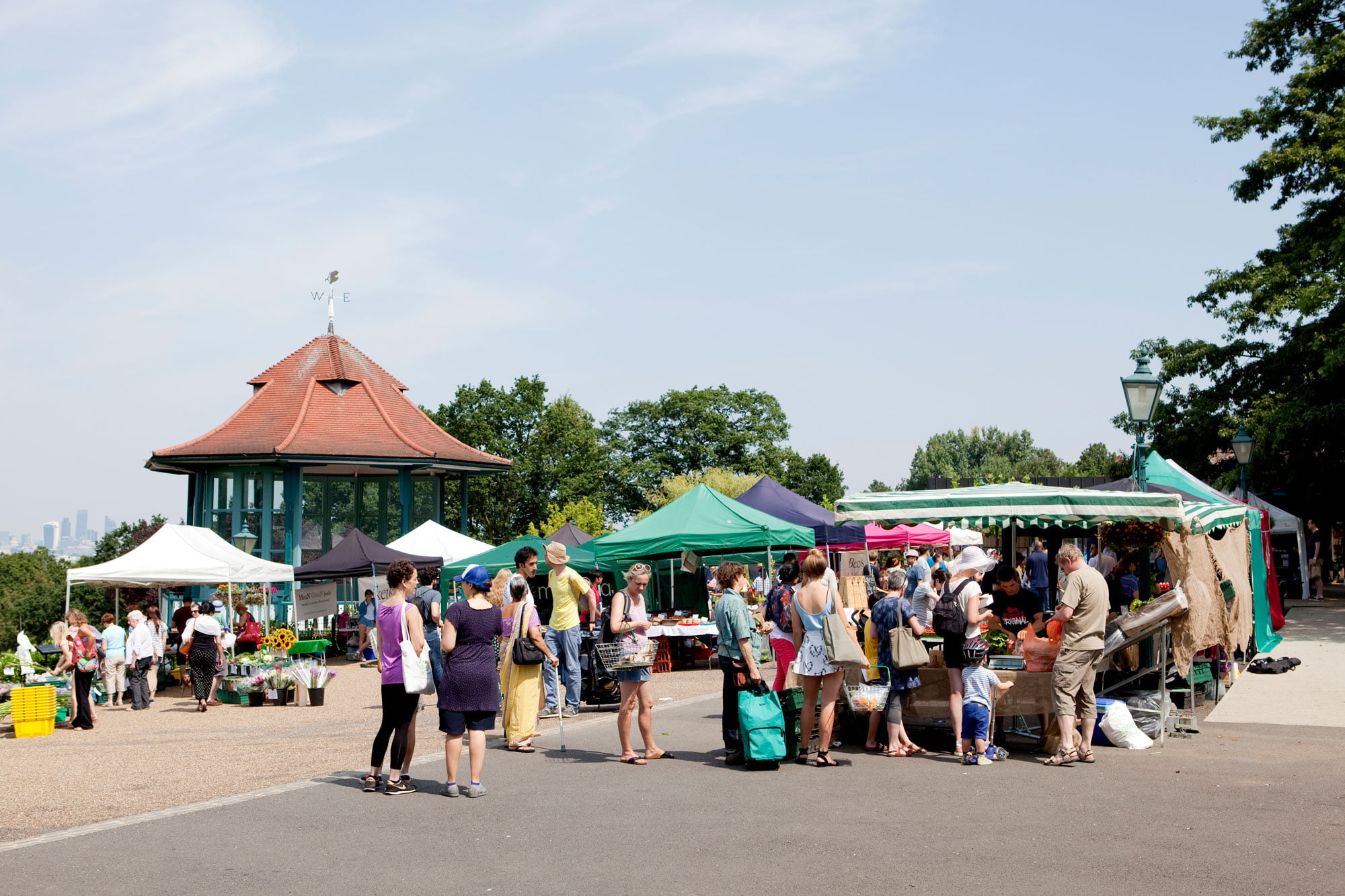 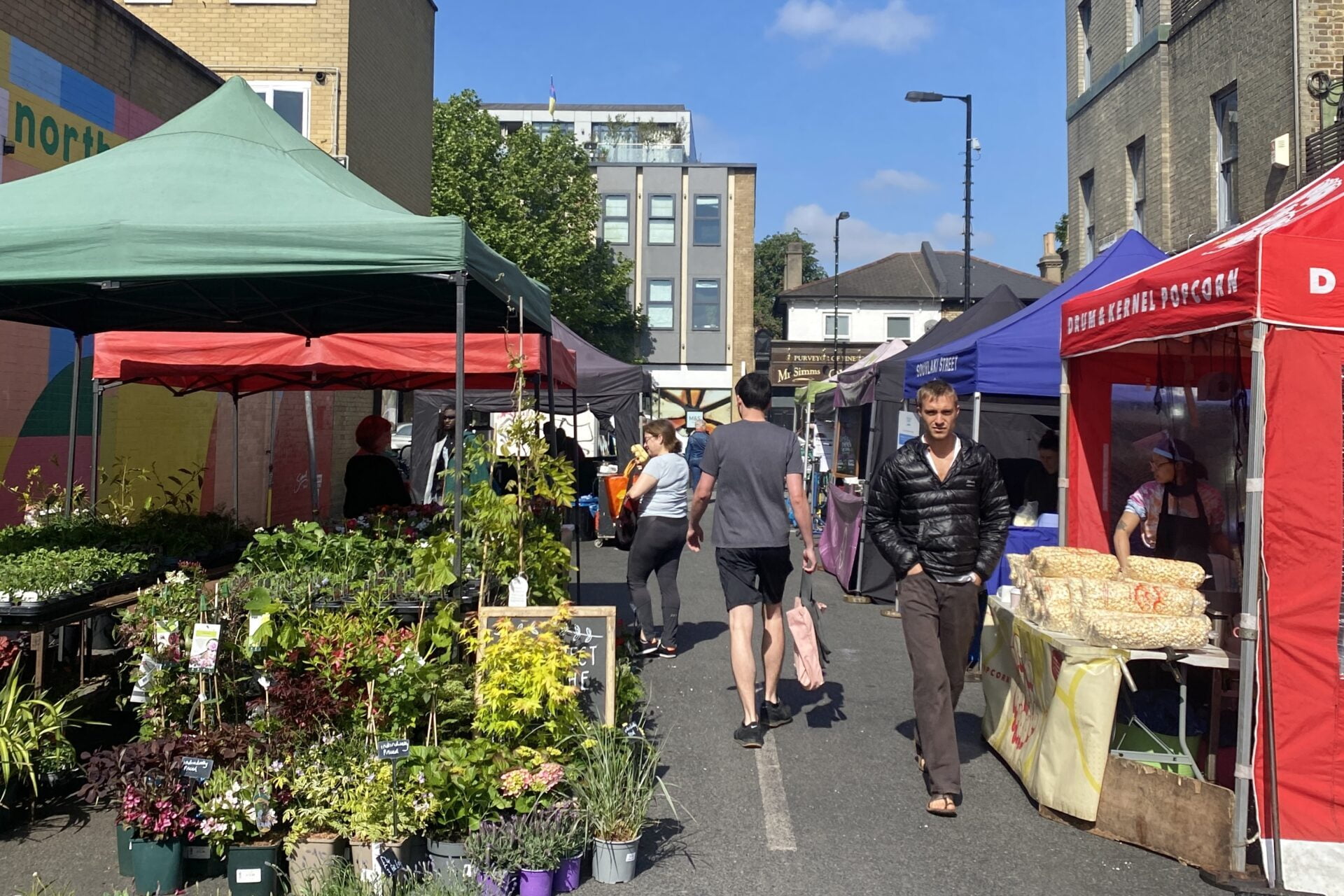 Dulwich’s North Cross Road already has a supremely browsable collection of delightful independent shops peppered along its width, so you might be tempted to think that the market springing up every Saturday is merely the icing on this retail cake. Well, allow us to disabuse you of this falsehood right now. The market is the cake. Here you’ll find dozens upon dozens of richly varied stalls, slinging goods ranging from pastries to Polaroids, fish to furniture, bread to bicycles, and everything in-between. There’s also plenty of street food to get your mitts on – everything from tartiflette to a giant hog roast. You’ll want to get there early though, as it’s known to sell out fast. 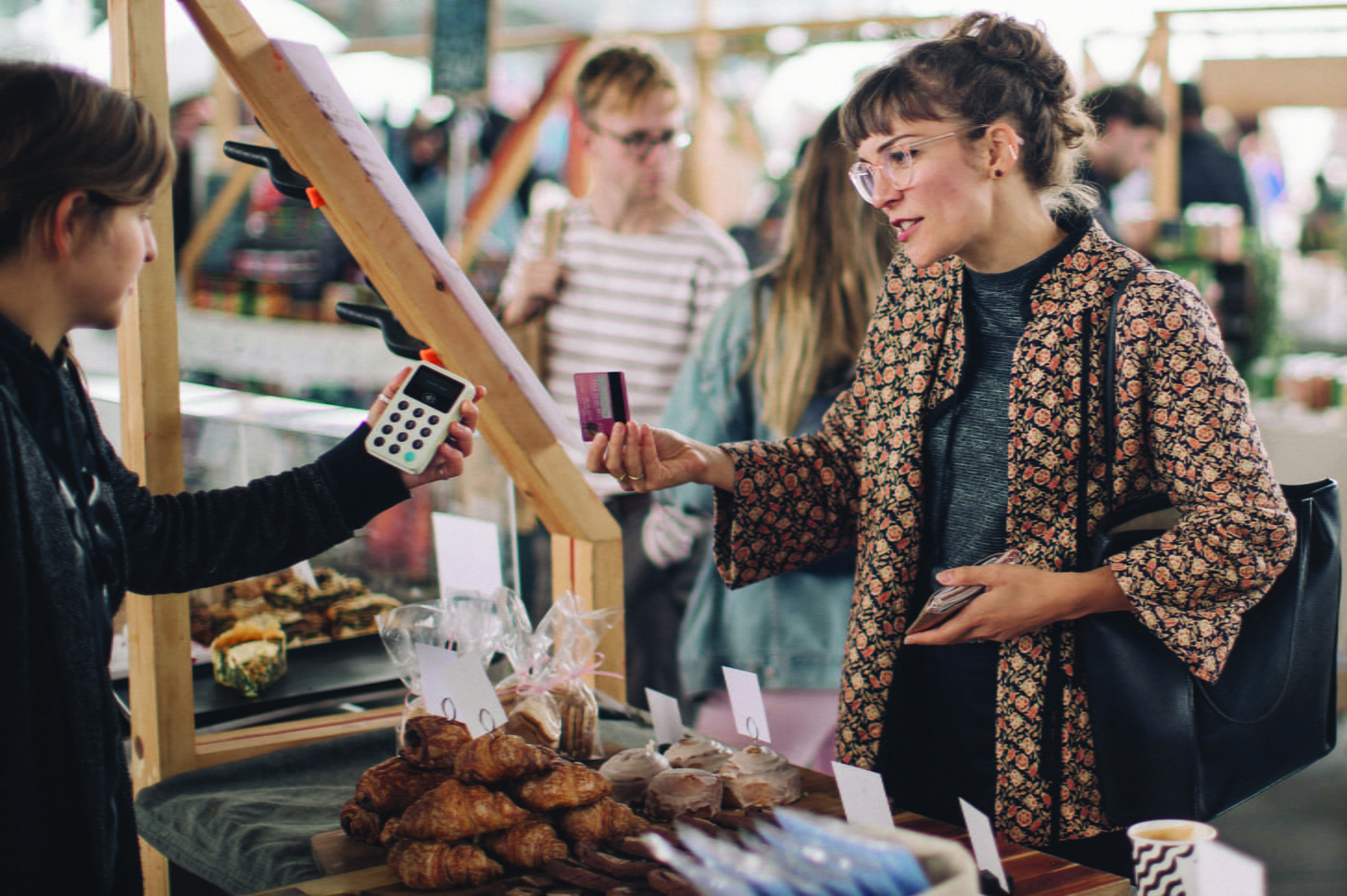 This brand new weekend market is hitting the ground running. Not only can you stop by to peruse fresh bakes, cured meats, farmhouse cheeses and desserts… there’s also a clutch of independent craft stalls, where makers hawk hand-made jewellery, clothing, homeware and more. 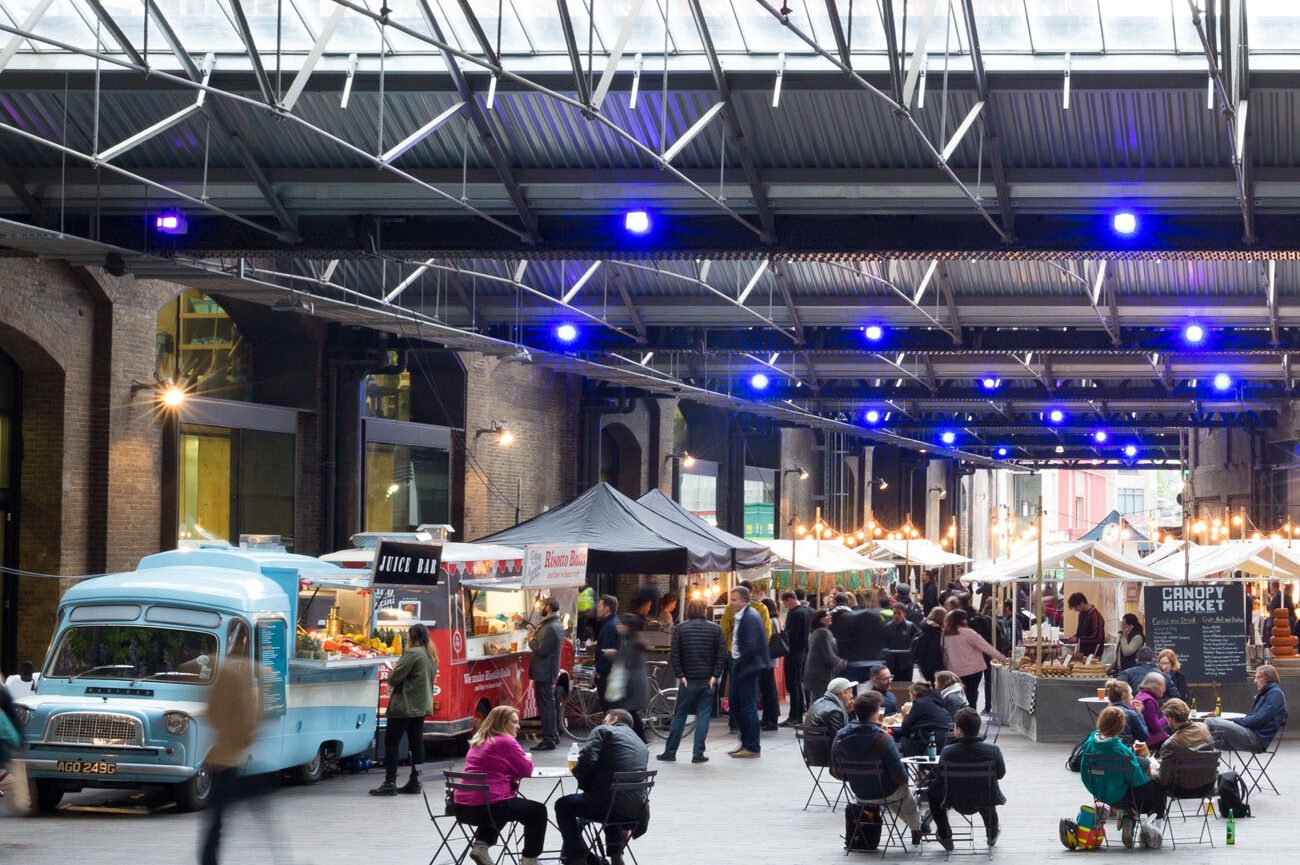 Canopy Market takes the best wine bars, designers and street food traders, and puts them all under one gorgeous, restored Victorian glass and steel roof. On Fridays they stay open as a night market with live musicians, DJs, and craft beer bars, and you can peruse jewellery and homeware stands as you chow down on freshly-made pasta or Korean BBQ. 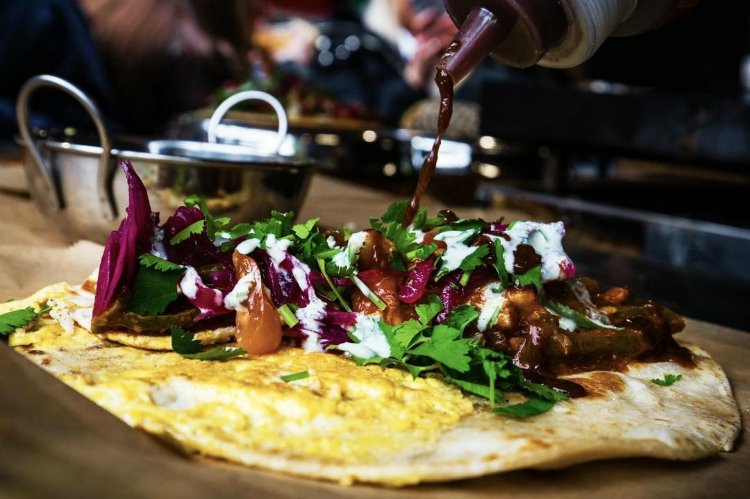 The first stalls set up shop here in 1974, and while it’s changed a lot recently under new owners, Camden Market’s food offering is still noteworthy – set up camp at the street food village overlooking the canal, or explore the cobbled passages to uncover Chin Chin ice cream made with liquid nitrogen; The Cheese Bar; and Rudy’s Vegan Diner. Plus, you can stock up on gin from the Half Hitch micro-distillery; posh pantry goods at The Camden Grocer; and rare-breed beef at Roadkill butchers – who don’t actually scrape their stock off the roads, but do source it all from ethical farmers. 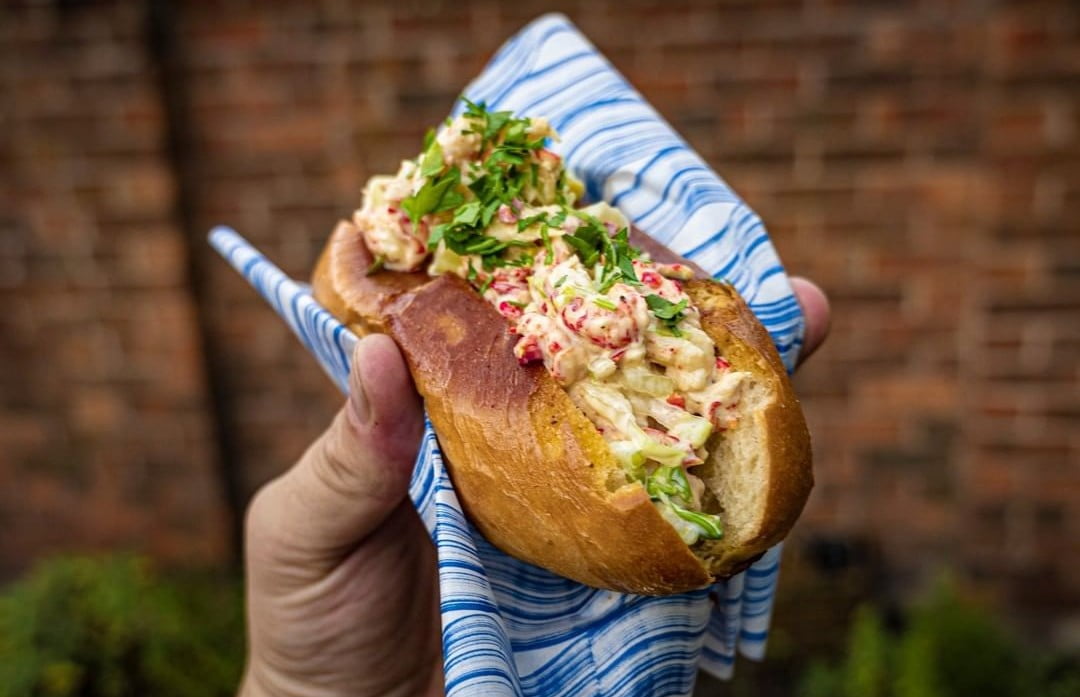 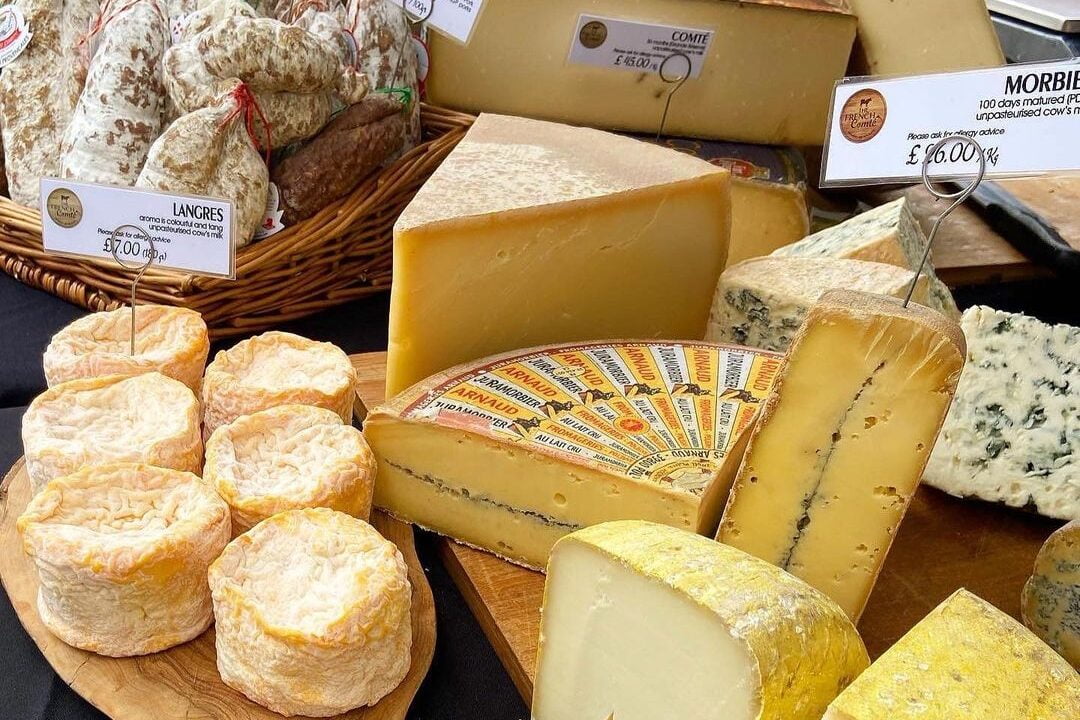 Fresh out of Portobello mushrooms? Well, you can restock at this new food market just off Portobello Road. Aside from fresh produce from award-winning farmers, you can scoop natural wines from Wingnut Wines, doughnuts by Crosstown, and four different ages of comté from France – and peruse stalls from not one but two Michelin starred chefs. The Square’s Phil Howard is here hawking his cook-at-home pasta boxes, while former Leroy chef Sam Kamienko is selling his hit lockdown bagels. Plus, there’s live music, hot street food, and lifestyle stalls, too. As unpretentious as they come, Fulham’s North End Road market is run by locals, for locals. That doesn’t mean it doesn’t have plenty to boast about, though – aside from stalls hawking a cornucopia of fresh fruit and veg, you’ll also find a thriving street food scene with stalls representing cuisines from all over the world. It’s also blessed with a considerable number of vegan stands, too, and the whole market’s nearly plastic-free.


Like discovering things to do in London? Peruse your monthly agenda for unmissable pop-ups, culture and more