London has a museum for pretty much everything.

So consider this your own personally curated collection of all the best museums in London – covering the realms of flora, fauna, design, science, history and culture. Amongst its treasures, London has the most visited modern art gallery in the world; the original manuscripts of Charles Dickens, Virginia Wolf and Jack Kerouac; mummies; 2300 artworks tracing the complete development of Western European painting; a museum dedicated solely to the tube system of London; flight simulators; earthquake simulators; and homages to the world’s finest thinkers in restored Georgian townhouses.

So behold, our picks of the best museums in London –
– 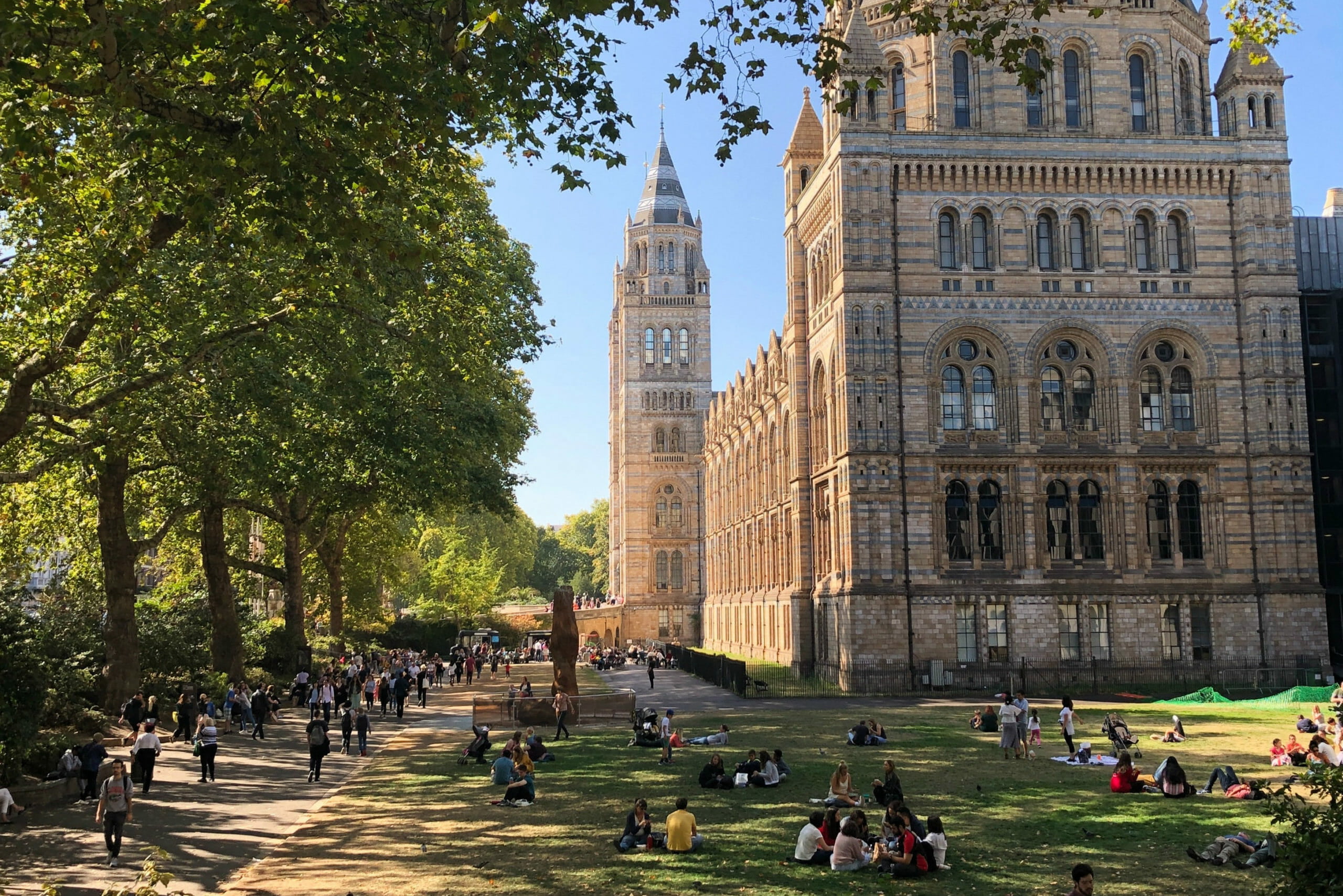 London’s landmark animal and natural phenomena museum displays a rotating collection of approximately 22 million insect and plant specimens, the UK’s most prodigious dinosaur display, an escalator ascending into the core of Earth itself, and most importantly, a life-sized model of a foetus in a womb. Which means you can also observe unsuspecting parents having ‘the talk’. READ MORE

Wildlife Photographer of the Year | Until 31st May | £13.95
Just to be clear, this showcases photographers OF wildlife, not photographers that ARE wildlife. Nevertheless, it’s one of the most exciting annual exhibitions in London, and it’s back this month. READ MORE 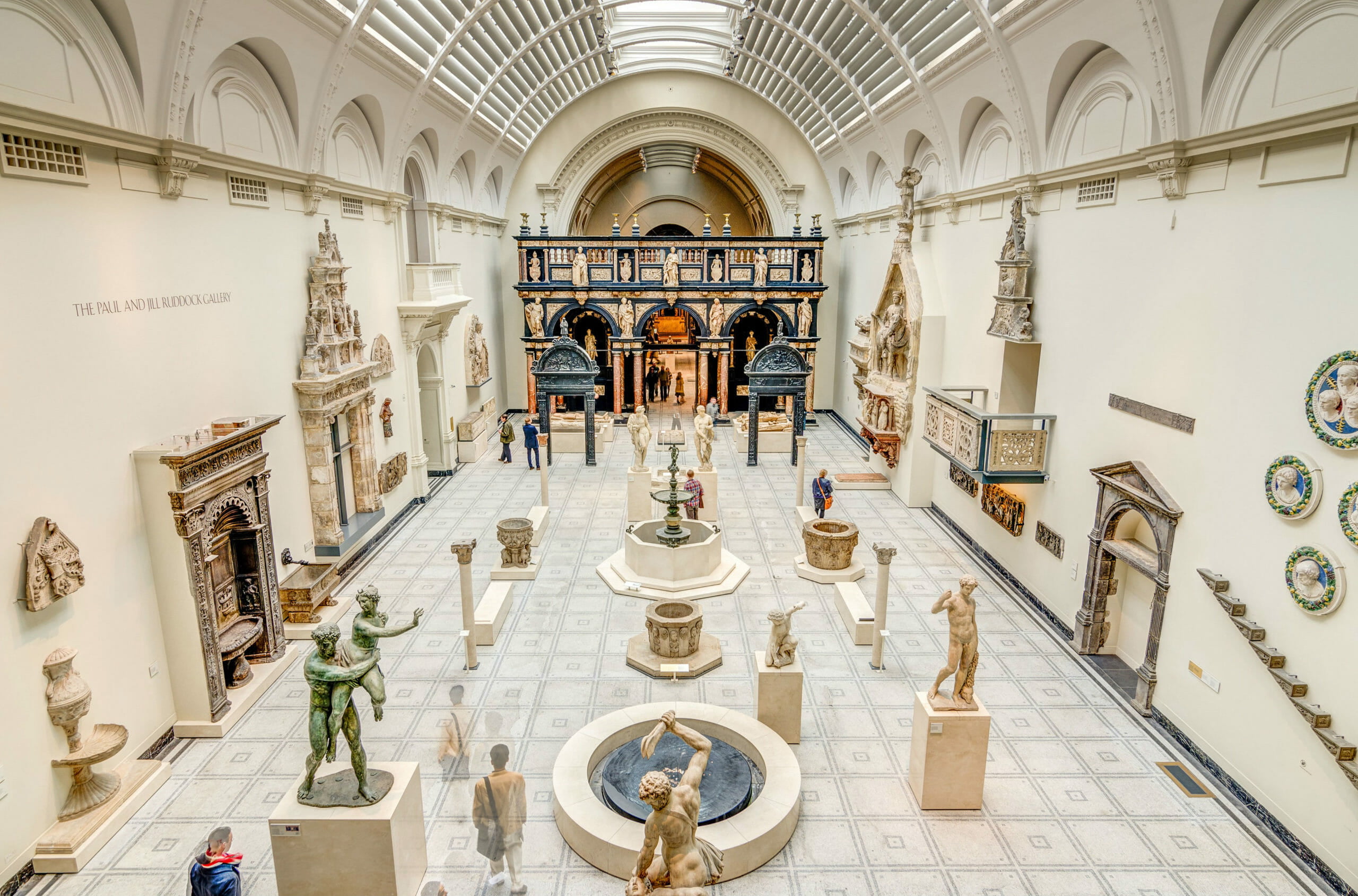 Not just one of the best museums in London but also the world’s largest collection of decorative arts and design, the V&A is comprised of more than 150 separate galleries over seven floors of furniture, ceramics, sculpture, paintings, posters, jewellery, metalwork, glass, textiles, dress, architecture and photography spanning several centuries. Plus it’s home to the beautiful William Morris tearoom and a water-filled courtyard; both excellent spots for a scone break. READ MORE

V&A Lates: The V&A was originally open late to tempt the public towards culture instead of the gin palace. Nowadays, they open their doors on the last Friday of every month (except May & Dec), with DJs, performance artists, talks, workshops and screenings… and gin.


Cars: Acclerating The Modern World | Until 19th April | £18
An insight into the impact of cars on the world and society over the last century, featuring futuristic car designs; 1920s fashions influenced by driving; and plenty of iconic cars to coo over.

Kimono: Kyoto to Catwalk | 29th February – 21st June | £18
Set to be another landmark exhibition for the V&A, this show considers the aesthetic and social impact of the traditional Japanese kimono over the past 400 years, from authentic Edo period outfits to 1920s Parisian coats and Obi-Wan Kenobi‘s costume. 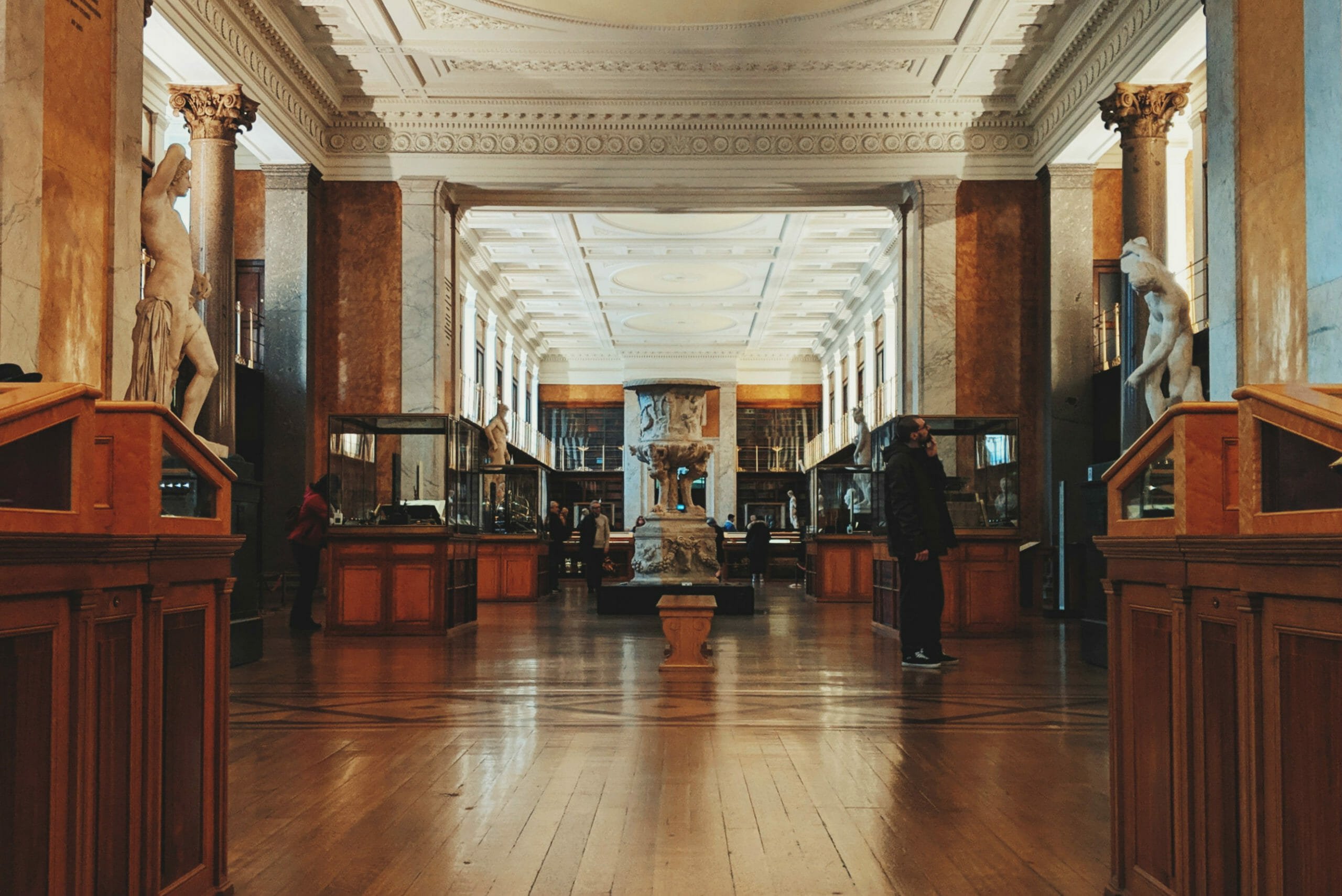 One of the world’s oldest museums of history and culture, grown from the collection of one man who was interested in everything. Exhibitions include abstractions like life and death and showcases of Ancient Iran, the prehistory of Europe, the Middle East, the Rosetta Stone, Lindow Man, the Lewis Chessmen and the Sutton Hoo ship burial. And mummies. They have mummies. READ MORE

Troy: myth and reality | Until 8th March | From £20
Paintings, sculptures and artwork inspired by the 3,000 year old legend of Troy, alongside archeological evidence that suggests the fabled city may really have existed. 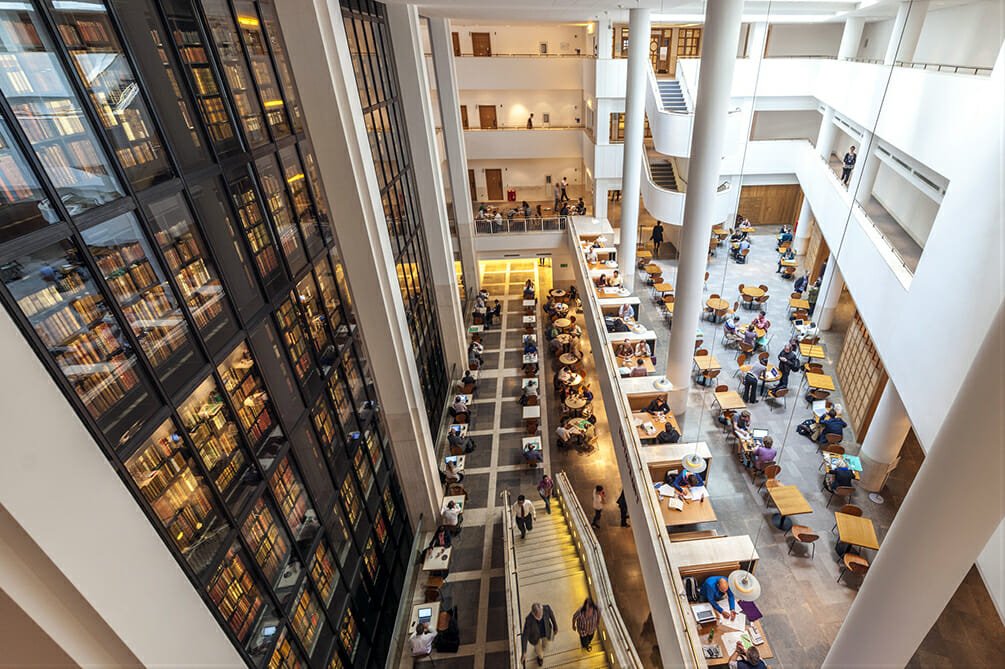 170 million items and 330 miles of shelf space make this not only one of the best museums in London, but also one of the biggest. It also hosts regular, curated exhibitions based around its rare collections; including displays of the original manuscripts of Charles Dickens, Virginia Wolf, Jack Kerouac, Lewis Carroll and varying instalments of maps, sacred texts, newspaper and sound archives. 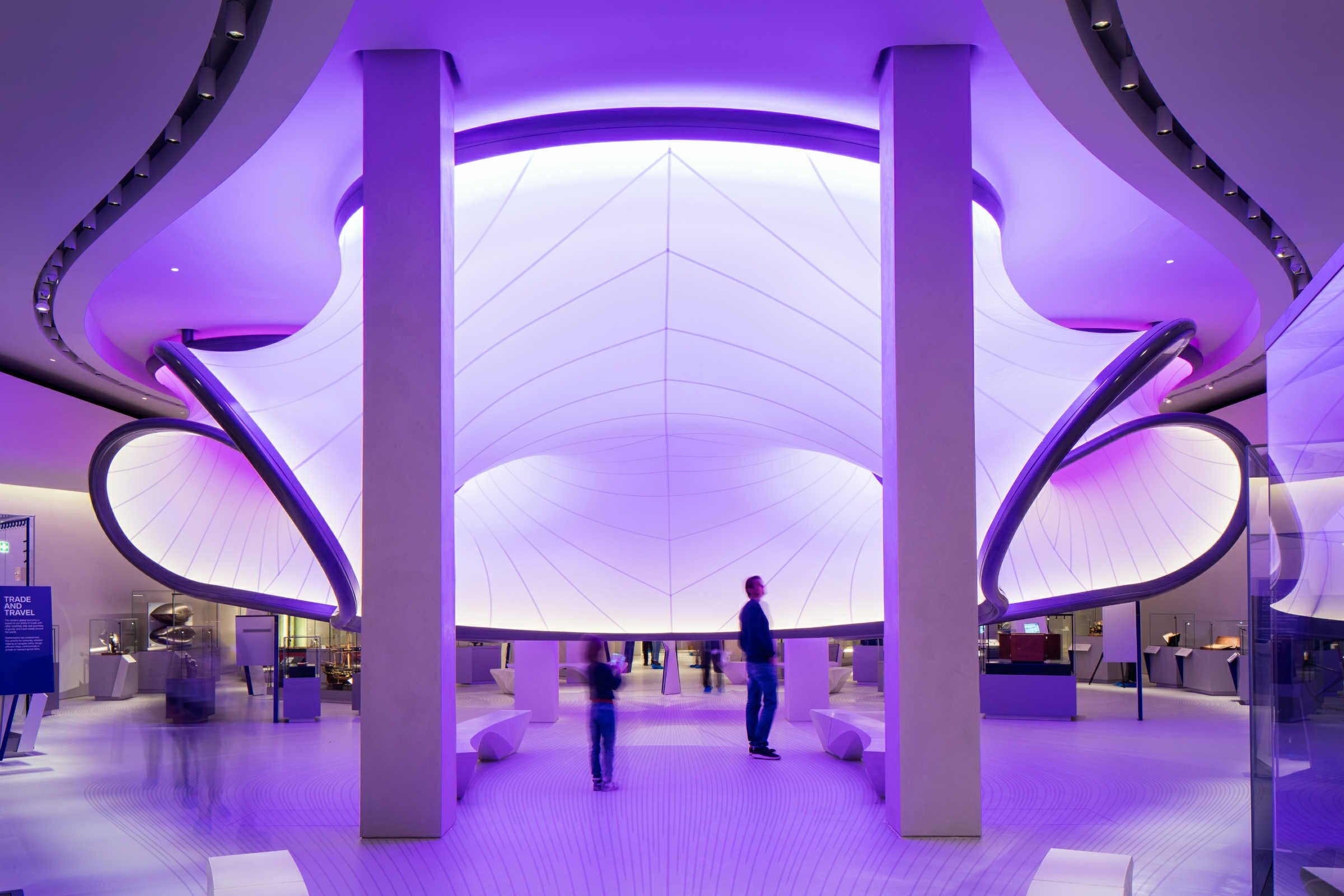 Love this place. That’s an order. Because it’s filled with everything you know about, but probably don’t really know about. Like exhibitions on space exploration with the Apollo 10 command module; a flight simulator; a three-metre-high, 600kg Spacelab 2 X-ray telescope; an immersive VR descent from space with astronaut Tim Peake; and displays on developments in contemporary psychological science, medicine, climate and 3D printing. And an IMAX theatre. Thank God for Science.

Driverless: Who Is In Control? | Until October | Free
A free exhibition showcasing some of the early prototypes of driverless cars, drones and submarines…

Medicine: The Wellcome Galleries
This newly unveiled gallery is the permanent home of the bizarre and occasionally gruesome artefacts once housed in the Wellcome Collection. Combined with some of the Science Museum’s own medical treasures, there’s over 1000 objects here, from the mould that led to the discovery of penicillin, to robotic surgical equipment. 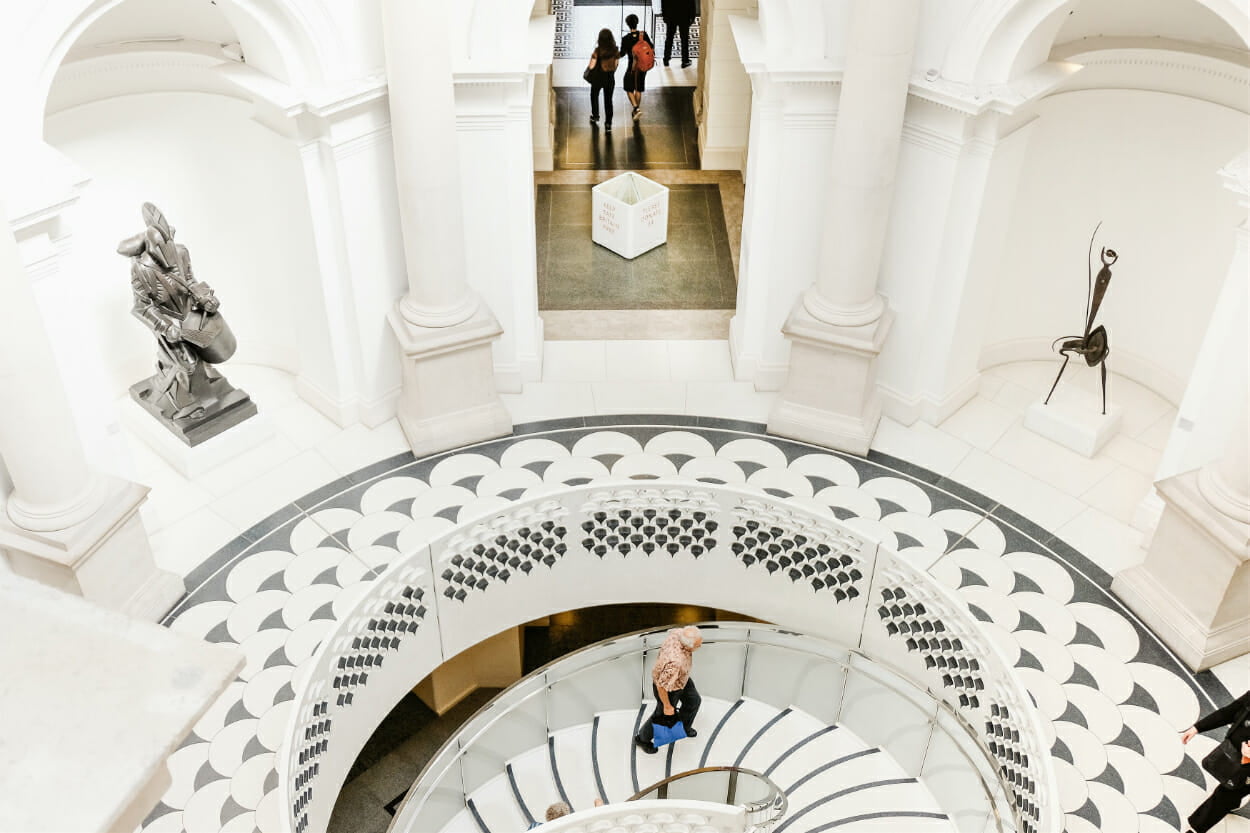 A temple to the work of British artists over the past 500 years, with a vast collection of Pre-Raphaelite paintings, two rooms of Henry Moore sculptures, a free picture library filled with rare and fragile sketches from major artists, and a restaurant with a mural by Rex Whistler.

Late at Tate Britain: On the first Friday of every month, Tate Collective Producers curate an evening exploring a different abstract theme, with a little help from DJs, activists, artists and more.

Aubrey Beardsley | 4th March – 25th April
Beautiful black and white illustrations by the Victorian artist, who created a distinctive and iconic style before his untimely death from tuberculosis at just 25. 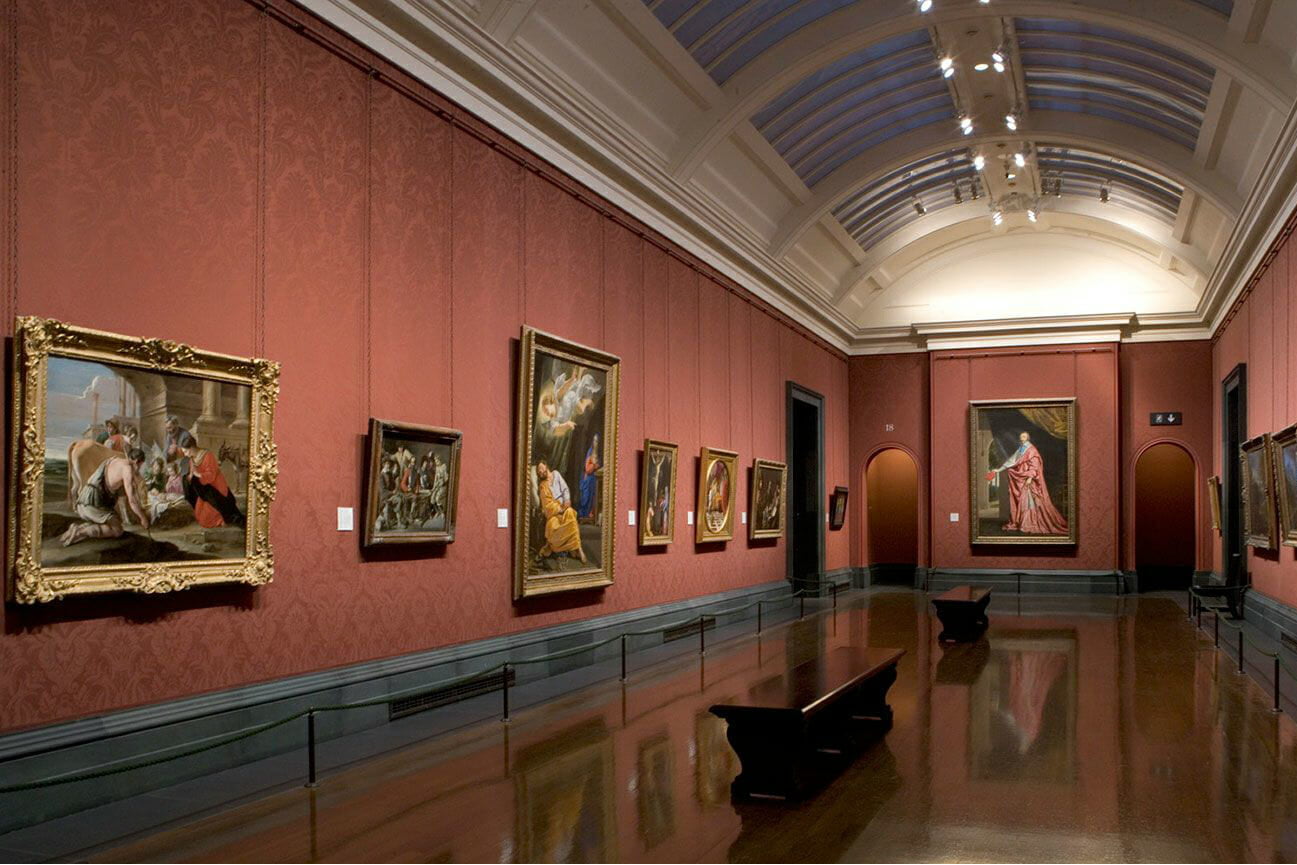 1824: The première of Beethoven’s Symphony No. 9; the Egyptians capture Crete; ‘New Holland’ becomes ‘Australia’; some government guys in Britain bought 38 paintings. Now: Beethoven’s no longer in the charts, Australia still has an identity crisis, and The National Gallery has over 2,300 works tracing the complete development of Western European painting from virtually every European school of art. And a café. READ MORE 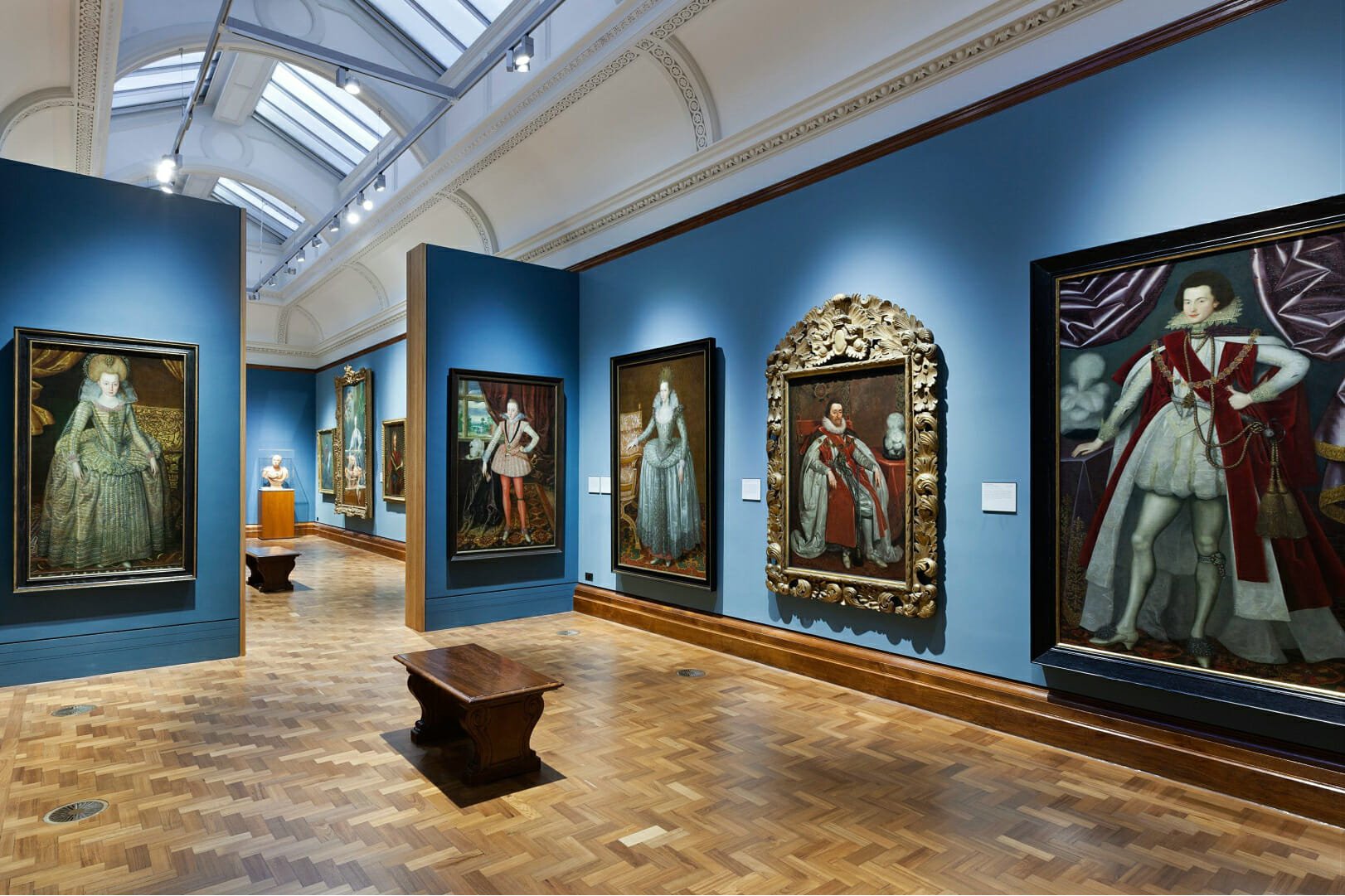 Adjoined to the National Gallery, the NPG specialises in faces through the ages. Also housing paintings by era, you can start with the flamboyant ruffs and frills of the Jacobeans and work through to the gritty, photorealistic images of contemporary artists, celebrating ordinary people.

NPG Lates: Every Friday until 9pm, with music, drinks, film screenings, talks, and drop-in life drawing in the galleries.

David Hockney: Drawing From Life | Until 28th June | £18-20
A critically acclaimed exhibition bringing together over 150 sketches and drawings by the distinctive British artist, including a selection of self-portraits from a two-month period where he drew himself every day.

OPENING SOON: Cecil Beaton’s Bright Young Things| 12th March – 17th June | £18-20
A must for any Gatsby fans: a collection of Beaton’s glamorous, evocative photographs of socialites and high society partygoers in the roaring 20s and 30s. 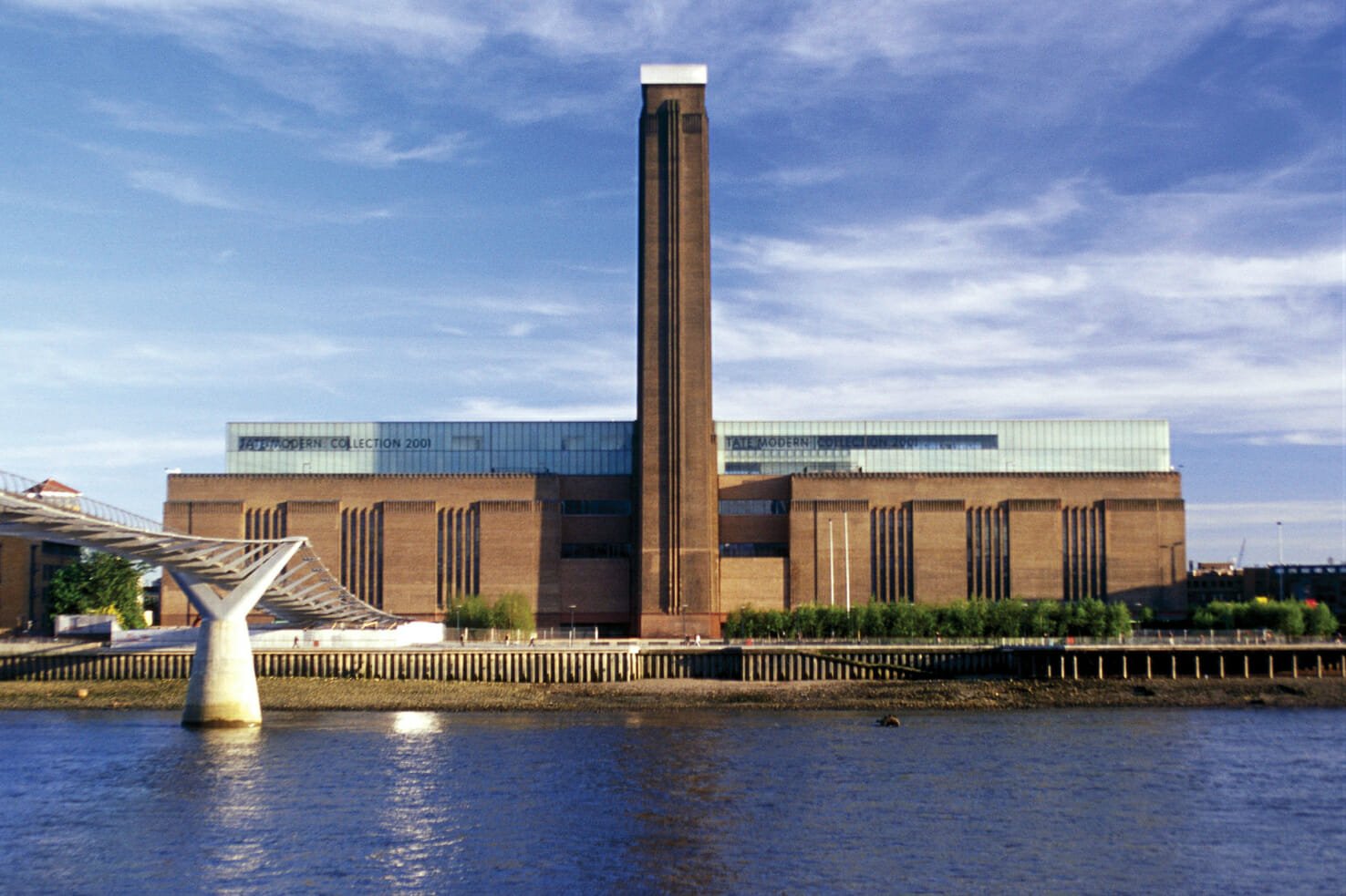 The most-visited modern art gallery in the world, partly because it holds the national collection of British art from 1900 to the present day, as well as international modern and contemporary art, but mainly because the 6th floor members’ cafe has one of London’s best views. Which is like art in itself, man. READ MORE

Dora Maar | Until 15th March | £13
A stunning collection of photographs taken in the 1930s, from candid shots to surrealist photomontages.

Steve McQueen | Until 11th May | £13
The first major exhibition of the award-winning artist and filmmaker’s work in over two decades, in which you’ll follow gold mine workers down the shaft and hear McQueen’s cousin speak about the day he accidentally shot his own brother.

Dóra Maurer | Until 5th July | Free
A year-long retrospective of the Hungarian teacher and multidisciplinary artist. 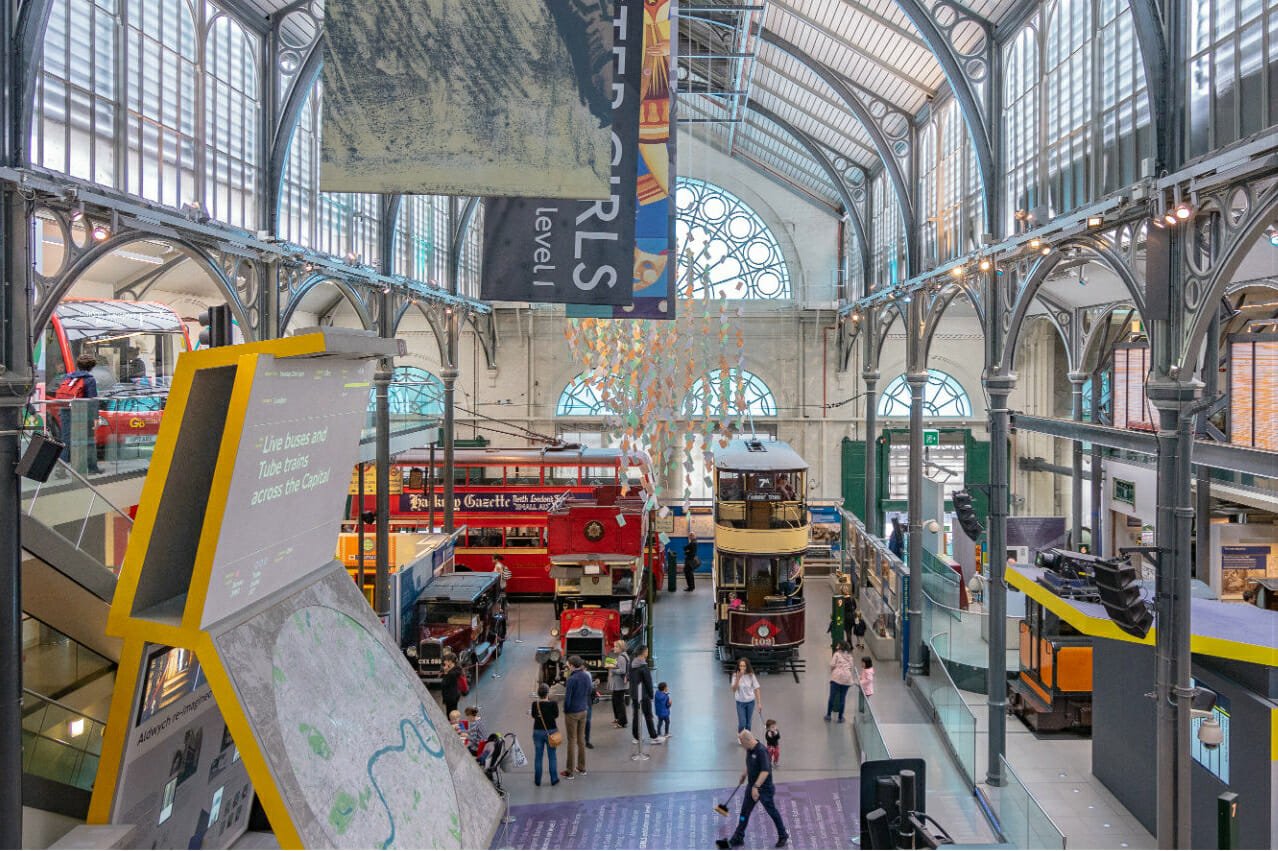 One of the best museums in London about London, LTM traces the history of London’s Tube, Bus and Cab systems, and equally as importantly – considers its future. READ MORE

LTM Lates: A series of late-night themed openings during which you can explore the exhibitions, take part in workshops, and listen to experts and speakers while sipping cocktails.

Hidden London | Until January 2021 | Admission included in entry fee
A treasure trove of objects, old posters, photographs and salvaged architecture from secret spaces hidden below the streets as part of the Underground, inspired by TfL’s Hidden London tours. Like exhibitions? Check out what’s currently on at every art gallery in London

53 Amazing Outdoor Restaurants In London Feeling a little al fresky? Well step this way, allow us to top up your rosé and please feel the warmth of the sun on your face at one of these fine open air dining establishments.

Best Restaurants In West London The best in the West….

Your Guide To The Best Tacos In London A hand-picked, pickled slaw-topped selection of the finest taco spots in London.

Best BYOB Restaurants In London For those occasions when you just feel like eating exceptional food and drinking exactly the type of wine, or beer, or spirit, or any form of liquid that you want. Which is probably all the time.