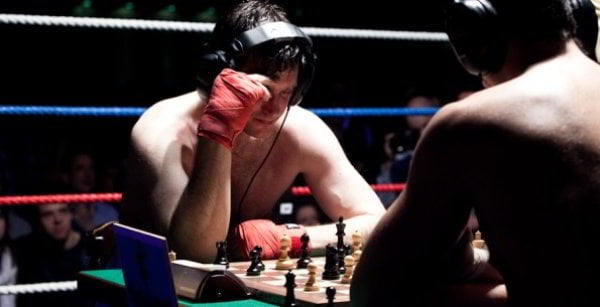 There are standard answers to the questions, “how many squares are there on a chess board?” and “which event at the Royal Albert Hall am I thinking of?”.

The answer to the first is usually “Two, facing each other”.

And the answer to the second is usually “Erm… how can I guess that? This is silly. Ok, shut up…. No? Yes, this is impossible. But I’m going to guess… ok…um….the Proms?”

But today, both of these answers would be wrong.

Because Chessboxing – the world’s fastest-growing hybrid sport – has landed itself a gig at the RAH, where bouts will combine chess and boxing in order to produce “a strategic, tactical and hard-punching melange of fast-moving entertainment and physical courage”.

There are four bouts scheduled, featuring some of the finest Chessboxers from around the world – from the UK’s Number 1 heavyweight Andy ‘The Rock’ Costello to Lithuania’s “Pocket Dynamo” Vladimir Agasaryan – as well as a live cabaret show and DJs.

Though standing tickets are available at £25, you’d probably rather a pair of VIP tickets with ringside seating, access to a private bar and complimentary Hendricks’s gin cocktails…

…so we have two pairs to give away.

Take your clone along, and knock yourself out.

To win one of 2 pairs of VIP Ringside Tickets to Chessboxing at the Royal Albert Hall’s Loading Bay on 10th October 2012, just click on the red button on the right.

THIS COMPETITION IS NOW CLOSED, AND THE WINNER HAS BEEN ANNOUNCED ON OUR FACEBOOK PAGE

The 2 winners (of a pair of VIP tickets, each) will be selected on 29th August 2012, and announced on our Facebook Page.

Prize may not be exchanged for anything else, but may be assigned to a friend of your choosing if you can’t make the event.

Like interesting days out and quirky experiences in the city? Check out our guide to the very best of what’s on in London.