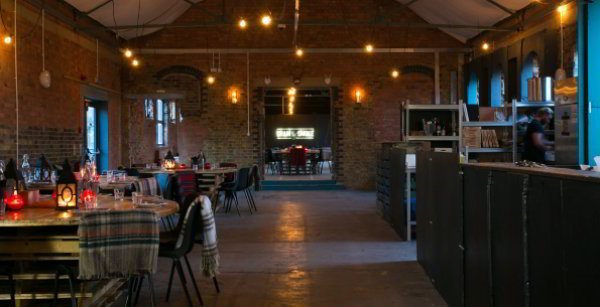 The greatest Scottish inventions include….

….the bicycle; the telephone; the adhesive postage stamp; the television; the bank machine and PIN system; the refrigerator; the postcard; the game of golf; the toaster; the modern lawnmower; the BBC; the freaking lunar calendar; and cullen skink.

That last one’s usually a thick Scottish soup (from the town of Cullen) made of smoked haddock, potatoes and onions… however Scottish pop up maestros Dram & Smoke have decided to embrace the Scots’ reputation for innovation by making it even thicker, turning it into a mousse and serving it up as the first of five courses at their Spring Project.

The inventor of penicillin’s got nothing on these guys.

Their Spring Project (which launches tomorrow inside a repurposed sofa factory with views over the Olympic Park) features an assortment of booze-friendly sporting activities – from table tennis with tartan bats and indoor shuffleboard, to Cornhole and Beer Pong, played inside a dedicated Beer Pong room – which have little to do with Scotland, beyond the fact that Scots love booze-friendly sporting activities.

You can expect to be served five courses, family-style, from their custom whisky barrel smoker: the aforementioned Cullen skink mousse with oatcakes; onion broth with peas and crowdie cheese, served in cafetières; potted duck with tattie scones and marmalade; salt-baked lamb shoulder; and lemon hot toddy tarts for dessert…. all washed down with beer, wine and “iced whisky slushies”.

Pretty sure the Scots invented those, too.