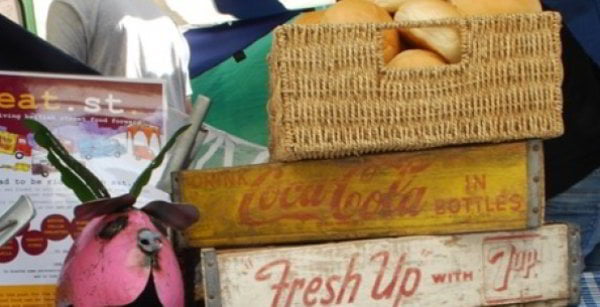 Eat St at The Imperial Arms | Chelsea Pop Up Restaurant

Imagine London upside-down, back to front and inside-out.

It’d be a place where Gucci-clad, Chihuahua-toting Russian dolls – dripping in Bvlgari and teetering on 7 inch Louboutins – would shun Knightsbridge for the boutiques of Peckham; a place where East London’s hottest street food vendors would depart Shoreditch en masse in order to set up shop in Chelsea.

Except for the bit about Russian women shopping in Peckham: totally just made that up.

On Friday and Saturday nights throughout the spring and summer, Eat St’s residency will see food served in the pub’s garden by a rotating cast of some of London’s biggest street food names including (but not limited to) Big Apple Hotdogs; The Rib Man; Anna Mae’s; Bhangra Burger and Pizza Pilgrims.

Midweek The Bowler will be serving up their famous meatballs, and the Arms is also currently showcasing contemporary photography from The Little Black Gallery.

To all those West Londoners who have been wondering why the street food / pop up thing only ever happens in East London: this one’s for you.

And to everyone else: um, it’s for you too…

Enjoy pop up dining experiences? Check out our guide to the best pop up restaurants in London.