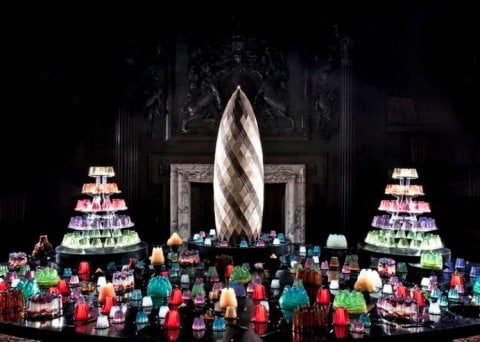 The Experimental Food Society exhibition heads to the Truman Brewery on 21st  and 22nd October and tickets are available now, in exchange for a mere £5.

The two day exhibition aims to showcase the not inconsiderable talents of the Society’s head-spinningly creative members, who include “jellymongers” Bompas & Parr; Buttervilla Funky who grow unusual edible flowers and plants; and Professor Roland Rotherham – an expert in historical dining.  Teatime Production, another member, are the outlandish dining conceptualists behind the recent “Futurist Aerobanquet” project on which guests were taken on to a plane with air stewardesses and cabin service, before disembarking to dine on a menu taken directly from Marinetti’s Futurist Cook Book. The evening apparently culminated in a simulated plane crash and emergency evacuation, at which point a vintage ambulance arrived – sirens blazing – in order to serve pudding…

At the exhibition you’ll be able to meet the pioneering gastro-creatives behind some of the least likely foods imaginable: the types of edible delight that even Willy Wonka – one of the original food experimentalists, and a certified bampot – was unable to create.  In addition there’ll be talks, demonstrations and interactive exhibits.

If you’re keen to enjoy more than just the exhibition, then £60 tickets are also available for a “wild” themed banquet at the Folly on Sunday 23rd October, which will feature even more culinary oddities, a food cabaret and a variety of surprises that are still being kept under wraps by the organisers.

Like quirky experiences and alternative entertainment? Check out our guide to the best of what’s on in London.

100 London Date Ideas Just an epic list of London date ideas for you, updated for these unprecedented times...

The Other Art Fair It’s time to begin building your enviable collection of mind-bogglingly expensive art. And the best way to do this is to pur...

See A Classic Movie In A Beautiful Gothic Church Complete with a live choir…...